People put their fists in the air during a rally for Black and Asian solidarity at George Floyd Square on Sunday in Minneapolis. Photo: Evan Frost | MPR News

Protests and rallies calling for justice after the fatal police shooting of Daunte Wright continued for an eighth day Sunday around the Twin Cities.

There was a march and rally near the Governor's Residence in St. Paul, and a rally with a lengthy lineup of music and dance performances at George Floyd Square in Minneapolis. 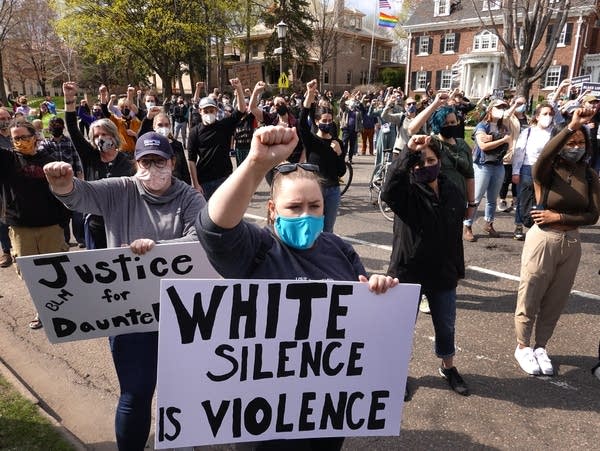 Demonstrators gather outside the Governor's Residence for a rally and march against police brutality on Sunday in St. Paul. Marchers called for justice for Daunte Wright, who was fatally shot by police in Brooklyn Center a week ago.  Photo: Scott Olson | Getty Images

And people returned to the street outside the police department in Brooklyn Center, the city where Wright was fatally shot during a traffic stop a week ago.

Sunday night's protest drew a smaller crowd in the wet, blustery conditions, with another curfew in place starting at 11 p.m. It came at the end of a weekend that saw a police crackdown and dozens of protesters arrested on Friday night, and a calm night without confrontations on Saturday.

Sunday afternoon's event at George Floyd Square was called the "Black & Yellow Asian Solidarity Rally," and promoted unity among Asian and Black communities as each face traumatic events: the killing of Wright; the ongoing trial of Derek Chauvin for the killing of George Floyd; and a spike in violence directed at Asian communities, including last month's mass shooting in Atlanta.

The event included a lineup of speakers and performances from both communities. TaikoArts Midwest gave a Taiko drumming performance, Agape Minneapolis hosted a cookout, and numerous speakers took the microphone, including family and friends of people killed in interactions with the police.

To see the original report and read related articles, follow this link to the MPR News website.  https://www.mprnews.org/story/2021/04/18/protests-calling-for-justice-for-daunte-wright-continue-for...