The Thunder Bay Community Economic Development Commission is looking at the possibility of bringing fish farming to the north shore of Lake Superior.

The commission recently released a feasibility study on aquaculture in the region, with the report finding that rainbow trout farming could be viable in at least three different locations between Thunder Bay and Nipigon Bay.

Study project manager Jamie Lee Yawney said as part of the economic development commission's strategic plan, they examined aquaculture, as it is one of the fastest growing food production sectors in the world.

"Our report provided an overview of the availability of potential markets and specific references to within a 15-hour drive," Yawney said. "Our report notes that there is about nine to 10 million potential seafood consumers."

Aquaculture in Ontario is conducted with either land-based systems which can include ponds, raceways or circular ponds, or is water based and uses pens or cages.

The three areas in Lake Superior that were examined as potential pen sites were Nipigon Bay, Black Bay, as well as the Pie Island and Victoria Island area south of Thunder Bay.  All three locations were identified as suitable, but Nipigon Bay is considered the preferred site.

The study said the Ontario aquaculture sector has been the leading producer of freshwater farmed fish in Canada. Ontario farms produced more than 7,000 tonnes of rainbow trout having a farm-gate value above $30 million. Lake-based, net-pen production accounts for 85% of the total production. 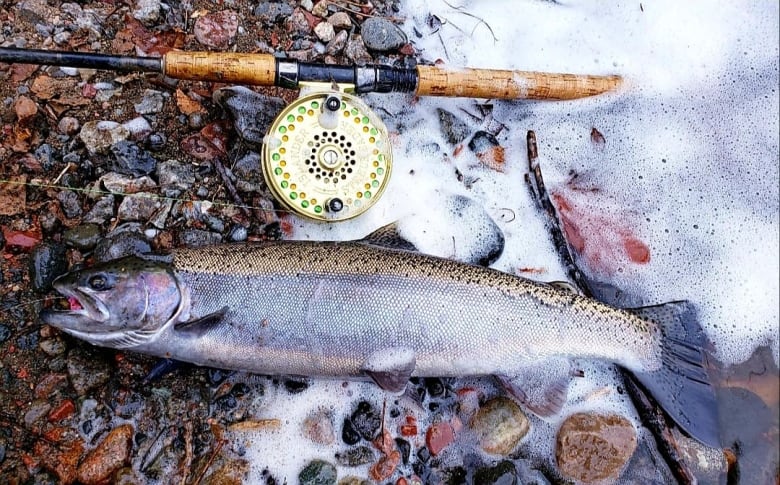 Rainbow trout were introduced 130 years ago but have become naturalized in Lake Superior. They run up tributaries of the big lake each spring to spawn. Hundreds of anglers seek the hard fighting fish.  Photo: Gord Ellis/CBC

"So such factors include the requirement to have a minimum depth of 10 to 20 metres and protection from strong winds and waves," said Yawney. "And it has to be five kilometres away from any municipal [and] industrial intakes and discharge."

Yawney said the aquaculture industry has been established since 1960 in Ontario, and said there are many regulations and agencies, "to ensure we keep our environment safe when it comes to this industry." She also said a number of fish were examined as having potential for aquaculture, but it was rainbows that came out on top.

"I was surprised that rainbow trout was the one selected," said Yawney. "And it's great to hear that there's a demand in the market and we can fit right in."

What if they escape?

But at least one group is concerned.

Tom Whalley, the president of the North Shore Steelhead Association in Thunder Bay, said many club members are worried about what would happen if farmed trout escaped into Lake Superior.

"I guess our concern is what impacts might occur with the escapement of a penned, domesticated stock into this environment," said Whalley. "And what risks might there be if they escaped and interacted with the native populations?"

The study noted rainbow trout have been domesticated to a large extent, and many hatcheries specialize in maintaining brood stocks and produce eggs and fingerlings for sale to grow-out operations. Two companies in the United States supply about 70 per cent of the eyed eggs to the Canadian industry.

Whalley noted that although rainbow trout — also called steelhead — are an introduced species in Lake Superior, they have been naturalized in the lake for 130 years. He said the wild fish have adapted to the harsh environment and also provide recreation and tourism.

Whalley said he and his group would be less concerned about a land base aquaculture operation in the area, as it would have less potential for impact on the environment and fishery. He said his group would be bringing its concerns about possible penned aquaculture in the area to both the Ontario Ministry of Natural Resources and Forestry and and the Department of Fisheries and Oceans.

"We don't know the scale or scope of what is proposed as yet," said Whalley. "But we do feel there are significant risks that may be associated with this. And we certainly want to make sure they're well vetted before anything goes ahead."

To read the original story and se more outdoors reporting, follow this link to the CBC Thunder Bay website.  https://www.cbc.ca/news/canada/thunder-bay/lake-superior-fish-farming-study-1.5987925