Nurse Alicia Amundson loads a syringe with a COVID-19 vaccine on Monday at the Islamic Center of St. Cloud.  Photo: Paul Middlestaedt for MPR News

Here are Minnesota’s latest COVID-19 statistics, as of Wednesday:

A temporary pause in new Johnson & Johnson COVID-19 vaccine shipments means Minnesota’s vaccine supply won’t rise for another week or more, a setback to earlier hopes that vaccination rates would continue to accelerate through April. 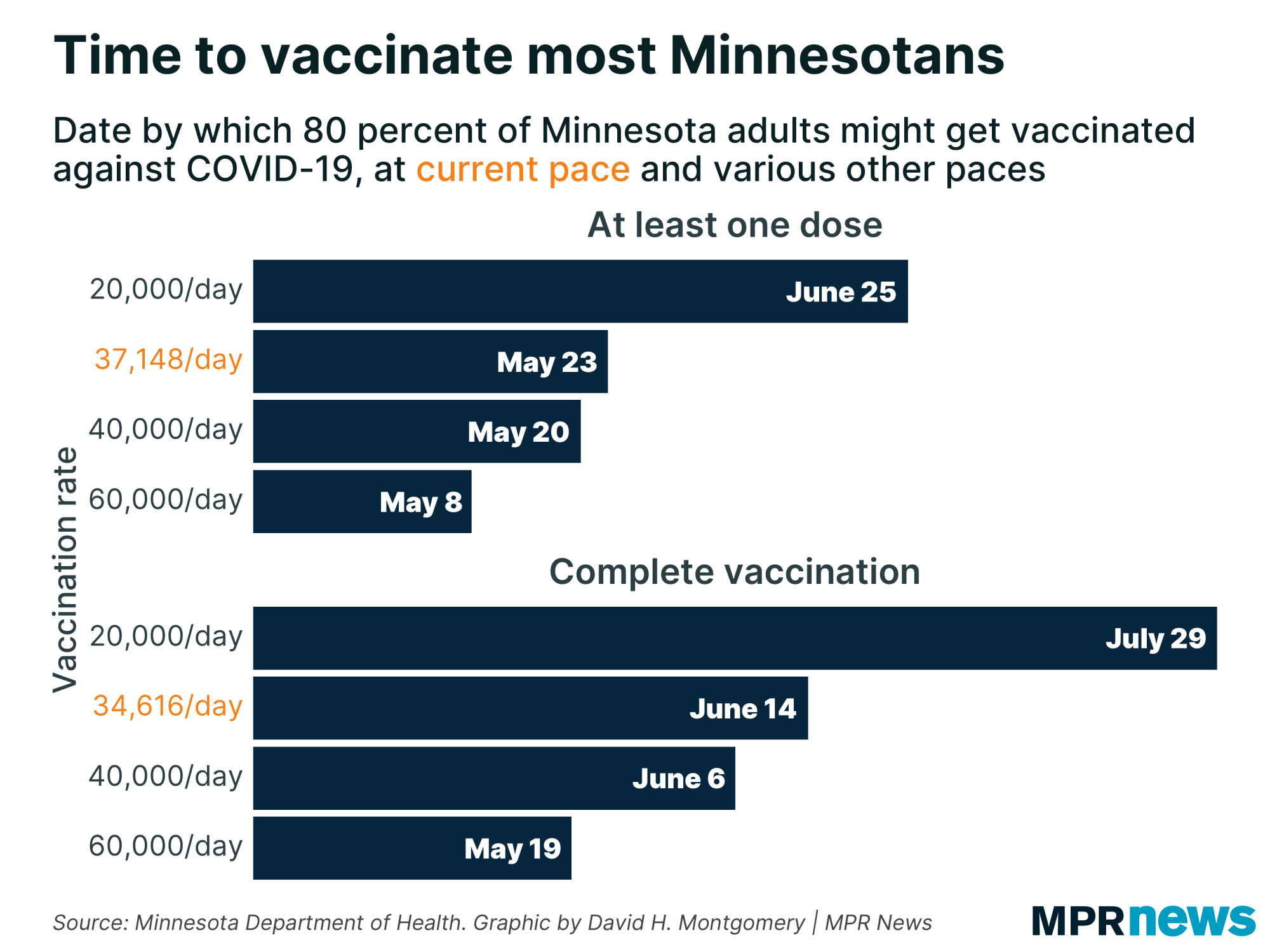 MPR News data reporter David Montgomery projects current vaccination data into the future to show when most Minnesotans would get vaccinated at various paces.

The clots have been found in six women — out of nearly 7 million vaccines given nationwide — between the ages of 18 and 48, and occurred six to 13 days after vaccination. Officials say they are not aware of any cases of blood clots occurring among the more than 184,000 state residents who have received the single dose vaccine.

Vaccination rates aren’t likely to accelerate any time soon. Minnesota is on tap to receive about 142,000 new first doses next week — about the same number it received this week. That’s enough to vaccinate about 20,000 new people per day, on average.

Before this week’s J&J pause and an earlier factory mishap, officials had been hopeful that a flood of new J&J vaccines would combine with existing Pfizer and Moderna vaccines to drive Minnesota’s vaccination rate to a new level.

The newest numbers still suggest the state may reach a hopeful milestone — half of adults with at least one vaccine dose — by the end of this week or early next.

About 33.1 percent of Minnesota adults are completely vaccinated; 48.3 percent have received at least one vaccine dose, including about 84.4 percent of residents age 65 and older, the state Health Department said Wednesday.

Minnesota reported about 1,700 new COVID-19 cases Wednesday, down from around 2,000 the week before. Overall the trend is still upward, but there are signs of a possible plateau.

The number of known, active cases has been trending upward over the past few weeks, with more than 17,000 as of Wednesday — marking more than three weeks with active daily counts above 10,000.

Minnesota’s overall pandemic death toll rose to 6,978 Wednesday. Among those who have died, about 62 percent had been living in long-term care or assisted living facilities; most had underlying health problems. 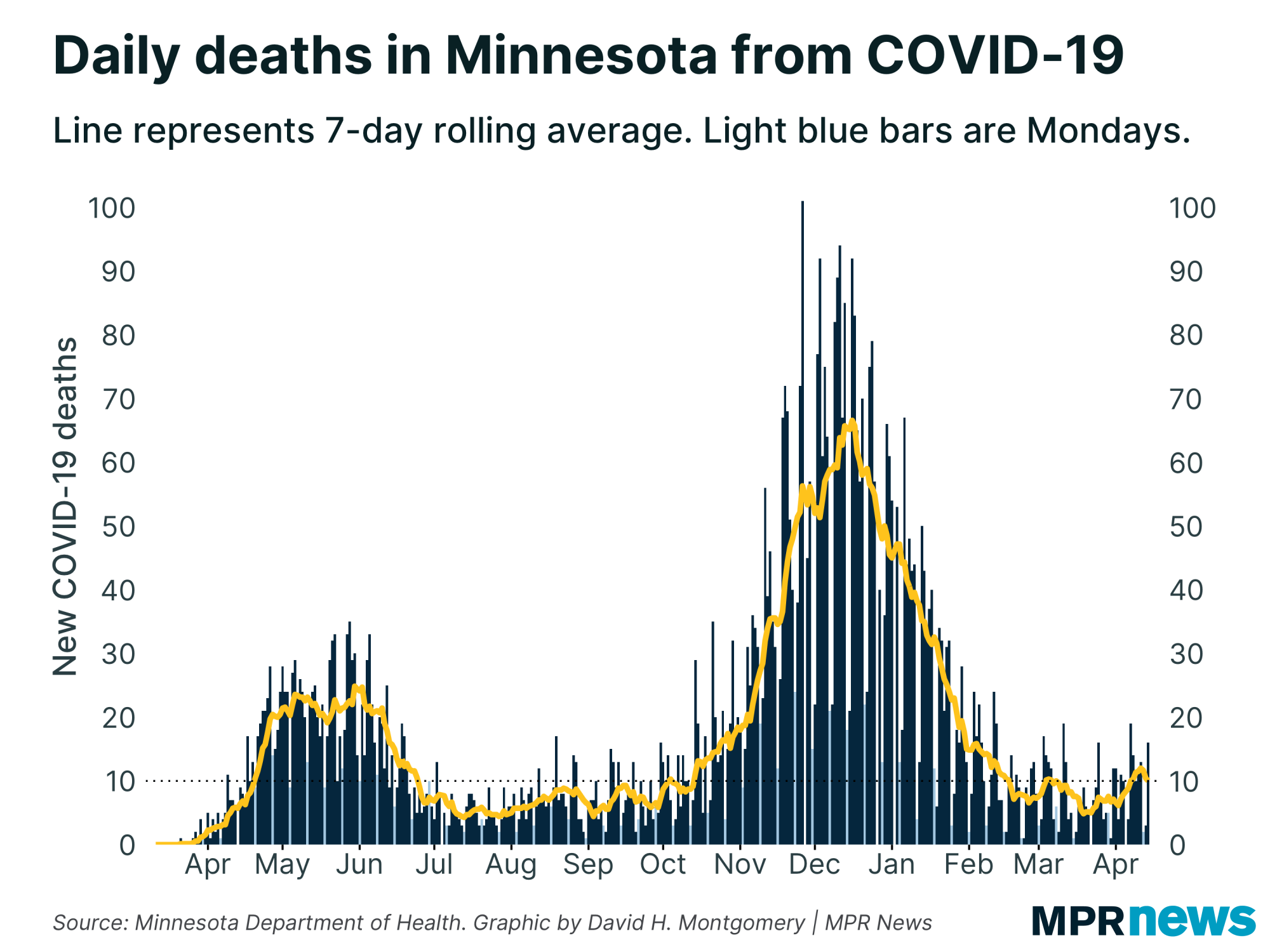 The state has recorded 547,101 total confirmed or probable cases so far in the pandemic, including 1,715 posted Wednesday. About 95 percent of Minnesotans known to be infected with COVID-19 in the pandemic have recovered to the point where they no longer need to be isolated. 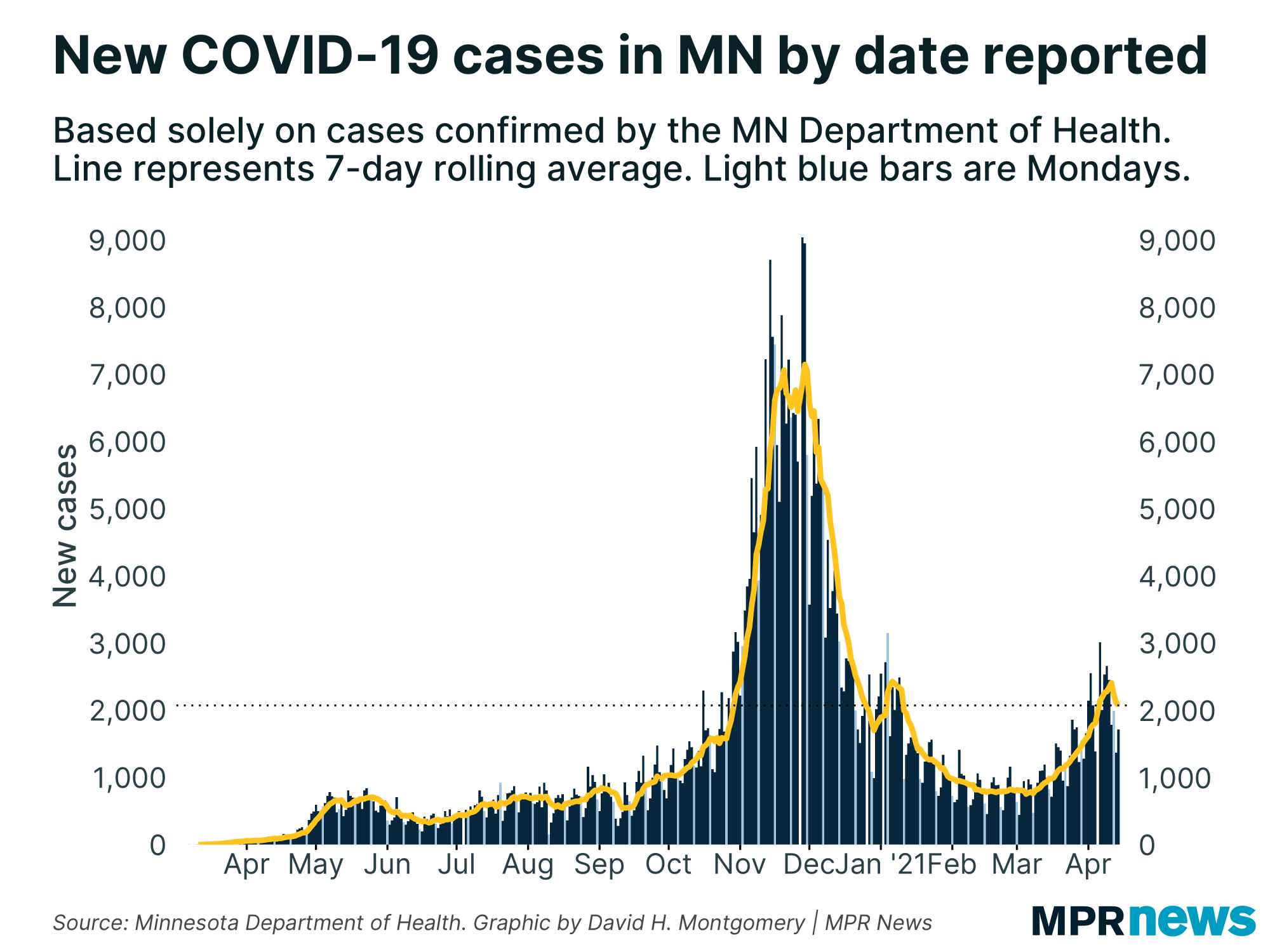 Hospitalizations have climbed significantly in the past weeks to levels not seen since January, and deaths tied to the disease are trending up, too. Health officials say coronavirus variants circulating in Minnesota are driving those increases. 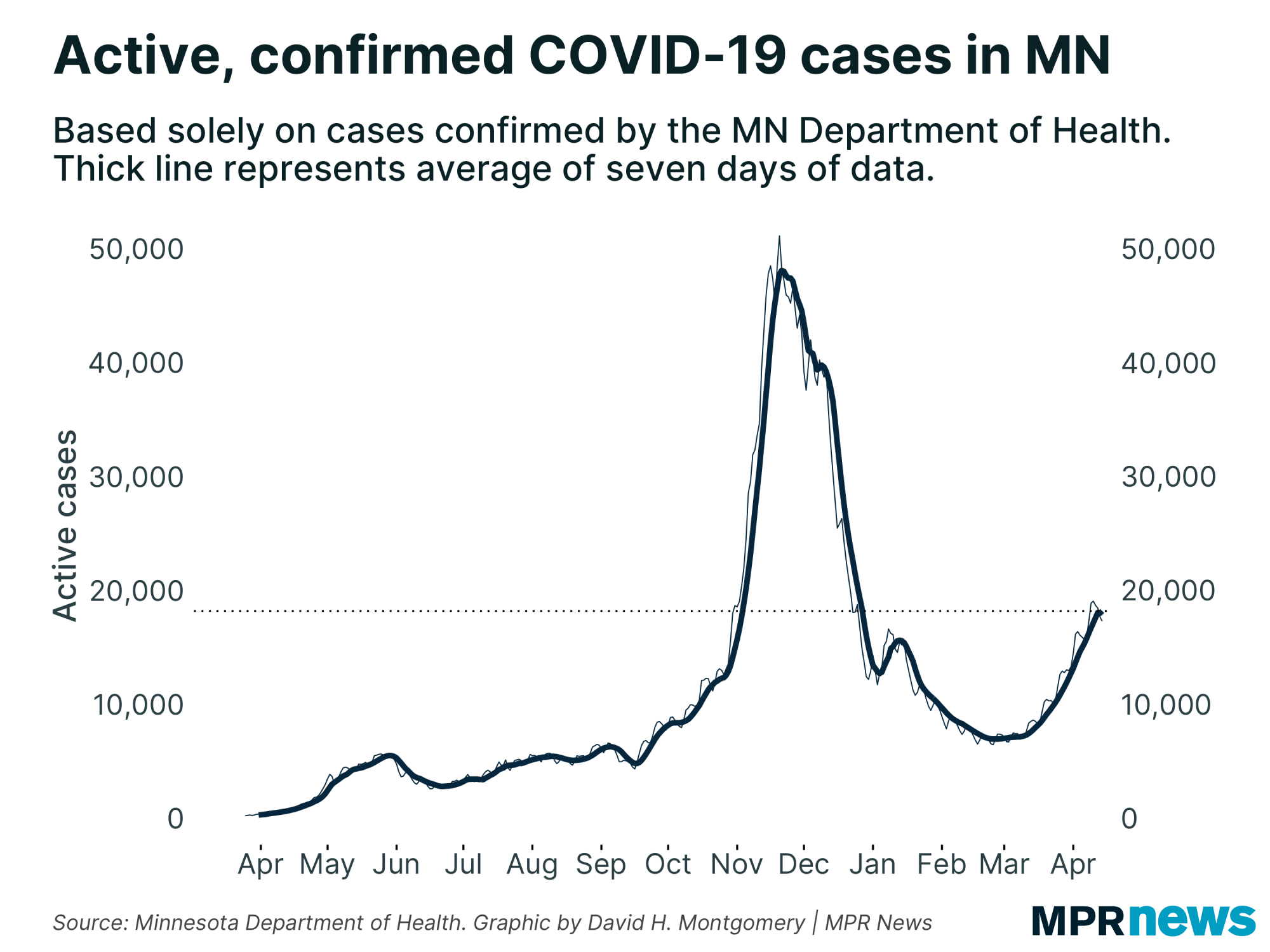 The state on Wednesday reported 681 people in Minnesota hospitals with COVID-19; 164 needed intensive care, hovering near the highest number of ICU patients since early January.

While the numbers are still low, when compared to late November and early December, the rising trend is notable, given the worries over the rise of the highly contagious B.1.1.7 variant — first identified in the United Kingdom — which state health officials have said they suspect is driving the current upswing. 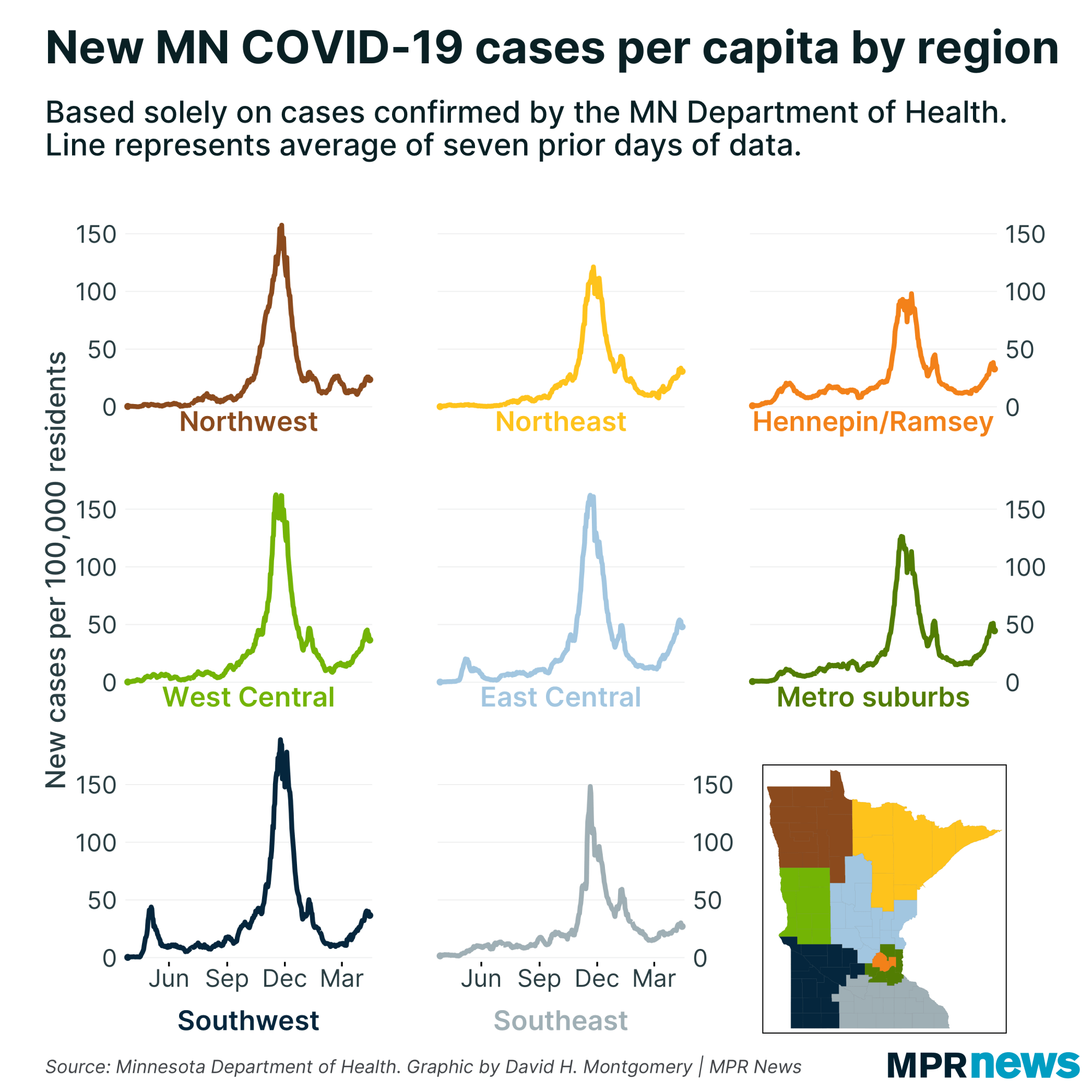 State health commissioner Jan Malcolm said recently that while the increase in cases is concerning, the growing number of vaccinated people in Minnesota means the state likely won’t see as steep a surge in cases of the scope seen in November and December.

The number of high school-age youth confirmed with the disease has grown, with more than 43,000 total cases among those ages 15 to 19 since the pandemic began. 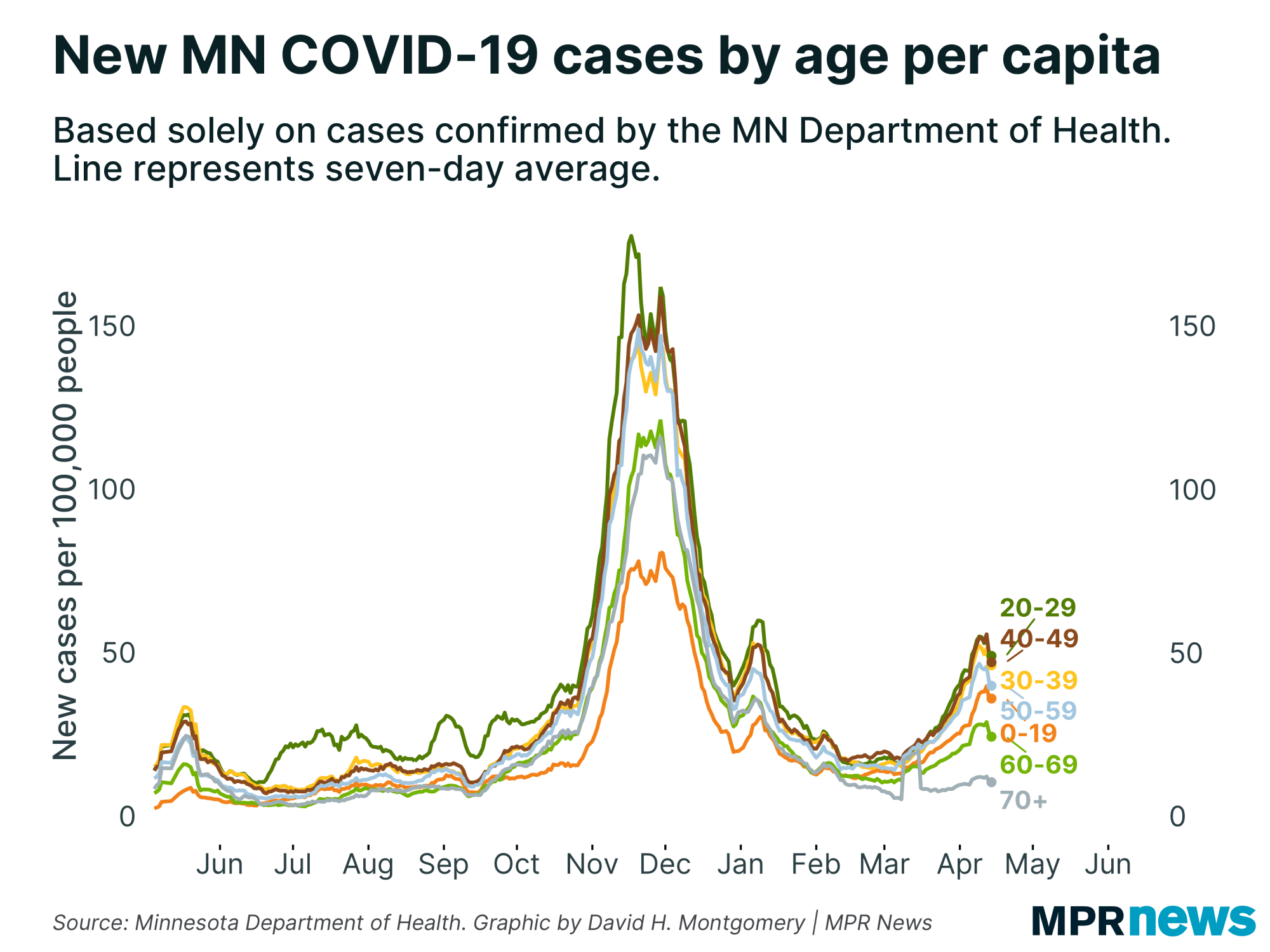 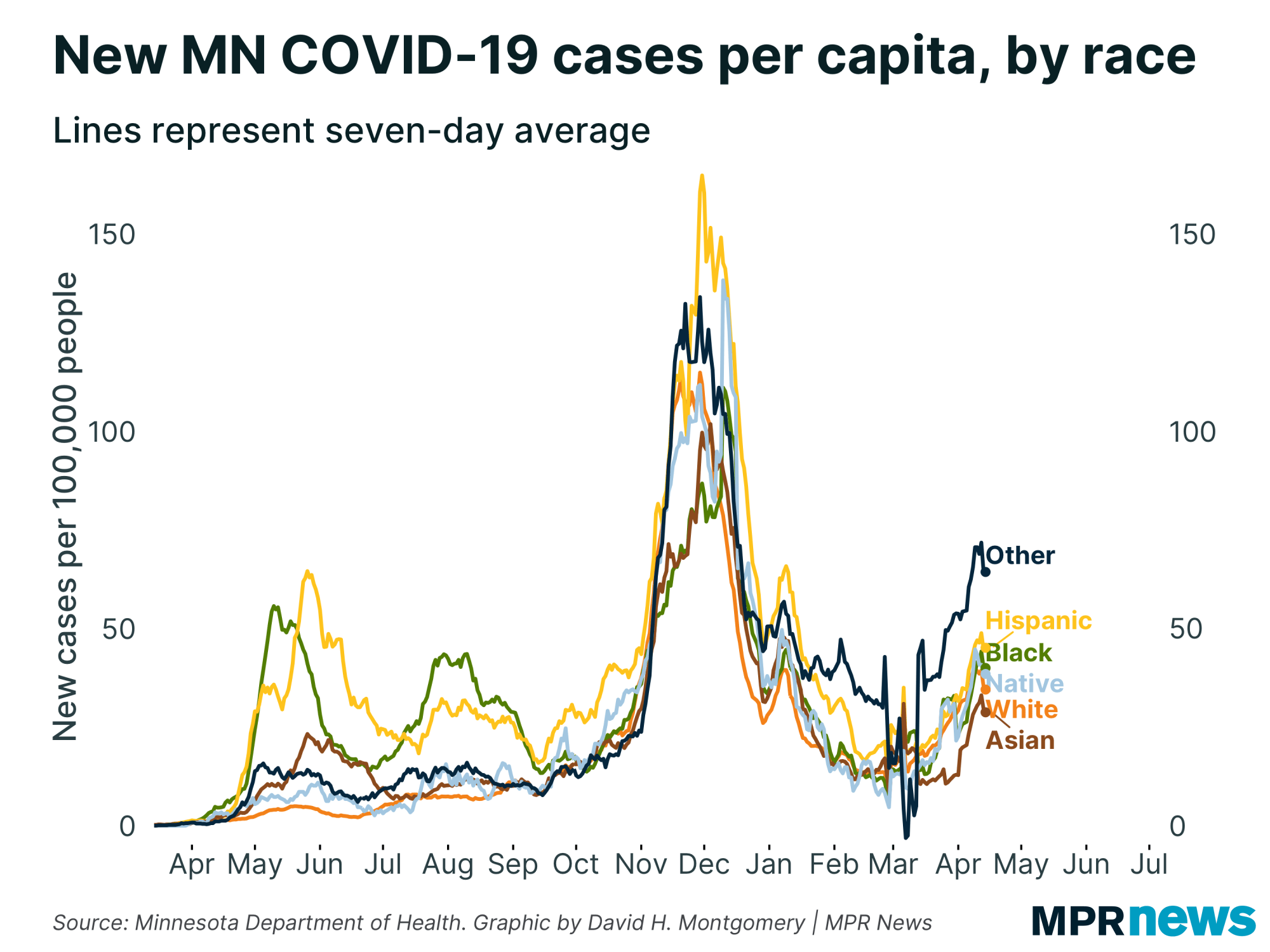 Latest developments from around Minnesota

Mahado Ali, CentraCare's supervisor of cultural competency and health equity, said the news has raised some concern among those who received the vaccine.

"However, we've been very connected to the imams and the community health workers in making sure that the right information is out there for patients and that they're getting all of their questions answered,” Ali said.

CentraCare says it's received no reports of anyone developing symptoms of the rare blood clotting condition that was found in six people who’d received the vaccine, out of nearly 7 million nationwide.

"If you have receive this vaccine and you develop those symptoms, we want you to call the Department of Health," said Tjaden, who said CentraCare continues to believe that COVID-19 vaccines are very safe, and that the pause is likely to be temporary.

The move was ratified Wednesday by a panel of statewide officeholders.

The emergency has been in effect since March 2020. It allows Walz to make decisions outside of normal procedures.

The governor said he’s open to tailoring the executive authority going forward. But he said ending it outright could hamper efforts to quickly distribute vaccines and conduct widescale testing.

He also said some federal money is tied to the emergency declaration.

“The frustration lies between mitigation efforts around the health emergency and our ability to use it,” Walz said. “Because when we start being specific and saying, ‘Would you like us to end the vaccine sites? No, no don’t end the vaccine sites. Would you like us to end supplemental nutrition programs? No, no don’t end supplemental nutrition programs.’ It ends up being, just get rid of the mask mandate.”

Republicans in the Legislature want Walz to relinquish the authority and involve lawmakers in more decisions.

Health Commissioner Jan Malcolm said there are still concerning trends with virus spread — including the state’s test positivity rate, which she said is back above 7 percent.

That rate, she said, is higher than it’s been in recent months and comparable to levels seen last fall.

To read the original posts and see more COVID-19 reporting, follow this link to the MPR News website.  https://www.mprnews.org/story/2021/04/15/latest-on-covid19-in-mn