Latest on COVID-19 in MN: Vaccinations push higher, but so do cases Minnesota officials believe the vaccination effort this spring will ensure that Minnesota doesn’t relive the worst of the pandemic — but that doesn’t mean the next few weeks will be easy. Active cases and hospitalizations continue to push higher.

Adding to the complication: On Tuesday, state officials followed the lead of the federal Food and Drug Administration and Centers for Disease Control and Prevention, which jointly recommended a pause in administering the one-dose Johnson & Johnson vaccine.

“This is being done out of an abundance of caution. This is the way the system is supposed to work. I would anticipate this should be a relatively short pause,” Gov. Tim Walz said Tuesday, adding that 95 percent of the vaccinations in Minnesota have been Pfizer or Moderna supplies and those shipments are continuing unabated.

Severe side effects from the J&J vaccine remain extremely rare, said Malcolm. Anyone experiencing severe headaches, abdominal pain or shortness of breath within three weeks of receiving the J&J shot should contact their health care provider, she said.

Officials say they are not aware of any cases of blood clots occurring among the more than 184,000 state residents who have received the single dose vaccine.

The newest numbers still suggest the state may reach a hopeful milestone — half of adults with at least one vaccine dose — by the end of this week or early next.

About 32.5 percent of Minnesota adults are completely vaccinated; 47.7 percent have received at least one vaccine dose, including about 84 percent of residents age 65 and older, the state Health Department said Tuesday.

But as vaccination numbers rise, COVID-19 case counts are trending higher, too. Two weeks ago, the state was averaging about 1,500 new cases per day. Now, it’s about 2,100.

The number of known, active cases has been trending upward over the past few weeks, with more than 17,000 as of Tuesday’s report — marking more than three weeks with active daily counts above 10,000.

Hospitalizations have climbed significantly in the past weeks to levels not seen since January, and deaths tied to the disease are trending up, too. Health officials say coronavirus variants circulating in Minnesota are driving those increases. 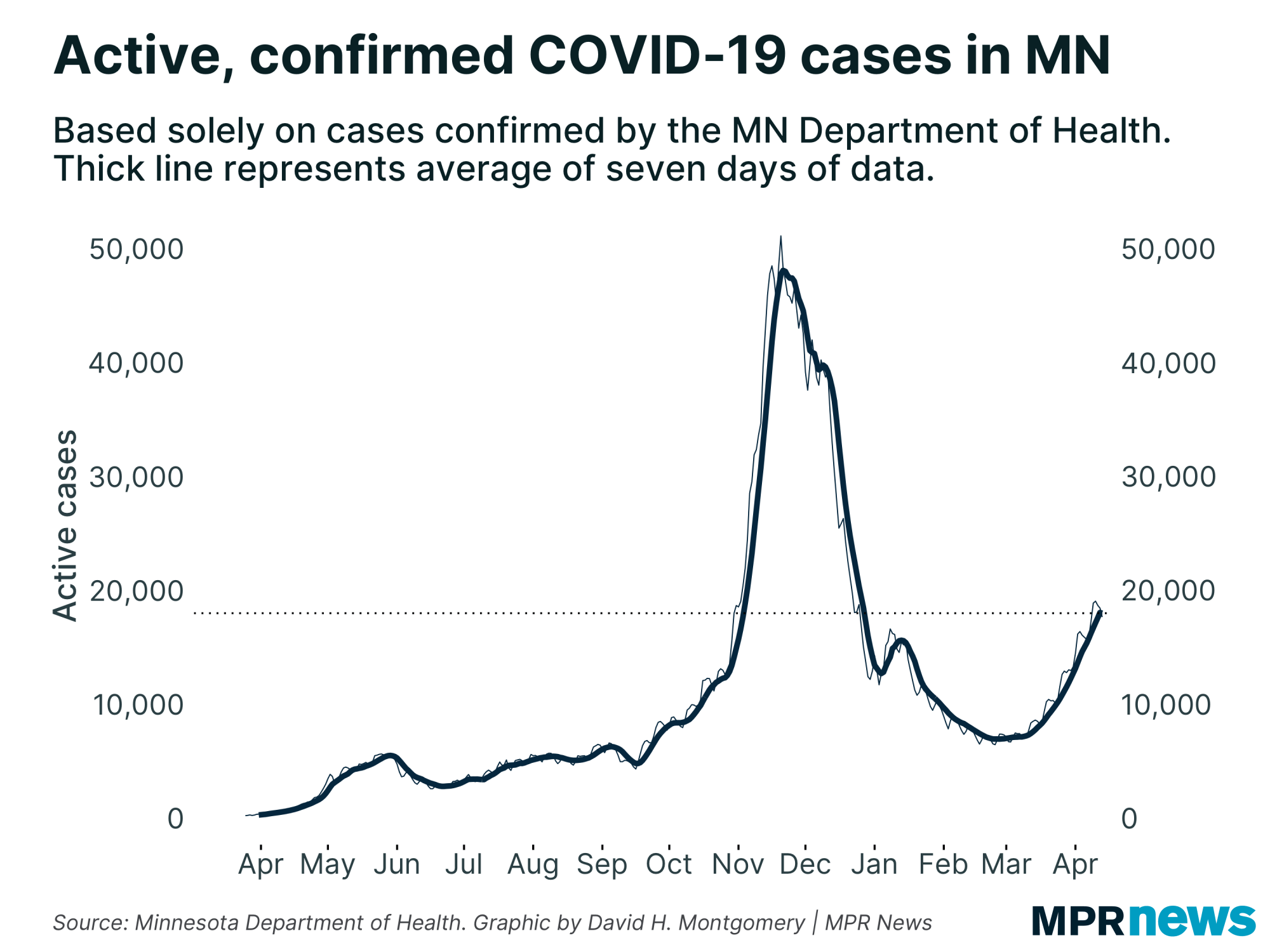 The state on Tuesday reported 676 people in Minnesota hospitals with COVID-19; 159 needed intensive care, hovering near the highest number of ICU patients since early January.

While still low compared to late November and early December, the rising trend is notable given the worries over the rise of the highly contagious U.K. COVID-19 variant, which state health officials suspect is driving the current upswing.

To date, the state has confirmed at least 1,600 cases of the U.K. strain. State epidemiologist Dr. Ruth Lynfield said last week that the variant is linked to five deaths here and likely responsible for the majority of the spread happening now.

Malcolm said recently that while the increase in cases is concerning, the growing number of vaccinated people in Minnesota means the state likely won’t see as steep a surge in cases of the scope seen in November and December.

Three deaths reported on Tuesday raised Minnesota’s overall pandemic death toll to 6,962. Among those who’ve died, about 62 percent had been living in long-term care or assisted living facilities; most had underlying health problems. 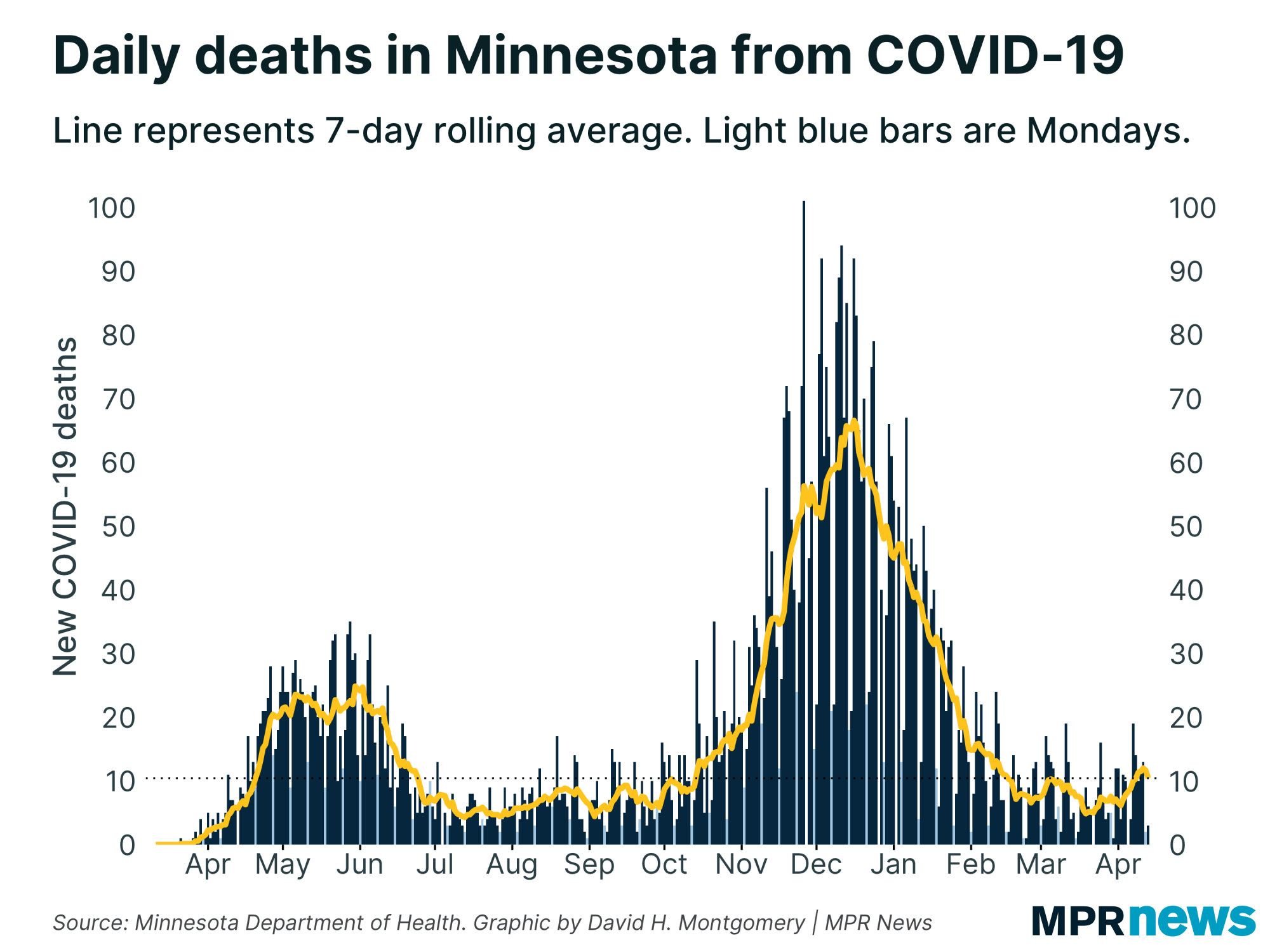 The state has recorded 545,404 total confirmed or probable cases so far in the pandemic, including 1,367 posted Tuesday. About 95 percent of Minnesotans known to be infected with COVID-19 in the pandemic have recovered to the point where they no longer need to be isolated. 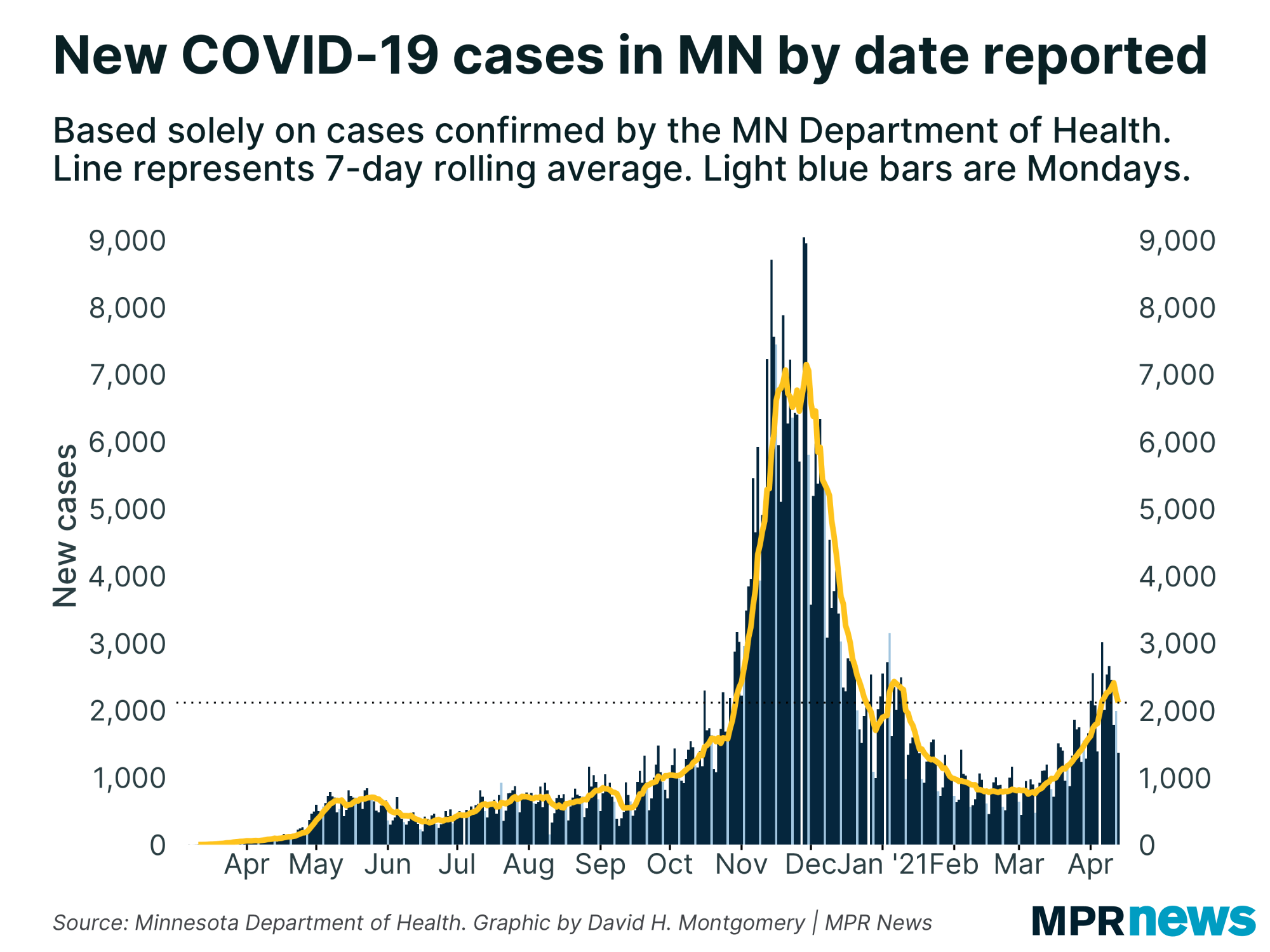 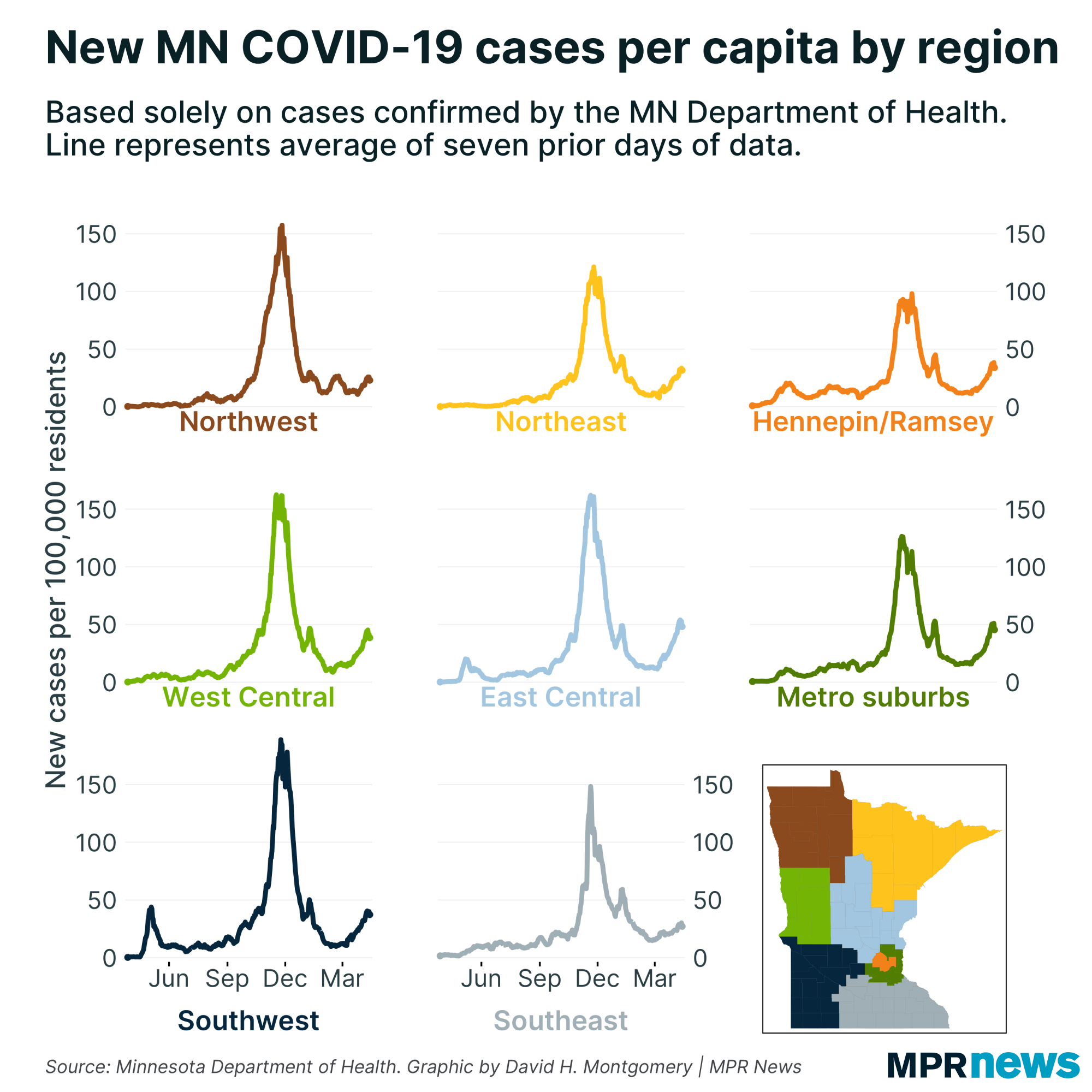 Public health leaders continue to keep watch on clusters popping up over in recent weeks in the southwest Twin Cities metro area as well as Mankato in southern Minnesota, in central Minnesota and around Aurora and Ely in the northeast.

On Monday, the state reported a new outbreak associated with a youth wrestling tournament. The state has linked at least 16 cases to the Northland Youth Wrestling Association State Wrestling Tournament in Sioux Falls, S.D., between March 31 and April 3.

The tournament drew 2,000 wrestlers in addition to spectators and Minnesota health officials say there was lax masking and social distancing at the event.

State officials are asking that any students or families that attended the event be tested immediately, and to avoid all unnecessary travel.

People in their 20s still make up the age bracket with the state’s largest number of confirmed cases — more than 101,000 since the pandemic began, including more than 53,000 among those ages 20 to 24.

The number of high school-age youth confirmed with the disease has also grown, with more than 43,000 total cases among those ages 15 to 19 since the pandemic began.

What you need to know about Minnesota's J&J COVID vaccine pause: Federal authorities are investigating blood clots in six women who got the shot. While the side effects appear to be exceedingly rare, state officials say they are pausing use of the Johnson & Johnson COVID-19 vaccine in an abundance of caution.

COVID vaccine brings hope as Ramadan begins: After a long, challenging year, the availability of a COVID-19 vaccine has brought hope to many in Minnesota and around the globe. Islamic leaders pushed to get the vaccine to as many Muslims as possible before the start of Ramadan, with vaccination clinics planned at mosques in the Twin Cities, Rochester and St. Cloud.

To see the original reports and read more COVID-19 reporting, follow this link to the MPR News website.  https://www.mprnews.org/story/2021/04/14/latest-on-covid19-in-mn