Demonstrators march against racism and police brutality and to defund the Minneapolis Police Department in June 2020 in Minneapolis. Photo: Kerem Yucel | AFP via Getty Images 2020

Democratic lawmakers at the Minnesota Capitol are speaking out on the fatal police shooting of Daunte Wright and the need to make changes in the way police operate. So far, Republicans in the state Senate have refused to consider any new laws on police powers, but on Tuesday, they may have opened the door at least a crack.

“I’m not promising that we’re going to do more reform. I’m promising to listen to see if something is warranted,” Galzeka said, noting that last summer following the killing of George Floyd, the Legislature passed a law that included a ban of chokeholds, a ban on what's called warrior training and a requirement that officers intercede when they see something wrong. 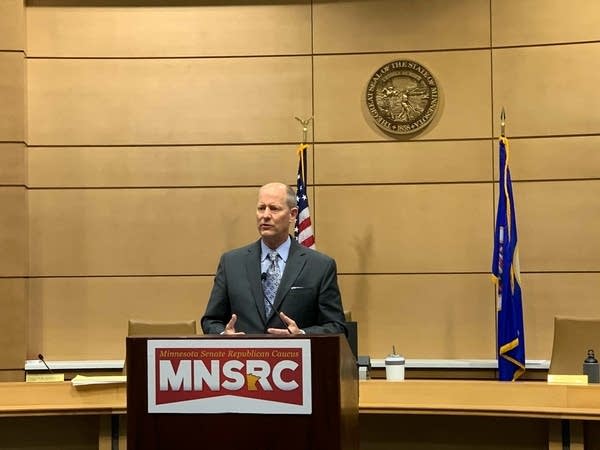 Two Senate committees — transportation and judiciary and public safety — will hold “fact-finding” hearings sometime in the next two weeks, Gazelka said, adding that he wants to hear what people have to say. However, he said he doesn’t want the hearings to get in the way of the constitutional requirement to pass a budget.

“Don’t threaten that we can’t get our budgets done if we don’t get police accountability,” Gazelka said. “We’re going to continue to work on that, as I’ve shown that we did in the past.”

The need to do something was discussed earlier in the day during a phone call Gazelka had with DFL Gov. Tim Walz and DFL House Speaker Melissa Hortman.

Walz said he stressed the need for Senate action during the call, and that he was hopeful after the candid conversation.

House Democrats have been critical of Senate Republicans for not doing enough this session to address police accountability concerns, and some made comments this week about delaying action on the budget until the Senate moves.

One of those lawmakers, Rep. Cedrick Frazier, DFL-New Hope, welcomed the news of senate hearings, which he learned about during a news conference to criticize Senate leaders for inaction.

“We are tired, very tired, very tired of losing black lives,” Frazier said. “It’s been a traumatic experience for our communities. We’re continuing to grieve together. We’re still dealing with the trauma of reliving George Floyd’s killing, and so I hope they take all these things into consideration and take us seriously and pass legislation that truly shows that black lives matter.”

Frazier, who is vice chair of the House public safety committee, and other DFL lawmakers say they want additional legislation aimed at weeding out potential problem police officers.

And they want changes in the criteria police use to make traffic stops.

“Given the events of the last couple of days, I think that absolutely should be one of the top things that we are considering as the omnibus bills move forward and as we confer in conference committees,” Becker-Finn said.

To hear an audio version of this report and read related articles, follow this link to the MPR News website.  https://www.mprnews.org/story/2021/04/13/senate-gop-promises-talk-but-not-necessarily-action-on-poli...