Nurse Sam Kissi, left, draws a dose of COVID-19 vaccine into a syringe before administering it to Zarea Fonge at a vaccine clinic put on by Black Nurses Rock and Ramsey County at Shiloh Missionary Baptist Church in St. Paul on March 28.  Photo: Evan Frost | MPR News file

Minnesota officials have repeatedly described the state’s current COVID-19 situation as a kind of competition to inoculate as many Minnesotans as possible before the disease variants get a stronger foothold in the state.

Those COVID-19 strains are causing problems now, but reinforcements are arriving.

Active cases are trending now at levels not seen since late December. Hospitalizations and intensive needs are climbing. But the vaccination effort continues apace. Minnesota appears to be on track to have 50 percent of adults vaccinated within two weeks.

Wednesday’s Health Department data showed more than 1.2 million Minnesotans fully inoculated while nearly 1.9 million have received at least one dose, including about 83 percent of residents age 65 and older. The agency reported about 49,000 more vaccinations. 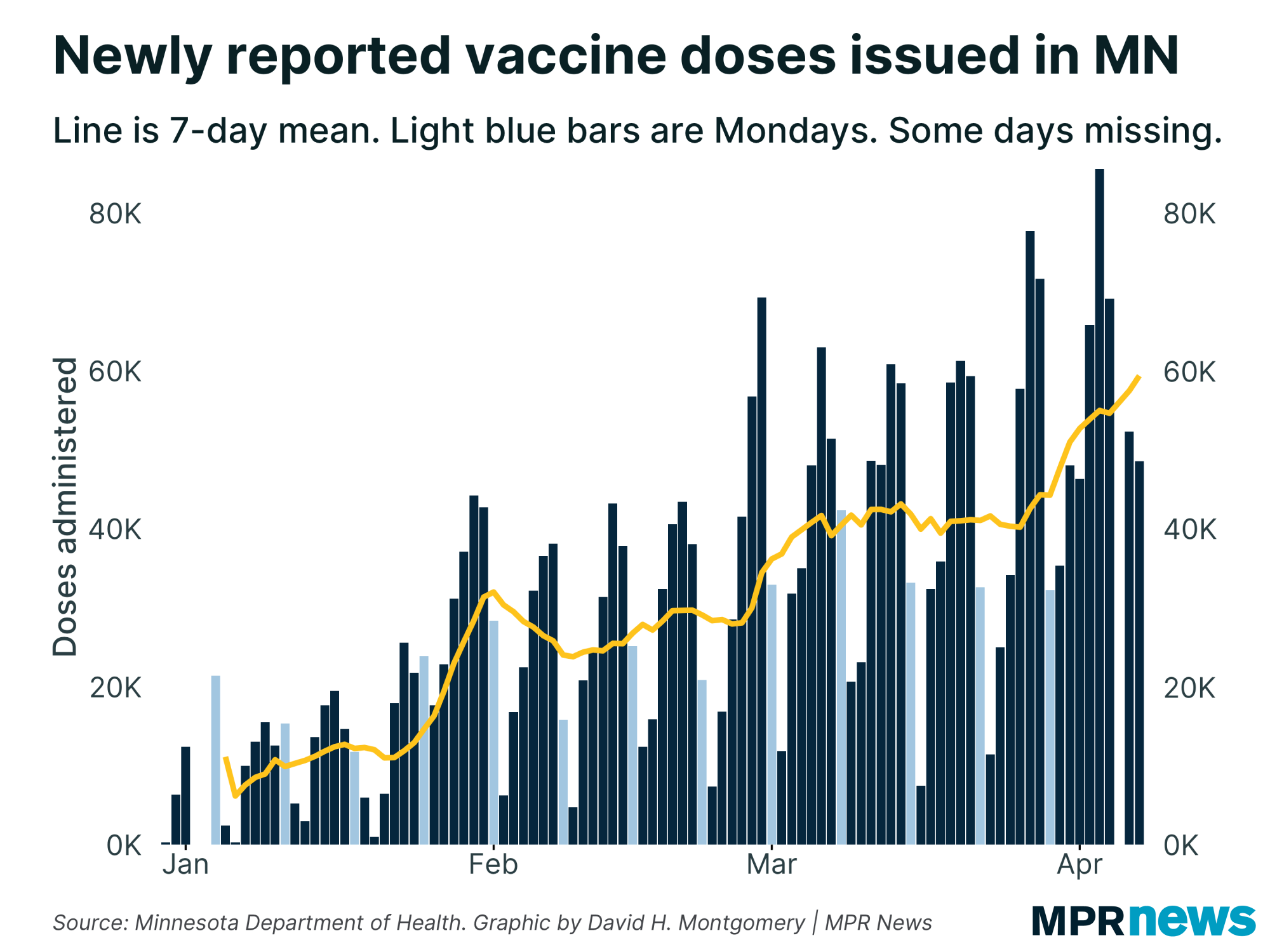 Thanks to vaccinations, Minnesota likely won’t see as severe a spike in cases this spring as it saw in November and December, but the pandemic isn’t over, Minnesota Health Commissioner Jan Malcolm told reporters Tuesday. 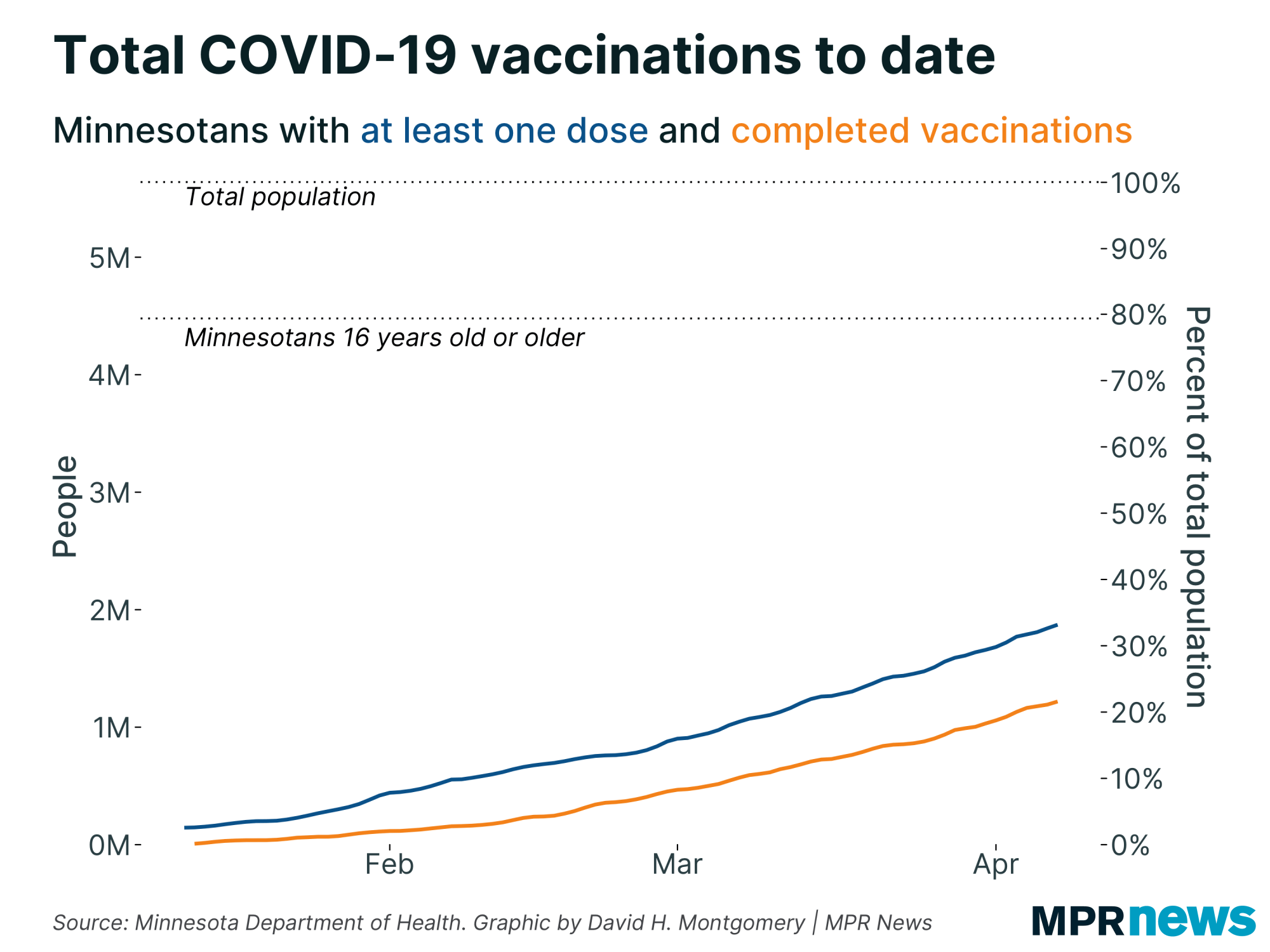 “We’re definitely not out of the woods yet,” Malcolm added, noting that the seven-day positive test rate for the disease is back up at 6 percent. A 5 percent rate is a warning sign of growing spread. 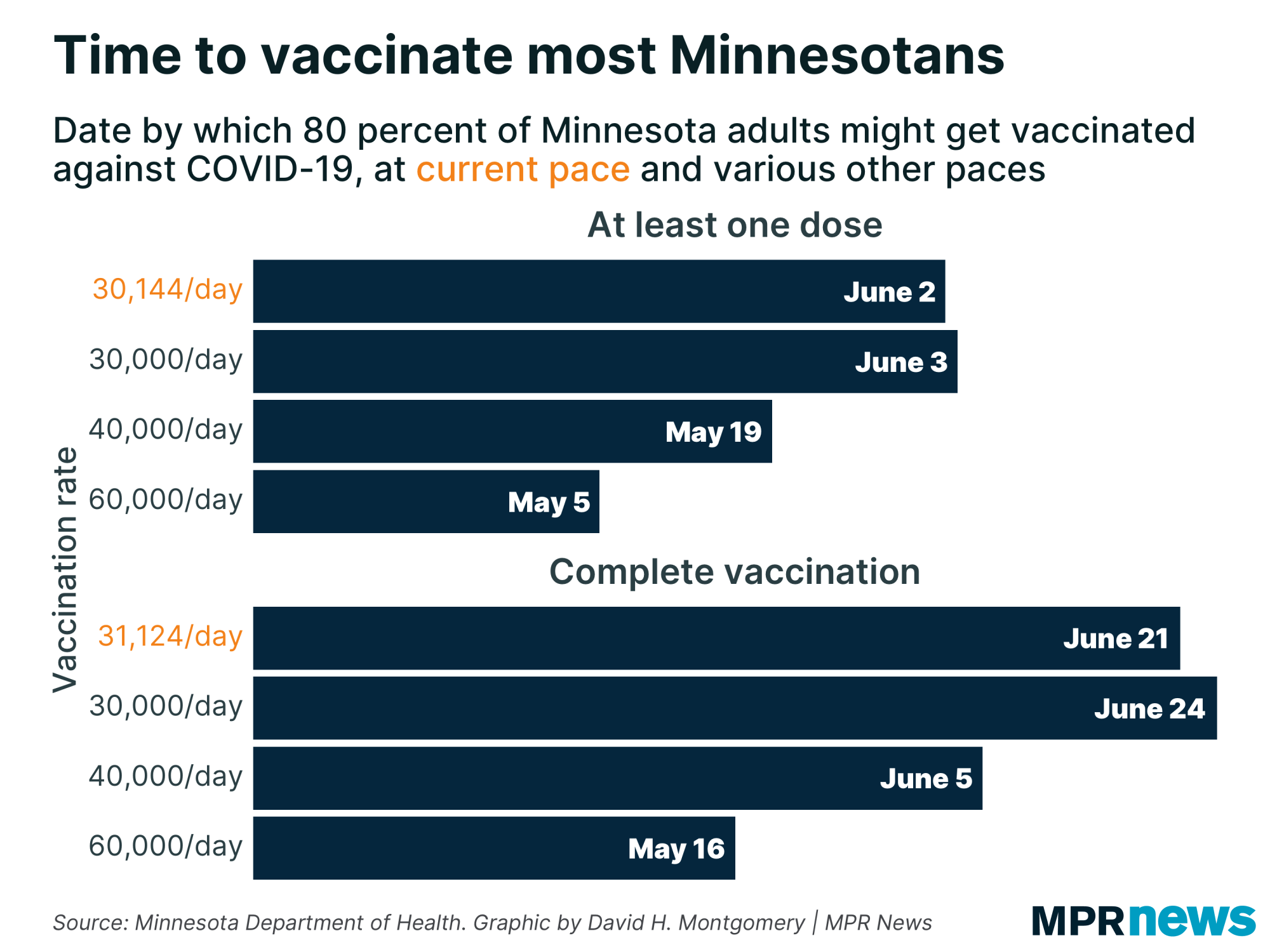 Hospitalizations, for instance, have climbed significantly in the past few weeks. The most recent agency data show 538 people with COVID-19 in Minnesota hospitals; 138 needed intensive care. These are levels not seen since January. 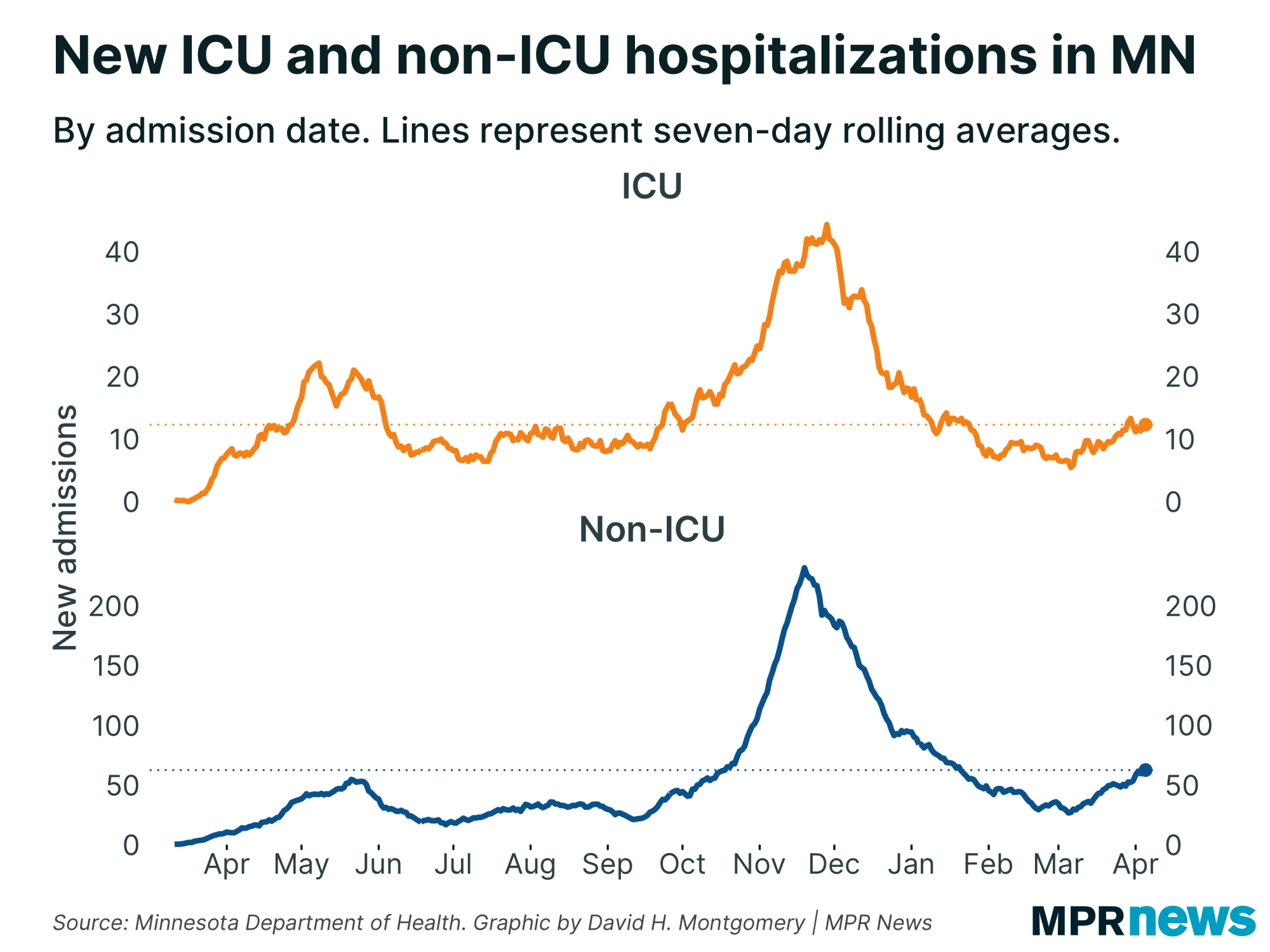 COVID-19 hospital bed use is up by 40 percent since late March, and the percentage of new cases requiring a hospital stay is growing, Malcolm noted.

The age of those needing hospitalization has been skewing younger.

The average age of people hospitalized during the pandemic is 65, but it was 57 years old from March 23 to 29, Dr. Ruth Lynfield, the state’s epidemiologist, said Tuesday.

The median age for deaths is 83 years old through the pandemic, but in March it was 78, she noted.

The number of known, active cases has been trending upward over the past few weeks, with about 16,000 active cases as of Wednesday’s report — marking nearly three weeks with active counts above 10,000. 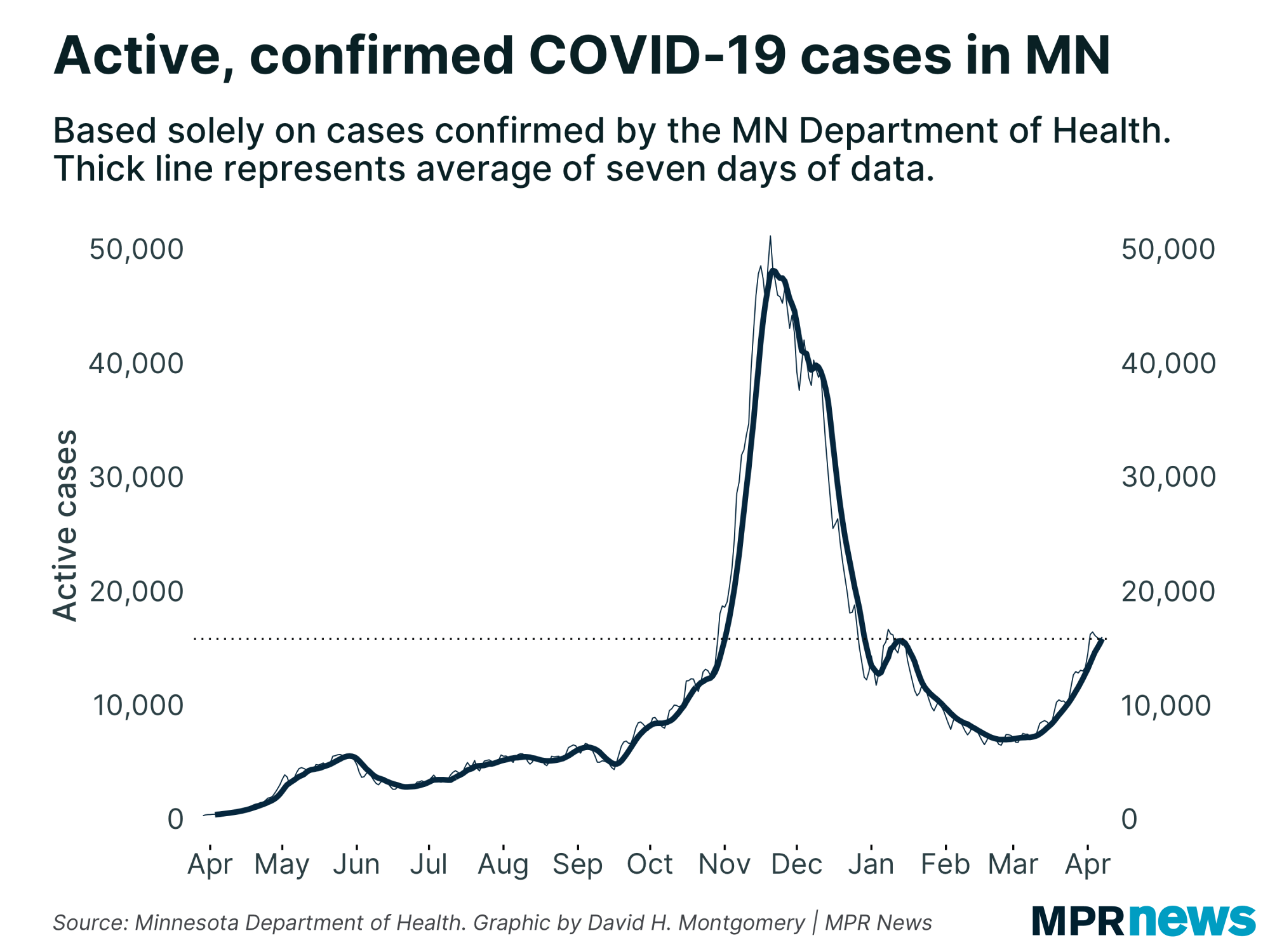 While still low compared to late November and early December, the rising trend is notable given the worries over the rise of the highly contagious U.K. COVID-19 variant, B.1.1.7, which state health officials suspect is driving the current upswing.

They’d confirmed about 1,000 cases in the state of the U.K. strain as of last week and believe it’s responsible for the majority of the spread that is happening now.

Nineteen deaths reported on Wednesday raised Minnesota’s overall pandemic death toll to 6,908. Among those who’ve died, about 62 percent had been living in long-term care or assisted living facilities; most had underlying health problems.

The state has recorded 532,658 total confirmed or probable cases so far in the pandemic, including 2,004 posted Wednesday. About 96 percent of Minnesotans known to be infected with COVID-19 in the pandemic have recovered to the point where they no longer need to be isolated. 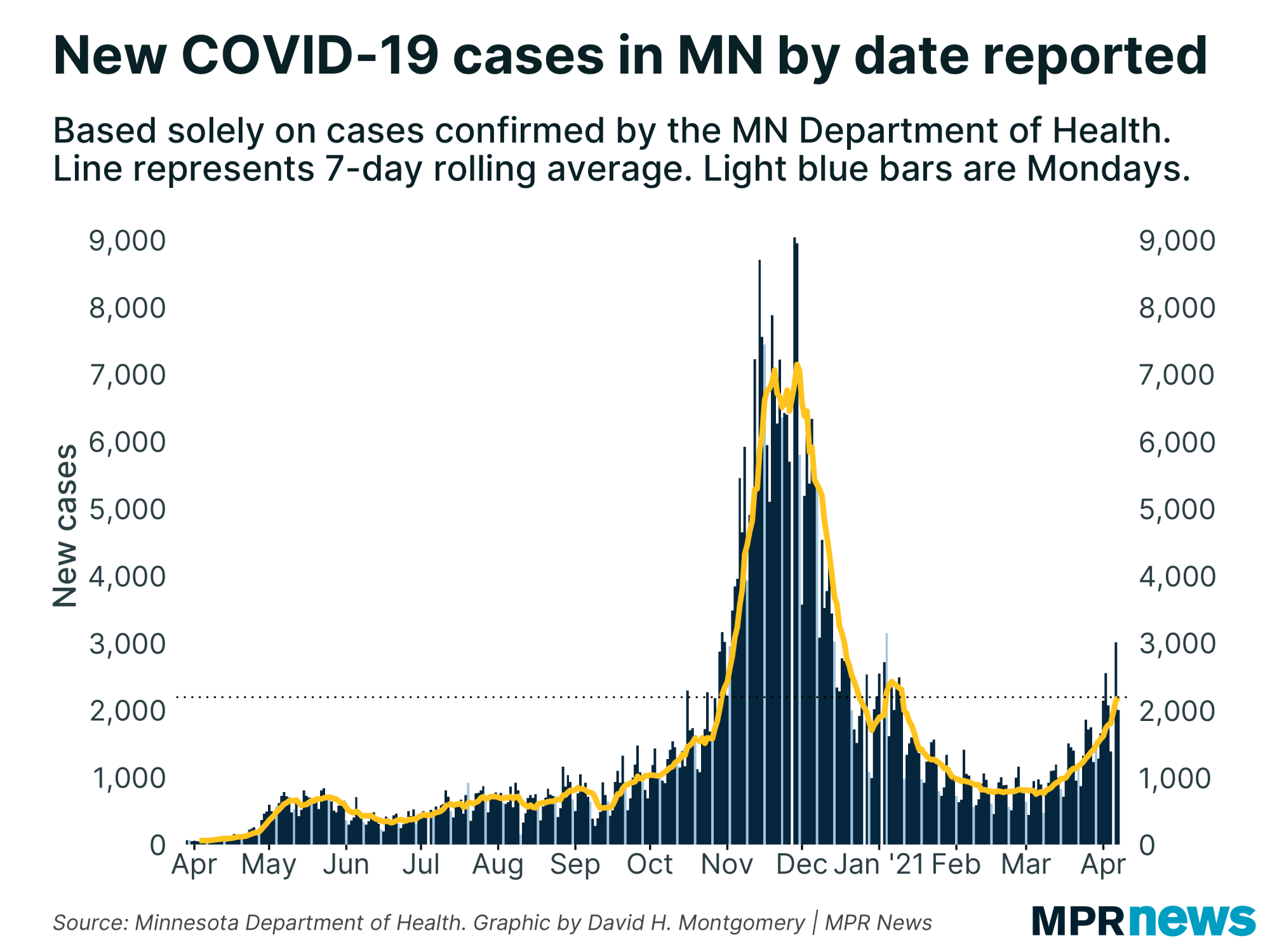 Regionally, all parts of Minnesota are in better shape than they were in late November and early December. The latest numbers, however, show cases creeping up in almost every region of the state. 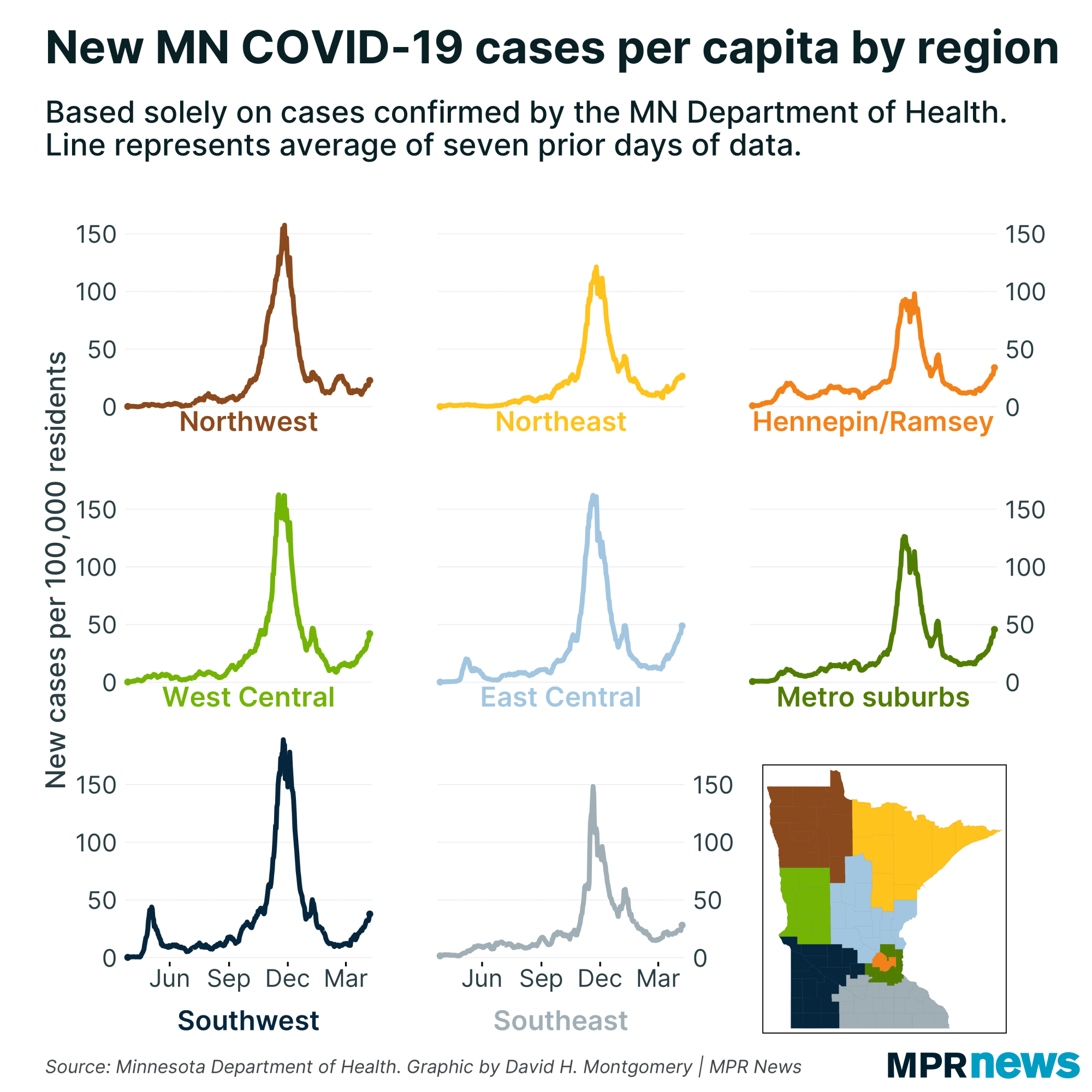 Public health leaders continue to keep watch on clusters in the southwest Twin Cities metro area as well as Mankato in southern Minnesota and around Aurora and Ely in the northeast. Central Minnesota is also seeing a rise in positive COVID-19 cases.
Cases spread across age groups

People in their 20s still make up the age bracket with the state’s largest number of confirmed cases — more than 99,000 since the pandemic began, including more than 52,000 among those ages 20 to 24. 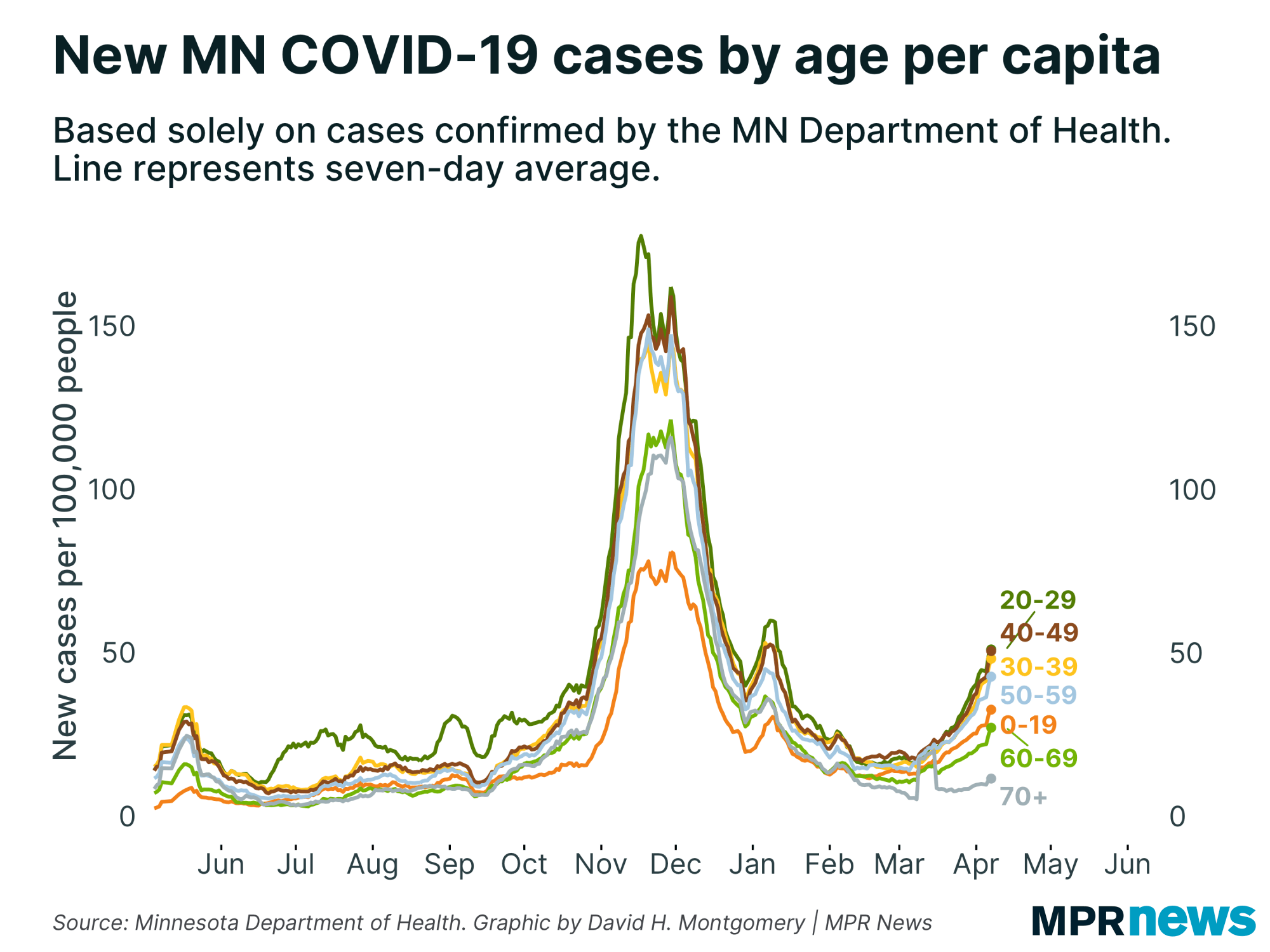 The number of high school-age youth confirmed with the disease has also grown, with more than 42,000 total cases among those ages 15 to 19 since the pandemic began. 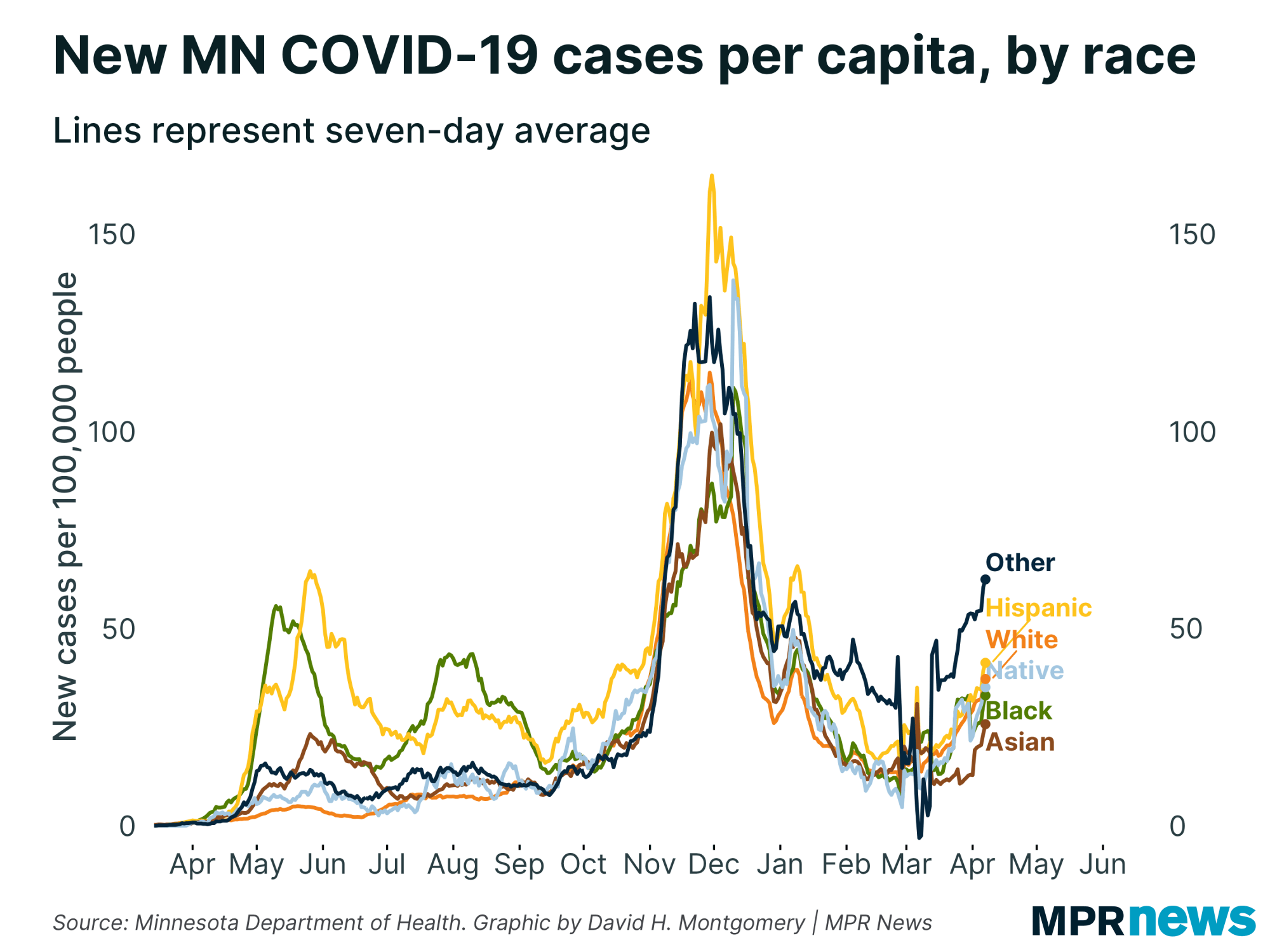 Feeling guilty, anxious about your COVID-19 vaccine search? You're not alone: Every day, thousands more Minnesotans are receiving a COVID-19 vaccine. The legions of vaccine selfies make it clear that getting the shot is a huge relief for many. But some are experiencing other emotions — anxiety, if they haven't gotten vaccinated yet, and sometimes guilt, if they were able to secure an appointment.

Play ball! Largest state gathering in a year set for Target Field: The Minnesota Twins will welcome thousands of fans back to Target Field on Thursday for their home opener. Some experts say with cases up significantly in Minnesota and the B.1.1.7 variant rapidly spreading now is not the time to gather in large groups.

CDC says more virulent British strain of coronavirus now dominant in U.S.: The variant known as B.1.1.7, which is more easily spread, was first identified in England last fall. Since then, it has spread quickly in the U.S.

Black nurse volunteers give COVID shots to Minnesota's most vulnerable: Inequities persist between how easily and quickly Minnesotans of color are getting vaccinated for COVID-19, as compared to their white neighbors. Helping to bridge that gap is a volunteer network of Black nurses, who say giving shots in familiar locations is key to getting more people of color vaccinated more quickly.

Ridership plunges on Northstar line amid pandemic, sparking debate over its future: Metro Transit says ridership has plummeted 96 percent since before the pandemic. That's led one state lawmaker to call for the commuter rail line to be shut down.

To see the original posts and read more COVID-19  reporting, follow this link to the MPR News website.  https://www.mprnews.org/story/2021/04/08/latest-on-covid19-in-mn