A month ago, Minnesota was in the grip of a bitter cold snap with temperatures in the 30s, 40s — even 50 below zero in northern parts of the state.

Too cold for many people — and for invasive emerald ash borers.

As we head into spring, a silver lining of that February cold snap may be that it caused a big setback for the ash borer's spread across Minnesota.

Mark Abrahamson, plant protection director at the Minnesota Department of Agriculture, said research has shown that at temperatures of 20 below zero, about half of ash borers may die. At 30 below, that can be up to 90 percent.

"The bottom line is — it's not a cure. And it doesn't alleviate the need for management action. ... But it is a big assist in terms of slowing down the growth of populations," he said of the cold snap’s effect on the insects.

With emerald ash borer, Abrahamson said, "the tree mortality is directly related to how many beetles there are; it's the numbers of beetles that are overwhelming the trees and killing them. So anything that contributes to fewer beetles, is going to slow down the rate of tree mortality." 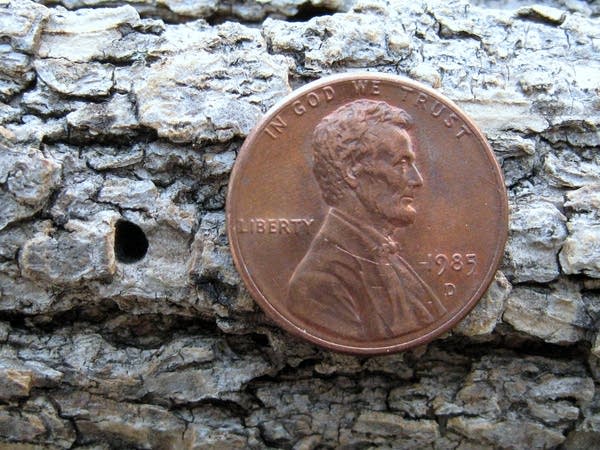 The tiny, D-shaped hole is a sign of an emerald ash borer infestation. After hatching from eggs and living under the bark of ash trees as larva, the adult beetle bores its way out of the tree, leaving behind a tell-tale hole.  Photo: Tim Nelson | MPR News 2009

But some of the beetles have tolerance to the cold, or are able to stay protected enough to survive the subzero temperatures — so Abrahamson said it's still important to work to contain the insects through restrictions on the movement of firewood and other means.

He said Minnesota will continue its ash borer fight even as the federal government has all but given up on efforts to control the pest on a nationwide scale. Minnesota will take over some work previously done at the federal level, such as controlling interstate movement of wood into the state.

"From a federal perspective, it's kind of a lost cause," Abrahamson said. "But when you dial the scale down a little bit, and you look just at Minnesota — a lot of the native range of ash that's unaffected is here in Minnesota, and we have a ton of ash trees. So for us, it continues to be a real significant issue at the state level."

Emerald ash borer larvae tunnel under the bark of ash trees and kill them. Minnesota has an estimated 1 billion ash trees — the most of any state.

The ash borer has been confirmed in more than two dozen Minnesota counties.

Abrahamson said it's important for people to report potential new emerald ash borer infestations in Minnesota. One thing to look for is woodpecker damage on ash trees; it’s not a guarantee that ash borers are in the tree, but it’s at least a sign that some kind of insects are under the bark.

And he said Minnesotans traveling on camping trips this spring and summer should look for state-certified firewood that's safe to transport around the state without a risk of spreading the ash borer — or purchase firewood at their destination.

To see the original story and read related reporting, follow this link to the MPR News website. https://www.mprnews.org/story/2021/03/14/february-cold-snap-likely-helped-minnesotas-fight-against-e...