Work will continue this year on a project to build a new campground and mountain bike trail access at Split Rock Lighthouse State Park on Minnesota's North Shore.

While the popular park near Beaver Bay currently has walk-in campsites, the new campground will offer Split Rock's first drive-in camping option. Called the Shipwreck Creek campground, it's been in long-range plans for the park for decades and is tentatively slated to open in fall.

"We don't have any drive-in sites at the moment. And there's a lot of people that are looking for that. So it'll bring about a lot more camping opportunities, show some people some different aspects of the park that they didn't know existed," park manager Katie Foshay said.

The new campground — its name is a nod to the many shipwrecks along that stretch of the Lake Superior shore — will have 46 sites with electric service, and a modern shower and bathroom facility. 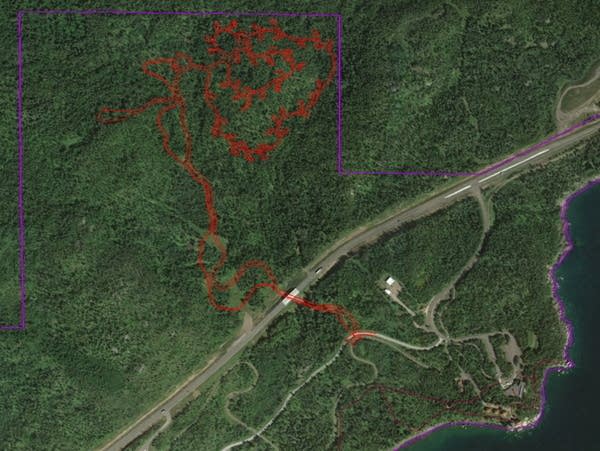 This aerial view of Split Rock Lighthouse State Park on Minnesota's North Shore shows the design of the new Shipwreck Creek campground, in red. The access road passes under state Highway 61; the lighthouse complex is at lower right. The campground is slated to open in fall 2021.  Photo: Minnesota Department of Natural Resources

It's on the inland side of Minnesota Highway 61. Access will be via Split Rock's existing main entrance; a new park road will cross under Highway 61 and up to the new campground — similar to the setup at Tettegouche State Park. When Highway 61 was under construction several years ago, a bridge was designed to accommodate the campground access road.

Work on the campground started in 2019. As the site has been developed, Foshay said, "they left a lot of the ledge rock that's already up there and incorporated that into all of the campsites. So each campsite is very unique. ... You get a little bit more of a buffer between each site, but then there's a lot of really interesting rock features that come out in the different campsites."

The project also includes a parking lot for hikers and mountain bikers, to access both the Gitchi-Gami State Trail and a network of new mountain bike trails being constructed by Lake County adjacent to the park. Twelve miles are already built, with another 10 miles planned for this summer. An access trail will link the parking area to the county trails, but it won't open until the campground does.

The $7.5 million cost for the design, permitting and construction of the campground project is from the Parks & Trails Legacy Fund. Lake County received a $1.6 million grant from the state that went toward the access road.

As part of an effort to offset the energy consumption of the new campground, the DNR plans to install solar panels at another park more suited to solar energy, Foshay said.

To see the original report and read related stories, follow this link to the MPR news website.  https://www.mprnews.org/story/2021/03/08/new-campground-under-construction-at-split-rock-lighthouse-...