Kiyis live in the depths of Lake Superior. By studying the kiyi’s genetics, scientists may be able to help restore them in the other Great Lakes. Image: Retrieved from the U.S. Geological Survey

A new understanding of how genes affect which fish can see deep in Lake Superior could help scientists understand how to preserve them.

One species of Lake Superior fish may have regained an ancestral adaptation that enables better vision in deep water, according to a recent study.

This information could help create restoration plans for the kiyis, a fish that lives deep in Lake Superior. To adapt to the dim light underwater, kiyis recovered genes from their ocean-dwelling predecessors.

When fish migrated from the ocean into the Great Lakes, their vision evolved to see better in shallow river water. Because kiyis live in deeper waters than related species, they regained genes specialized for deep water vision, reports the study published late November in Genome Biology and Evolution. It is unknown if this is due to re-evolution of an identical trait, or re-emergence of an uncommon trait.

Because conditions differ greatly in the dark depths where kiyis live, vision is especially important for hunting and mating, said Katherine Eaton, a doctoral student in the department of biological sciences at Auburn University. Eaton was the lead author of the study while she was an undergraduate at the University at Buffalo.

When light hits the water, it filters out different colors of light from the visible spectrum, Eaton said. Red light is the first color to be filtered out. As you go deeper you end up with a reduced spectrum of light available.

At the surface of the lake fish can see in red-shifted waters, Eaton said. Because kiyis live in deeper waters they have recovered the ability to see in darker, blue-shifted waters. This trait was likely harbored by the kiyi’s ocean dwelling ancestors.

“I think the biggest thing is trying to understand how these genetic changes relate to the habitats that these fish prefer,” said Trevor Krabbenhoft, a principal investigator on the study.

“That gives us some ideas, some predictions about how they might respond to environmental changes in the future,” he said.

“By studying these genetic changes, we can provide information to decision makers trying to restore these populations,” said Krabbenhoft, who is an assistant professor in the department of biological sciences at the University at Buffalo. 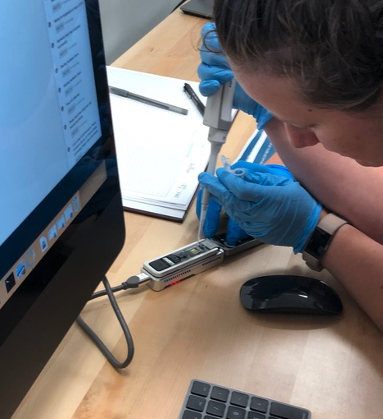 Katherine Eaton is the lead author of a recent study on kiyis in Lake Superior. Eaton developed a new way to identify the specific vision gene carried by the fish. Image: Katherine Eaton

Kiyis belong to a group of fish called ciscoes which play a key role in Great Lakes food webs. They serve as a main food source for siscowet lake trout.

There were once eight kinds of ciscoes in the Great Lakes, according to the Great Lakes Fishery Commission. Many of those species are completely or locally extinct in different parts of the Great Lakes system, said Andrew Muir, the commission’s science director. This is due to commercial fishing, habitat change and invasive species.

“Lake Superior is the only lake to contain many of the remnant populations and species that historically existed. So it’s kind of a model to understand what the other lakes could have looked like,” Muir said.

Scientists are looking to learn more about the different types of ciscoes to preserve and restore extinct populations. If we understand more about the habitats these fish prefer, we can provide better advice to parties interested in restoration, Muir said.

Because kiyis live in deeper waters than similar species, we know less about them, he said.

“We don’t even know for sure when [kiyis spawn], where they can be collected when they’re spawning or anything like that,” said Matt Herbert, a senior conservation scientist at the Nature Conservancy, a global conservation organization with preserves throughout the Great Lakes region.

Kiyis are native to all Great Lakes except Lake Erie, Herbert said.

Because kiyis are plentiful in Lake Superior, they are deemed more feasible for restoration than other species, Herbert said. Although there is interest in restoring kiyis in the lower lakes, it’s not possible with the current knowledge, he said.

While scientists are researching kiyi spawning habits, Krabbenhoft says the genetic information gained from the study will help to identify future samples and determine where the fish spawn.

To see the original article and related environmental reporting, follow this link to the Great Lakes Echo website.  http://greatlakesecho.org/2021/03/05/fish-vision-genes-could-inform-great-lakes-restoration/