An empty vial of the Moderna COVID-19 vaccine sits among syringes ready to be injected into the arms of eligible residents late last month at the Cook County Community Center in Grand Marais, Minn.    Photo:  Derek Montgomery for MPR News file

Minnesota’s vaccination pace is finally accelerating. The state could hit its goal for 65 and older by mid-March.

If there’s a concern right now, it’s that death counts have inched up over the past week. Overall, though, the state’s still seeing positive signs that the pandemic is ebbing.

One bright milestone was passed on Thursday: when the count of Minnesotans now completely vaccinated eclipsed the total count of known COVID-19 cases in the pandemic.

The Health Department reported 500,188 — about 9 percent of Minnesotans 16 and older — are completely vaccinated now. About 17 percent — more than 948,000 people — had received at least one dose.

After a wobbly start, vaccinations are running firmly in the right direction.

Officials reported some 35,000 new vaccinations in Minnesota, significantly higher than the prior Thursday. The seven-day trend is running at nearly 40,000 shots daily now, the highest since vaccinations began in late December. 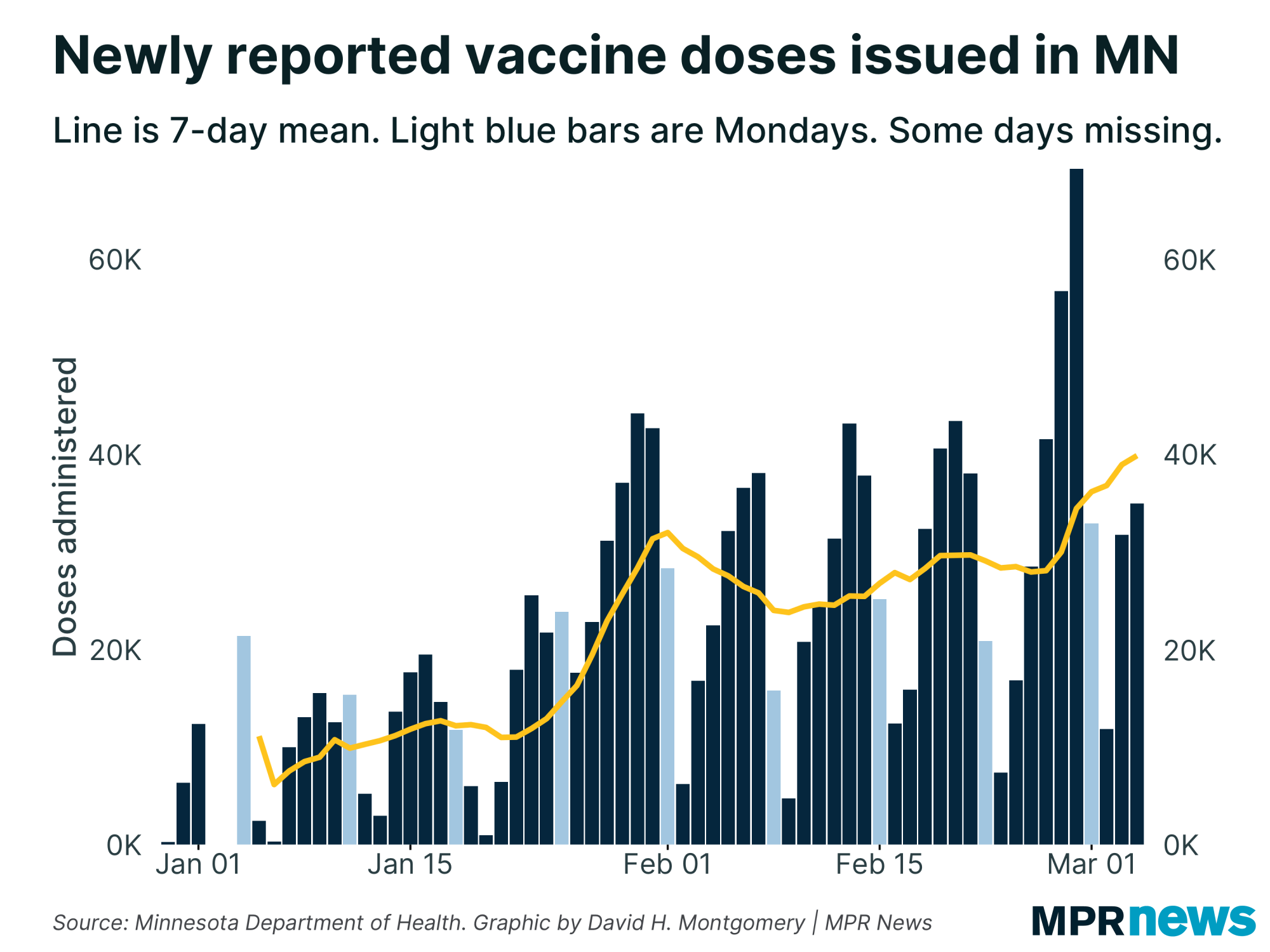 State public health leaders have said for weeks that they’d be ready to ramp up when they got more supply. With the federal government now promising enough vaccine to inoculate every adult American by the end of May — two months earlier than expected — the table seems set.

Conditions are improving quickly enough that June weddings and a Minnesota State Fair this year were within reach, a buoyant Gov. Tim Walz said Wednesday.

“The brass ring is pretty grabable with the State Fair” this year, he said as after highlighting the arrival of the Johnson & Johnson vaccine at a Minneapolis hospital. Activities for “June and beyond, those look pretty promising.” 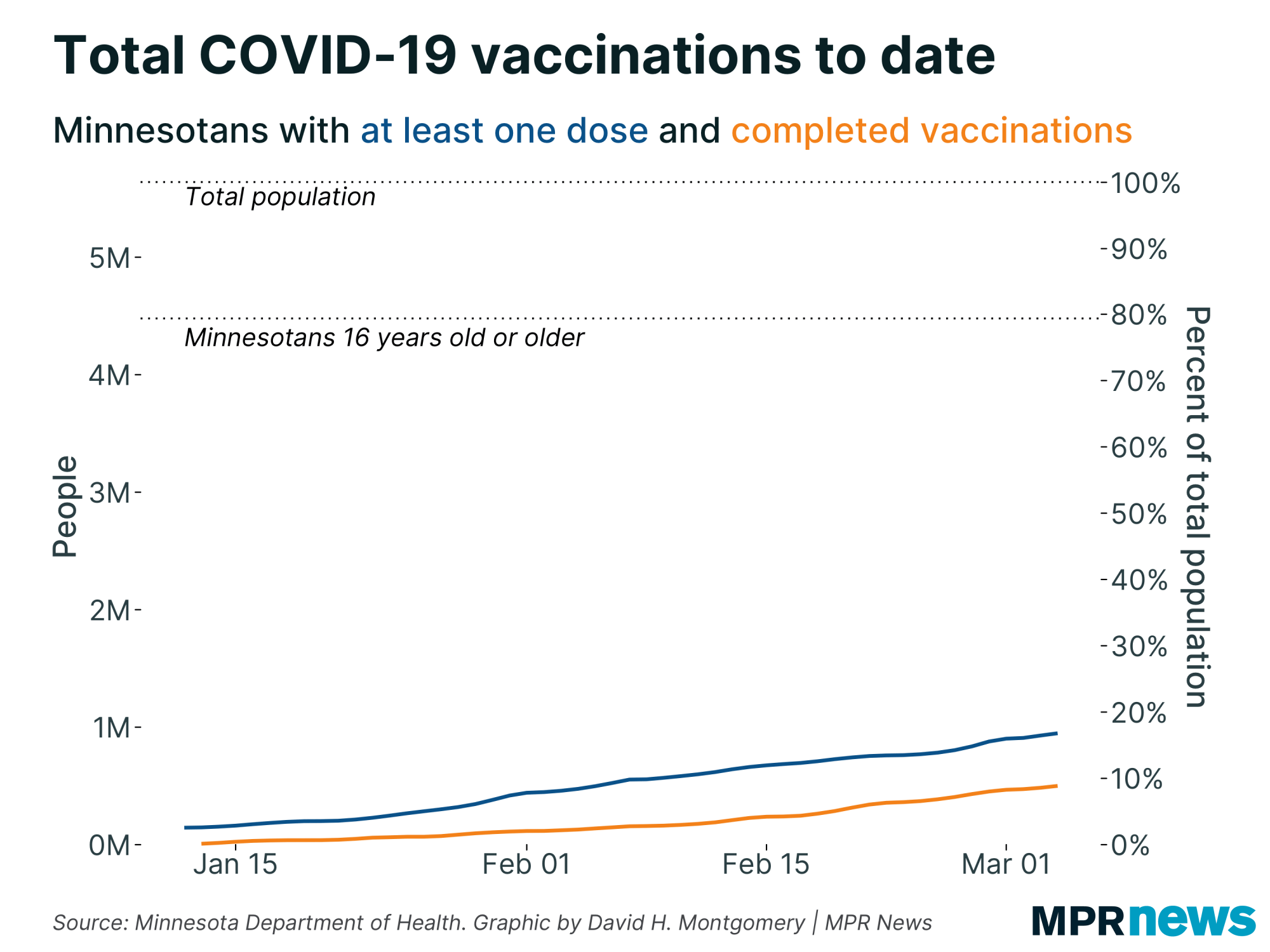 Fifty-six percent of Minnesotans 65 and older have received at least one shot currently, according to Health Department calculations. That’s important since officials have said the state will expand vaccination eligibility when 70 percent of that population gets a first dose.

Officials were expected to meet that goal by the end of March, but Walz on Wednesday said it will come faster than that. On the current trajectory, it could happen March 15. 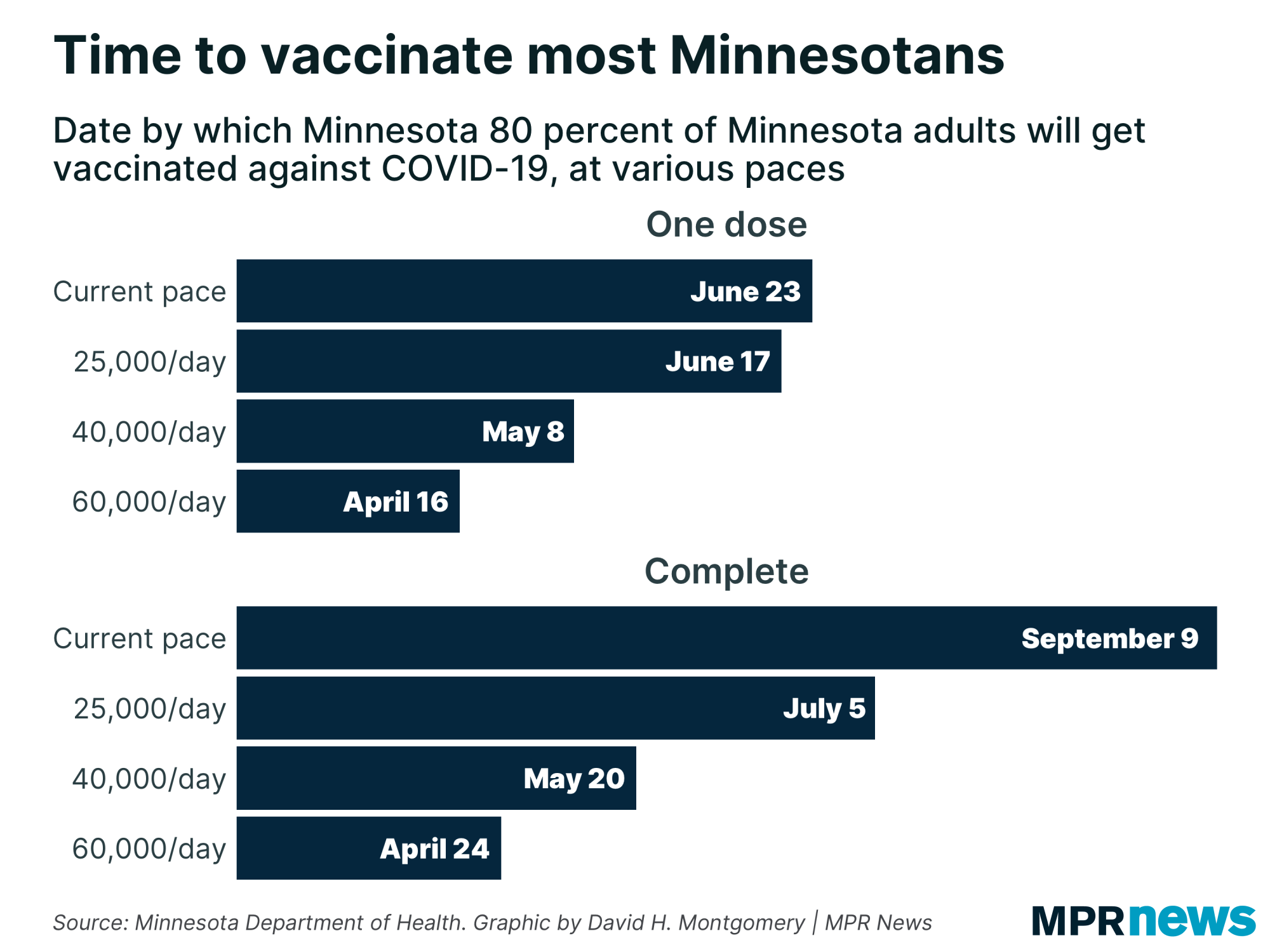 Officials say the arrival of Johnson & Johnson doses, which require only one shot, are a game changer. More than 45,000 doses of the newly approved vaccine should be distributed in Minnesota this week.

Minnesota currently ranks 16th among states in doses administered per 100,000 people, according to data collected by the federal Centers for Disease Control and Prevention.

As the pace of vaccinations gains speed, Minnesota’s COVID-19 numbers show the state stable. Hospitalization rates remain at levels last seen before the late-fall surge in cases. There were 229 people hospitalized with COVID-19 in Minnesota as of Thursday; 59 needed intensive care. 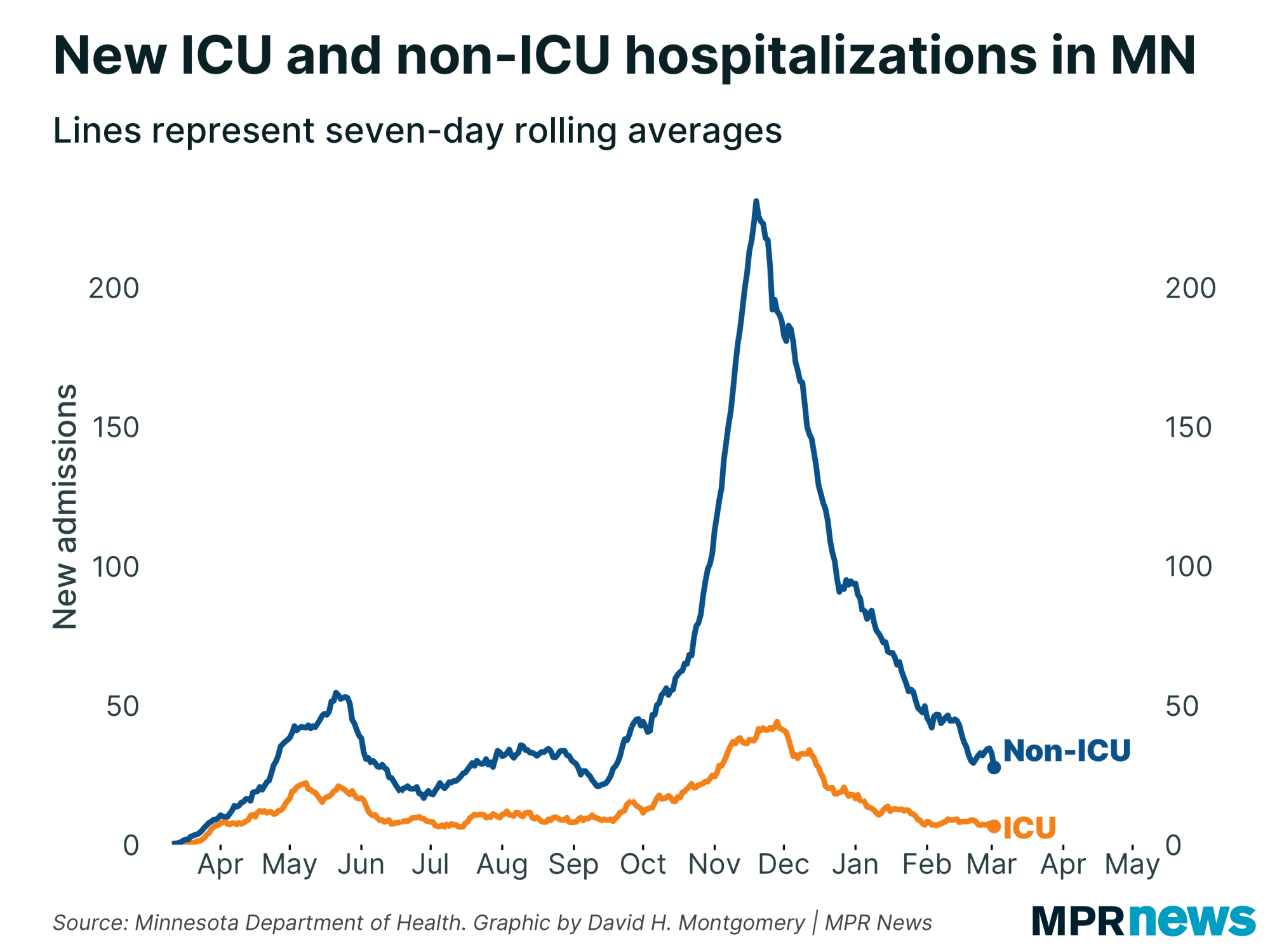 Known, active cases came in at 7,125, continuing a trend that stayed fairly stable through February and remains down dramatically from late November and early December, when active cases hovered around 50,000. 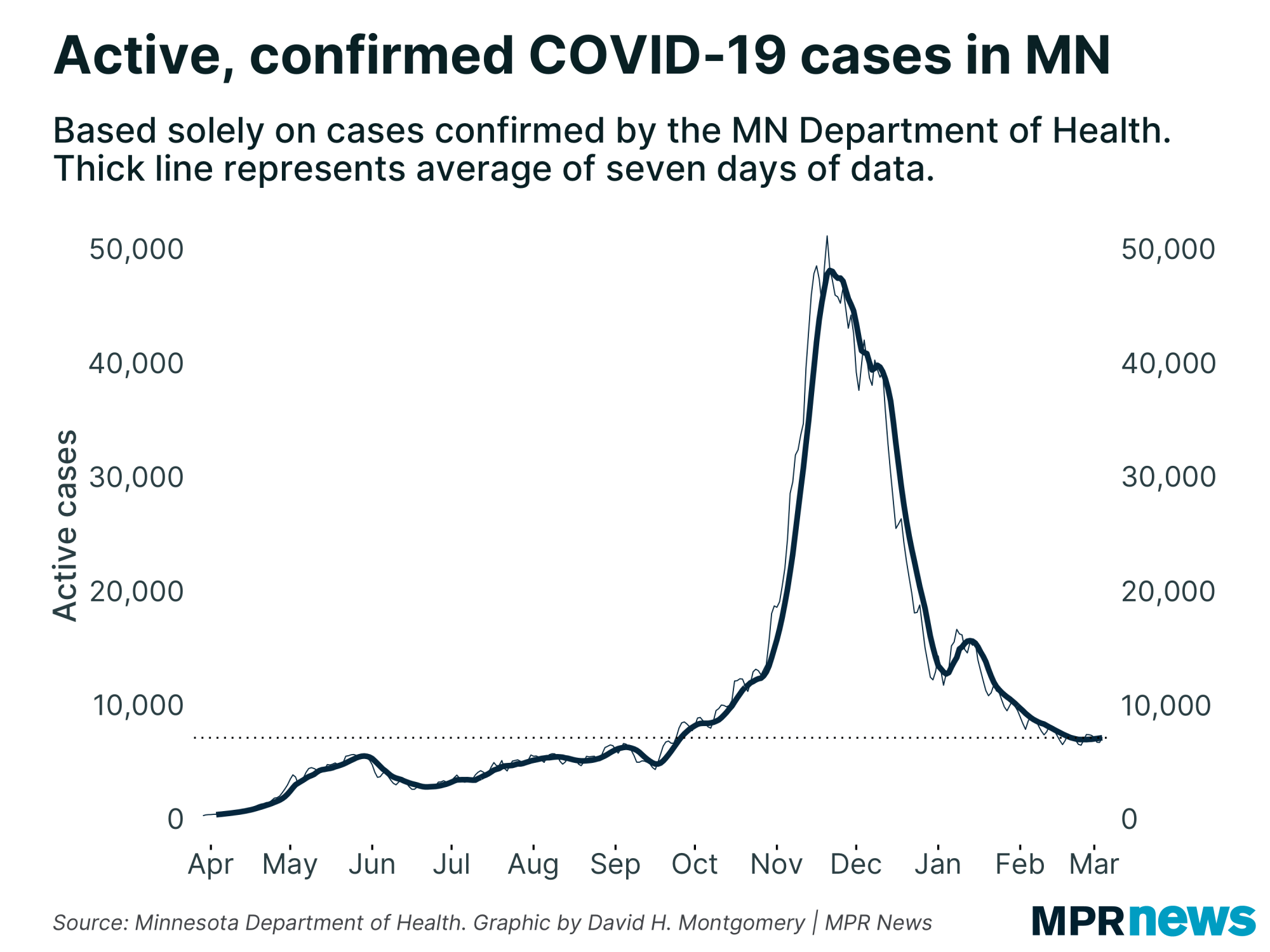 Fourteen newly reported deaths raised Minnesota’s toll to 6,521. Among those who’ve died, about 62 percent had been living in long-term care or assisted living facilities; most had underlying health problems.

Death counts have ticked up in a concerning way in recent days but it’s unclear if it’s a blip or evidence of something more concerning. The seven-day average death rate is back in double digits for the first time since Feb. 17, and has risen 4 days in a row. 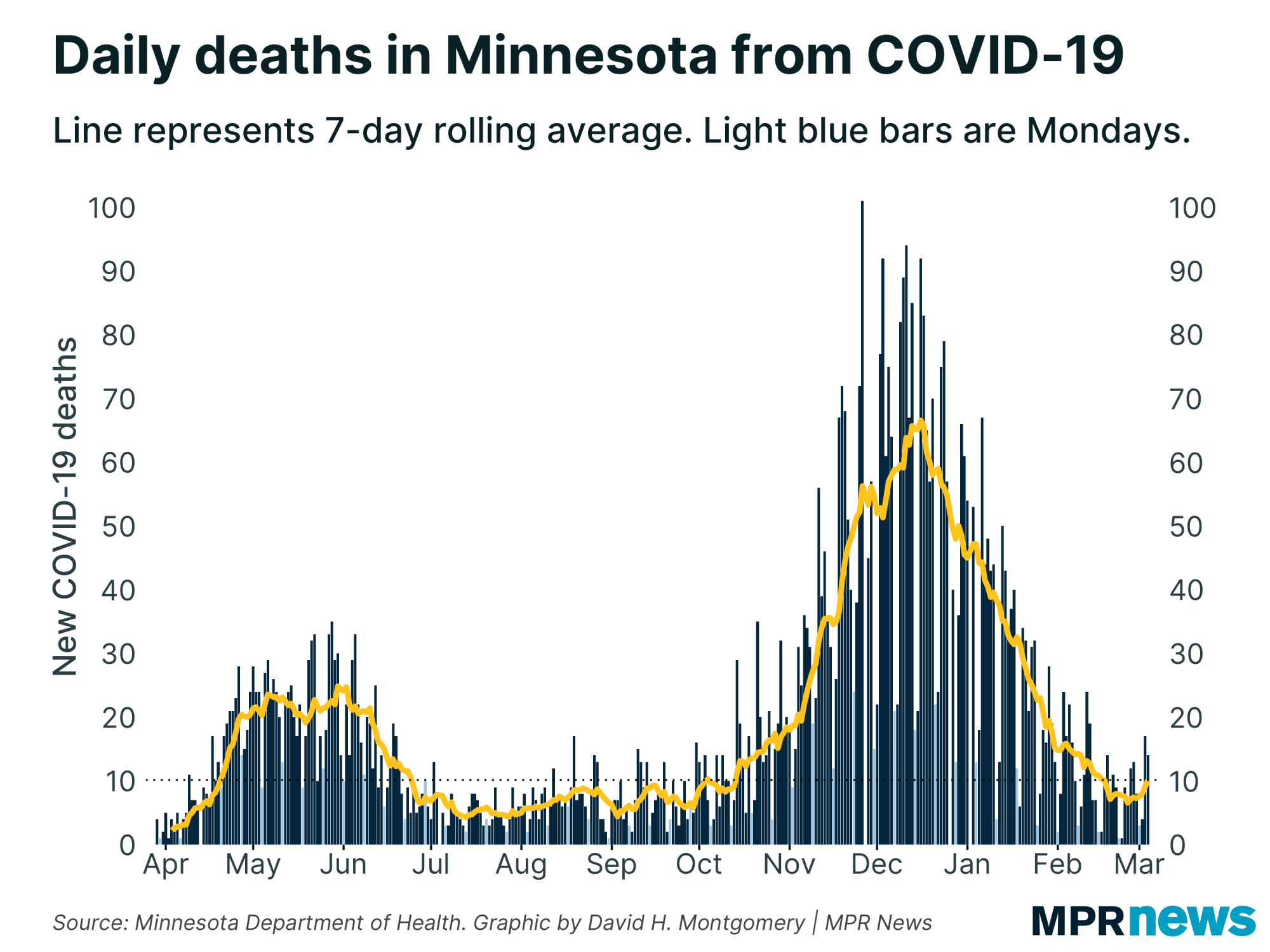 The state has recorded 487,374 total confirmed or probable cases so far in the pandemic, including 949 reported Thursday. About 97 percent of Minnesotans known to be infected with COVID-19 in the pandemic have recovered to the point where they no longer need to be isolated. 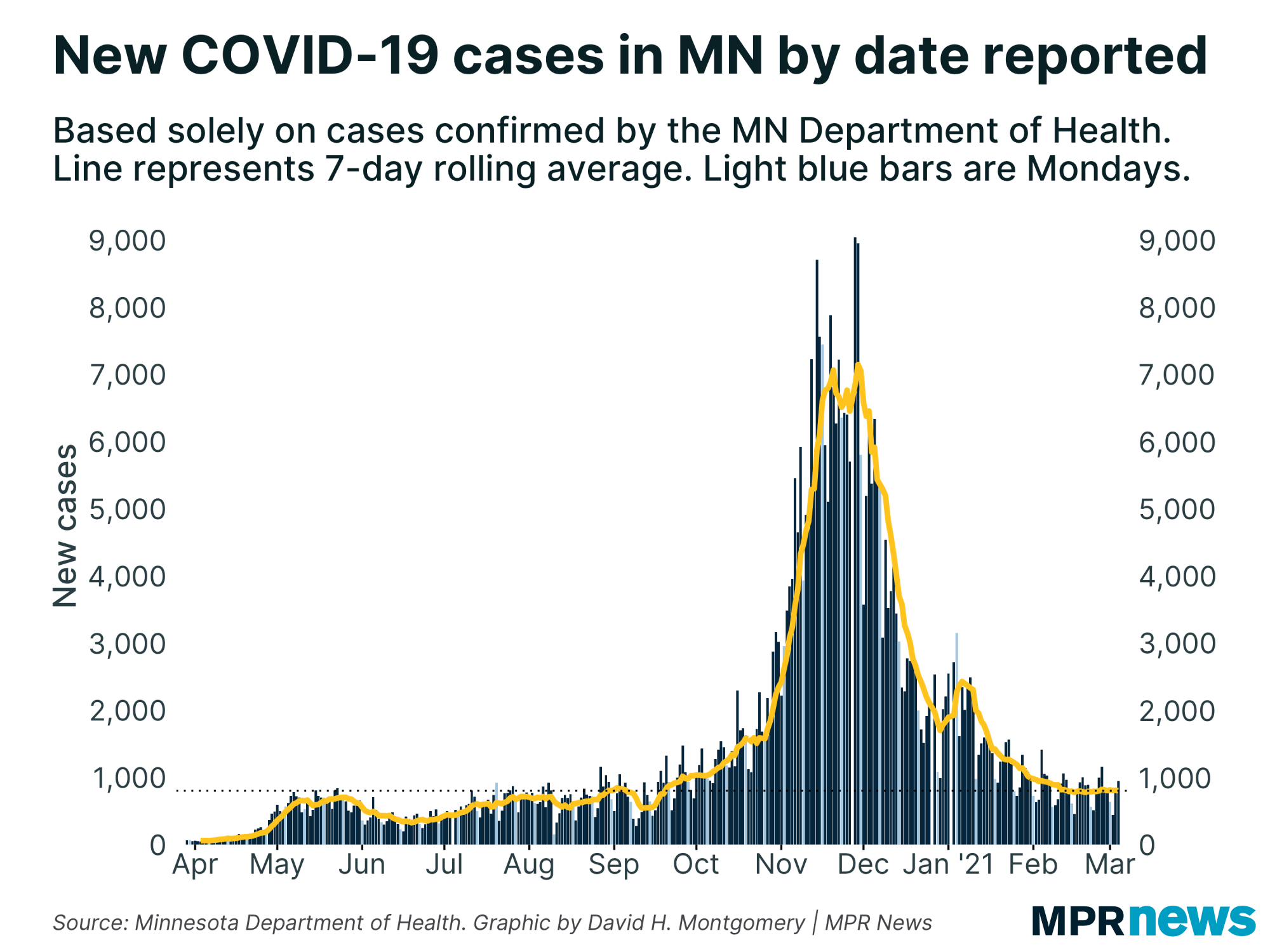 Despite recent positive trends in key metrics, officials remain concerned about COVID-19 strains with the potential to spread. Minnesota has 112 confirmed cases of the so-called U.K. variant and two cases of the Brazil variant.

State health officials continue to implore Minnesotans to stay vigilant against the disease.

People in their 20s still make up the age bracket with the state’s largest number of confirmed cases — more than 91,000 since the pandemic began, including more than 48,000 among those ages 20 to 24. 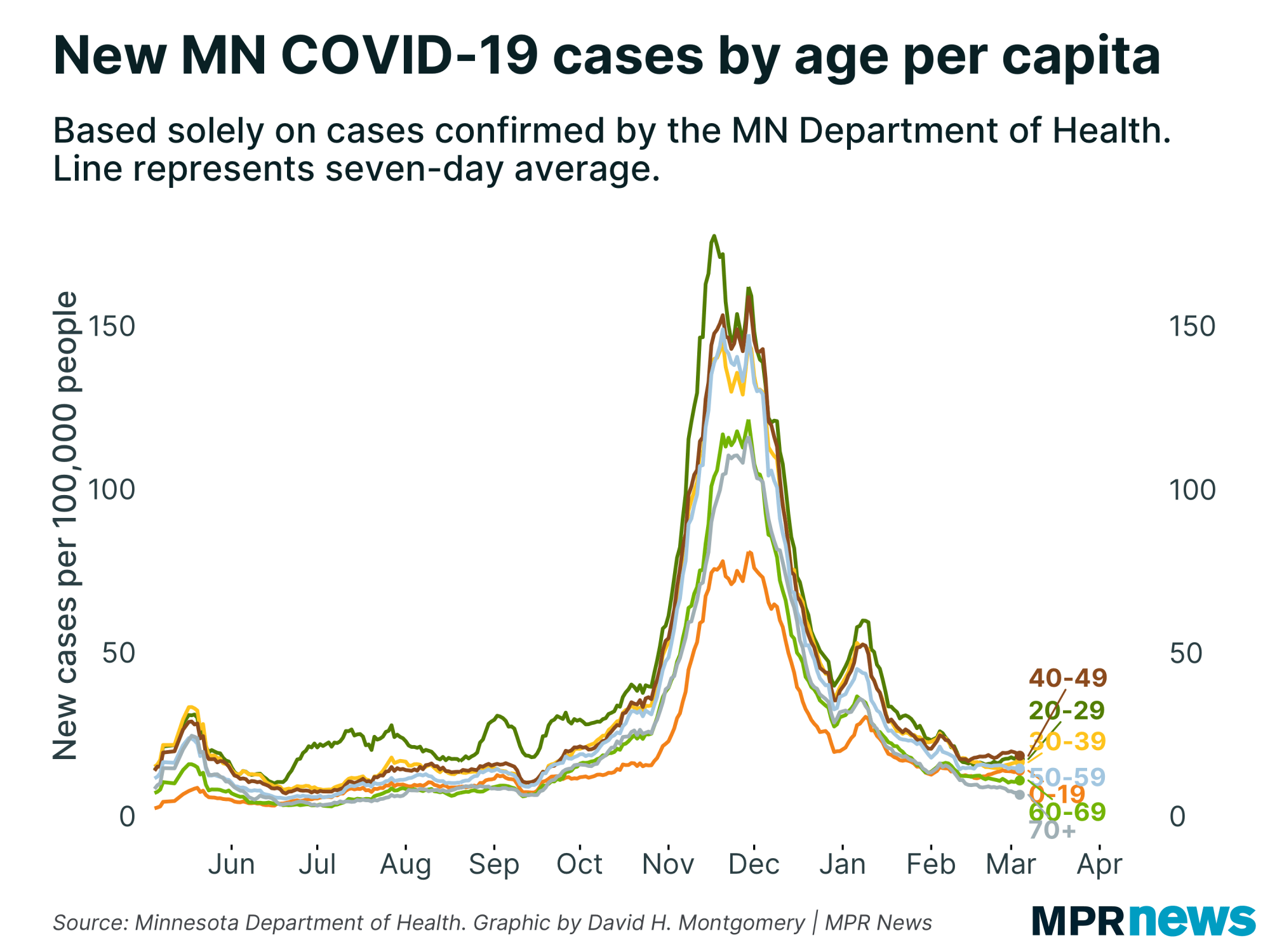 The number of high school-age youth confirmed with the disease has also grown, with more than 38,000 total cases among those ages 15 to 19 since the pandemic began.

With kids increasingly returning to school buildings and sports, Minnesota public health officials are urging Minnesota families with children to get tested every two weeks for COVID-19 now until the end of the school year.

Although young people are less likely to feel the worst effects of the disease and end up hospitalized, experts worry youth will spread it unknowingly to older relatives and members of other vulnerable populations.

Regionally, most parts of Minnesota are down significantly from the late November and early December spike, as well as a smaller January uptick. 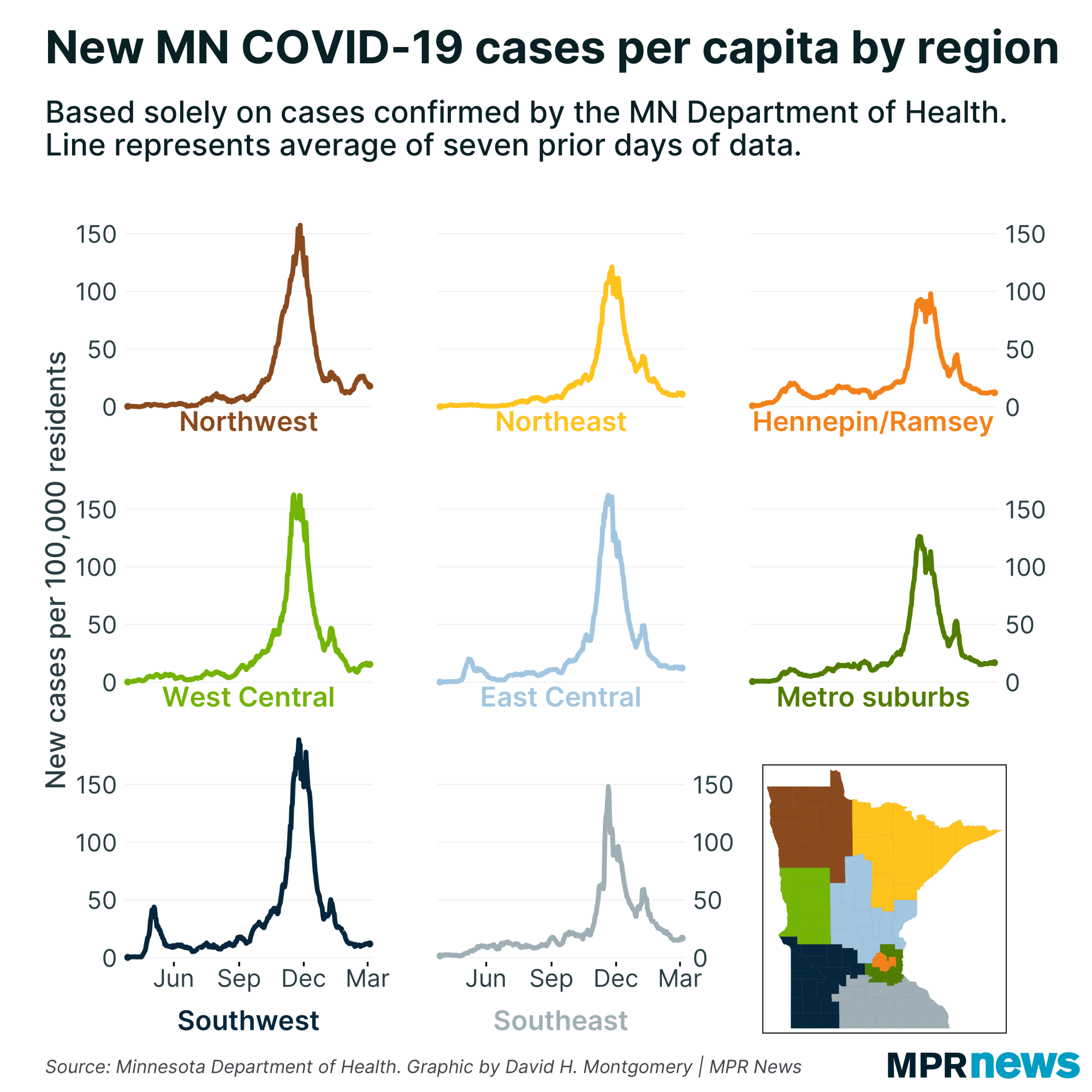 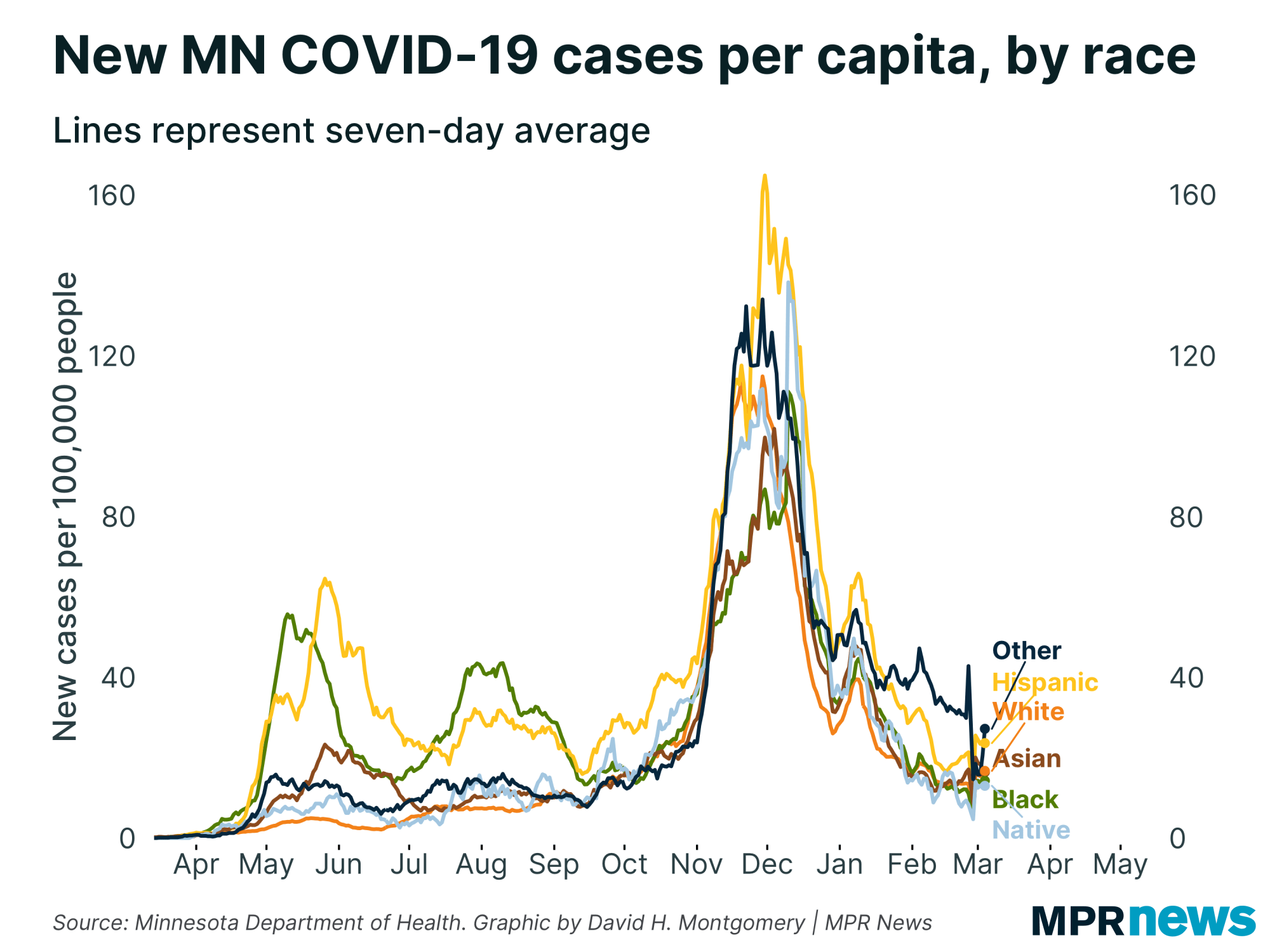 Walz has acknowledged that distrust by communities of color has been a problem during the pandemic. Officials say they will release data soon on vaccinations broken down by race and ethnicity.

The COVID-19 positivity rate in Minnesota prisons is 2 1/2 times that of the state's overall population, a new report finds.

Just under a half million Minnesotans have tested positive for the coronavirus in the last year — less than 10 percent of the population. But Corrections Department Ombudsman Mark Haase said in three of the state's prisons, more than 70 percent of inmates have been infected, leading to lockdowns and other restrictions. Minnesota has cut its prison population 19 percent as part of a COVID-19 mitigation strategy.

The Department of Corrections says 11 inmates have died of COVID-19.

"As a state, we have failed to protect people in our correctional facilities and staff from a disparate impact of the virus,” Haase said. "The impact on people in prison is a lot more severe than those of us outside. We can stay home. We can work from home and mitigate it that way while still interacting with our family, communicating, going outside. We're not on essentially what's solitary confinement."

Haase added that while he found no evidence of official wrongdoing, the department is not ready for any future disease outbreaks that could be more severe. More than a quarter of Minnesota prison staff have also been confirmed positive for COVID-19, but no staff have died.

The Corrections Department has started vaccinating high-risk inmates, those over 65, as well as prison staff.

The Minnesota Vikings are hosting a Johnson & Johnson vaccine clinic in Eagan, Minn.

State health officials say they'll have 13,400 doses of the new vaccine ready to administer in Eagan over the coming week. The allotment is nearly a third of the first shipment of the J&J vaccine to Minnesota.

The Vikings are opening up their Twin Cities Orthopedics Performance Center — their training center and headquarters — to accommodate vaccine recipients who must be health care workers or age 65 and older.

The shots are not available on a walk-up basis. The Vikings and health officials are directing people to the state's vaccine connector and vaccine locator sites to make appointments.

Online community helps people find COVID vaccine appointments: Members of a Facebook group called Minneapolis Vaccine Hunters help people across Minnesota find and sign up for vaccination appointments each day. Since it launched Feb. 1, the group has grown to more than 20,000 members.

Latino small business stay resilient through a ‘pandemic year’: Small businesses have never had it easy and over the past year, things got a lot harder — especially for the Latino business community. Now, one year into pandemic-related restrictions, some resilient small businesses are starting to look to the future.

To see the original reports and more CVOID-19 stories, follow this link to the MPR News website.  https://www.mprnews.org/story/2021/03/05/latest-on-covid19-in-mn