A pair of white-tailed deer bucks feed by waters edge at dusk. Researchers have found a commonly used insecticide in two thirds of the white tailed deer spleens collected from across Minnesota. It’s still unclear what the health effects on deer in the wild might be. Photo: Al Goldis | AP 2011

After a 2019 study in South Dakota raised questions about potential health effects on white tailed deer, the DNR asked Minnesota hunters to collect spleens from the deer they killed.

The agency received 800 spleens and testing found the insecticide imidacloprid in 61 percent of the samples.

"In the South Dakota study that we're spring boarding from, those low level exposures we know were implicated in adverse effects in deer,” said Wildlife Health Program Supervisor Michelle Carstensen. “So that's the focus of our interest, trying to really understand what does this mean for the deer and for deer health in Minnesota."

The South Dakota study did not find a direct link between the insecticide and health effects, but found a correlation between insecticide levels in deer and increased fawn mortality.

“A number of our deer had thresholds that were above what was impacting fawn survival in that captive study,” said Carstensen.

Officials said there is no evidence of any risk from the insecticide to humans who consume deer meat.

“If it is impacting fawn survival, that's something I want to be able to take in consideration when I run the population model,” said DNR research scientist Eric Michel. “So there's potential concern, depending on what we find, but right now we're still in the very preliminary stages of assessing this.”

The agency is likely to collect more spleens from targeted areas of the state during this year’s hunting season in order to get a larger sample size.

That work could set up a study to look for health effects on deer in the wild “that would actually be able to measure those effects that South Dakota witnessed in captivity,” said Carstensen. “These things are kind of one step at a time. And the very next step is really just trying to understand the results we have more clearly from this year, and then taking it to the next level.”

Research in Minnesota has also documented potential neonicotinoid effects on birds, and the insecticide has been implicated in widespread bee mortality. 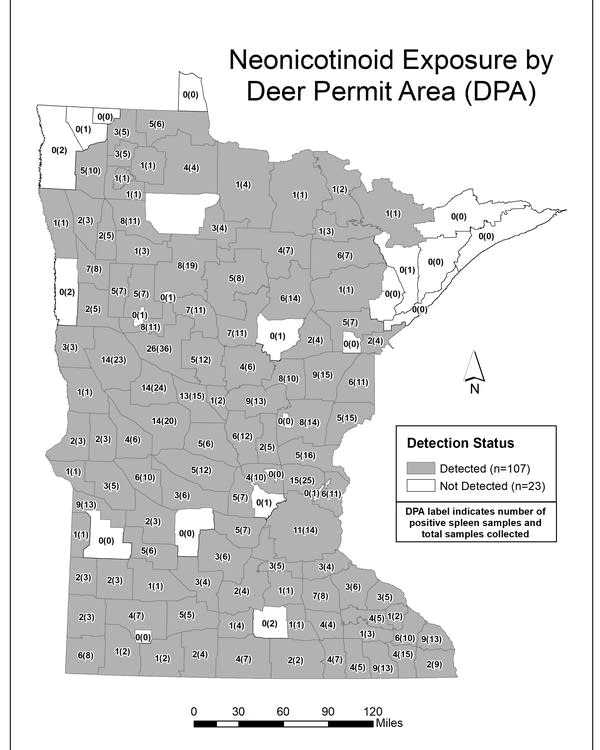 The number of samples submitted and the detection rate for neonicotinoid insecticide across Minnesota.  Courtesy Minnesota DNR


To see the original report and read related stories, follow this link to the MPR News website.  https://www.mprnews.org/story/2021/03/01/common-insecticide-widespread-in-minnesota-deer-herd
Outdoors