A student walks through the halls of Carlton High School on Tuesday while following the marked traffic flow arrows on the floor in September 2020, in Carlton, Minn. Minnesota’s three largest districts have announced plans to return middle and high school students to in-person learning. But many students won’t transition to new in-person schedules until after spring break. Photo: Alex Kormann | AP Photo 2020
By Elizabeth Shockman of Minnesota Public Radio News - March 1, 2021

When high school Principal Eryn Warne heard Gov. Tim Walz say a few weeks ago that all Minnesota middle and high schools needed to bring their students back for in-person classes by March 8, her first thought was — “I don’t think we can do that.”

Warne’s been principal of Edison High School in northeast Minneapolis for close to six years, where, prior to the pandemic, almost 1,000 teenagers attended classes in a nearly 100-year-old building.

“At first, I said it wouldn’t be possible,” Warne said of an early-March return to in-person learning. “We had been talking so much about this happening in phases and looking at bringing students back in small groups or for some targeted services. It felt like a jump from where we were.”

Warne’s students have been in distance learning since Walz closed schools statewide in March of last year. When she thought of bringing them all back, her head started spinning, thinking about the space constraints, packed cafeterias and all the shifting parts involved in safely moving hundreds of students and staff through the building seven times a day on a regular bell schedule.

For Warne’s district — the third largest in Minnesota — and many others, March 8 is just too soon to offer full in-person learning for all middle and high school students. Instead, Minneapolis Public Schools will welcome special education students back to in-person classes on March 22. Other middle and high school students will be allowed back to in-person learning in two phases, starting April 12.

Now, other districts have started to announce plans to offer in-person options for those students. But for many districts, changing learning scenarios within just a few weeks will be difficult to accomplish.

St. Paul Public Schools began offering in-person learning options to targeted groups of older students last week. But the primary learning model for grades 6 through 12 remains distance learning, and the district has not announced a timeline to bring all their middle and high school students back to in-person classes. 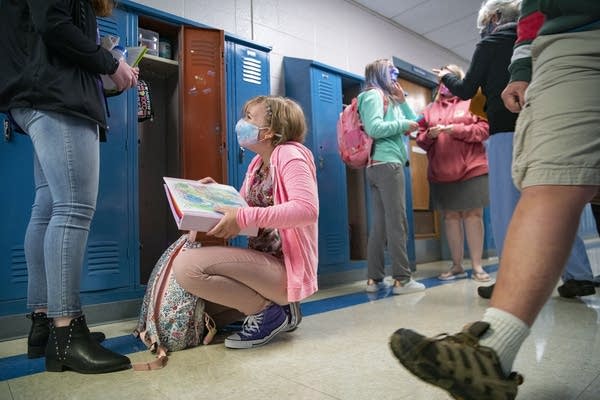 Eighth grader Amy Schwoch showed off her binder to her friend Julia Peterson on the first day of school at Carlton High School in September 2020 in Carlton, Minn.
Photo: Alex Kormann | Star Tribune via AP 2020

Anoka-Hennepin, the state’s largest district, started offering hybrid learning — a combination of in-person and virtual learning — for their middle and high school students in mid-February before Walz’s announcement, giving them a head start on Minneapolis’ and St. Paul’s in-person timeline. They, too, will be offering more in-person time for their older students, starting on March 22.

But for Anoka-Hennepin school staff, balancing virtual and in-person learning means they won’t be able to open their buildings to students five days a week. School leaders are planning to give teachers one day per week for planning and preparations, during which students will be offered take-home and self-directed instruction.

Anoka-Hennepin spokesperson Jim Skelly said staff prep time is just one of many logistical details districts like his need to work out before they announce returns to in-person learning for middle and high school students.

“Frankly, there are some things that are not that visible to the parents’ eye or the public eye,”  Skelly said. “Transportation would be one of them. ... It could be just a logistics issue that schools are going through to figure out what really makes sense — things like your spring break.”

For Warne, the Edison High School principal, the next few weeks will be filled with many logistical challenges. But she’s much more optimistic now about being able to reopen her building safely. For one thing, she knows not all of the nearly 1,000 students will be walking through her doors in April. Informal surveys indicate nearly half will choose to continue distance learning. And only about 40 percent of elementary students in the district chose to return to in-person learning when that option was offered in February. 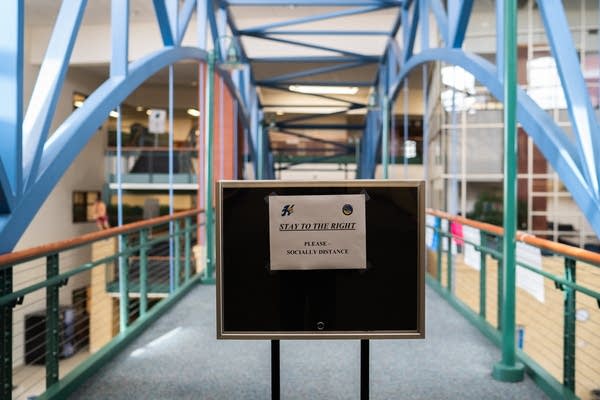 A sign reminds students to stay to the right when walking down hallways inside of Hastings High School in Hastings, Minn., in September 2020. Photo: Evan Frost | MPR News 2020

She also has to get her 99-year-old building ready to safely handle an influx of students and staff. The building’s air filters are already updated, and staff have already put up many signs to remind students to stay 6 feet apart. But she’ll have to rearrange furniture and think about traffic patterns around the school.

And one of the toughest challenges will be rearranging schedules to make sure there is time for new cleaning procedures, time to move students safely around the building, and to make sure that there aren’t too many people congregating in rooms or hallways at the same time.

Even though Warne’s district won’t be welcoming students back on the timeline Walz suggested, she said the policy change is making her and her colleagues speed up the plans they've had in place.

“These dates, they seem overwhelming, but they put a fire under you,” Warne said. “I gotta figure this out.”

To listen to the audio version of this report and see related reporting, follow this link to the MPR News website.  https://www.mprnews.org/story/2021/03/01/some-districts-will-bring-older-learners-back-later-than-wa...