For older Minnesotans, whether they're vaccinated has a lot to do with where they live Pharmacist Dan Cook prepares a dose of the COVID-19 at the Gardens of Episcopal Homes in St. Paul in December. In some rural counties, older Minnesotans are more than twice as likely to have gotten at least a first dose of the vaccine than if they live in most parts of the Twin Cities metro area.   Photo: Christine T. Nguyen | MPR News 2020

Last week, Nicole Chiabotti helped the14-bed community hospital in Cook, Minn., administer second doses of the COVID-19 vaccine to all of its patients 65 and older who wanted it.

This week, she’s helping to organize a clinic for anyone else in the area — patient or not — who’s eligible for the vaccine. They’re expecting to receive an additional 300 doses.

"I've scheduled at least 200 people personally, myself,” said Chiabotti, the hospital’s nursing director, “and I have a lot of people coming from other cities in the Iron Range like Hibbing, Aurora, Gilbert."

The Cook Hospital, in the small St. Louis County town of 515 residents, gets a vaccine allotment from the state health department. The Scenic Rivers medical clinic next door gets the vaccine from the federal government, because it provides health care in what's considered an underserved area.

"Most of the community, our community 65 and older, [has] already been vaccinated, between us and the clinic," Chiabatti said.

Statewide, people 65 or older — as well as health care workers, educators and child care workers — are eligible to be vaccinated. But as the state’s vaccination efforts continue, they are significantly limited by a supply that runs far short of demand — an issue that has plagued health departments nationwide, and frustrated patients eager to get their shot.

And in Minnesota, whether people 65 or older have gotten a vaccine for COVID-19 yet depends, in large part, on where they live.

In some rural Minnesota counties, older residents are more than twice as likely to have gotten at least a first dose of the COVID-19 vaccine than if they live in most parts of the Twin Cities metro area. But even in rural parts of the state, there are significant differences from county to county. 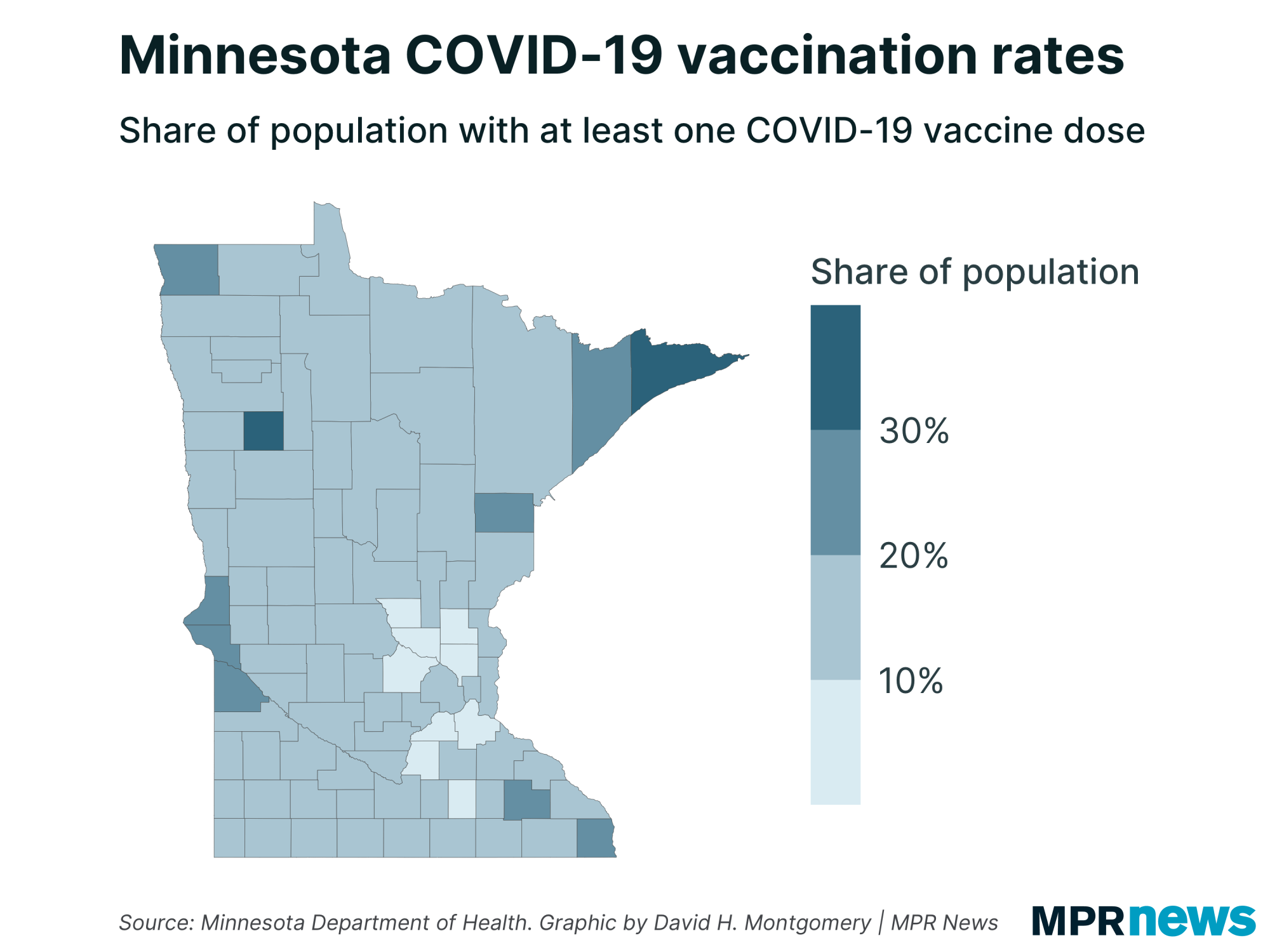 Chiabotti said people from Duluth and even the Twin Cities, 3 1/2 hours away, are scheduling vaccine appointments at her hospital for their most recent batch of the vaccine. Many, she says, have cabins in the area, which is how they learned that vaccines were available.

"They're so happy and so grateful,” she said. “And they all feel like they're very lucky, compared to what they're seeing on TV."

What they're seeing, she said, is reports of people around Minnesota who haven't been so fortunate. They’re seeing people who are growing increasingly frustrated as they wait — while they see family, friends and strangers on social media getting vaccinated.

Many of the places in Minnesota with the highest vaccination rates for people 65 and older are in rural areas, like Cook, that receive multiple streams of the vaccine.

Mahnomen and Red Lake counties, for example, have vaccine coming in from the state and the federal governments, to clinics, pharmacies, local health departments and Indian Health Service facilities. Both are among the top five counties statewide with the highest vaccination rates among residents who are 65 and older.

But other rural counties owe their success at least, in part, to luck.

For several weeks early in its rollout to recipients 65 and older, the Minnesota Department of Health split up vaccine supply among small and midsized health care providers through a lottery system. That meant, in any given week, some hospitals got hundreds of doses, while others got none.

Liz Sorenson directs Ortonville Area Health Services in far western Minnesota’s Big Stone County, where as of Sunday, more than 62 percent of seniors had gotten their first shot — the fourth-highest rate of 65-plus vaccinations in the state.

"And we just have been lucky enough to have gotten part of that lottery system,” Sorenson said. “Many of our neighbors were not as lucky."

That includes Watonwan County, southwest of Mankato, which has one of the lowest vaccination rates in the state.

Jeff Mengenhausen is CEO of Madelia Community Hospital and Clinic in the county. They’ve received enough vaccine for health care providers and area teachers. But he said his hospital is still waiting on its first shipment of the vaccine for patients 65 and older.

"And all the rural hospitals, including us, we have plans, we have people, staff, we're ready to go,” he said, “but we just do not have the vaccine."

So last week, the state shifted back to a system in which eight regional health care coalitions help allocate the vaccine among local providers. 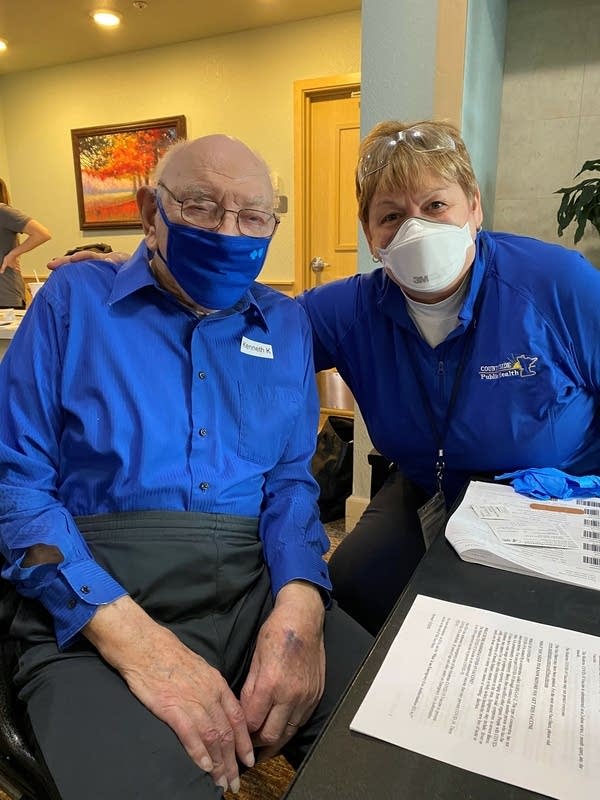 Each week, the state Health Department receives an allocation of vaccine from the federal government, which it in turn allocates among several entities, including the eight regional coalitions.

From there, said Shawn Stoen, the preparedness coordinator for the state’s west-central region, the coalitions meet to determine how to distribute their allocation to health care facilities within the region that week.

“The vaccine is not under the ownership of the facilities [or] agencies — it is the communities’ vaccine,” Stoen said.

They take into account several factors, including the size of each county’s 65-plus population and how many people in that population have been vaccinated.

Ann Jenson helps manage the southwestern Minnesota coalition, which hosts regular meetings with all the providers in the region. She said some hospitals in the region went three weeks without receiving any vaccine for their older residents. But she hopes the coalition model can help ensure a more equitable distribution.

"That is our hope,” she said. “One hundred percent yes. I mean, we've been able to fill those gaps, like those three hospitals that didn't get any [vaccine] — they were our first ones that got our first allotment."

She’s glad the state moved back to the coalition model. In the old system, the hospital in Dawson, where she lives, didn't get any vaccine for three weeks, while the hospital the next town over, in Madison, got hundreds of doses.

"There just wasn't any equity to that system," she said.

Available vaccine supply has played a major role in determining which counties have gotten the most shots into arms. But it's not the only factor. Carrie Henning-Smith, who directs the University of Minnesota's Rural Health Research Center, said small-town networks — among providers, public health and individual patients — make a difference.

"People are more likely to be connected with their local clinic, their local health care system,” she said. “There's less confusion about ‘which system do I go with,’ because you have fewer systems to choose from in the first place."

Plus, she said, word travels fast in small towns when the vaccine is available.

Sorenson, of Ortonville, said people are also less likely to fall through the cracks in rural places.

One older patient, in particular, sticks in her mind. She knew he would want to be vaccinated, she said — but she couldn't get hold of him. So she got in touch with his in-home health provider.

"I knew that the home health nurse maybe had a good number to get hold of their daughter, or their son, to see if they wanted to be vaccinated,” she said. “And so it's those connections that we have." 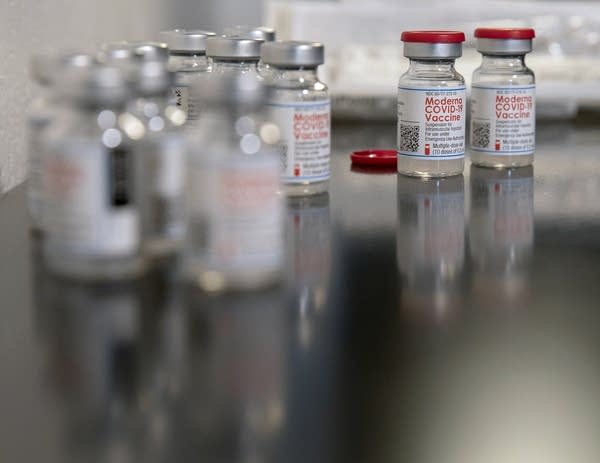 Vials of Moderna COVID-19 vaccines sit on a table at United Family Medicine in St. Paul in January. In Minnesota, whether people 65 or older have gotten a vaccine for COVID-19 yet depends, in large part, on where they live. Photo: Christine T. Nguyen | MPR News file

Cook County, on Minnesota's far northeastern tip, has the state's highest vaccination rate: As of Saturday, nearly 90 percent of people 65 and older there have gotten at least one dose.

“Sometimes you think about being in a very rural remote place. And in some ways with a pandemic, that's a weakness,” said Grace Grinanger, the county’s public health supervisor. “If we have to transfer someone to an ICU level of care, they have to go two to three hours to Duluth. So that feels like a real vulnerability.”

“But when it comes to being able to work together and reach out to our community, I feel like we have an advantage. And we have a strength in the collaborative relationships that we've been building for many years.”

Those relationships can also help convince people to get the vaccine who may be wary of it. That’s especially important in rural communities, where research has found residents are more likely to say they don’t trust the vaccine.

In Cook County, the public health department created a campaign designed to make residents feel proud to get vaccinated — to encourage people to get the shot not just for themselves, but for the health of the community.

“So we have buttons, we have a big banner up thanking people for coming [to get vaccinated],” Grinager said. “It’s kind of strange to say that mass vaccination is fun, but it really is fun. People just look really happy, like they've been waiting for this to come.”

And, when rural hospitals and public health agencies prove they can get the vaccine to patients within the three-day period the state has set as a guidepost, they're likely to get more doses in the future. Both the state Health Department and the regional coalitions say that’s an important factor in allocating the vaccine.

Liz Auch with Countryside Public Health, which serves five counties in far west-central Minnesota, said she believes that’s helped her agency continue to get robust supplies of the vaccine.

“This will sound like I'm bragging, but we are getting them in within the three days, you know what I mean? We have always gotten our vaccine out within the three-day window, we have met every guideline that the state is given. And I have to assume that that has helped us continue to get first doses.”

If some rural communities are getting seemingly disproportionate allocations of the vaccine, that’s as it should be, argues the U’s Henning-Smith.

"Rural residents are older, on average, than urban residents,” she said. “And as we're prioritizing older adults, and health care workers, we should be seeing higher rates of vaccination in rural places."

She says there should also be higher rates for people of color, who like people in rural areas, are statistically more likely to have more underlying health conditions that make them vulnerable to the worst of COVID-19.

"I wish we were not seeing the type of variability that I'm seeing,” she said. “But it does not seem like there's a uniform story across the country, or even within Minnesota from one rural place to another."

Bottom line, she said: There just aren't enough vaccine doses to go around right now, in small towns or in big cities.

To hear an audio story of this report and see related COVID-19 reporting, follow this link to the MPR News website.  https://www.mprnews.org/story/2021/02/23/for-older-minnesotans-whether-theyre-vaccinated-has-a-lot-t...