Stickers are handed out as COVID-19 vaccines are administered to veterans Wednesday at the VA Medical Center in St. Cloud, Minn.    Photo: Paul Middlestaedt for MPR News

Minnesota maintained its COVID-19 vaccination pace over the weekend with no sign — yet — of the effects of weather-delayed vaccine shipments.

Those could appear in Monday’s update, after some vaccination appointments in Minnesota over the weekend were postponed due to those delays. There’s a lag time of a couple days in reporting vaccination data.

Averaged over the past week, the number of vaccine doses administered each day ticked upward slightly on Sunday, to just under 30,000. 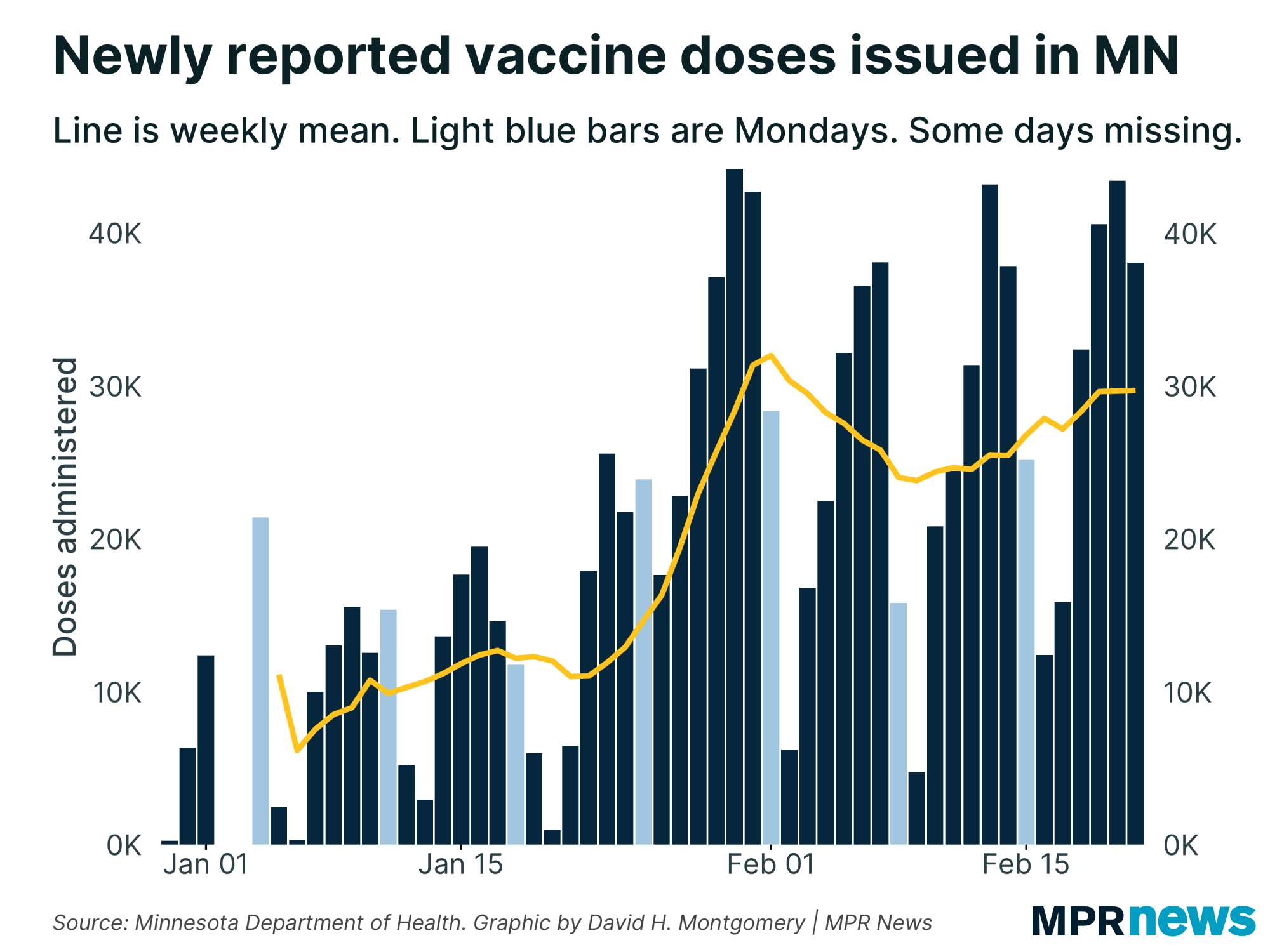 More than half of the new COVID-19 vaccinations reported Sunday were second doses, allowing people to complete their vaccinations. The number of people getting their first vaccine dose has been falling in recent days.

The total number of COVID-19 vaccine doses administered in Minnesota now stands at 1,097,679. 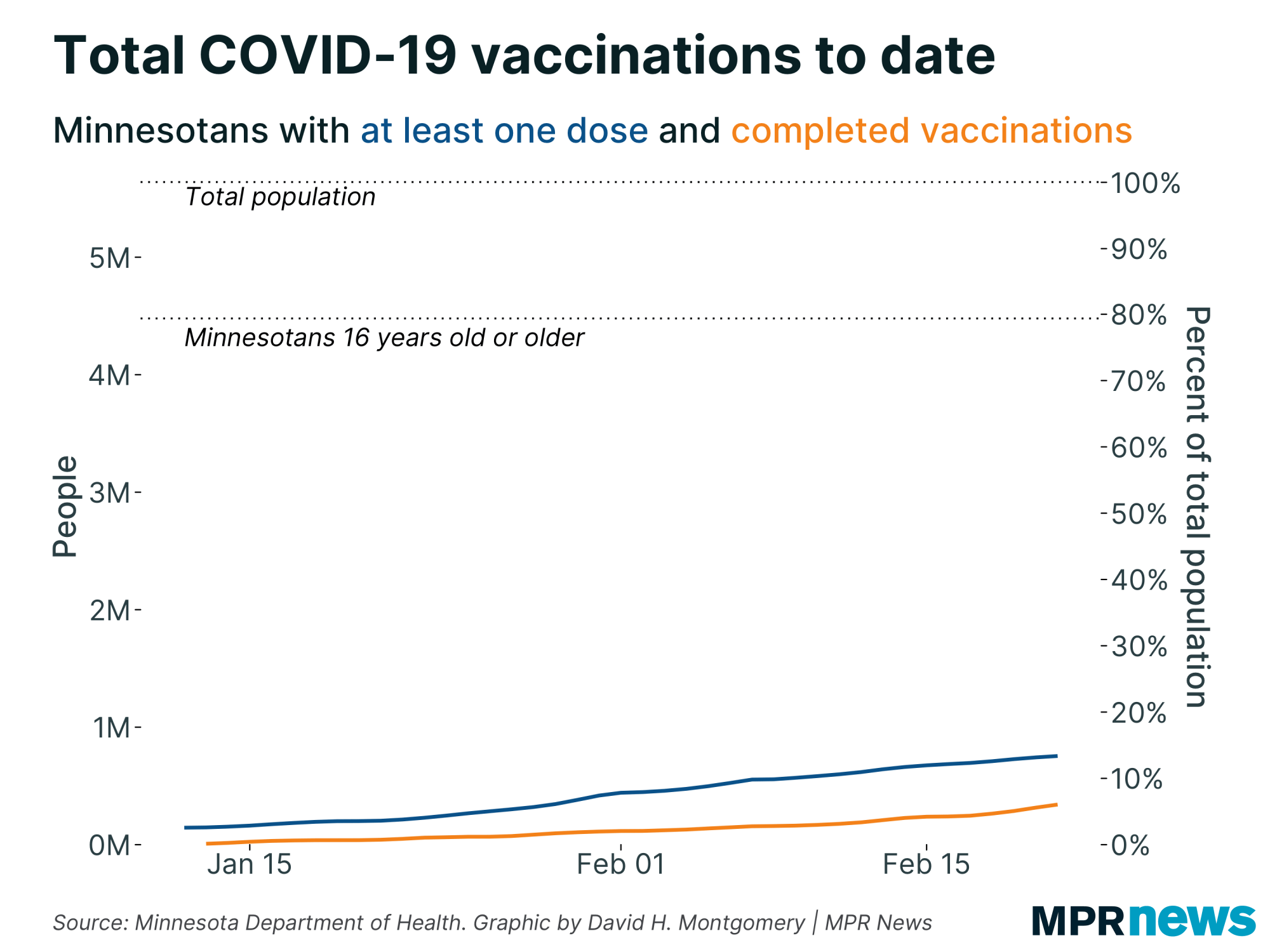 Minnesota is currently ranked 17th among states in doses administered per 100,000 people, according to data collected by the federal Centers for Disease Control and Prevention. That’s an improvement from 20th in the previous update.

But at the current pace, Minnesota would only be able to vaccinate about 80 percent of adults by sometime in September. Getting it done by summer would require the state to administer 40,000 to 50,000 shots per day, or more.

State health officials say limited supplies of vaccine from the federal government are hindering efforts to increase the pace of vaccinations. 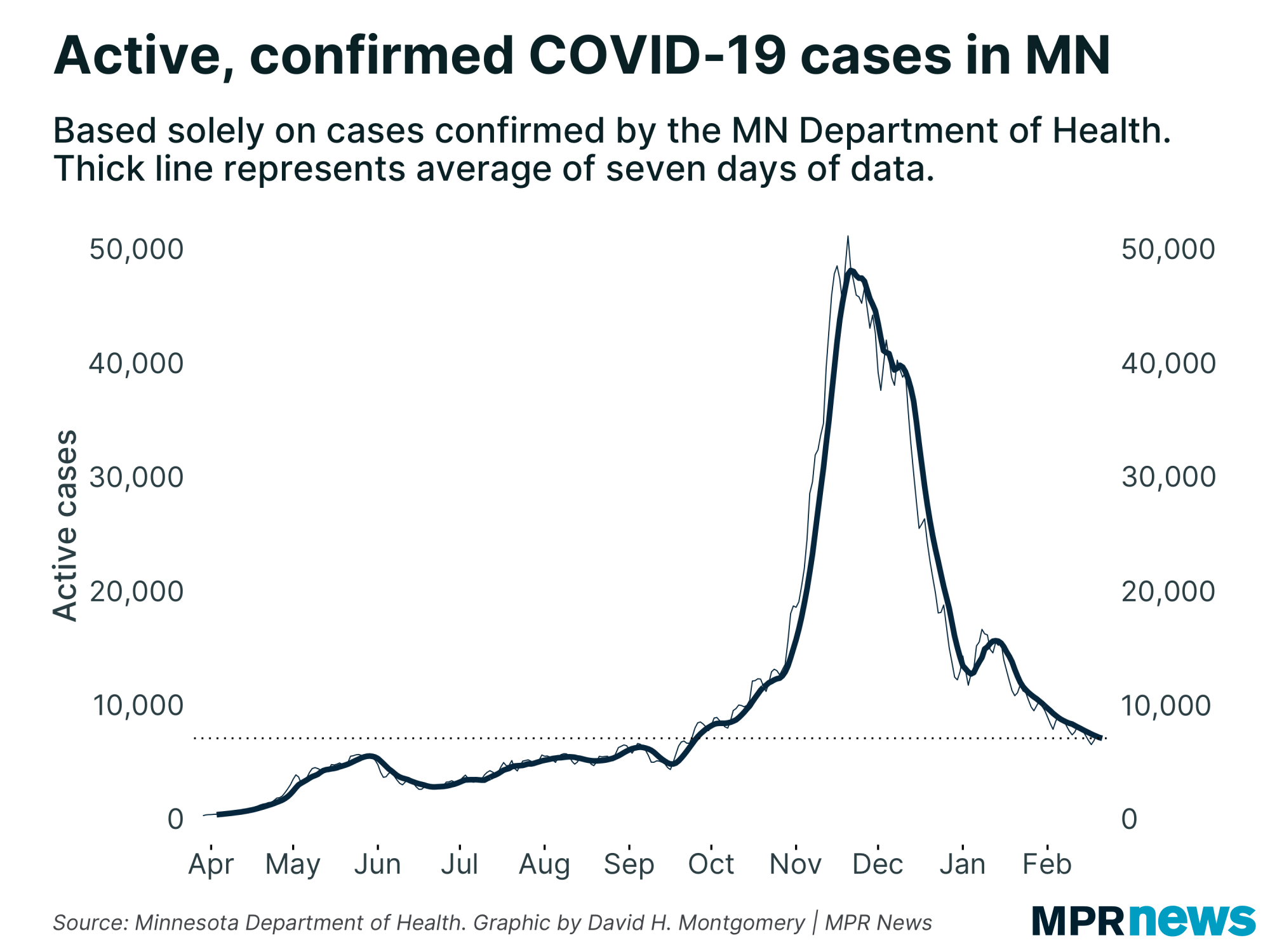 Key pandemic metrics in Minnesota continue to improve. Known, active cases held steady Sunday at just over 7,200, but the overall trend is solid, hovering around late September levels. The seven-day hospital admissions trend for people with COVID-19 has also receded to September levels. 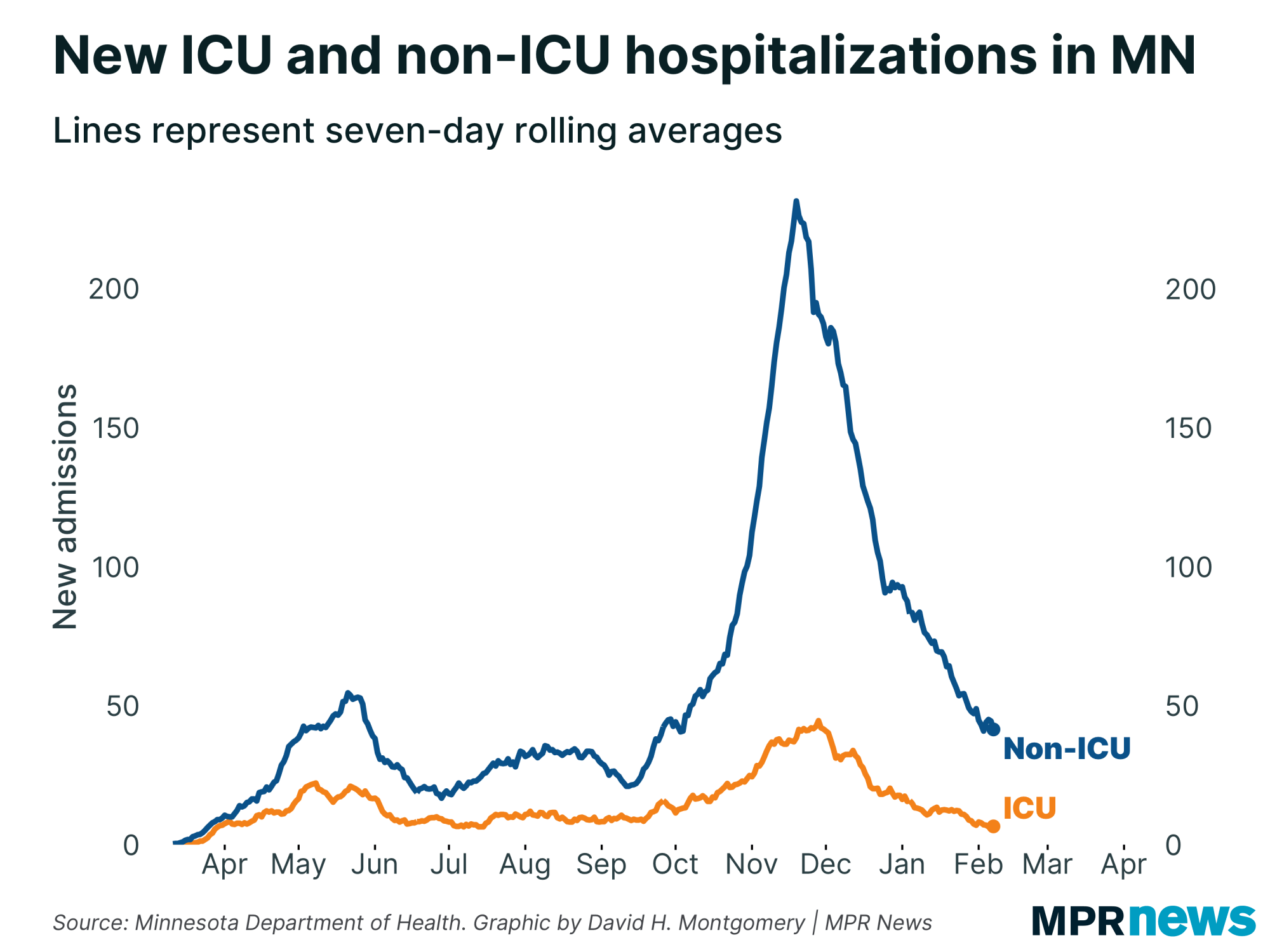 Nine reported deaths on Sunday raised Minnesota’s toll to 6,432. Among those who’ve died, about 63 percent had been living in long-term care or assisted living facilities; most had underlying health problems. 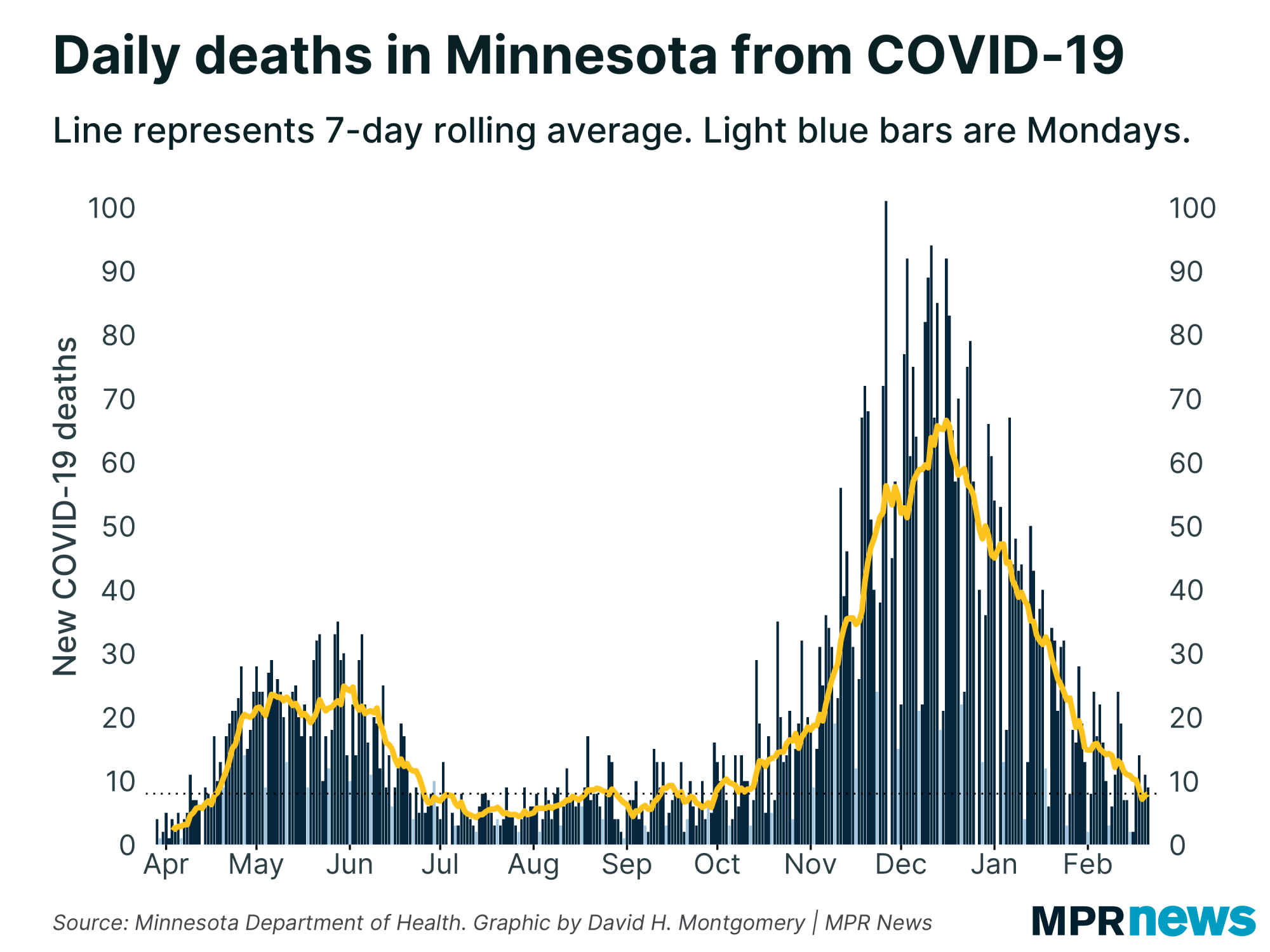 The seven-day rolling average for deaths is at eight deaths per day, near the lowest since September.

The state has recorded 479,036 total confirmed or probable cases so far in the pandemic, including 891 reported Sunday. About 97 percent of Minnesotans known to be infected with COVID-19 in the pandemic have recovered to the point they no longer need to be isolated. 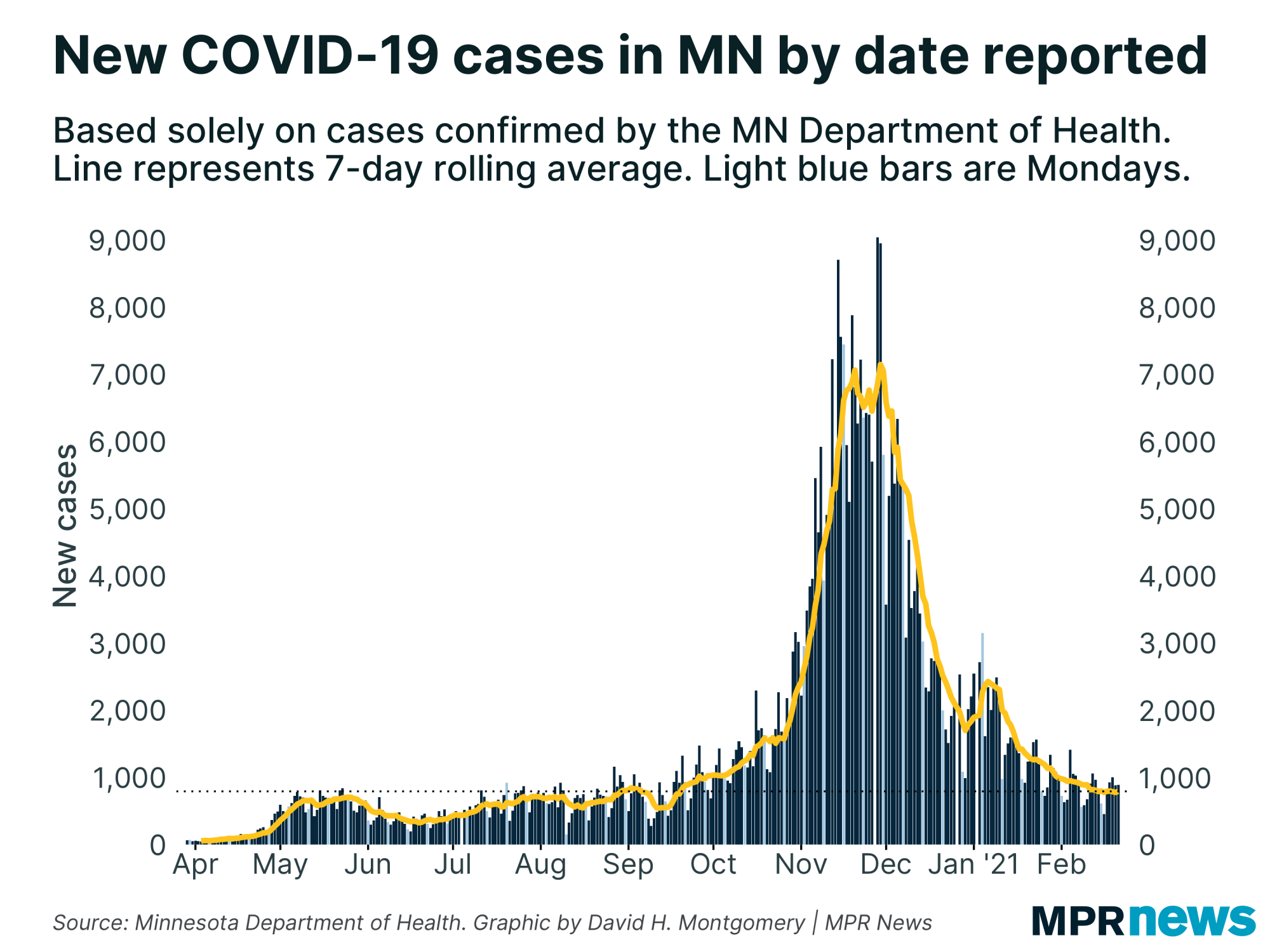 State health officials continue to monitor new virus strains circulating in the United States, which may be more contagious.

People in their 20s still make up the age bracket with the state’s largest number of confirmed cases — more than 90,000 since the pandemic began, including more than 47,000 among people ages 20 to 24. 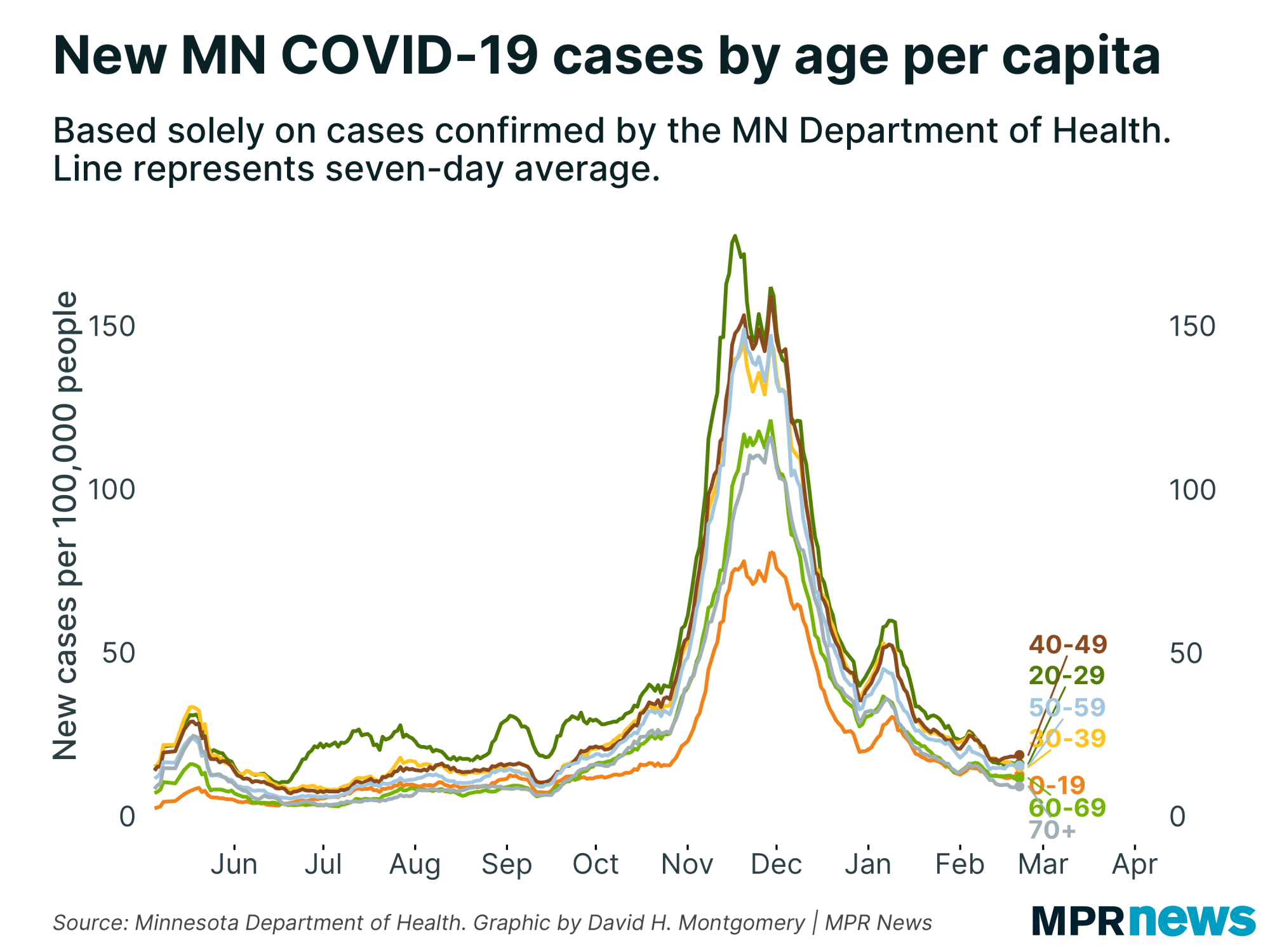 The number of high school-age youth confirmed with the disease has also grown, with more than 37,000 total cases among those ages 15 to 19 since the pandemic began.

Although less likely to feel the worst effects of the disease and end up hospitalized, experts worry youth and young adults will spread it unknowingly to older relatives and members of other vulnerable populations.

Regionally, most parts of Minnesota are down significantly from the late November, early December spike as well as a January blip.

There has been an uptick in cases in northwestern Minnesota recently, though it’s unclear why just yet. 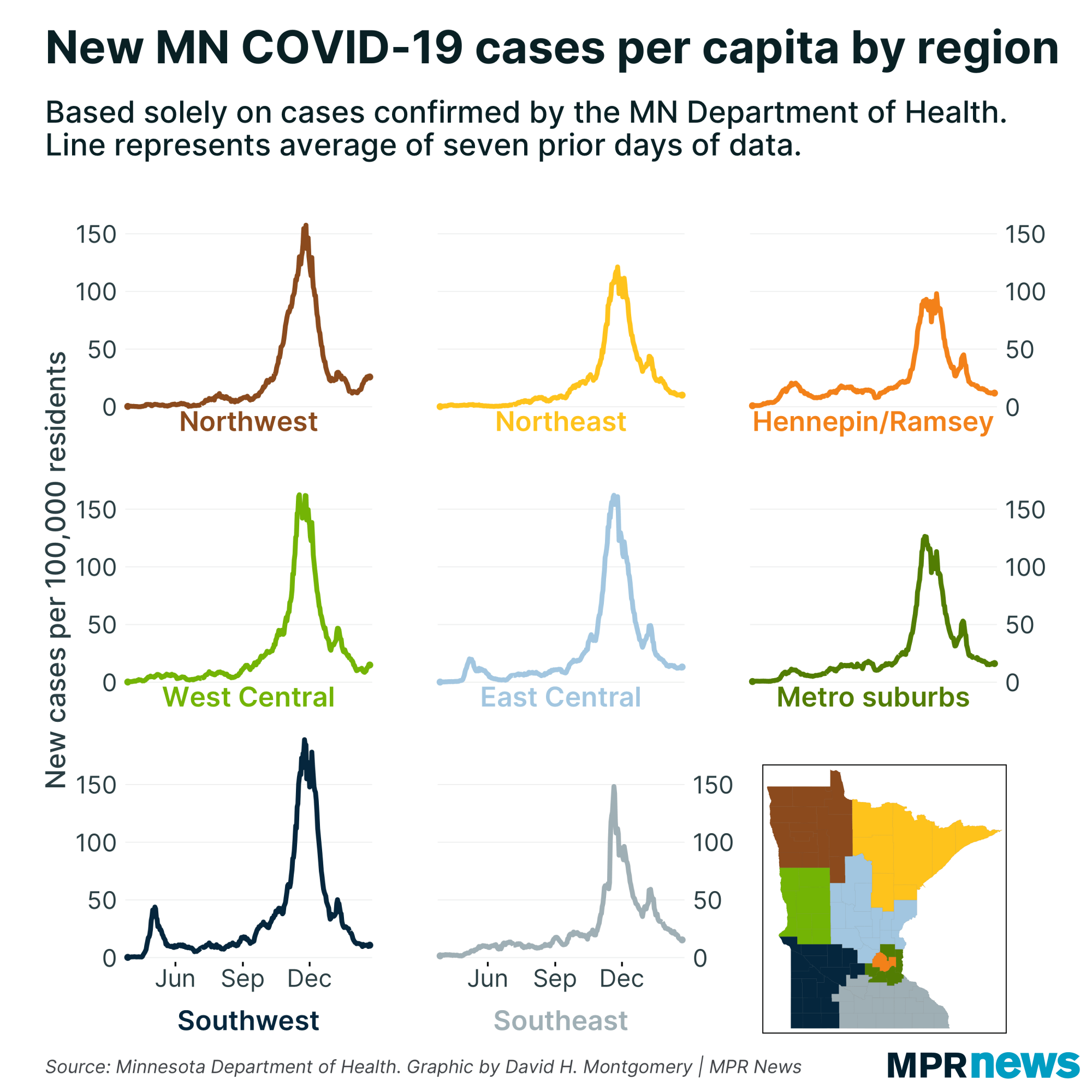 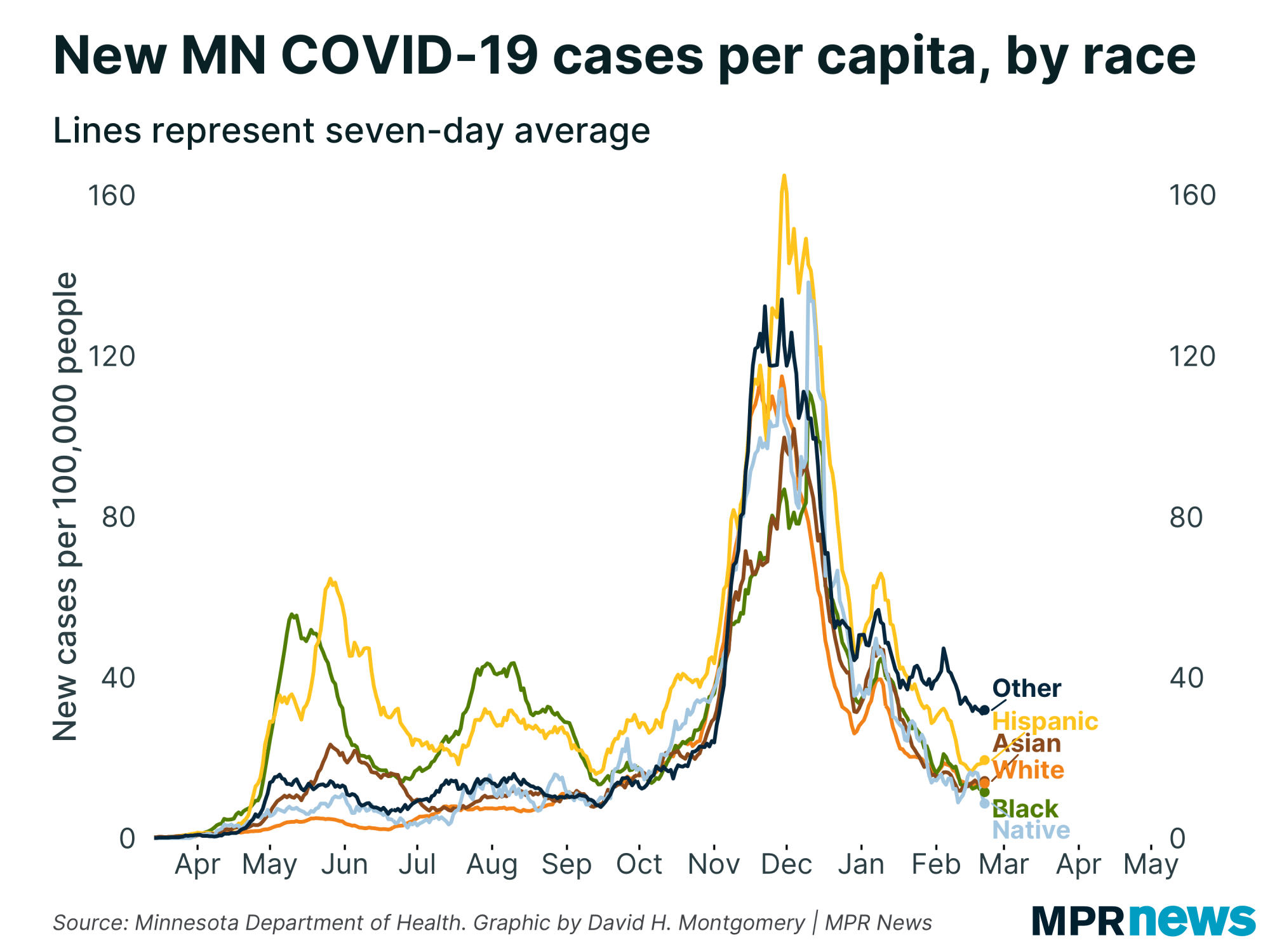 Even as new case counts continue to fall from their late November, early December peaks, the data shows Latino people continue to be hit hard.

Data in these graphs are based on the Minnesota Department of Health's cumulative totals released at 11 a.m. daily. You can find more detailed statistics on COVID-19 at the Health Department website.

Klobuchar speaks out about vaccine misinformation

Minnesota Democratic U.S. Sen. Amy Klobuchar joined a local physician and health care administrator on Sunday in the Twin Cities to urge people to accept the science behind COVID-19 vaccines.

Klobuchar said that as more people become eligible for vaccination against the coronavirus, a big challenge will be convincing them to get the protection to help bring the pandemic under control.

She said social media companies, including Facebook, need to do a better job combating falsehoods being circulated to scare people away from the vaccines.

"One of the things that is really holding us back in our country, not just our state, is a lot of people are refusing to get the vaccine — and that's their right, but they need to know that a lot of this is based on misinformation," Klobuchar said.

"These vaccines are safe. You should follow medical advice by looking on the websites for the CDC, on the Allina website, any reputable medical organization, the state of Minnesota — to get the facts not only about distribution but also about what's happening about misinformation about the vaccine," she said.

Klobuchar said a provision in the the latest pandemic relief package would funnel $1 billion to broadly help fight misinformation, including about health care.

A weather-delayed shipment of 9,000 doses of the COVID-19 vaccine made it to Minnesota late Friday after a roundabout journey.

In a Twitter thread posted Saturday afternoon, Gov. Tim Walz recounted the saga. He said the doses were supposed to make a relatively short trip from Illinois to Minnesota, but an alert Minnesota National Guard captain tracking the vaccine on Friday morning noticed it had been diverted to Texas for reasons unknown.

There was extra concern given the power outages in the southern U.S., and the need for the vaccine to be stored at extremely low temperatures.

Walz said he spoke with White House officials to sort out the problem, and they were able to work with FedEx to redirect the doses to Memphis, Tenn., and then on to the Twin Cities.

Mixed opinions on how to allocate Biden aid money:President Joe Biden and other Democrats want the federal government to send most Americans another $1,400 to help them weather the pandemic. But some economists, and even some people set to get the cash, say a better approach would be to target those most in need.

Isolated and at risk, veterans hope COVID vaccine brings return to normalcy: About half of U.S. veterans are over the age of 65 and many have underlying health complications, making them especially vulnerable to the coronavirus.

To see the original posts and read more COVID-19 reporting, follow this link to the MPR News website.  https://www.mprnews.org/story/2021/02/22/latest-on-covid19-in-mn