Ty Olson stands in frond of a frozen waterfall in Voyageurs National Park on Feb. 13. Olson is skiing 250 miles across northern Minnesota in an effort to draw attention to Native justice issues around land and poverty.   Photo: Courtesy Ty Olson

Ty Olson grew up in the windswept Red River Valley of northern Minnesota and North Dakota, so he knows something about bitter cold and biting winter winds.

But the last eight days gave him a new appreciation for what it means to be cold.

He began his trip in Voyageurs National Park last week, just as the sub-zero weather set in, skiing about eight hours a day while towing two sleds with the 150 pounds of supplies that will sustain him for the 250-mile trip. He’s traveling across the frozen lakes and rivers of the U.S.-Canadian border toward Grand Portage, a trip he expects to take him till the middle of March.

It's more than just a physical challenge for the 32-year-old filmmaker: Olson is skiing for a cause.

Trekking through the bitter cold, he said, is appropriate, because he’s skiing to keep other people warm. He’s raising money to help heat homes on the Pine Ridge Indian Reservation in South Dakota.

By Thursday, Olson was on Crane Lake, not far from International Falls. It will likely likely be his last stop with cell phone service for several days. He sat on a sled enjoying the sunshine, calm winds and the barely above-zero temperatures. 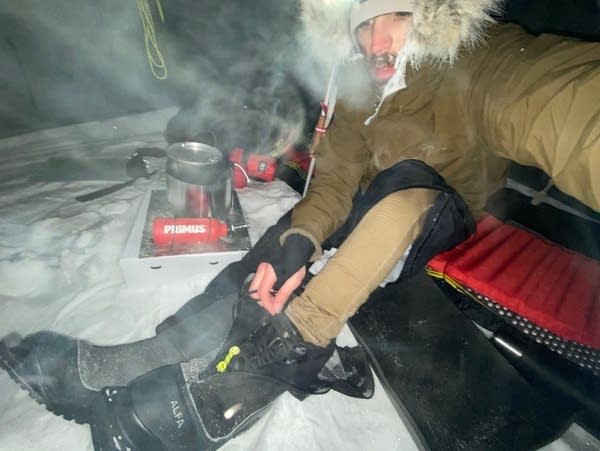 Ty Olson is skiing alone for 250 miles across northern Minnesota in an effort to draw attention to Native justice issues around land and poverty. He took this photo on Feb. 13, while setting up camp on Rainy Lake.  Photo: Courtesy Ty Olson

"When you have a week of -30, everything else feels fine,” he said with a laugh. “So I'm feeling really good. This next week, I'm actually concerned about being too warm and just sweating. I'm probably gonna be shirtless next week."

Temperatures are expected to rise above freezing over the weekend and into next week. But Olson prefers the cold, because he needs solid ice to safely complete his trip. It has also kept him focused on the people he’s trying to help.

“I'm skiing for firewood because people in Pine Ridge want it, need it, and ask for it. But they want more than that,” he said. “They want justice. I feel obligated to use my privilege to give voice to that.”

Even on nights when the temperature has dipped to -40 degrees, Olson has stayed warm in a four-layer sleeping system, with five zippers and 11 drawstrings.

"The cold really isn't the problem. It's just the feeling of being so constricted,” he said. “And then the ice cracking beneath the tent. The ice just booms and cracks all night long in these temperatures. And then of course the wolves howling every night.”

He sleeps 10 hours a night, but it's a tenuous rest, sleeping mostly on frozen lakes.

“Sometimes you wake up with a bit of a chill and you just have to force yourself to go back to sleep,” he said. “The worst part though is when you wake up at 2:30 in the morning having to pee and it's -40 outside." 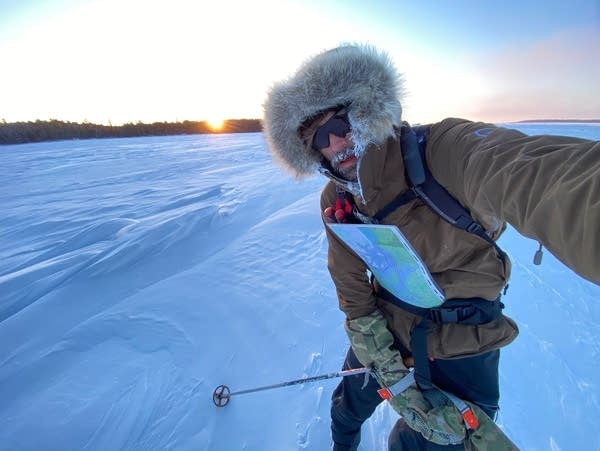 Ty Olson took this selfie on Feb. 14 on Rainy Lake, when the air temperature was -35 degrees.
Photo: Courtesy Ty Olson

So far he's averaging about eight miles a day. He hopes to pick up that pace as he works through his supplies, and he’s pulling a lighter load.

Olson said he’s eating 3,800 calories a day now, and will increase that to about 5,500 calories as the trip progresses.

His favorites are the food his mom sent along: “Blueberry soup, which is a classic Swedish hot fruit drink that my mom put together. That has been the pleasure of my day, that and these homemade chocolate truffle balls.”

He's now entered the Boundary Waters Canoe Area Wilderness, and hopes to arrive in Grand Portage by mid-March. He very purposely chose the route, through some of the most undeveloped land left in Minnesota. 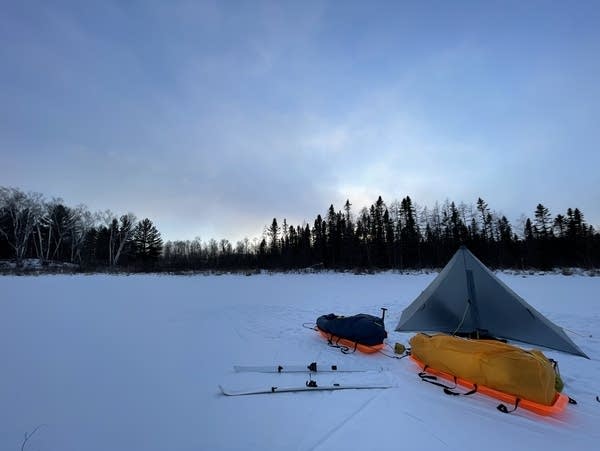 Ty Olson is towing two sleds with food and gear as he skis 250 miles across the top of Minnesota.    Photo: Courtesy Ty Olson

“Where else can we find an undeveloped route of this length in the Dakota/Lakota/Ojibwe territory? We settled, cut over, and farmed everything else. What lasting legacy has that had for Native peoples?” Olson said.

That, he says, is the real purpose of his trip: elevating the conversation about land, treaties, poverty and justice.

"I just want people to listen to Native people and learn more because I'm still learning. I don't have all the answers. I'm just a guy skiing, but I know that we have to listen, we have to learn,” he said.

He grew up oblivious to the fact that the land he grew up on was essentially taken from Ojibwe people in the mid 1800s. He now lives near Walker, in north-central Minnesota, but said his ancestors settled in the Red River Valley, and generations of his family have prospered on the rich farmland.

"Why did I not learn about the Treaty of Old Crossing growing up? Why did it take me until I was 32 years old to really understand what that meant for Native people?” he said.

The Treaty of Old Crossing transferred about 11 million acres of land in Minnesota and North Dakota from Ojibwe bands to the federal government — for about two cents an acre.

“We stole the land,” he said. “We continue to benefit from the genocide and colonization of Indigenous peoples. And they continue to suffer the consequences. I'm no savior, and I don't have all the answers. I'm still learning, and I just want other non-Natives to learn, too.”

Olson wants to be clear that he's not trying to speak for Indigenous people. He's trying to convince people to seek out the truth from Native people who know and live the history.

To listen to the audio version of this story and read related articles, follow this link to the MPR News website.  https://www.mprnews.org/story/2021/02/20/skiing-to-keep-other-people-warm-man-begins-trek-across-min...