Icicles descend from and visitors walk by one of the many ice caves of the Apostle Islands National Lakeshore on Feb. 4, 2014 near Cornucopia, Wis. Photo: Derek Montgomery for MPR News 2014

Despite the recent stretch of subzero conditions, ice coverage on Lake Superior is only about 50 percent as of this weekend. And lake ice at the caves, located northeast of Cornucopia, Wis., "is unstable, jagged, and rough, creating high risk conditions," the park reported on Thursday.

“The current ice shelf formed over the past two weeks from blown-in chunks of ice, subject to movement by winds and fracturing by Lake Superior waves," park superintendent Lynne Dominy said in a news release. "Under these conditions, changes in wind direction and waves can cause this ice shelf to blow in one day and be gone the next."

Park staff monitor ice conditions through the winter, to determine whether it might be safe to allow public access. 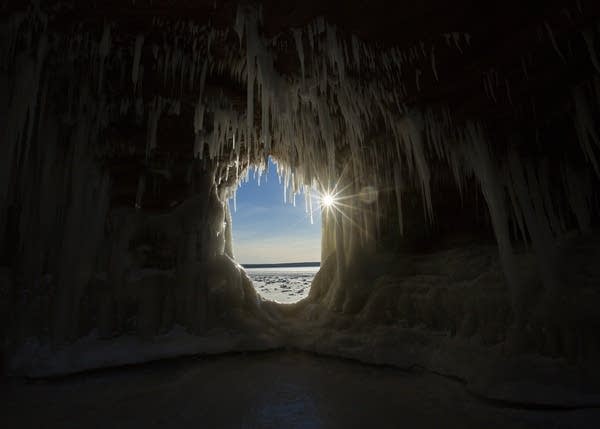 The sun peaks through an opening into an ice cave at the Apostle Islands National Lakeshore on Feb. 4, 2014 near Cornucopia, Wis. Photo: Derek Montgomery for MPR News 2014

"Lake Superior is warming rapidly, ice cover is decreasing, and the likelihood of access to the ice caves has become a rare event," Dominy said. “One of the most common phrases you hear around here is ‘the Lake is the Boss’ — which is true in the summer and in the winter.”

The "ice caves" are formed by water seeping through the sandstone cliffs and caves and freezing into ice formations. Spray from Lake Superior waves also adds to the display.

The ice caves were last open to public access in 2014 and 2015, drawing thousands of visitors who walked a mile or more on frozen Lake Superior to reach the spectacle.

Those potential crowds are also a concern this winter, amid the ongoing pandemic.

Park officials noted that Bayfield County, Wis., has issued orders limiting the size of any public gatherings — so even if ice conditions were favorable, opening public access to the caves would be in violation of those rules and a stress on local emergency services.

To see the original report, prior years photos of the ice caves,  and related stories follow this link to the MPR News website.  https://www.mprnews.org/story/2021/02/20/access-to-apostle-islands-ice-caves-will-remain-closed-this...