About 26 ice anglers were rescued Tuesday morning in Duluth when winds broke off a huge chunk of 6-inch-thick ice where they were fishing on Lake Superior.  Photo: Dan Kraker | MPR News

Twenty-six ice anglers were rescued Tuesday morning in Duluth when the Lake Superior ice they were fishing on suddenly broke free and blew away from shore.

The Duluth Fire Department responded to a call at 11:03 a.m. behind the city’s Beacon Pointe condominium complex, about two miles northeast of downtown along Interstate 35.

Fifteen minutes later, crews began shuttling the stranded ice anglers to shore on the department’s rescue boat, Marine 3. One angler walked along the ice toward Park Point after the ice they were on drifted, rather than wait for the boat rescue. That angler was rescued by a St. Louis County Sheriff’s Office air boat.

All the anglers were off the ice before noon. 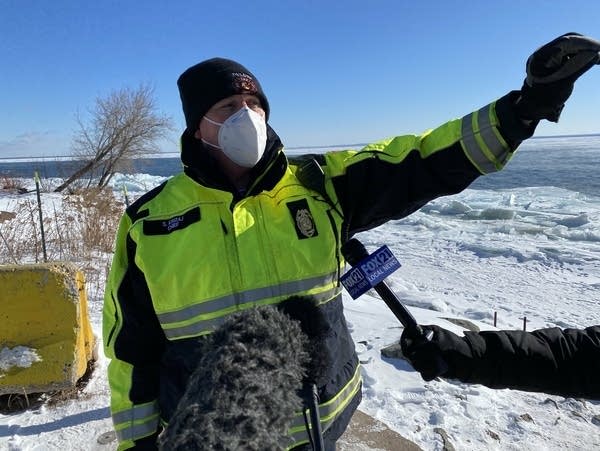 Duluth Fire Chief Shawn Krizaj speaks to media in front of Lake Superior where 26 anglers needed to be rescued after the ice they were fishing on broke loose and blew away from shore.
Photo: Dan Kraker | MPR News

As temperatures have plummeted in recent days, more anglers have been fishing on ice that’s 3 to 6 inches thick, not far from the Lake Superior shore — for lake trout, coho salmon and whitefish.

Fire Chief Shawn Krizaj said that every winter, he anticipates responding to a rescue like the one his crews encountered Tuesday because ice conditions on the lake can change rapidly when winds pick up and shift.

“They can really be sketchy at times, with the wind action we get,” he said. “One day, we can literally have 13 feet of stacked-up ice, the next day, 3 inches of clear smooth ice.”

This is the department’s biggest ice rescue in the last several years, he added.

Austin Balem of Duluth got out on the ice about 9 a.m., when “all of a sudden, the ice broke,” he said. “We looked out, and everybody was running. And then we started running towards shore and looked, and it was probably 100 yards out of open water.” 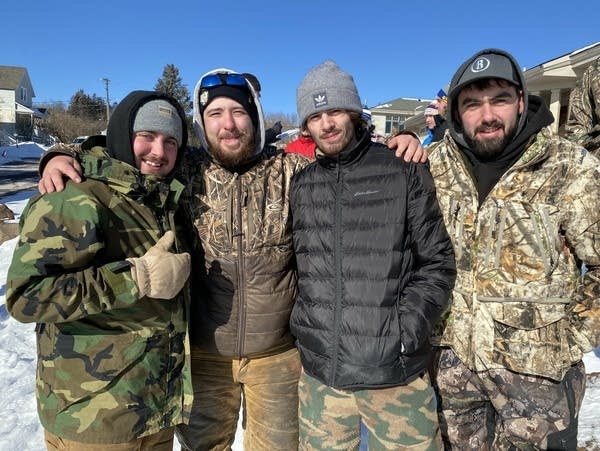 Austin Balem (left), Jeremiah Pack, Luke Eilefson and Nate Sich of Duluth were among 26 ice anglers rescued Tuesday morning in Duluth when winds broke off a huge chunk of 6-inch-thick ice where they were fishing on Lake Superior.  Photo: Dan Kraker | MPR News

Balem and his friends stopped running, and waited for the Fire Department to arrive. He said the conditions had changed incredibly quickly.

“We were out there, having a good time, catching fish, and it just switched up that quick,” he said. “You could definitely feel the wind switch on us really fast.”

Balem estimates the ice was about 6 inches thick Tuesday morning. He said he had fished earlier in the week on ice that was less than 3 inches thick. He and other anglers waited on shore, hoping that rescue teams might also be able to return the equipment they left on the ice. He said he had to leave hundreds of dollars’ worth of gear behind.

“I’d rather have my life than my gear, though,” he said.

To see the original report and read related stories, follow this link to the MPR News website.  https://www.mprnews.org/story/2021/02/09/ice-anglers-rescued-in-duluth-after-lake-superior-ice-break...