Are you 65 or older? What you need to know about getting your COVID-19 vaccine Cari Giroir, a licensed practical nurse, holds up a sticker after receiving her first dose of the COVID-19 vaccine at the Gardens of Episcopal Homes in St. Paul. Residents and employees in the long-term care facility began getting vaccinated at the end of December.  Photo: Christine T. Nguyen | MPR News 2020

State health leaders on Thursday said hospitals, health care systems and other providers can now administer COVID-19 vaccines to wider groups of Minnesotans, including those who are 65 and older.

The move is meant to allow any health care providers with extra vaccine doses to get them to people as quickly as possible. And it comes in response to recent announcements that the federal government is expanding its vaccine guidance to states.

If I’m 65 or older, does that mean I can get my shot right away?

The state Health Department says: Not yet.

There are still many details to sort out before the vaccine is widely available in Minnesota.

If I’m 65 or older, or have underlying health conditions, should I call my doctor today?

No. State health leaders are recommending that patients wait — just a bit — for a number of reasons.

Primary among them: While the federal government has begun to expand its recommendations for who can be vaccinated at this point in the process, it still needs to allocate many thousands more vaccine doses in short order before people in this expanded group can get shots.

The Minnesota Department of Health’s announcement is really intended to give providers who have extra vaccines some flexibility in using those doses quickly.

But the state is still in the process of following its original vaccine rollout plan — and is currently vaccinating people in the first group of that strategy: health care workers, dentists, people working as in-home nurses or mental health care clinics. 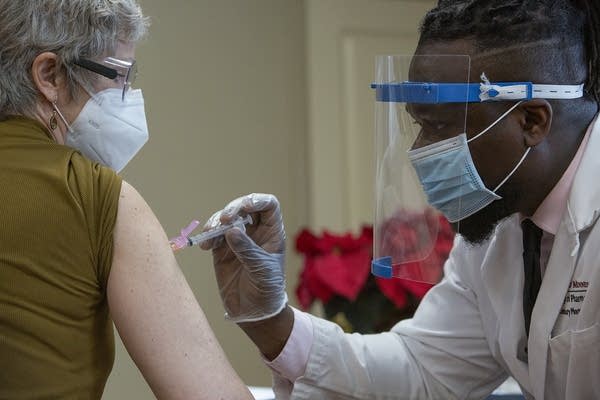 Why is the state changing direction now?

The idea is to jump-start a sluggish beginning to the county’s vaccine rollout.

First, they plan to release all available vaccines, instead of holding some back for second doses.

Next, they want to start vaccinating people who are 65 and older, as well as people with underlying health conditions, now.

This is an abrupt pivot on the part of the federal government, which is managing the country’s vaccine distribution by allocating the supply to states, and offering recommendations for how states distribute the shots to residents.

Until now, the federal government had been holding back a supply of vaccine to serve as second doses for those who have gotten their first dose.

Both vaccines — one manufactured by Pfizer and the other by Moderna — require two doses, several weeks apart. Reserving those doses was the government’s way of ensuring that there will be a second shot waiting for people who are getting vaccinated now.

At the same time, the Centers for Disease Control and Prevention was recommending that states wait to vaccinate people 65 and older later in the rollout.

But now, state and local health departments, which already had a distribution plan in place that aligned with earlier federal guidance, are having to scramble.

How long will this pivot take?

Commissioner Jan Malcolm said the Minnesota Department of Health is ready and willing to expand vaccinations quickly. But the key to making this new approach work, she said, is a larger vaccine allocation from the federal government.

So what does that mean for people who are next in line to get the vaccine?

This is a key, unanswered question.

Minnesota is working its way through the first group of vaccine recipients — classified as 1a in its rollout plan — which includes front-line health care workers most at risk of being exposed to COVID-19, as well as residents of long-term care facilities.

The next group — classified as 1b — was scheduled to start getting vaccinated in February. That group includes other front-line workers who can’t work from home, such as teachers, police, firefighters and essential workers.

With this new federal guidance, the state says it's working out the details of if and how this group’s vaccination plan will change.

Right now, it's not clear if people 65 and older, who were scheduled to get their shots later in the plan, will effectively jump ahead of group 1b in line — or whether the state will get enough doses to vaccinate them all simultaneously.

Malcolm said Thursday the state will have more details about the state’s pivot to the new plan in the coming days.

To see the original story and related reports, follow this link to the MPR News website.  https://www.mprnews.org/story/2021/01/15/are-you-65-or-older-what-you-need-to-know-about-getting-you...
Public Notices