Skiers and snowboarders make their way toward the main chalet at Spirit Mountain on Sunday in Duluth, Minn. City-owned Spirit Mountain is facing a winter season with financial difficulties deepened by the pandemic's effect on city finances and the cancellation of summer activities, also due to the pandemic.   Photo: Derek Montgomery for MPR News

Standing on top of Spirit Mountain, looking down the snowy slopes that drop 700 feet toward west Duluth, it's easy to see why the state Legislature chose to build a ski area here, almost a half century ago, in 1974.

"This is, I think, the most spectacular view in the city of Duluth,” said Ann Glumac, interim director of the city-owned recreation area. “You're looking out over the St. Louis River Estuary, and then the harbor, and then the lake beyond.”

As she talks, snow guns blow artificial snow on the ski runs. Frost covers the trees. Kids are taking lessons on the beginner hill. Season pass and lift ticket sales this year are slightly ahead of last year at this time, she said, despite — or maybe because of — the pandemic. 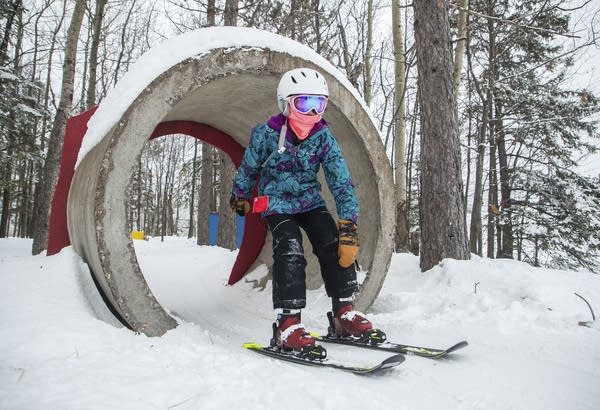 It's an idyllic winter scene — but a few months ago, it was unclear whether Spirit Mountain would even open for this winter’s season. And it wasn’t the first time. Duluth’s City Council has had to bail out the ski area twice in recent years, in order to keep it afloat. Now, a city task force has been formed, focused on the task of making the ski hill sustainable moving forward.

And the beleaguered ski hill faces a make-or-break winter.

In 2019, the Duluth City Council issued a $235,000 lifeline to Spirit Mountain, after a blizzard forced the cancellation of a snowmobile race the ski area was depending on.

The COVID-19 pandemic has put an added strain on the recreation area’s already precarious finances. Last March, the ski area cut its season short as the pandemic emerged in Minnesota. It remained closed through the summertime, when it typically turns into a wedding venue, mountain bike destination and recreation area. 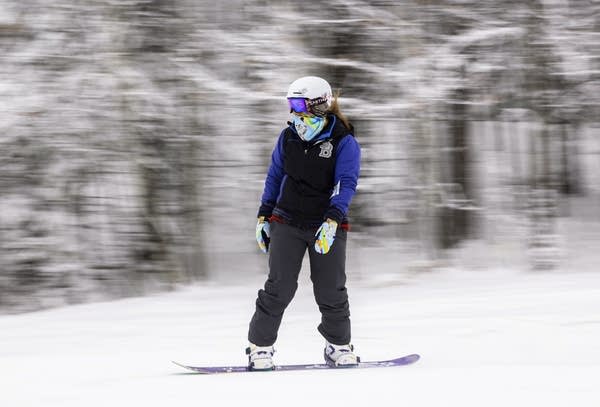 A snowboarder makes their way through terrain near the original Spirit Mountain chalet on Sunday. Photo: Derek Montgomery for MPR News

And with the loss of a summer season came the loss of the revenue that typically helps Spirit Mountain prepare for skiing in the winter.

"It's never ideal when there's an entity that needs a cash infusion to stay afloat,” Forsman said. “But there's been a couple of circumstances over the years, where it's not necessarily the fault of anyone [that] it's happened."

Still, even in typical years, Spirit Mountain doesn't generate enough money to cover its operating expenses — or ongoing payments on recent upgrades to the facility, including a new chalet that was built in 2013 at the bottom of the ski hill.

So, in addition to revenue from ski passes and venue rentals, Spirit Mountain relies on funds from Duluth's tourism tax, which is added on to the cost of hotel rooms, plus food and drink sold at bars and restaurants in the city — and is then distributed to help support city-run tourist attractions across Duluth.

Over the past decade, Spirit Mountain has received more than $10 million from tourism tax revenues — and it depends on that funding to operate. 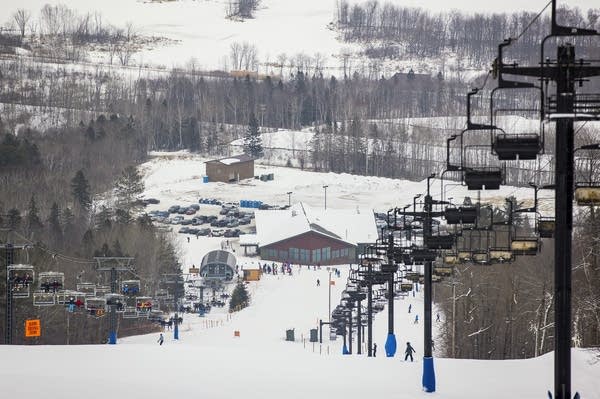 The Grand Avenue Chalet is visible from just below the main chalet at Spirit Mountain as skiers and snowboarders make their way up and down one of the destination's hills Sunday. Photo: Derek Montgomery for MPR News

Some Duluth residents, like Chris Adatte, say enough is enough — that it's past time for the city to get out of the ski business.

"To keep dumping [money] into Spirit Mountain and to see no change,” he said, “and you're just getting the same result — it's just always in peril. We need to just cut ties, or have someone else assume that risk, not our city."

In an effort to address the issue, the city of Duluth has created a community task force, tasked with developing recommendations for getting Spirit Mountain on more sustainable financial ground.

Among the options the group is exploring: Hiring a private firm to manage it; turning it into a nonprofit; or, even, selling it — although Forsman, who is a member of the task force, said legal restrictions imposed when the ski area was first created would make a sale extremely challenging. 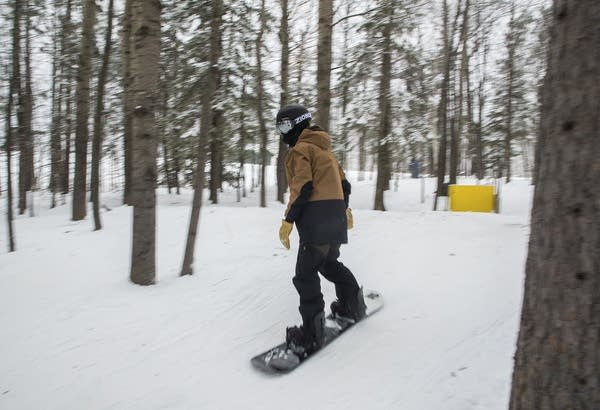 A snowboarder makes his way through terrain near the original Spirit Mountain chalet Sunday.
Photo: Derek Montgomery for MPR News

Spirit Mountain was created to provide winter recreation for locals and tourists, and to spur economic development. Forsman said it's a vital asset for a city that, over the past decade, has positioned itself as a center of outdoor recreation.

"It really is that seasonal cornerstone, both from a tourism standpoint to support our local businesses, but also just for the different organizations and user groups that revolve around our skiing sports here in the city," Forsman said

City officials say Spirit Mountain contributes to the region’s quality of life for residents, and is a significant economic driver, especially in the winter, after the tourism’s summer peak subsides.

“When visitors come to Duluth to experience Spirit Mountain … they're staying in our local hotels, and they are then contributing to the tax base through those expenditures as well as dining out in restaurants,” said Anna Tanski, president of Visit Duluth.

Tanski and others point out that the tourism tax that helps prop up Spirit Mountain was created, in part, to support the ski hill, along with the Duluth Entertainment Convention Center. Tourism tax revenue that’s collected — about $12 million the year before the pandemic — has to be funneled back into tourism attractions.

But, when more tourism tax dollars are diverted to Spirit Mountain, that means fewer dollars are available for other attractions.

And the number of skier visits has been dropping. Ten years ago, more than 150,000 skiers visited the attraction. In 2019, the last year for which data is available, that number was about 100,000 — a substantially higher figure than in the previous four years.

Janet Kennedy, another council member on the task force, is focused on making Spirit Mountain more of a community asset, even for nonskiers. 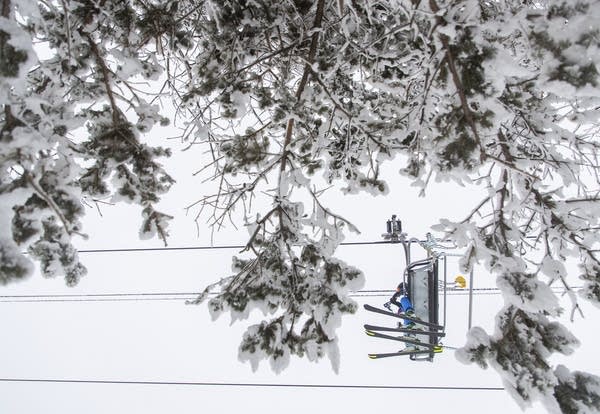 Skiers at Spirit Mountain make their way back up one of the ski resort's hills via a lift Sunday.
Photo: Derek Montgomery for MPR News

"At this point, Spirit Mountain isn't attainable for everyone because of the prices,” she said. “It needs to be a place — and it has, in some small increments, become a place — where you don't just ski. You know, skiing is not the only thing that can happen there."

Glumac agrees. She would like Spirit Mountain to be even more community-focused — to reconnect with its role as a family resort, serving families in Duluth.

“We don't need to be Vail, because we are in your backyard, or a two-hour drive away,” she said. “And you can come and have a really good time. You can bring your family and and enjoy some of the long, long winter days we have.”

But this winter at least, it's all about skiing at Spirit Mountain. This past weekend, Matt Allen drove an hour north from Mora to ski with his two young sons.

"Spirit's great! The lifts are fast and comfortable, and the runs are about twice as long as elsewhere toward the metro area,” he said. “I couldn't imagine Duluth without Spirit Mountain."

A lot of people in the city feel that way — and hope things stay that way. The city’s task force is set to release its recommendations in early February, laying out ways the city can continue to make happen. 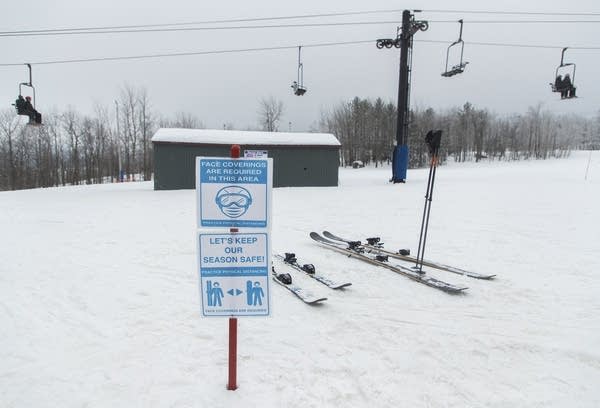 To hear an audio version of this story and see related reports, follow this link to the MPR News website.  https://www.mprnews.org/story/2021/01/13/duluths-cityrun-spirit-mountain-ski-area-at-financial-cross...
News