Latest on COVID-19 in MN: 'A promise to deliver isn’t delivering' Minnesota officials hope the federal government’s call for states to expand the priority pool of people getting COVID-19 vaccinations means more supplies are coming but they say the feds weren’t yet backing up those calls with more vaccine deliveries.

Trump administration officials Tuesday urged states to immediately expand eligibility to people 65 and older as well as people most vulnerable to the disease.

About 430,000 doses have been shipped to Minnesota so far to health providers and the federal program for long-term care facility vaccinations, according to the state’s new COVID-19 vaccination dashboard website; more than 150,000 Minnesotans have received at least one dose so far.

The changing federal recommendations could potentially add “a couple million people who will expect to be vaccinated” in Minnesota, she said. “If we’re only getting 60,000 doses a week, that is going to be a real problem.”

No additional doses have been shipped or arrived, she added.

“We are ready to receive more vaccine if the feds actually follow through on their promise,” Ehresmann said. Right now, “there are no additional doses for use. There are not doses to put into arms to go along with that.”

Later Tuesday, Gov. Tim Walz’s office said the U.S. Department of Health and Human Services had agreed to the requests of Minnesota and eight other states to release “millions of doses” that had been held back for distribution. The exact amount of supply that would go to Minnesota, though, wasn’t detailed.

The Health Department reported 1,335 newly confirmed or probable cases of the disease, along with 13 more deaths.

Nearly 700 people were in the hospital with COVID-19, with 135 needing intensive care. Those counts have dropped by more than half over the past four weeks. The seven-day trend of new hospital admissions is down to levels not seen since late October.

Even as they applaud the recent positive trends, health officials have been signaling that another upswing is expected. Tuesday’s data showed Minnesota’s count of active, confirmed cases ticking upward, though still far lower than last month. 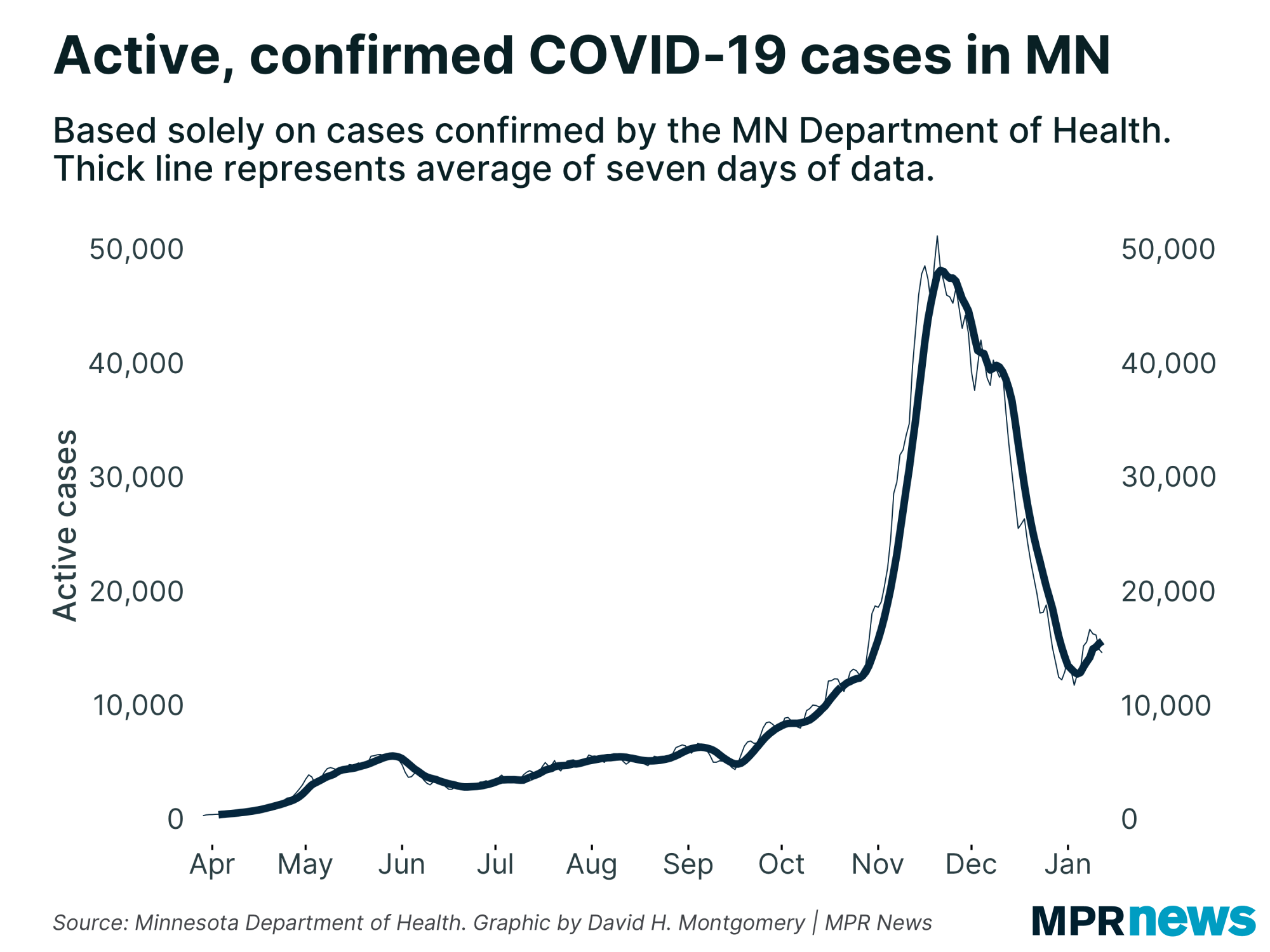 “We do expect to see cases go back up in Minnesota following the year-end holidays, and potentially just as a result of the winter wearing on and more indoor time and more gatherings,” Malcolm told reporters.

Overall, Minnesota’s COVID-19 path remains hard to chart because of the reporting from those year-end holidays.

The cases reported Tuesday put Minnesota at 438,867 in the pandemic. Of those, about 95 percent have recovered to the point they no longer need to be isolated. 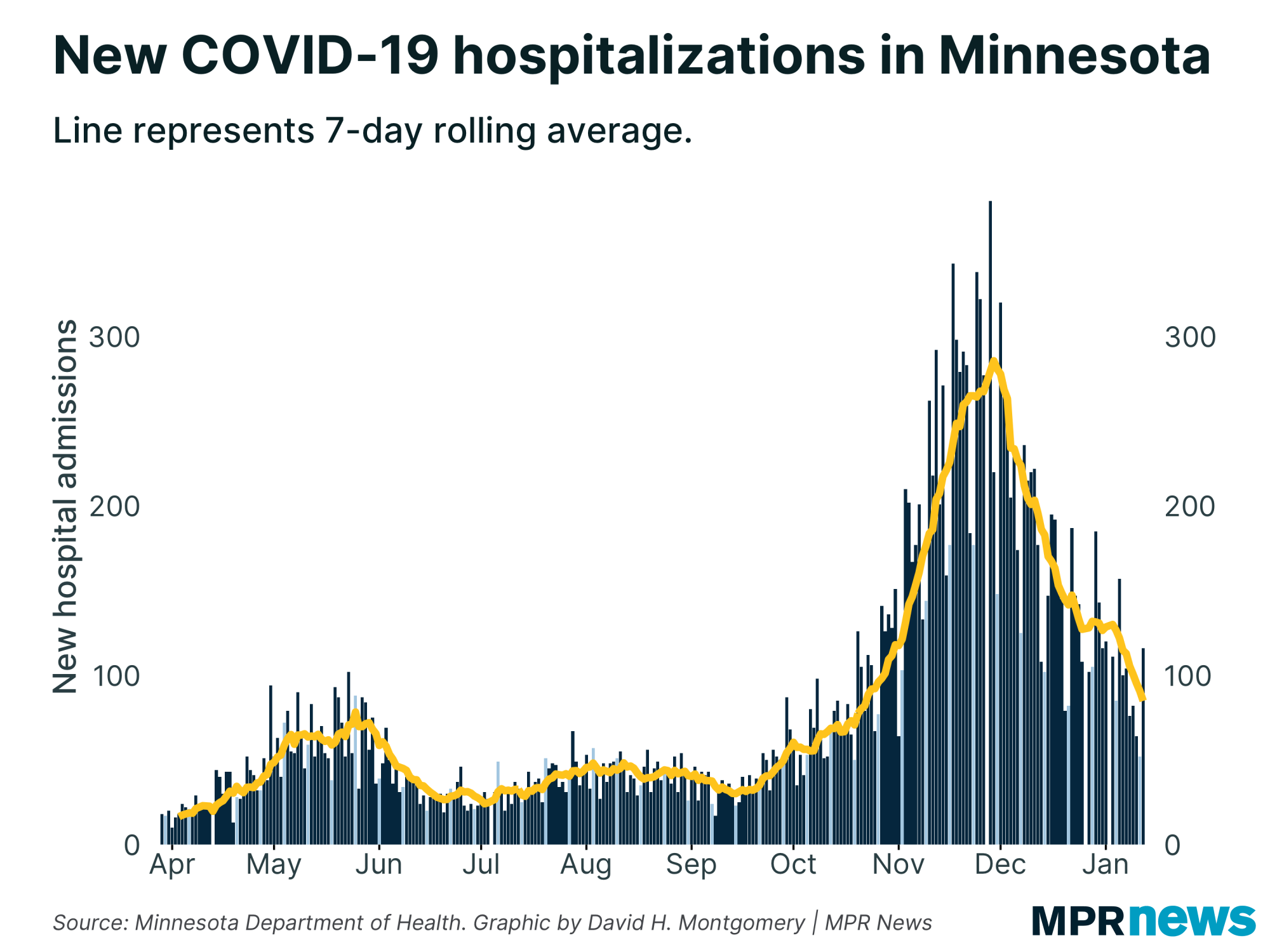 The newly reported deaths raised Minnesota’s toll to 5,724. Among those who’ve died, about 64 percent had been living in long-term care or assisted living facilities; most had underlying health problems. 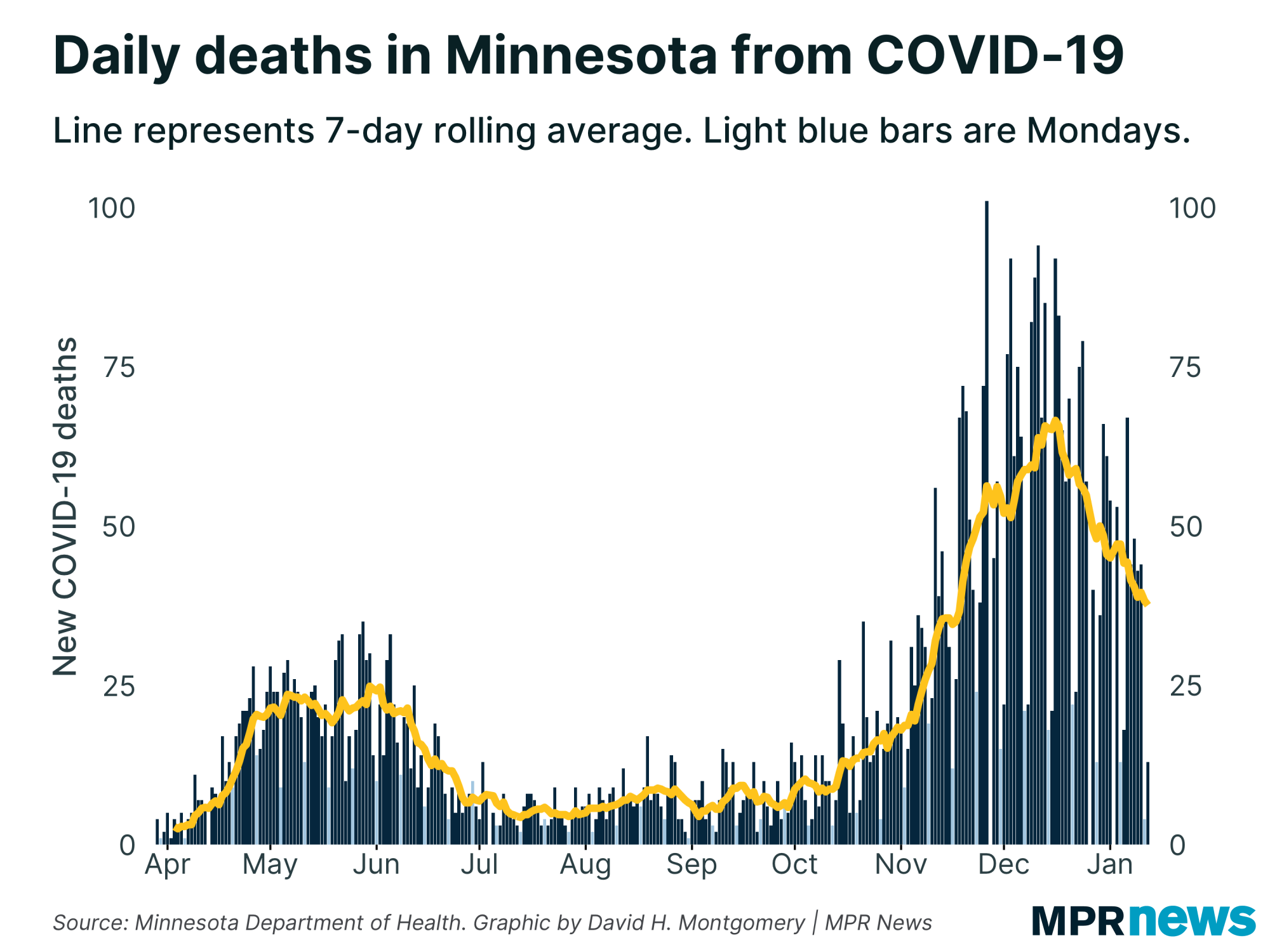 People in their 20s still make up the age bracket with the state’s largest number of confirmed cases — more than 83,500 since the pandemic began, including more than 44,000 among people ages 20 to 24. 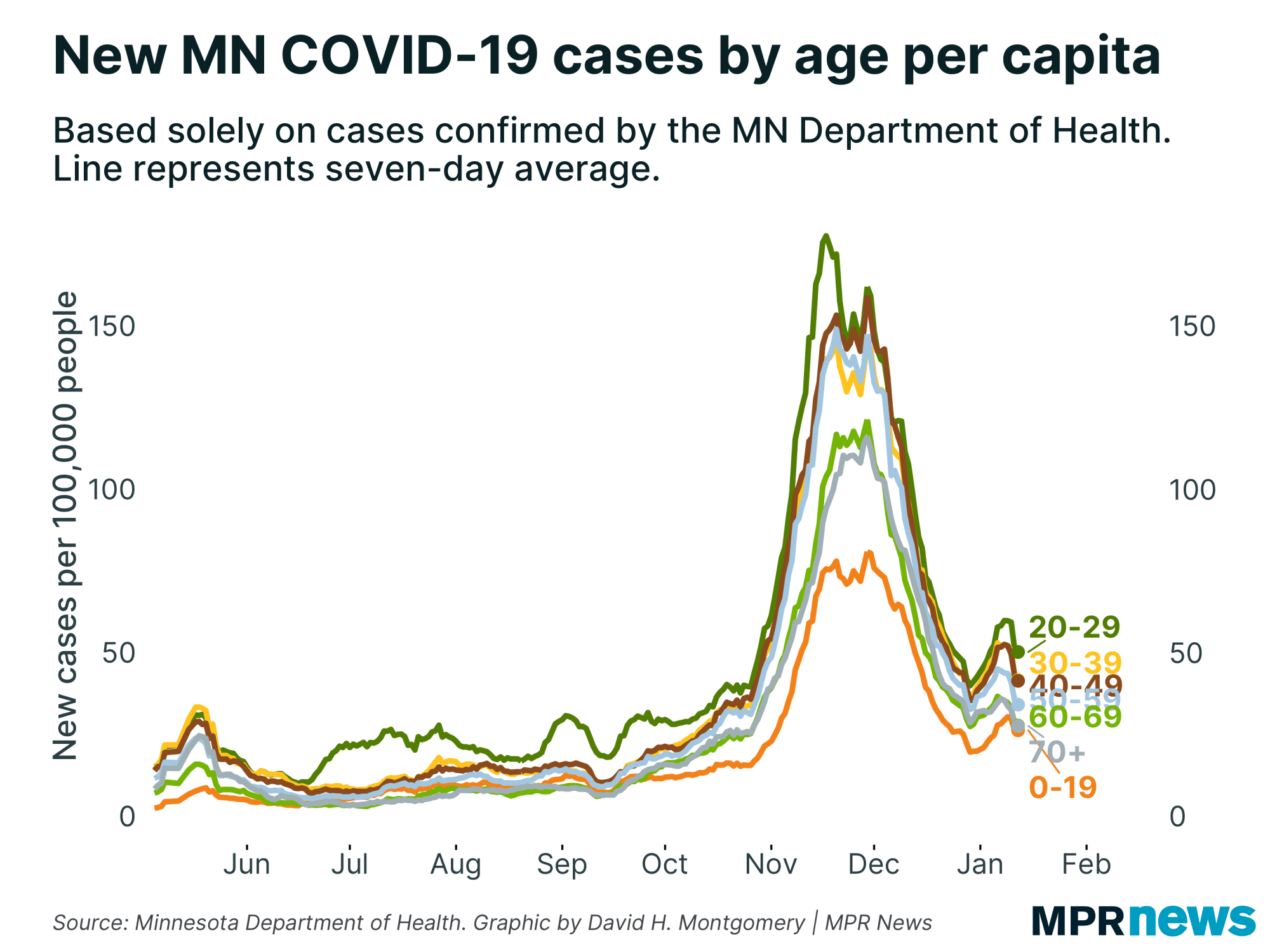 The number of high school-age youth confirmed with the disease has also grown, with more than 34,000 total cases among those ages 15 to 19 since the pandemic began.

Although less likely to feel the worst effects of the disease and end up hospitalized, experts worry youth and young adults will spread it to older relatives and members of other vulnerable populations.

It’s of particular concern because people can have the coronavirus and spread COVID-19 when they don’t have symptoms.

A relatively small bump in new cases is happening across the state. 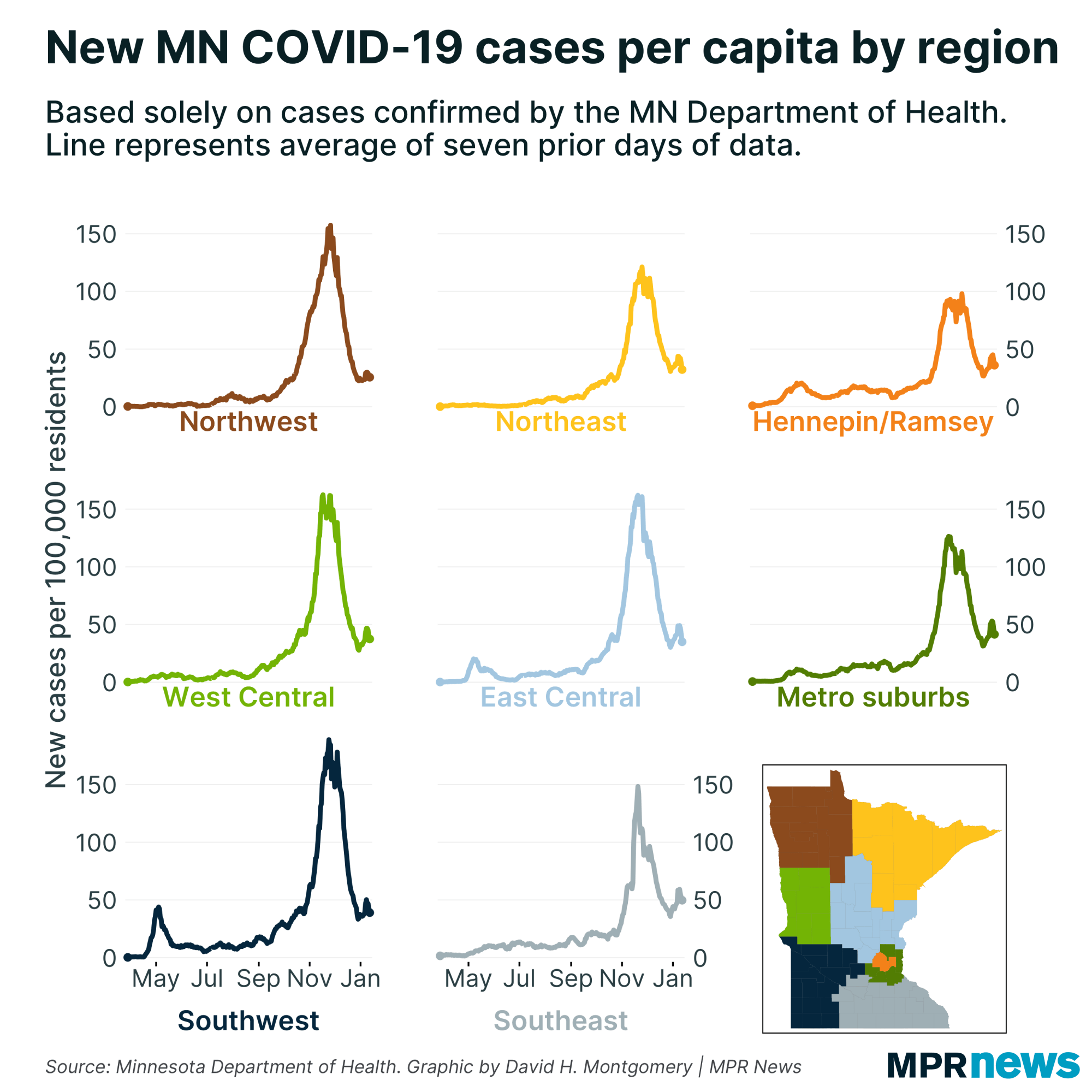 Hot spots continue to pop up in rural counties relative to their population. 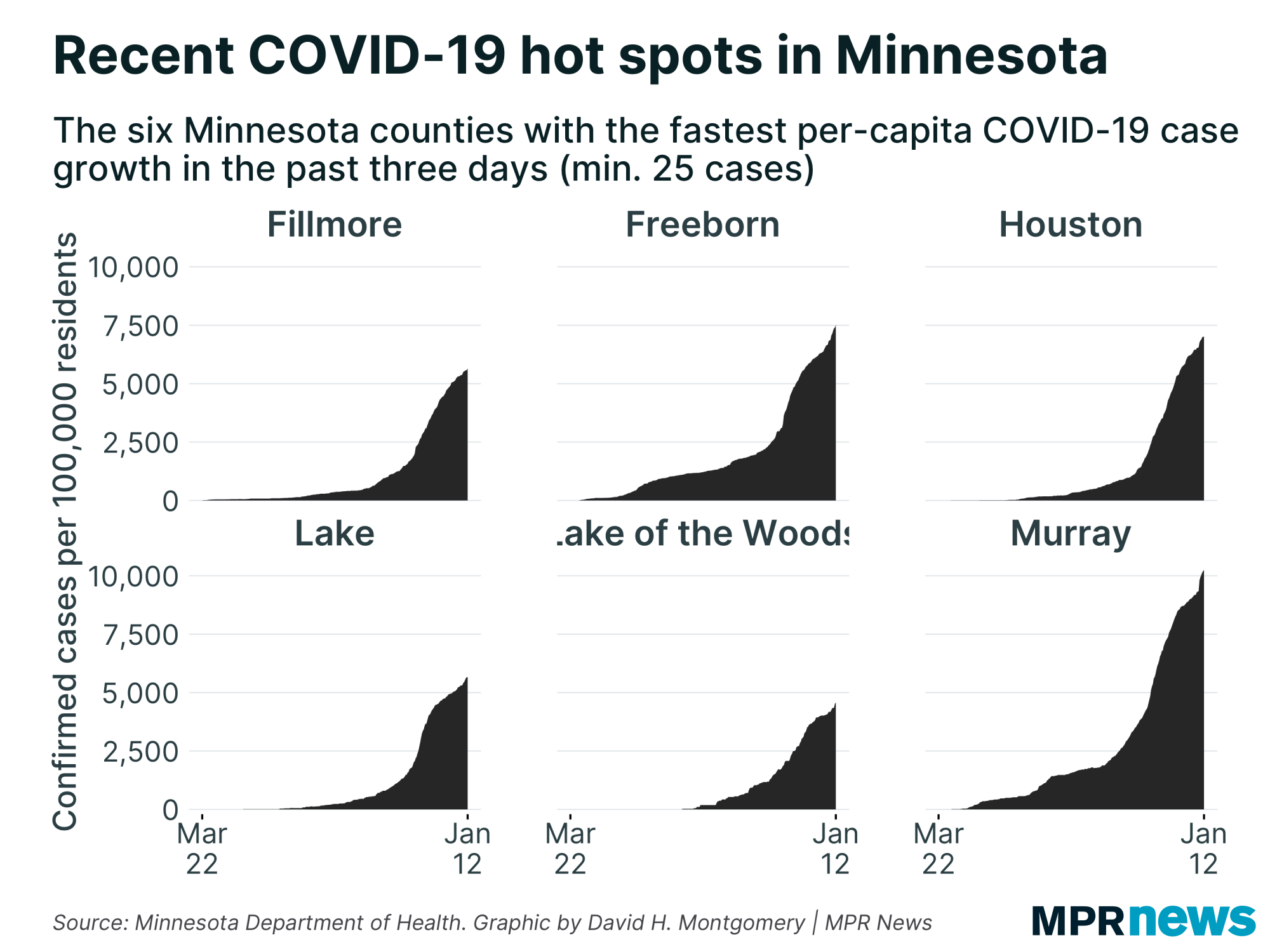 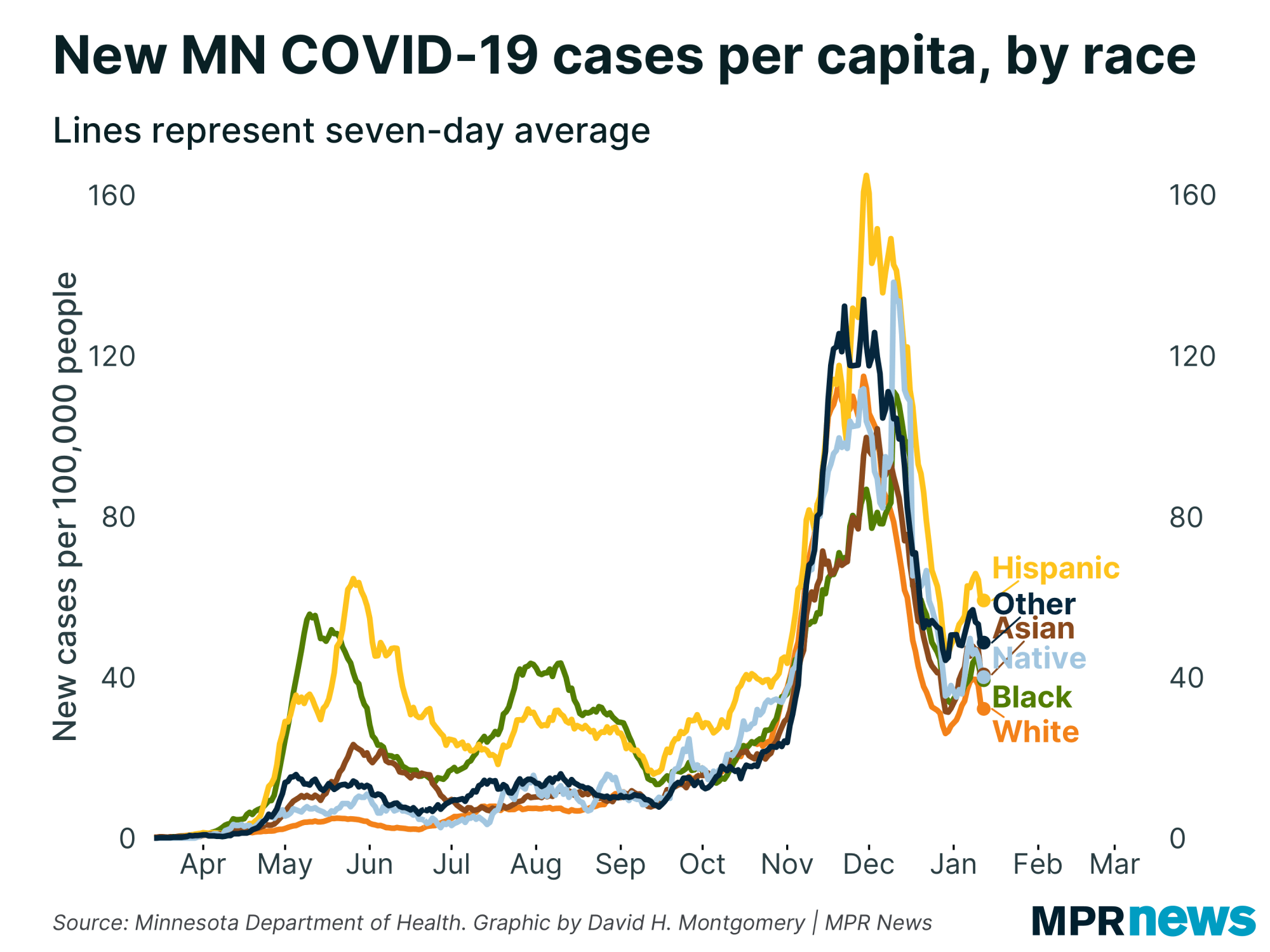 Even as new case counts ease from their late November, early December peaks, the data shows people of color continue to be hit hardest.

Distrust of the government, together with deeply rooted health and economic disparities, have hampered efforts to boost testing among communities of color, officials say, especially among unauthorized immigrants who fear their personal information may be used to deport them.Similar trends have been seen among Minnesota’s Indigenous residents. Counts among Indigenous people jumped in October relative to population.

Minnesota is making some changes to the phone alert system it uses to help track COVID-19.

The change applies to many users of Apple's iPhone. The state's information technology agency, MNIT, said this weekend that users with newer operating systems will get a prompt that allows them to turn on exposure notifications, without using the separate COVID-19 app. It's part of technology widely in use already, developed by Apple and Google, that can be incorporated into a phone's operating system.

The service has all the same features as the app, using Bluetooth technology and randomly assigned numbers to detect others in close proximity, and later share anonymously if either party reports a positive COVID-19 test. The new version, like the app itself, does not collect individual information or track locations.

To see the original story and read related reports, follow this link to the MPR News website.  https://www.mprnews.org/story/2021/01/13/latest-on-covid19-in-mn