Line 3 construction barrels ahead, despite efforts to block it In northern Minnesota’s Aitkin County, just north of the tiny town of Palisade, construction workers are clear-cutting a wide path through the forest near the Mississippi River, heavy equipment rumbling, to make way for the new Line 3 oil pipeline replacement project.

And Tania Aubid, a member of the Mille Lacs Band of Ojibwe, is there to try to stop them.

"They want to ship the tar sands, toxic oil. … And when that pipeline breaches, it's going to go into the waterways here," she said.

Aubid has come to this place every day for more than a week, part of a group of people who call themselves water protectors — there to speak out against the pipeline and, in some cases, put their bodies in the way of construction. 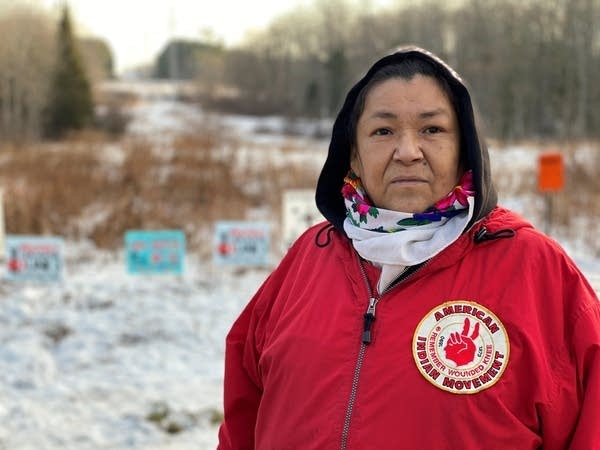 Tania Aubid of the Mille Lacs Band of Ojibwe is among the “water protectors” who have demonstrated at a construction site in Aitkin County where the Line 3 oil pipeline is slated to cross the Mississippi River.  Photo: Dan Kraker | MPR News

Also out there every day: Law enforcement, including Aitkin County Sheriff Dan Guida.

"You're angry at me because you're mad at them,” Guida told Aubid last week, as he gestured toward the pipeline workers.

“These guys are raping, murdering and killing Mother Earth,” Aubid shouted. “You're standing here and not doing anything about it!”

Construction has ramped up quickly on Line 3 since Enbridge Energy received its final state and federal permits late last month — and so have the protests of activists determined to stop work on the contentious project, at least until challenges can be heard in court. 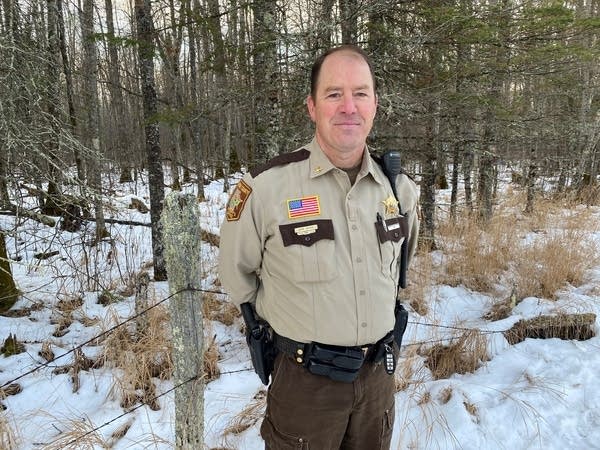 Guida says he respects the "energy" that both sides bring to this divisive project. Demonstrators have set up a gathering space alongside the Great River Road, just a few feet from the pipeline corridor.

Two people even camped high up in trees along the pipeline corridor for more than a week to try to block work on the project.

The scene remained fairly low-key until early Monday afternoon, when several people were arrested, including Liam Delmain, the last person remaining in the trees, who was removed with the aid of a bucket truck. 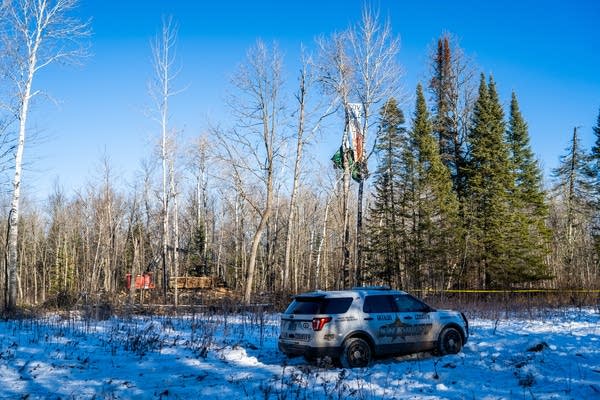 Guida said Delmain told him they were ready to come down. Temperatures had plummeted to 6 degrees below zero the night before.

Dawn Goodwin, a member of the White Earth Nation and a leader in the fight against Line 3, witnessed the arrests, but said they left her undeterred.

"It just gives me more energy and drive to continue on and do all that I can do to stop this horrible idea," she said.

Line 3 ‘means the world’ to many workers

In the meantime, construction crews have quickly ramped up work on Line 3, part of a network of six pipelines operated by Enbridge Energy that together carry nearly 3 million barrels of heavy oil every day through northern Minnesota.

But the current Line 3 is deteriorating, and requires extensive maintenance. To keep it operating safely, Enbridge has had to cut the amount of oil the pipeline can carry nearly in half.

So the Canadian company is replacing it with a new pipe that cuts a different path across the state — west and south of the Leech Lake Indian Reservation, and under the Mississippi River in Aitkin County. 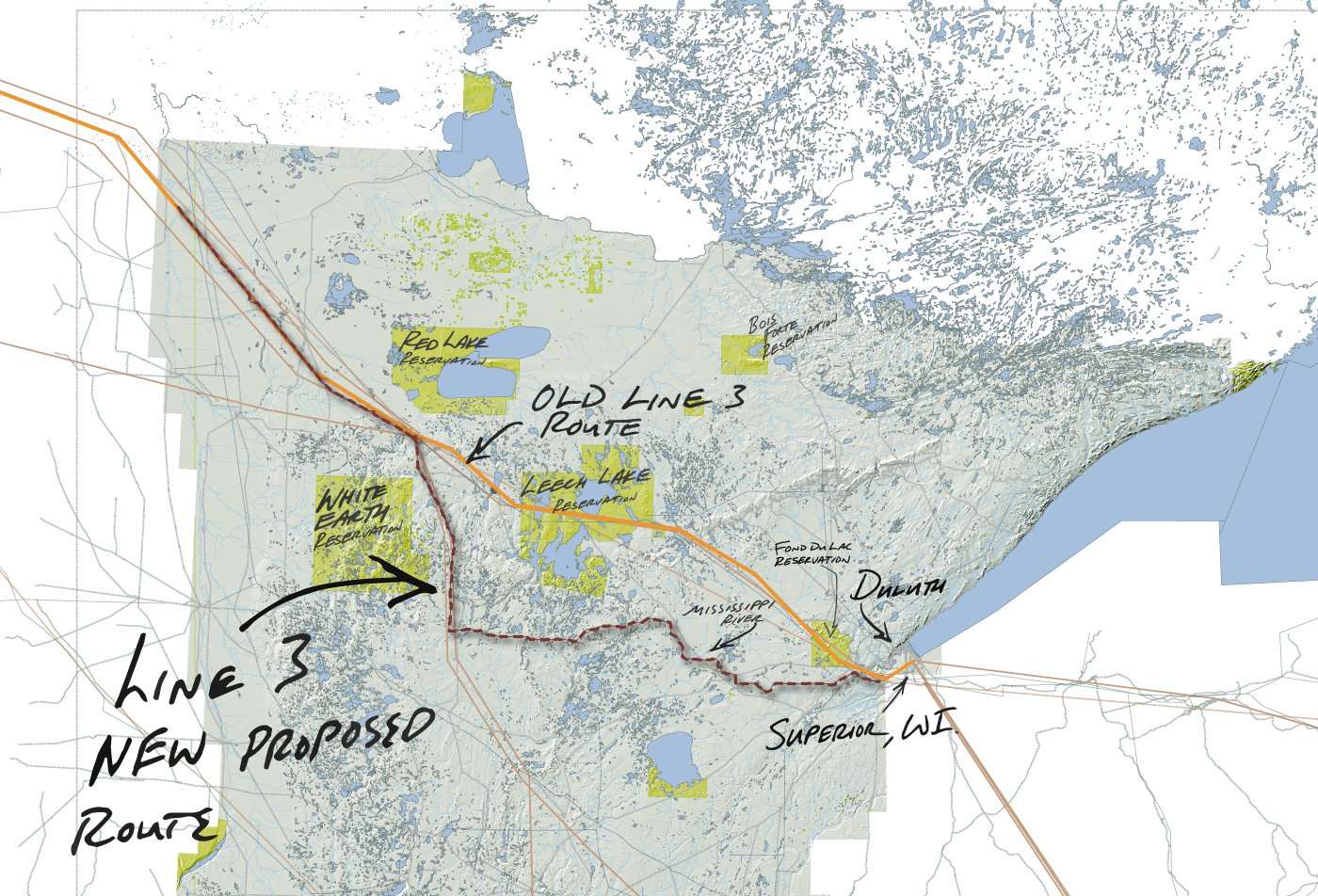 It's a nearly $3 billion project that's expected to take up to nine months to build.

"For the workers that are going to work on this project, it means the world to them,” said Jason George, with the Operating Engineers Union Local 49. By the end of December, he said, about 1,400 of the union’s members will be working on Line 3, including many “pipeliners” who live in northern Minnesota, who travel the country building and maintaining oil and gas pipelines. 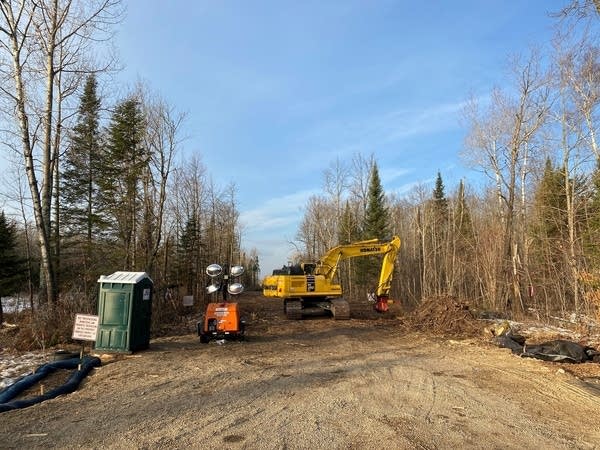 Enbridge’s contractors and union workers mobilized quickly after the company received its final permits late last month. Kevin Pranis, of the Laborers International Union North America, said that's partly because some of the work, like drilling deep under rivers, needs to be done in the winter.

"There's also interest in, frankly, getting folks to work, which we need a lot right now. So it's ramped up very quickly, I think we'll be in full swing by the end of this month. And we'll have a lot accomplished before we get to the spring thaw."

Pranis said he expects more than 4,000 workers in all will be working on the project by the new year, more than half of whom will be hired by Minnesota unions. 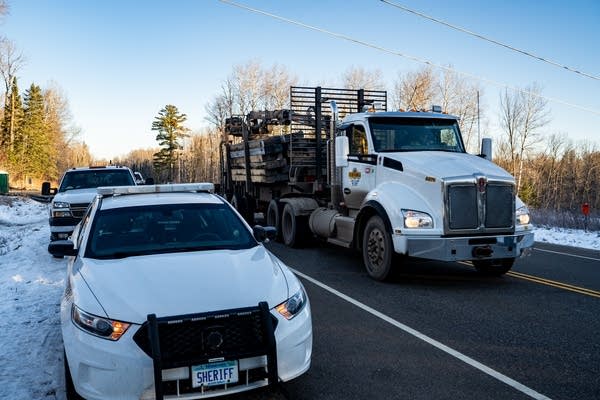 Trucks carrying wood planks to be used as a drill pad arrive to a construction site for the Line 3 oil pipeline under the Mississippi River near Palisade on Dec. 9. Photo: Evan Frost | MPR News

“All of our people that work in our construction industry are going to be working,” said Dylan Goudge, mayor of Clearbrook, Minn., which is home to a major Enbridge pipeline terminal. “And they're going to be spending money locally. We've been looking forward to this for five years.”

‘Fight for our water’

As construction of Line 3 ramps up, so do efforts at trying to stop the pipeline from being built.

Several environmental and tribal groups, along with the Red Lake and White Earth Nations and the Minnesota Department of Commerce, have filed suit to try to block it. Groups are expected to soon ask the state appeals court to put a pause on construction until those suits can be heard. 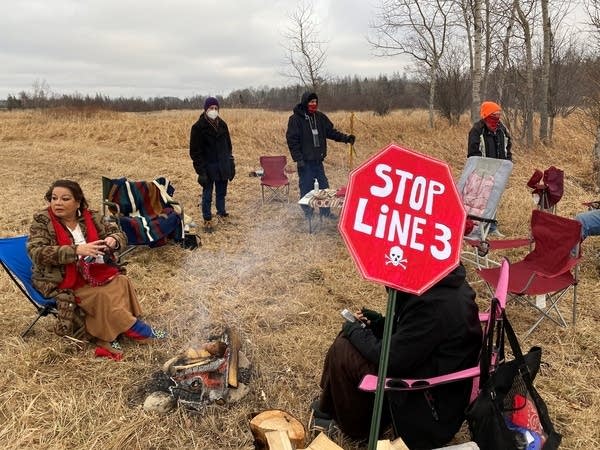 In the meantime, activists are continuing efforts on the ground to try to delay progress on the pipeline. They're locking themselves to equipment and standing in the way of construction.

But they’re also making quieter stands of opposition. Last week, Dawn Goodwin and a small group of about 20 activists gathered on the side of Highway 2, outside Bagley, Minn., where the Line 3 replacement is set to cross the Clearwater River.

They put up flags and banners along the highway. They built a small fire, prayed and sang.

"We're here to say it's not OK anymore,” Goodwin said. “We're not just going to cower and step back and not do anything to protect our lands. We're gonna do all that we can without violence." 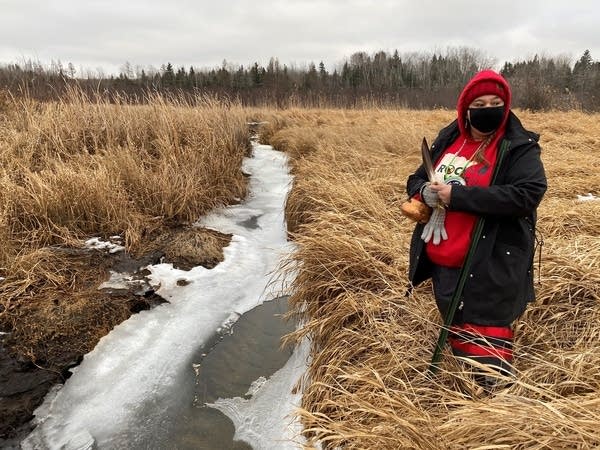 Dawn Goodwin of the White Earth Nation prepares to scoop up water from a small stream to use during a prayer at a protest along the Line 3 oil pipeline corridor outside Bagley, where it’s slated to cross the Clearwater River. Photo: Dan Kraker | MPR News

Line 3’s new route bypasses Ojibwe reservations in northern Minnesota, except for the Fond du Lac Reservation. The band reached an agreement with Enbridge to remove the old pipeline from its land and replace it with the new line.

But the new corridor passes through treaty land that Ojibwe tribes ceded to the federal government in the late 1800s — land which still maintains important historic and cultural significance.

Deb Topping, a member of the Fond du Lac Band, joined Goodwin alongside the highway. For more than six years, she said, she’s followed the Line 3 regulatory process. She’s spoken out against the project before the Minnesota Public Utilities Commission, the Minnesota Pollution Control Agency, the state Department of Natural Resources.

And despite the pipeline repeatedly winning approval from state and federal regulators, Topping said, she’ll continue to fight it.

“I'm not a quitter. Every single day I … say my prayers to the Creator. And I thank him that I get to fight this day, another day I get to fight for our water,” she said. “Until the day I die, I will fight for this water.” 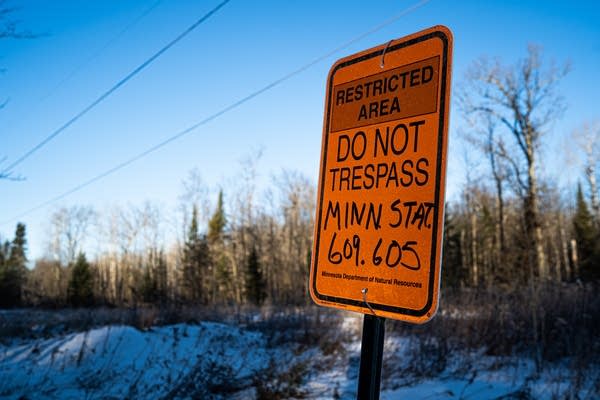 
To see the original article and hear an audio version of this report, follow this link to the MPR News website.  https://www.mprnews.org/story/2020/12/15/line-3-construction-barrels-ahead-despite-efforts-to-block-...
News