Dramatic soprano Heather Hjelle was living in Chicago, pursuing a career as a singer and voice teacher when the coronavirus came crashing in early this year.

Live performance gigs disappeared, along with the waitressing job that helped support her passion. And as the virus spread, Hjelle's compromised immune system made living in a bustling, big city an untenable choice.

So she decided to focus on teaching, and after six years in Chicago, came home to live with her grandmother on a western Minnesota farm.

"We're very, very close. She's the reason I kind of fell in love with music. She'd always be playing hymns on the piano,” recalled Hjelle. “And I would sing along, ever since I was a little girl. We'd go to the nursing home and perform for the residents."

Before the pandemic, Hjelle offered virtual voice lessons, so she could travel for performance work and continue teaching. Since then, they’ve become a lifeline, allowing her to move back home and refocus on teaching without having to start from scratch.

"I guess the biggest challenge when I first moved home was the internet, or lack thereof,” she said with a rueful laugh. “But we bumped it up and fixed that problem."

Hjelle is giving lessons to several students, including some still in Chicago, from the farm where she spent much of her childhood, near Barrett, in west-central Minnesota.

When she left Chicago in April, she was excited to return home — and to live with her grandmother.

"I was actually born in Alexandria, and my grandparents had farmed around here,” she said. “I was raised by a single mother. So I spent a lot of time actually here on the farm in Barrett."

But she grieved the loss of live performance, and she felt some anxiety about the move home. It felt a bit like failure, she said, going from a busy life in Chicago to tiny Grant County.

But the past few months, she said, have been a delightful surprise.

"I've actually found it rejuvenating to be in the middle of nowhere,” Hjelle said. “I feel more creative. And I feel that sometimes the city dampens that, the constant rush, having Starbucks in one hand and a doughnut in the other, and my phone under my arm and going a million miles an hour to work three jobs to do the thing.”

And now, she’s focused on teaching — which has helped her connect even more deeply to the work she loves.

“I'm now teaching, I get to teach what I love,” she said. “So I'm talking about what I love, which has improved how I do what I love." 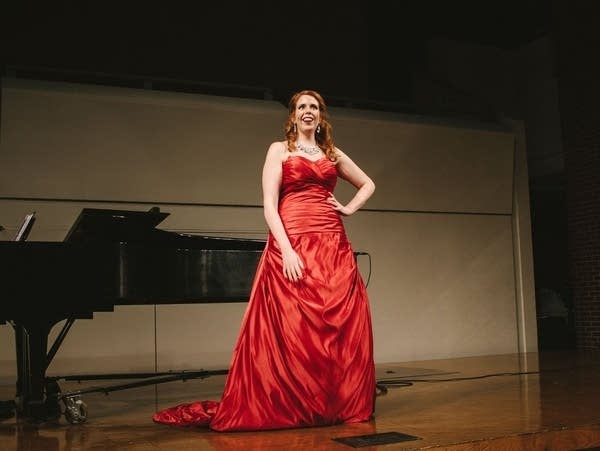 And in between the classes, she’s worked out a routine of helping her grandmother around the house, and embracing the solitude of the western Minnesota countryside.

"You know, going on a walk for miles and not seeing a soul beside a cow is, kind of refreshing, more refreshing than I thought,” said Hjelle.

And sometimes she has to be quiet while her grandmother attends Zoom meetings, so, she jokes, “I have to go out and sing to the cows.”

Since her return, she said, her small community has embraced and supported her — although she's often frustrated by the many friendly but maskless faces she sees at the grocery store or church.

And seven months after her move back to rural Minnesota, she's still maintaining close friendships in the city through social media and virtual visits.

But she has no idea when live performance will return, and she expects rural Minnesota will be home for quite a while longer, at least until COVID-19 is no longer a threat.

"I think a lot of artists are actually thriving in a different kind of way now,” she said. “All of the  performing arts are being forced to think differently and to create differently, and I think we're going to see a new era of performing arts after COVID is over."

To read the original story and see related stories, follow this link to the MPR News website.  https://www.mprnews.org/story/2020/11/20/covid19-brings-opera-singer-home-to-the-farm