In a wonky conversation with reporters Wednesday about the latest COVID-19 data, the state's infectious disease director reached for an analogy that anyone could understand to describe the current state of the pandemic.

She described the current situation as an “escalating roller coaster,” adding, “I would not say that we have reached any sort of peak at this point.”

That’s pretty much the state of play now in Minnesota. 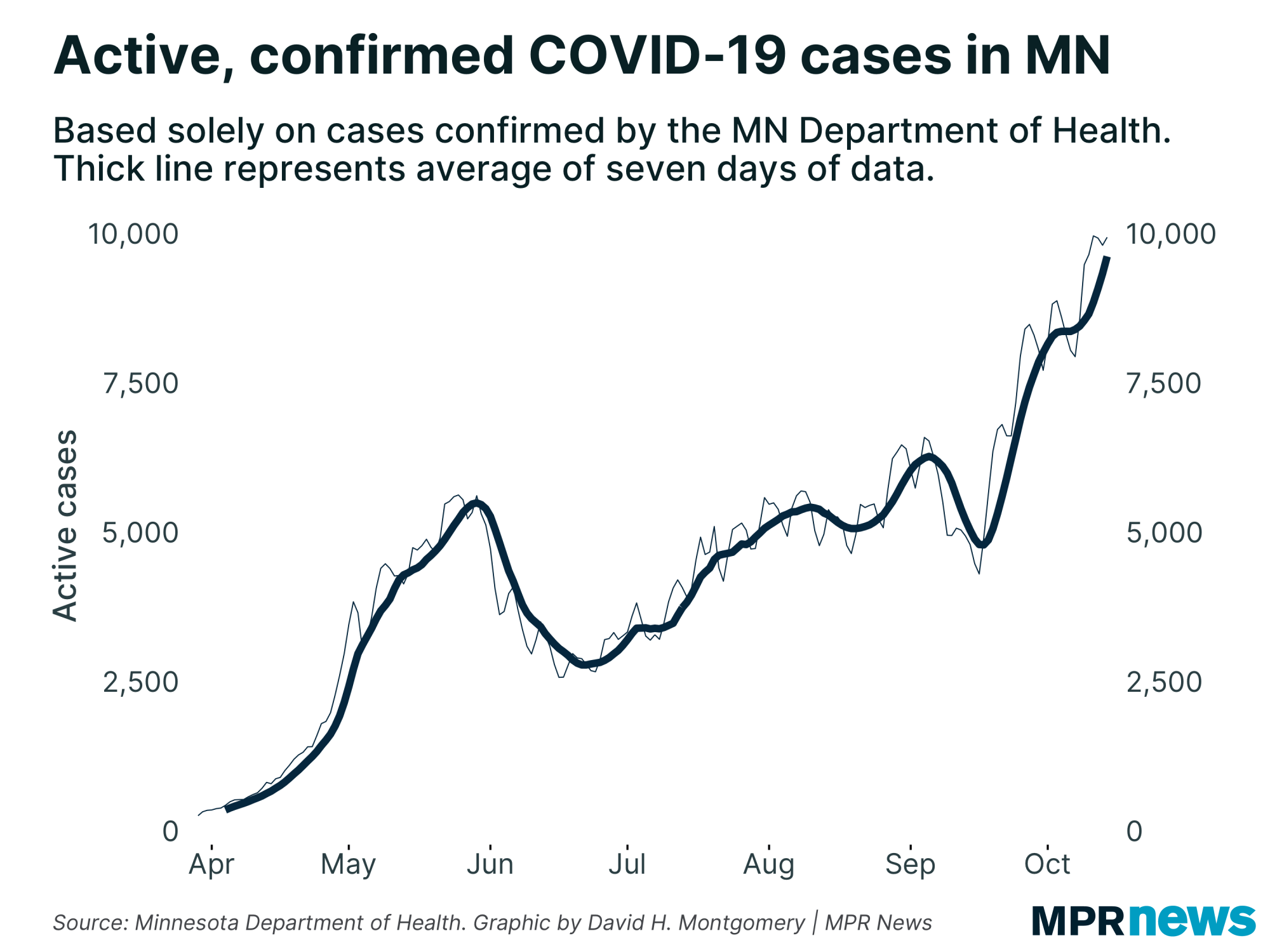 Officials had anticipated seeing an October surge in cases expected from Labor Day weekend gatherings, sporting events and college student meetups at the start of fall semester. They also expected the wave would put more people in the hospital. That appears to be happening. 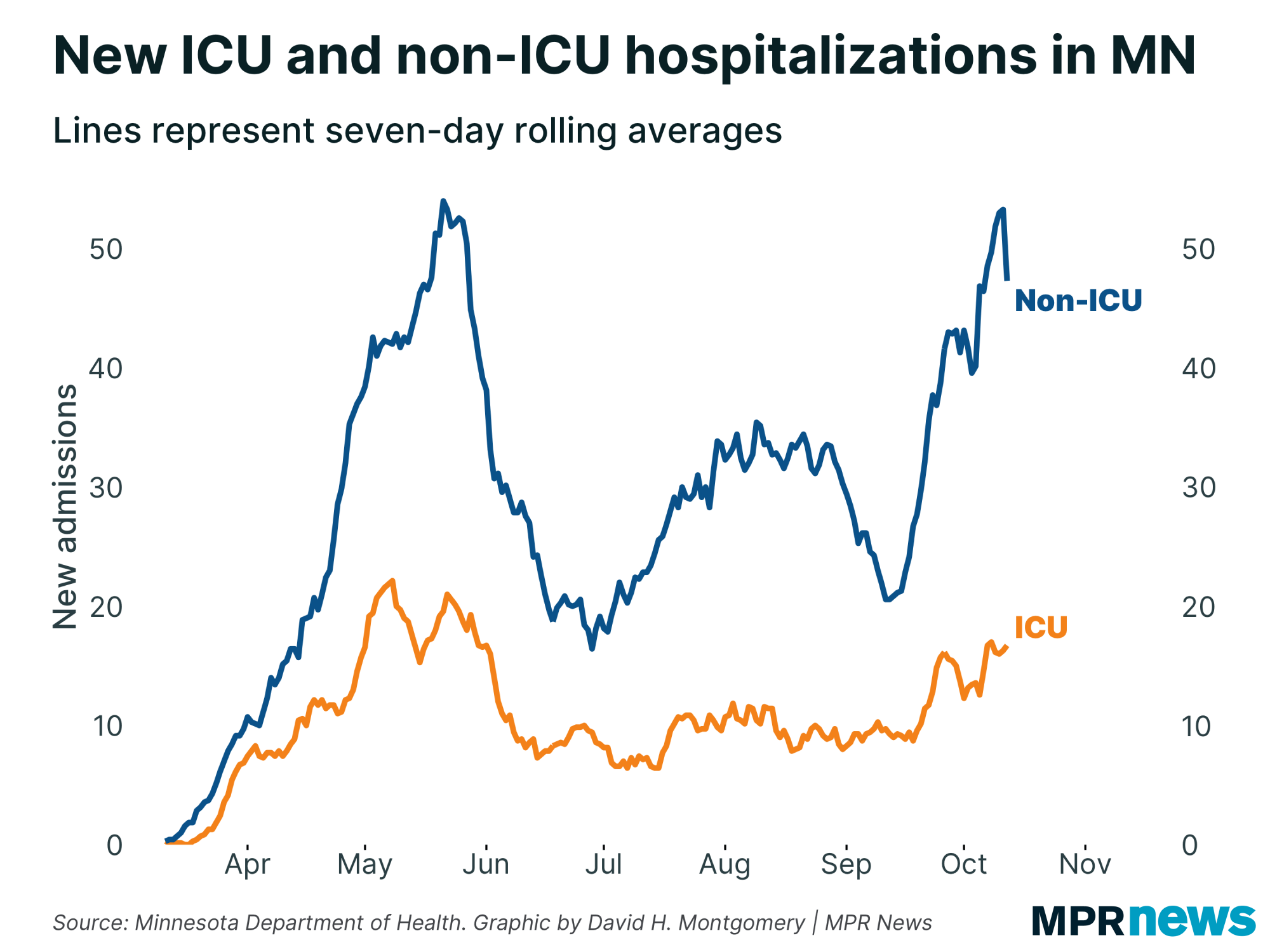 While the spike early in the pandemic was driven largely by illnesses tied to long-term care facilities and workplace sites such as meatpacking plants, officials say the current spread is diffused, making it even harder to trace and isolate cases.

Collectively, Minnesota will soon be able to process 60,000 tests per day, officials said, about twice what it’s managed on its best days to date.

“The biggest thing we can do to ensure our kids have an opportunity to be in school, that our businesses and restaurants remain open, is to simply follow the science around masking, around social distancing, getting tested,” Gov. Tim Walz told reporters Tuesday. “To not do these things will guarantee that others get it.”

New cases are up dramatically over the past month in all age groups. That includes a concerning rise in the number of new cases among Minnesotans ages 60 and older. It’s not clear what’s behind those increases.

People in their 20s still make up the age bracket with the state’s largest number of confirmed cases — more than 26,000 since the pandemic began, including more than 15,000 among people ages 20-24. 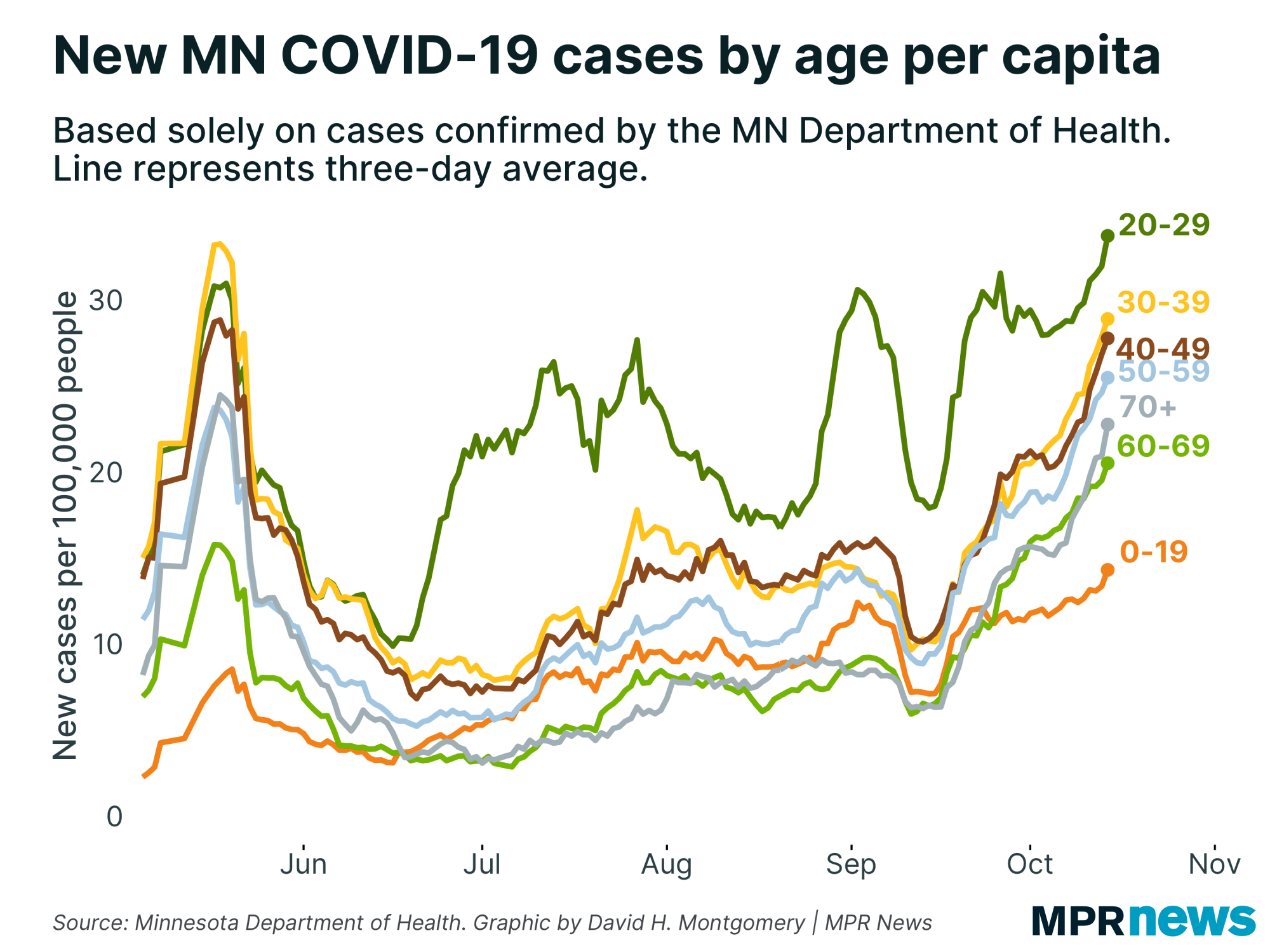 While less likely to feel the worst effects of the disease and end up hospitalized, experts worry youth and young adults will spread it to grandparents and other vulnerable populations and that spread could hamper attempts to reopen campuses completely to in-person teaching.

The number of high school-age children confirmed with the disease has also grown, with more than 10,800 total cases among children ages 15 to 19 since the pandemic began.

Regionally, central, northern and southern Minnesota have driven much of the recent increase in new cases while Hennepin and Ramsey counties show some of the slowest case growth in the state. 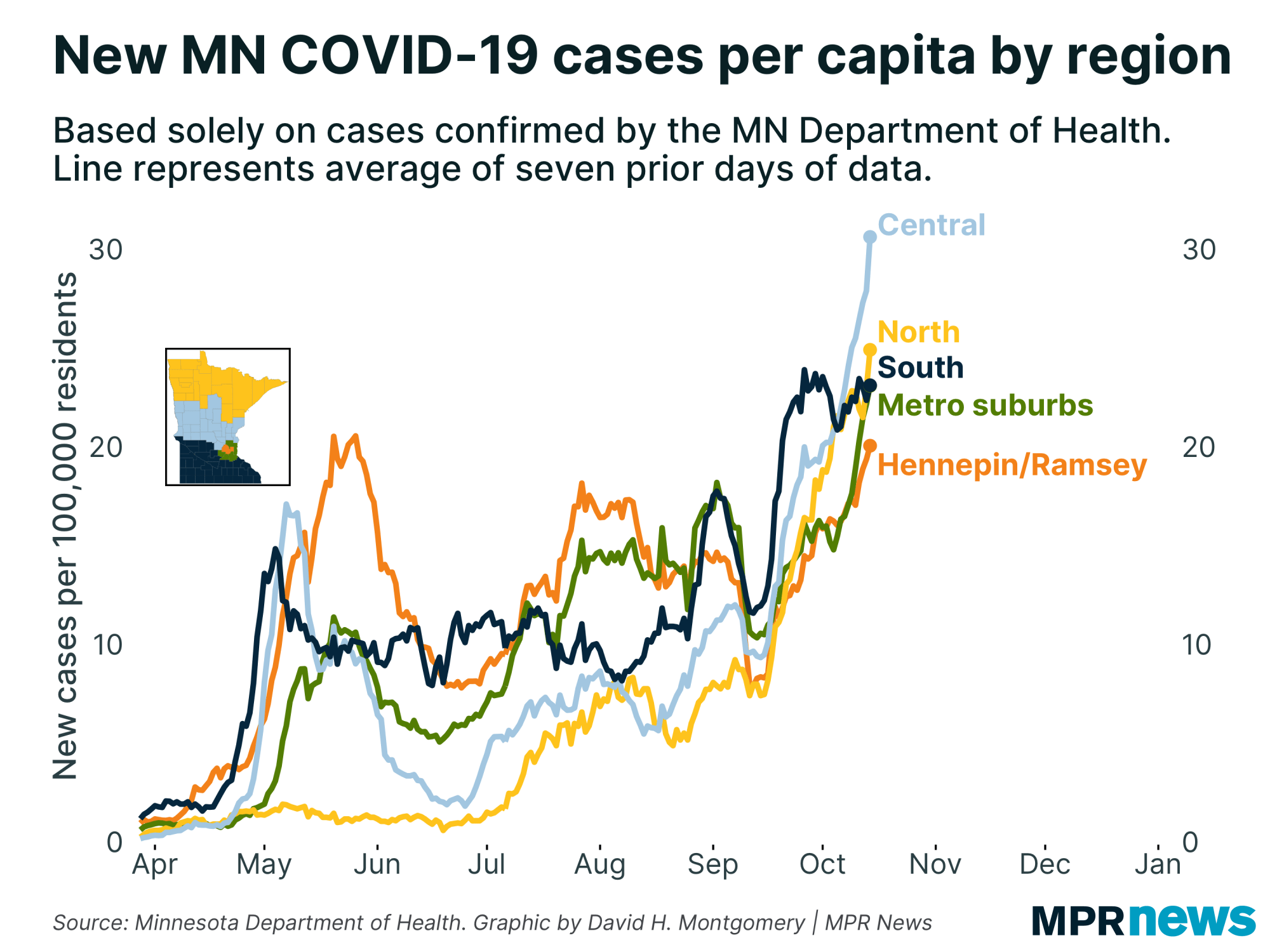 Central Minnesota cases are skyrocketing relative to its population. It’s not clear why. Northern Minnesota, once by far the region least affected by the disease, has also seen its caseload grow dramatically in recent weeks.

Collectively, rural areas of Minnesota continue to report the most new COVID-19 cases. 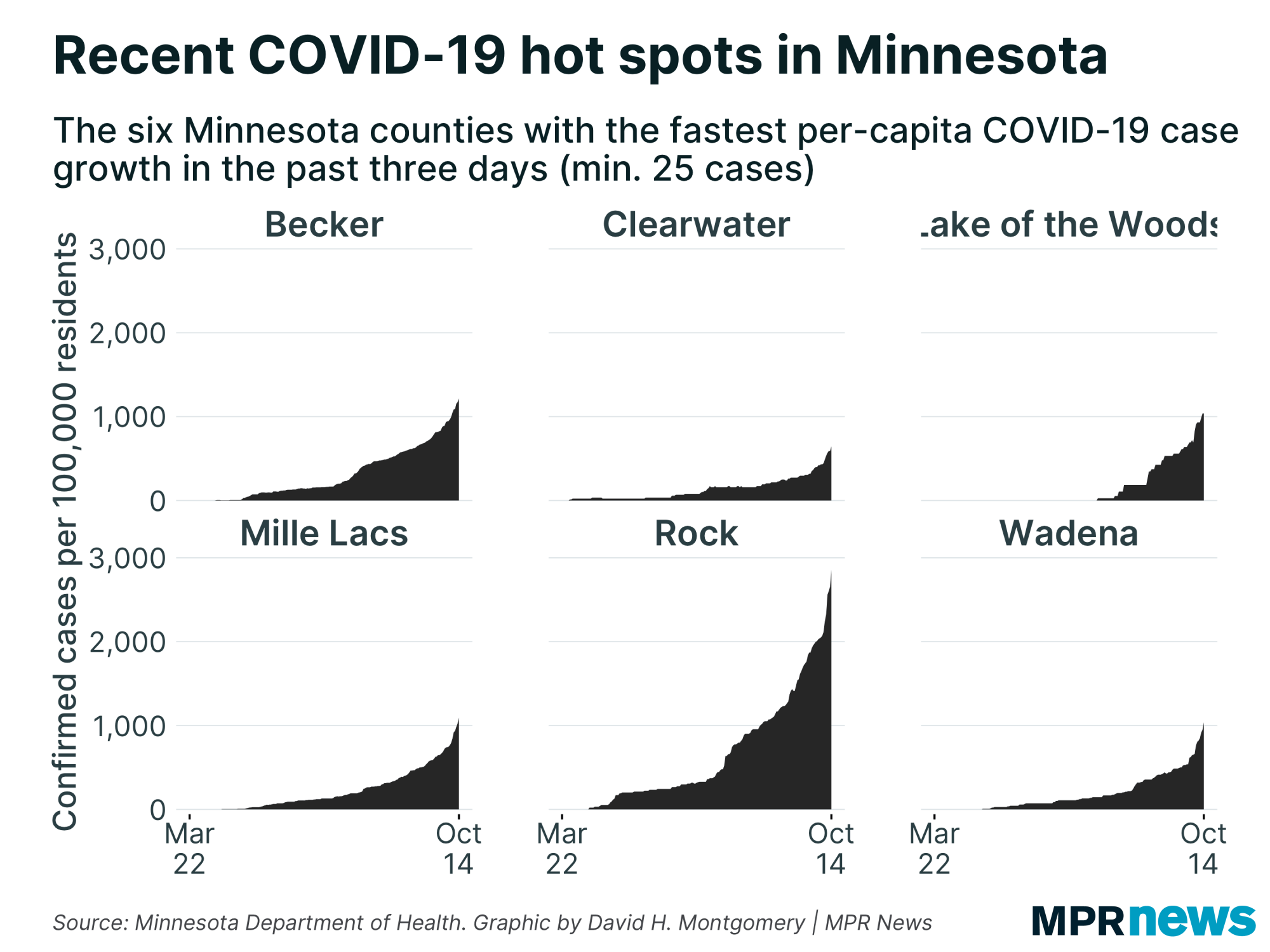 Early on, many Minnesotans thought COVID-19 would be only a Twin Cities metro area problem, but now the biggest problems are happening outside the suburban and urban parts of the state.

“The hottest of our hot spots are outside the metro area,” Ehresmann said Friday. That includes Martin and Pipestone counties in southern Minnesota, where positive test rates are hitting 10 percent, about twice the statewide average.

Ehresmann implored Minnesotans again to wear masks in indoor public gathering spaces, socially distance and stay home if they don’t feel well. “People in greater Minnesota,” she added, “they have it within their control to make things better.”

Minnesota health officials on Monday put out new guidance to ease visiting rules for nursing homes and other long-term care facilities in the state.

Visitors must now be allowed if the long-term care facility has not had a COVID-19 exposure in the last 14 days. Another requirement for opening nursing homes is if there's low to medium virus transmission in the county. 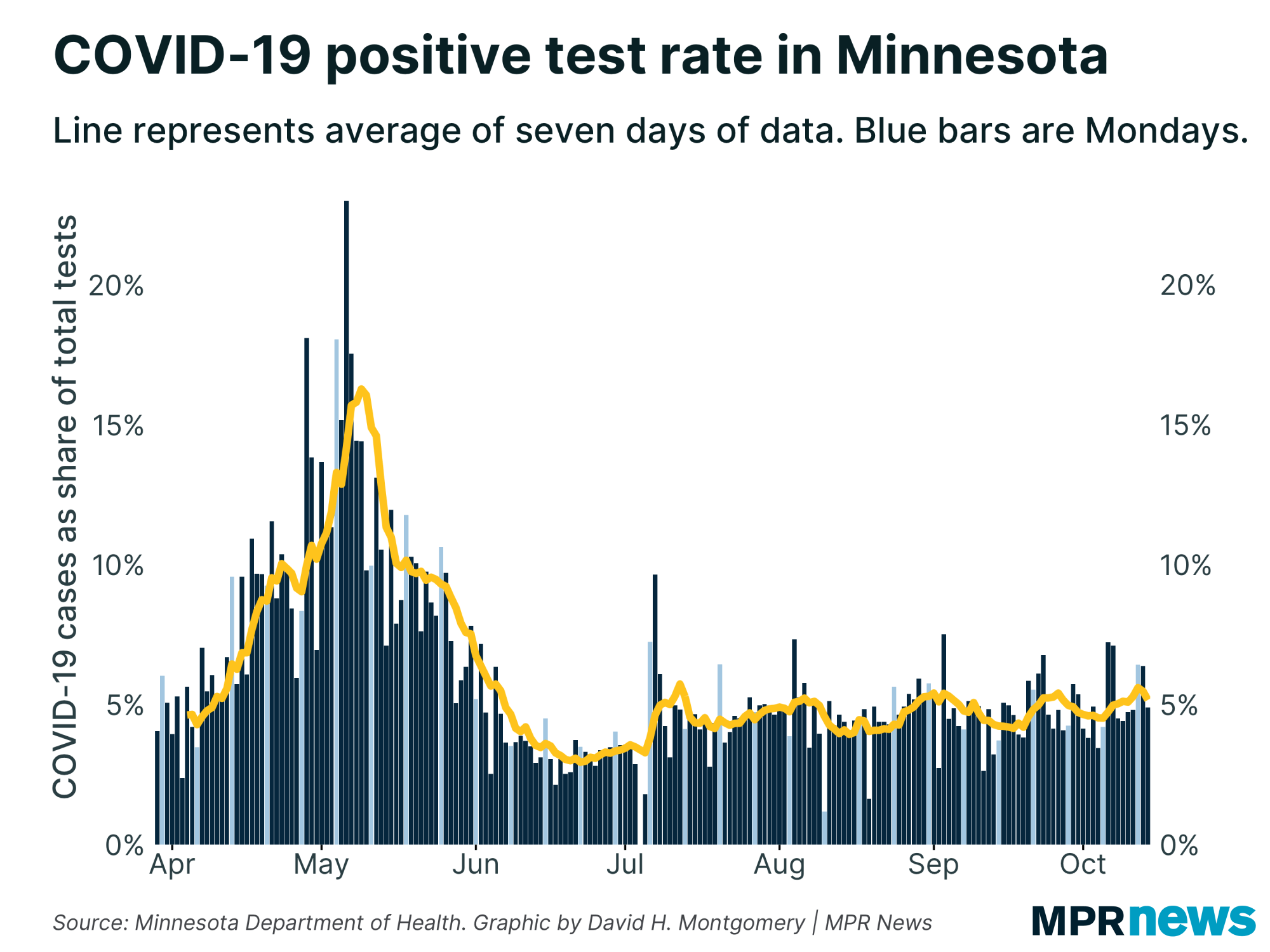 There are exceptions if there is a reasonable or clinical safety cause not to open, such as staffing issues.

The new rules go into effect Saturday. They are being introduced to align with new federal recommendations. Visitors still must schedule their time with the facilities, be screened for symptoms and wear masks.

Long-term care settings have long been a deep concern for the state’s public health authorities. Among the 2,180 who’ve died from COVID-19 related complications in Minnesota, about 71 percent had been living in long-term care or assisted living facilities; nearly all had underlying health problems.

Officials had placed severe visiting restrictions early on in the pandemic, hoping to stem the spread of the disease. They’ve also acknowledged the psychological toll that takes on residents and their families.

In Minnesota and across the country, COVID-19 has hit communities of color disproportionately hard in both cases and deaths.

Minnesotans of Hispanic descent are testing positive for COVID-19 at about five times the rate of white Minnesotans. They, along with Black Minnesotans, are also being hospitalized and moved to intensive care units at higher rates than the overall population. 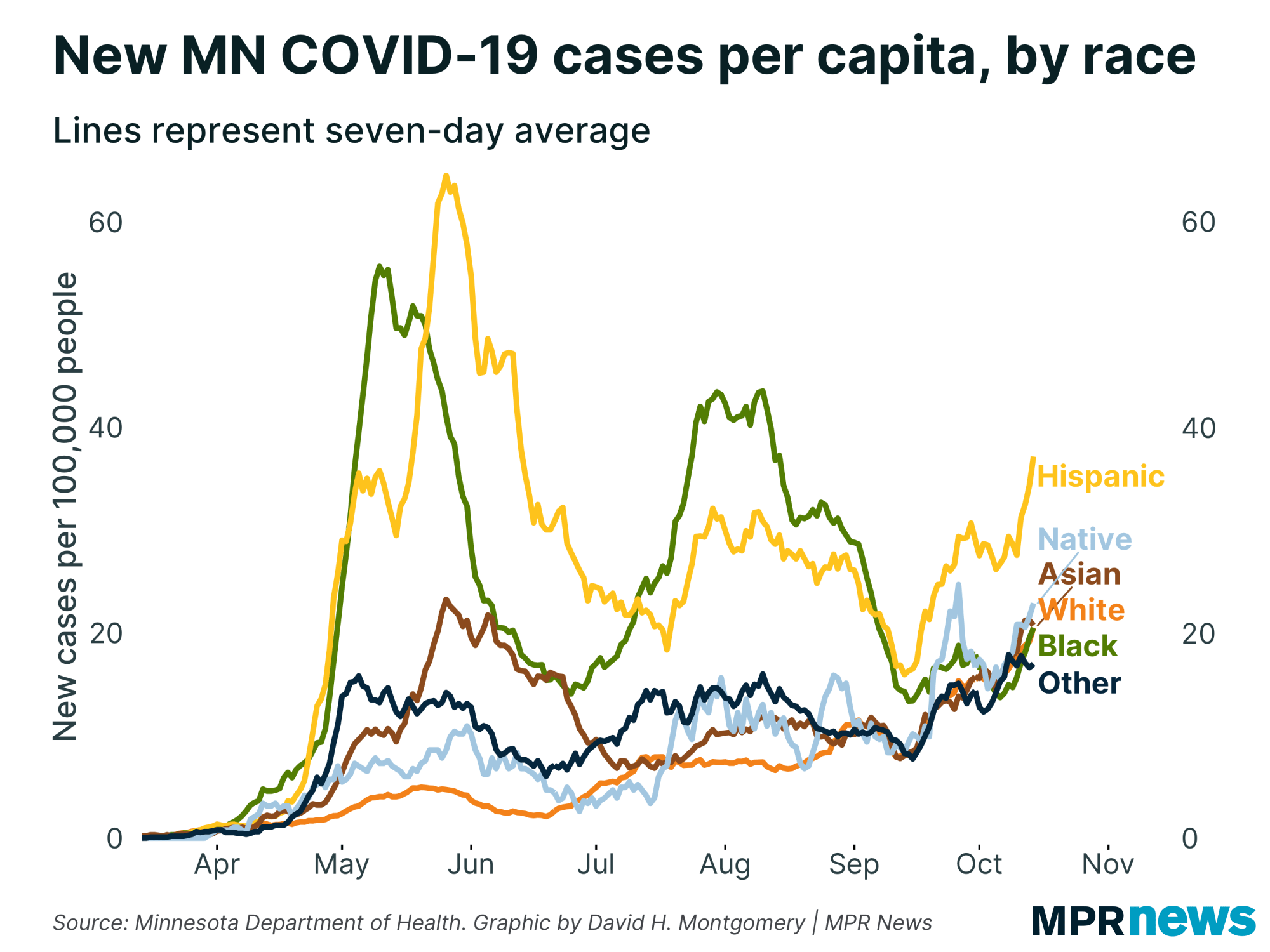 Distrust of the government, together with deeply rooted health and economic disparities, have hampered efforts to boost testing among communities of color, particularly for undocumented immigrants who fear their personal information may be used to deport them.

The Health Department on Wednesday also unveiled new changes to the way it reports data on cases and deaths. Health authorities have begun reporting the results of antigen tests, a more rapid form of COVID-19 test, along with the results from the more traditional COVID-19 test known by its initials PCR. 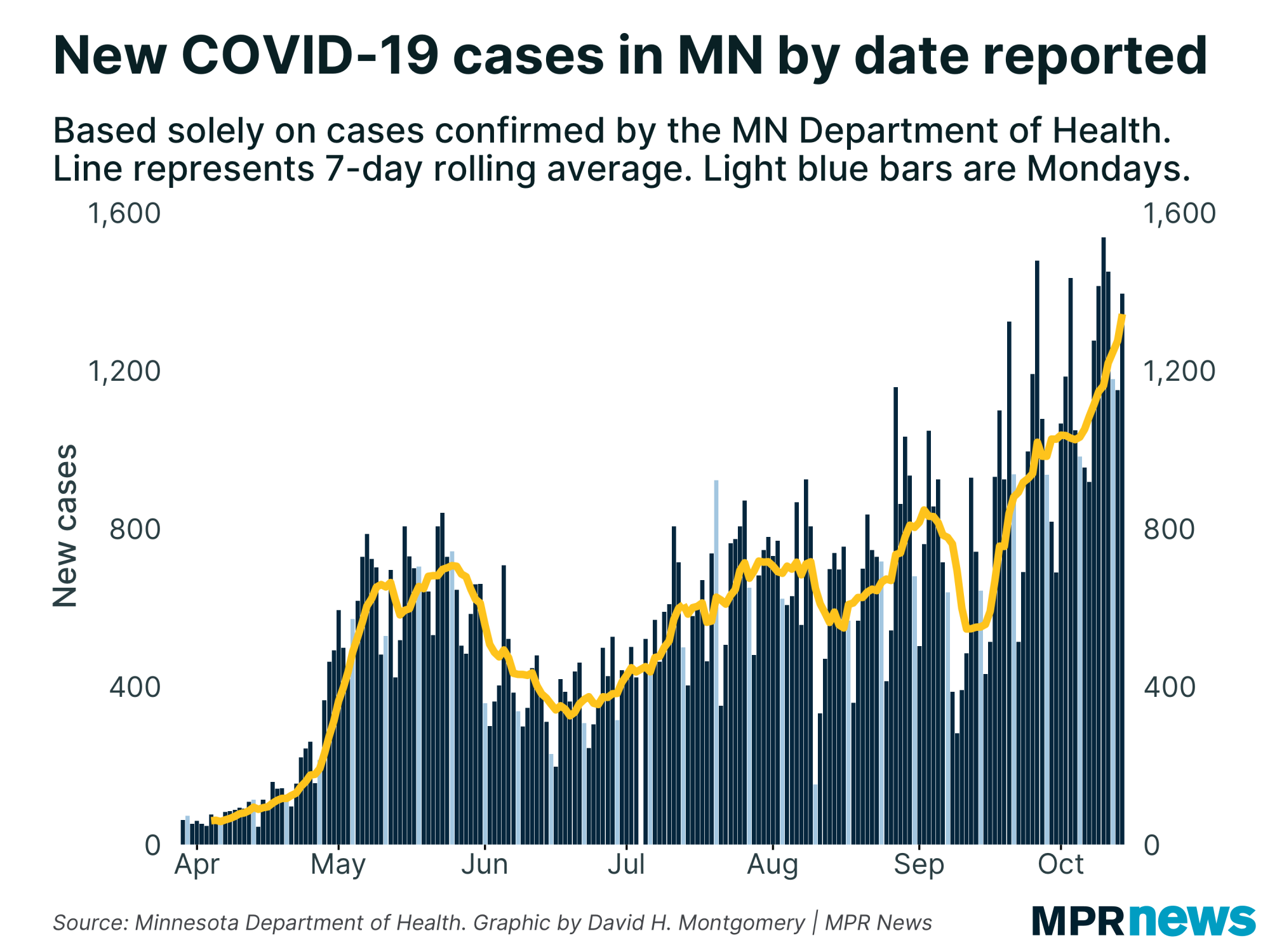 The agency said it made the move so its reporting would align with federal guidance. Antigen testing had been relatively small prior to this, so the change to previous case counts won’t be dramatic.

The state, though, is now adding to the COVID-19 death toll people who died after having had COVID-19 confirmed by an antigen (rapid) test but not a PCR test. That added six people to the state’s death toll Wednesday on top of 23 newly reported deaths. 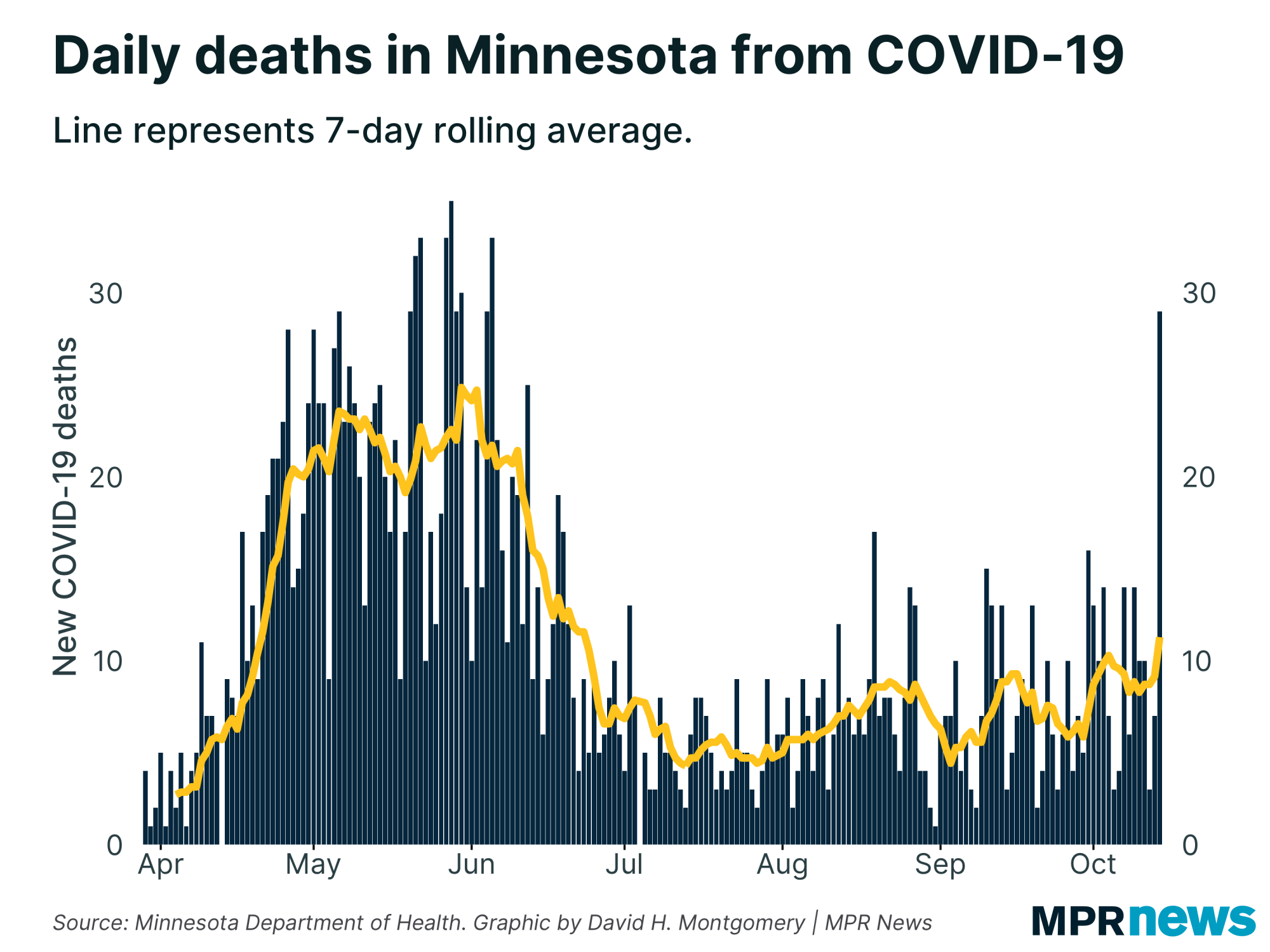 Even without the statistical tweak, it was still the highest number of daily deaths reported since mid-June. The jump follows similar spikes Wisconsin, which reported 34 deaths in its Tuesday report. North Dakota set a new record for daily deaths last week at 24.

A third effort aimed at removing Gov. Tim Walz from office has been tossed out. The Minnesota Supreme Court dismissed the latest recall petition in an order signed Monday by Chief Justice Lorie Gildea.

The voters who brought the recall petition argued that Walz overstepped his power with a statewide mask use mandate designed to limit the spread of coronavirus. They said it conflicted with a state law barring people from concealing their identity in public unless it is tied to protection from weather, religious beliefs or medical treatment.

Gildea’s order doesn’t reach a conclusion about whether the mandate is legal or not. But the chief justice said either way “the proposed petition does not allege facts that, if proven, would constitute malfeasance” required under the recall law. The prior recall attempts were turned back in May and July.

U of M eases COVID-19 restrictions at Twin Cities campus

The University of Minnesota, Twin Cities has moved into it's third stage of its plan for safely bringing students back to campus.

The school's four-stage “Maroon and Gold Sunrise Plan” limited the movement and interactions of students living in campus housing during their first weeks on campus.

The campus is now moving into stage three, meaning students have full access to campus and the surrounding community. But they have a midnight curfew to be back in the dorms.

The third stage will last about two weeks. The fourth and final stage, is "COVID-19" normal, meaning there are no back home time constraints, though students must avoid large gatherings, maintain physical distancing and wear masks, as they've had to do at all other stages.

The state prison in Stillwater is on lockdown after 90 inmates tested positive for COVID-19.

Routine mass testing this week found 90 new COVID-19 infections at the prison, bringing its total number of cases to 115, the Department of Corrections says.

The department says the inmates with confirmed cases either have no symptoms or are mildly symptomatic. However, a 70-year-old man is receiving medical attention outside the prison.

The department says in a statement that all but two of the men who tested positive reside in the Cell Hall D and Atlantis living units.

The Minnesota Department of Health and local officials are offering another round of free COVID-19 testing sites around the state this week.

For more details on times and testing locations — and to sign up for an appointment — go to the MDH website.

The state opened its first saliva testing site in Duluth late last month. The second site will open Wednesday at the Winona Mall.

Health Department officials say they are trying to be proactive as COVID-19 cases continue to surge around the state. They say that they're especially concerned about a growing spread of the coronavirus throughout greater Minnesota.

Saliva testing will be available to anyone who wants it or thinks they need it. So far more than 7,000 people have completed saliva testing at the first site in Duluth. State officials plan to open as many as eight more sites across the state in the coming weeks.

The Winona testing site will be open five days a week, from Wednesday through Sunday. Find more information here.

Close-knit St. John’s monks seek space to stay safe in pandemic: The monks share close quarters. They eat together three times a day and pray together four times a day. And many are still actively involved in teaching and ministry outside the abbey — at the university or in local parishes. When COVID-19 arrived, their close-knit community and collective way of life meant their most vulnerable members would be at risk.

Walz says loosening restrictions about 'striking a balance' between data, follow-through: The gobernor said he’s well aware that Minnesota is taking steps to relax precautions against spreading COVID-19, even as the pandemic widens in the state.

To read the original articles and see more COVID-19 reporting, follow this link to the MPR News website.  https://www.mprnews.org/story/2020/10/15/latest-on-covid19-in-mn