In this photo provided by the Minnesota Department of Natural Resources, a moose calf follows its mother in the snow near Grand Marais, Minn.  Photo: Pete Takash | Minnesota DNR file via AP 2014

In late September, Jeff Tibbetts walked quietly through the Superior National Forest north of Isabella, past a spot where, the day before, he had startled a bull moose, only to watch it run away before he had a chance to shoot.

After the miss, as a thunderstorm raged, he had lain awake in his tent, stewing over his mistake, unsure if he would get another chance.

But in the morning, he was encouraged. It was a beautiful fall day in the north woods, the sun filtering through the trees.

"You know how it is after a storm,” he said. “Everything has that smell; the colors are bright.”

As he walked quietly along the edge of an area that had recently been burned in a forest fire, he once again heard a moose in the trees.

“I could hear its antlers,” he said. “It's like plywood going through the woods." 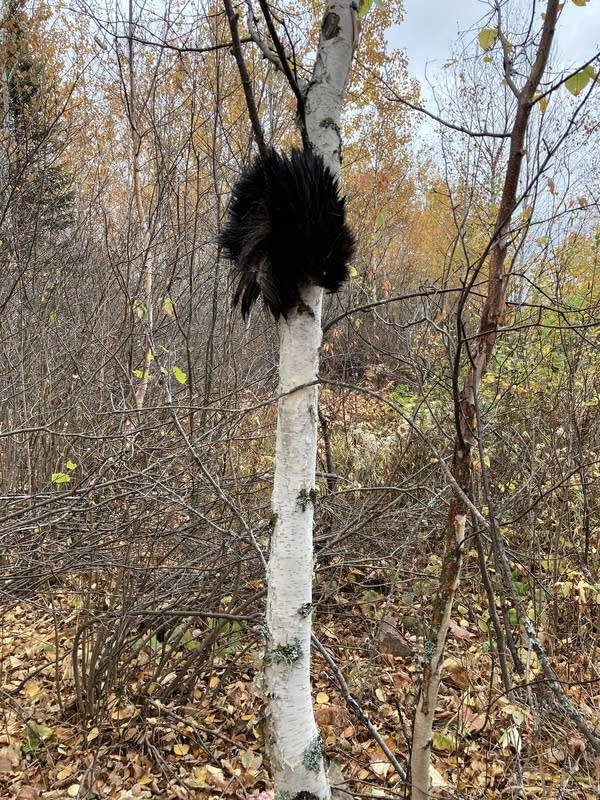 After harvesting 700 pounds of meat from the moose, Jeff Tibbetts cut off the bull moose’s beard, called a “bell,” and hung it from a nearby tree. The Ojibwe people have their own constellations, which include a moose in the fall sky, and a group of stars that signify the moose’s bell. As a younger hunter, Tibbetts learned to hang the bell in a tree after harvesting a moose — out of respect, and to represent the moose bell in the stars.
Photo: Courtesy of Jeff Tibbetts

This is the time of year female moose are in rut. Bulls are on the move, looking for a mate. Tibbetts cupped his hands together and imitated the bellowing call female moose make when they’re trying to attract a male.

He immediately heard the bull moose grunt in response. “And sure enough,” he said, “he started coming closer and closer — and he came [to within] 40 yards. And I shot him, and he ran back into the woods.”

Tibbetts followed the trail of blood about 75 yards into a swamp, where he found the moose, lying on its side.

His adrenaline was pumping. But at the same time, he felt calm, he said — almost mesmerized.

“I was very, very grateful, at the time. And I offered my tobacco and said some prayers. Don't get me wrong,” he said. “I was very happy and excited. But it is a humbling experience."

Tibbetts, 59, is a member of the Fond du Lac Band of Lake Superior Chippewa, where he works at the tribal college in Cloquet. He’s hunted with family members for as long as he can remember.

For years, the Minnesota DNR has not authorized a state moose hunting season, after a sharp crash in the iconic animal’s population. But more recently, as the moose population has stabilized, three Ojibwe bands in northeastern Minnesota — including the Fond du Lac Band — have allowed limited hunts.

Moose provide an important source of healthy, subsistence food for band members. The hunts also continue a longstanding cultural tradition. And they’re a powerful expression of the bands’ treaty rights, which were reestablished, after a long legal battle, in the late 1980s.

Tibbetts has been hunting for decades. But killing another living creature still weighs on him. He was taught as a young person that animals were willing to help his people.

"They're willing to sacrifice — and, you know, that's a big thing," he said.

After he prayed over the moose he had killed, Tibbetts called his cousin, who was hunting nearby. It took them five hours to skin and quarter the animal, and haul the 700 pounds of meat out of the woods. He's now sharing baskets of food with friends and family.

“It's an incredible source of organic, locally grown food,” said Mike Schrage, the Fond du Lac Band's wildlife biologist. “One moose can fill up a lot of freezers for a lot of people.”

The Fond du Lac Band issued permits to 60 groups of three to four hunters this year. Aided by favorable weather, band members hit their cap of 30 moose this fall in just nine days.

The Bois Forte Band of Chippewa and the Grand Portage Band of Lake Superior Chippewa have each set their caps at 10 moose this year. All three bands only allow for male moose — bull moose — to be killed.

The hunts are taking place at a time when the future of Minnesota's moose is uncertain. In 2006 there were nearly 9,000 moose in northeastern Minnesota. By 2013, their numbers had crashed to a third of that. Since then, the population has stabilized to an estimated 3,000 to 4,000.

"There are a lot of bull moose in this population,” said Schrage. “It's safe to put a little harvest pressure on the bull moose segment. [It] won't hurt the future of the herd. From a biological basis, it's safe to have a limited moose harvest."

The Minnesota Department of Natural Resources — which is responsible for regulating hunting on public lands in Minnesota — agrees that the bands’ hunts aren’t hurting the state’s overall moose population. 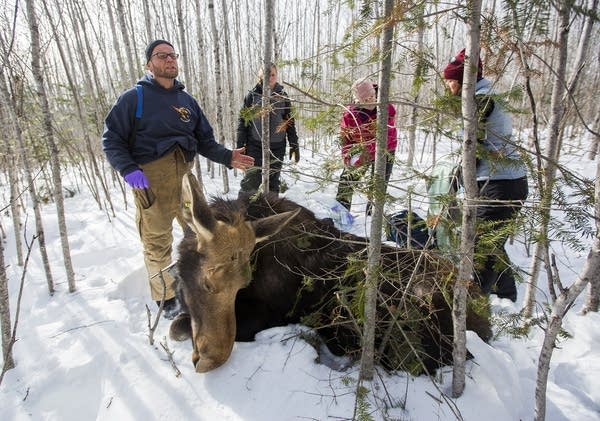 Seth Moore, wildlife biologist with the Grand Portage Band of Lake Superior Chippewa, finishes administering tests and attaching a collar to a moose in February 2016 on the Grand Portage reservation north of Grand Marais, Minn., as part of the band's ongoing research of northeastern Minnesota's moose population.  Photo: Derek Montgomery for MPR News 2016

"We do not oppose the tribal harvest that occurs,” said Barb Keller, who leads the agency's big game program. “We support a limited amount of hunting and harvest of moose by the bands for cultural purposes.”

Keller, though, described the moose population as “sensitive.”

Alarmed by the plummeting moose population several years ago, the DNR launched a landmark study in 2013, in which researchers outfit 100 adult moose and dozens of calves with GPS collars, so they could quickly respond to determine a cause when moose died. The Grand Portage Band has conducted similar research of its own.

The researchers have found that the biggest threats to Minnesota’s moose population are deer-related parasites and infections; winter tick infestations; and wolves and bears preying on large numbers of calves.

In 2013, the year it launched its study, the DNR ended its moose hunt.

The bands also suspended theirs.

But they resumed hunting three years later, despite the objections at the time of the DNR and of others in Minnesota who say that killing even one moose is one too many.

"Let's do what we can to give them a chance to recoup,” urged Robin Johnson, who started a small group several years ago called Save Minnesota's Moose. She was dismayed when she learned the Fond du Lac band had reached its harvest cap of 30 moose this year.

Even if the hunts don't impact the moose population long-term, she argues, they still take away chances to see giant bulls in the north woods.

“They should not be hunting them,” she said. “There's no reason they need to be doing that right now." 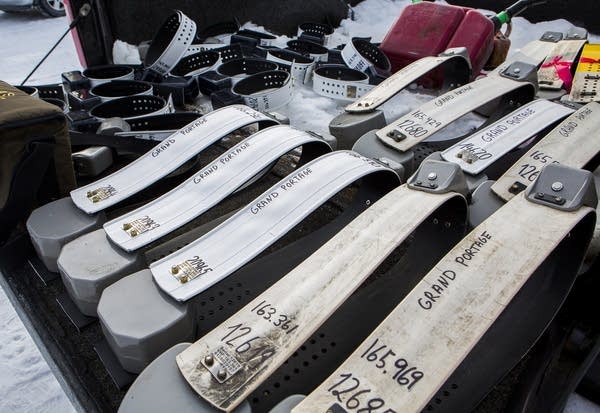 Collars sit in the bed of a truck before being used in moose research on the Grand Portage reservation.  Photo: Derek Montgomery for MPR News 2016

But Seth Moore, director of biology and environment for the Grand Portage Band of Lake Superior Chippewa, disagrees.

“Ojibwe people are just as important and have been on this landscape for just as long, and have just as much of a right to harvest these moose, as a wolf does, or as a bear does,” Moore said.

He argues that moose advocates should focus their energies on efforts he says would do more to improve the animal’s chances of continuing to thrive in northeastern Minnesota — including creating habitat with more forage for moose, and reducing deer and wolf populations in the moose range.

The Minnesota DNR says it has no plans to resume a state moose hunt for hunters who are not band members. Keller said the agency is resuming annual discussions with the bands over the terms of their hunts.

“We are interested in revisiting what allowable harvest should be, and reinitiating discussions,” Keller said. “We have not had annual discussions with the bands on allowable take of moose since 2012. So we are beginning that process again.”

A duty to hunt

Hunter Jeff Tibbetts said he understands the perspective of people who want to protect the moose. But for him, the right to hunt is deeply meaningful.

The Fond du Lac, Grand Portage and Bois Forte bands conduct the moose hunt across a broad swath of land in far northeastern Minnesota where they retain the rights to hunt, fish and gather — territory ceded to the federal government in 1854.

But for decades, Ojibwe bands were denied those treaty rights. The courts recognized those rights in the late 1980s, after a Grand Portage tribal member sued the state when he was arrested for shooting a moose outside the boundaries of the Grand Portage Reservation.

“I remember the excitement of being able to do that, legally, without fear of punishment,” he said.

By exercising treaty rights “in a mindful way,” band members strengthen their community “and establish ourselves as the sovereign entity that we are,” he said. “So it's very empowering, and also almost like a duty, to go out and do that for our nation.”

To read the original article and see related stories, follow this link to the MPR News website.  https://www.mprnews.org/story/2020/10/12/bands-continue-moose-hunts-for-tradition-treaty-rights