Minnesota high school football and volleyball are back on for the falls sports season.
After an August decision to postpone those sports until the spring, the 20-member Minnesota State High School league board on Monday OK’d fall games.

The Minnesota State High School League board of directors voted 15-3 to begin football and 14-4 to allow volleyball to resume.
For eligible schools and districts, both seasons will start Sept. 28, with an 11-week season for volleyball, and a 10-week season for football, with no less than six regular season games.
League Executive Director Erick Martens said traditional post-season tournaments are unlikely. He said the league didn’t put aside money to pay for them, and didn’t know how it could practically overcome a 250-person spectator limit.

“What remains would be anything that might potentially pay for itself with 250 fans, if that were the case. And it is not recommended that we bring lots of representatives from multiple communities together,” Martens said.

There may be a two-week regional playoff season for football. The board may take up that discussion in early October.  League officials in August decided to push volleyball and football into the spring season due to COVID-19.

A survey by the high school league asking its 500 member schools on when football and volleyball should be played drew 394 responses, with 80 percent favoring fall football and 76 percent supporting fall volleyball.

Although medical experts said their cautions about close-contact activities remain because of the disease, officials said early indications in other high school activities aren’t showing noticeably greater risk of transmission.

Kris Ehresman, infectious disease director for the Minnesota Department of Health, said sports have led to 62 outbreaks or clusters, including 15 associated with basketball, nine with soccer, nine with hockey, nine with football and six with volleyball.

Ehresman said last week that she saw “no difference now in risk from earlier in the summer when the MSHSL decided to wait on these sports.’’ 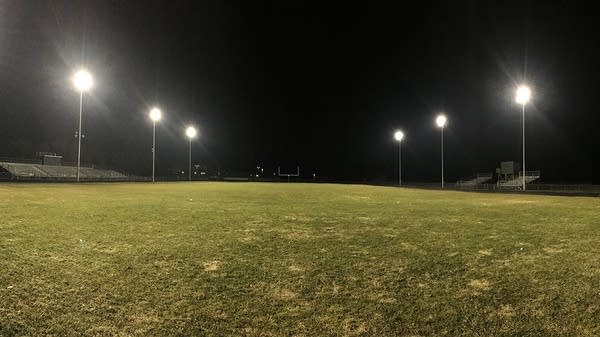 The lights at the empty Pine City High School football field in Pine City, Minn., are switched on in April 2020 as part of the "Be the Light MN" campaign.
Photo by Bill Christianson file

Others stressed that some football fields might be unusable in the spring.

“What we don’t know is what is our potential for weather in March,” Bob Madison, an assistant league director, told the board Monday. “We have data, but we’re starting with snow on the ground and frozen fields in most cases.”

To read the original story and see related reporting, follow this link to the MPR News website.  https://www.mprnews.org/story/2020/09/21/fall-high-school-volleyball-season-to-resume-in-minnesota