What to do with ‘46 pounds of zucchini'? First-time gardeners discover canning Angie Boehmer canned everything from spicy pickles to tomato soup in the weeks after she started canning.  Photo: Courtesy of Angie Boehmer

Until just a few years ago, Angie Boehmer’s grandmother used to make and can spicy pickles using cucumbers her grandfather grew in their garden in Inver Grove Heights, Minn.

When Boehmer got a craving for those pickles last month, she called her grandmother for tips, went to the farmers’ market and then canned pickles for the first time ever.

The old-time skill of canning is seeing a surge of interest from first-time canners like Boehmer. Some are concerned about reducing their carbon footprint, while others are just looking for things to do as they're stuck at home during the age of COVID-19. Canning joins the pandemic pastimes of bread-making, sewing, gardening, home-brewing and decluttering. 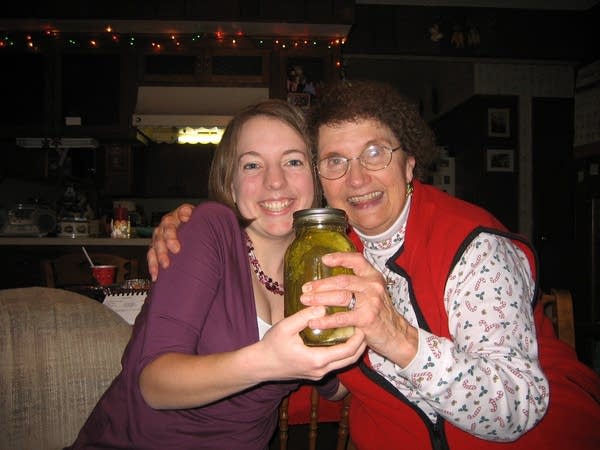 Angie Boehmer and her grandmother Barb with a newly canned jar of pickles she made using her family's traditional recipe.  Photo: Courtesy of Angie Boehmer


And it’s sent canning supplies flying off the shelves. Companies that make jars and lids have “experienced unprecedented demand,” which has led to shortages in stores and online, according to a spokesperson for Newell Brands, which owns Ball jars.

The normally dusty canning sections at big-box stores are almost completely bare. It’s even been hard to keep canning supplies on the shelf at the tiny Welna II Hardware and Paint in the Seward neighborhood of Minneapolis. The store is completely out of the typical pint jars, quart jars and wide-mouth lids that canners need to safely do their work, said said store manager Henry Kwant.

“It’s normal going into the fall for there to be like a little blip of more purchases of canning supplies,” Kwant said. “But I would say close to 10 people, if not more, per day are asking for lids, bands or the more common size jars.”

While there are some brand-new canners in the bunch, it’s not unusual for people in the eco-conscious Seward neighborhood to grow and can their own vegetables, Kwant said. The hardware store is across the street from a community garden hosted by a longtime vegetarian cafe that’s collectively run by employees.

“It seems like it's mostly people who typically did it in years past, but just are needing more of it,” Kwant said. “Maybe because they've had more time on their hands and maybe they've grown more.”

Sarah Green Toews has been canning as long as she remembers. Her parents owned a greenhouse in west-central Minnesota, and they’d preserve whatever they grew in their home gardens.

“When I went to college, I realized I missed homemade pickles and jams,” she said. “So as soon as I could get my hands on that stuff, I started doing it myself.”

Green Toews’ husband actually used pickling in his initial pickup line to her. He said he grew vegetables in a community garden and pickled them himself, and asked whether she was interested.

“‘I might be the only woman under the age of 80 who says yes to this, so we obviously need to go out,’” Green Toews replied. “We'll be married for 12 years in September.”

Green Toews, who now lives in Roseville, Minn., is a master gardener certified through University of Minnesota Extension. She said she’s noticed for the last few years that she’s been getting more questions about vegetable gardening and canning, partly in response to concerns about climate change and pesticides.

“‘Oh my god, I have 46 pounds of zucchini, what do I do with it?’” Green Toews said. “That's sort of the natural progression as well — part of what you can do is preserve your harvest.”

The art of canning skipped a few generations in the United States, she said, but “those folks who grew up in the Depression era, before the baby boom, are a treasure trove of expertise and practicality around these things.”

One obstacle new canners face is fear that they’ll do something wrong and contaminate their batches with botulism or other dangerous microorganisms. Green Toews said that’s why it’s important that canners follow specific recipes for each item they’re hoping to can. They’ve also got to be sure all their equipment is sterilized and in good shape.

“When in doubt, throw it out,” Green Toews said. “If something doesn't look right in the jar, it's OK to get rid of it.”

The boom in canning is partly about sustainability and local food, but she thinks shortages of items like toilet paper during the pandemic are also fueling some of the interest in canning.

“There's lingering concern about if there's going to be disruptions in the food supply chain,” Green Toews said. “‘What can I grow now? So I know we've got salsa next winter because I made it and put it in the jar.”

First-time canner Boemer said the pandemic really didn’t factor into her entry to canning. She likes to take on projects to keep her busy. 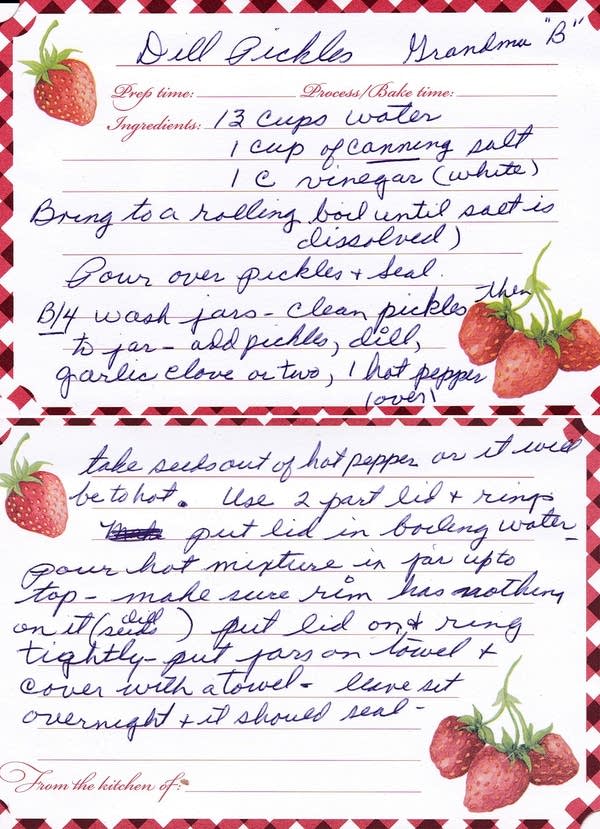 "Grandma" Barb Boehmer's dill pickle recipe that inspired her granddaughter to take up canning this year.    Image: Courtesy of Angie and Barb Boehm

After she made pickles, a good cocktail inspired her to can some cherries. That gave her more ideas, and she headed back to the farmers’ market with a list of ingredients for things like salsa and corn relish, which culminated in a busy Sunday afternoon.

“I enjoyed it up until the last two hours, and then I was hot and sweaty, my kitchen was a mess,” Boehmer said. “But I was knee-deep in it, and so I couldn't stop.”

Boehmer vowed that night to retire from canning. But she said that sentiment wore off, and she’s been thinking lately about what else she can make.

“I poked fun at it, that maybe subconsciously I'm channeling some variety of Laura Ingalls Wilder,” Boehmer said.

If people continue to socially distance throughout the winter, Boehmer said, the canned goods could be fun to give as gifts to friends and family. But if she tries them and they taste terrible, she said, she’ll probably keep them to herself.

New to canning? We asked Sarah Green Toews to share her advice for first-timers. Here’s how she broke it down:

Understand the science of food

Both University of Minnesota Extension and the U.S. Department of Agriculture have comprehensive online resources on canning. Do your research because knowing how food preservation works will help you confidently and safely start to can.

Be vigilant about bacteria

New canners often ask how necessary it is to follow all those safety guidelines related to sanitizing equipment, cans, lids and jars or peeling certain foods. The answer is that — with canning, you cannot be too careful. Follow those guidelines exactly.

Use a trusted recipe book

The book should include tested recipes specifically for canning from a trusted source. As an example, Ball's Blue Book of Preserving is an often-referenced guide and is updated regularly as safety guidelines are revisited. Because moisture and acidity levels are so important to food safety, it's important to follow recipes as written.

New or like-new jars with no imperfections are critical for a strong seal. It's worth the peace of mind to make sure lids, rings, jars and other equipment have no flaws. This not only ensures the canned food will be safe, but has the added benefit of minimizing waste if a jar doesn't seal correctly.

It's tempting to buy produce in bulk or to address a bumper crop with dozens and dozens of jars. It can be disheartening to make a mistake and have to toss everything — or worse, to go to your preserved items weeks or months later to find things spoiled. USDA guidelines recommend that you avoid preserving more food than you can consume in a year.

All of that sounds like a lot to remember. But canning really is fun. And food you make yourself with fresh, local produce is delicious. Most home canners are willing to help beginners and love to share their expertise. Find a friend and learn from one another!

To hear an audio report of this story and see related articles, follow this link to the MPR News website. https://www.mprnews.org/story/2020/09/21/firsttime-gardeners-discover-canning