But looking at a longer period of time, the state’s COVID-19 case numbers have been trending down since a modest spike in late August.

Reports from the Minnesota Department of Health show Minnesota has averaged about 550 new cases a day over the past week, down from more than 800 late last month. Hospitalizations also are down. 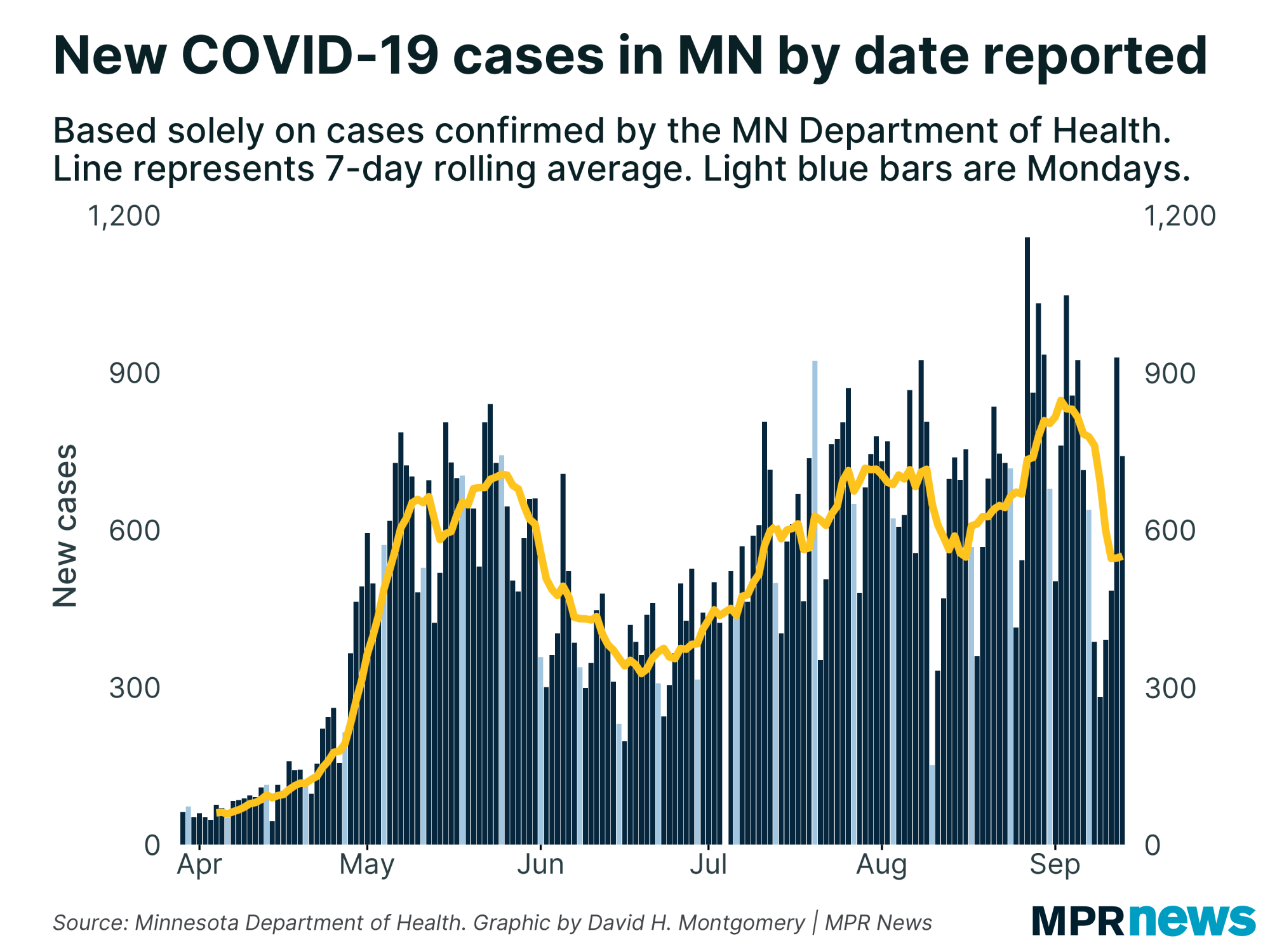 Deaths have been on an upward trend in recent days. Because deaths from COVID-19 may come several weeks after infection, the recent rise might reflect the late-August spike in cases.

Health officials in Minnesota and around the country will be watching in the week ahead for any signs of a rise in infections tied to Labor Day weekend gatherings. 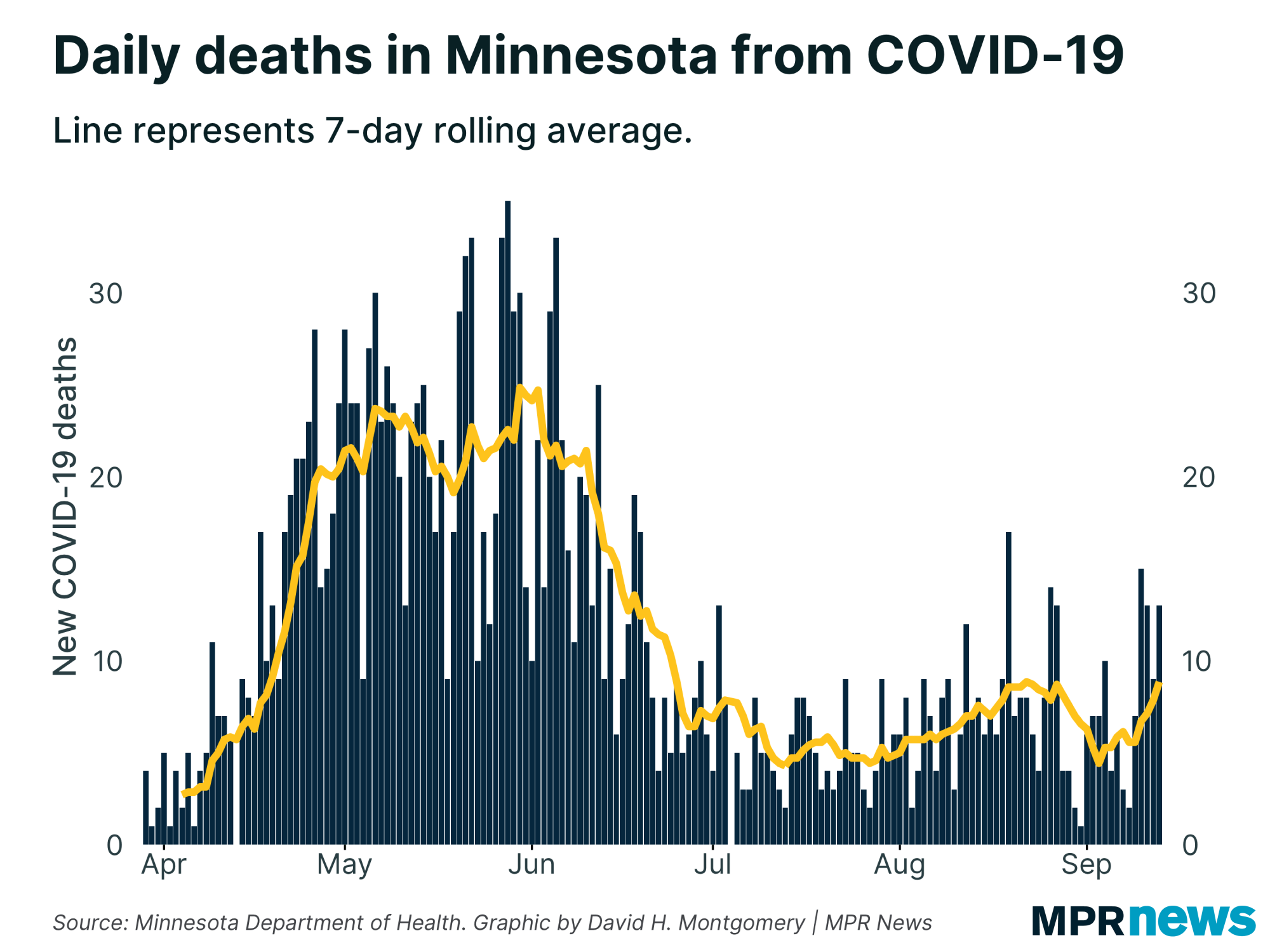 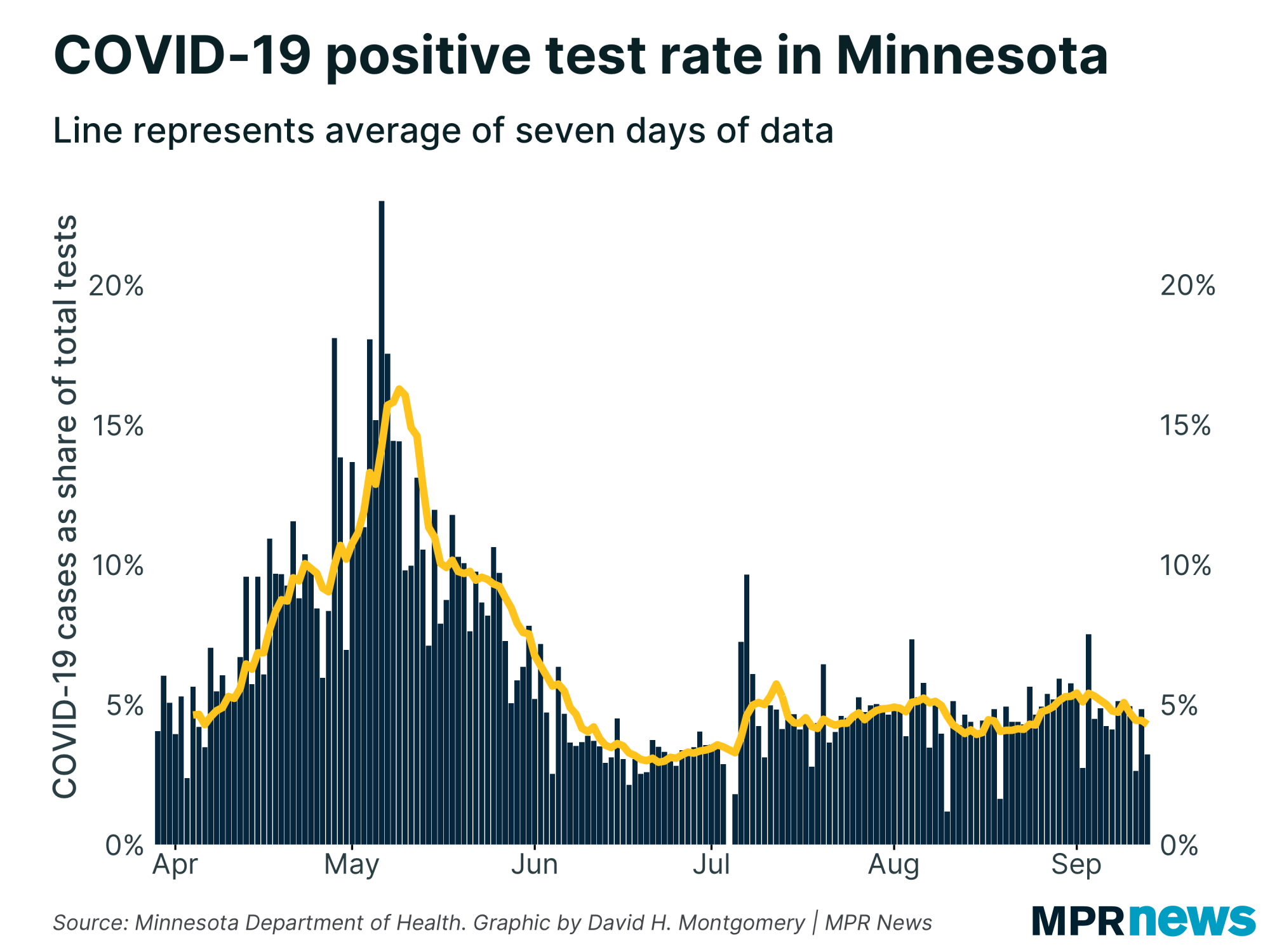 COVID-19 cases in Wisconsin have risen by two-thirds in the past two weeks, to the state’s highest-recorded levels.

On Sunday, Wisconsin reported more than 1,550 new confirmed cases, a new record for the state. It’s also more cases than Minnesota, Iowa, North Dakota or South Dakota have ever reported in a single day. Nor is it an outlier — Wisconsin’s number of new cases has been rising for two weeks, while its number of new tests has remained flat.

Adjusted for population, Wisconsin is averaging more than 200 new cases per million residents, twice as high as Minnesota. Though a record for Wisconsin, Iowa and both Dakotas saw significantly higher rates in late August. Since late August, Iowa and South Dakota have seen their cases fall, while North Dakota continues to report high numbers of new cases per capita. 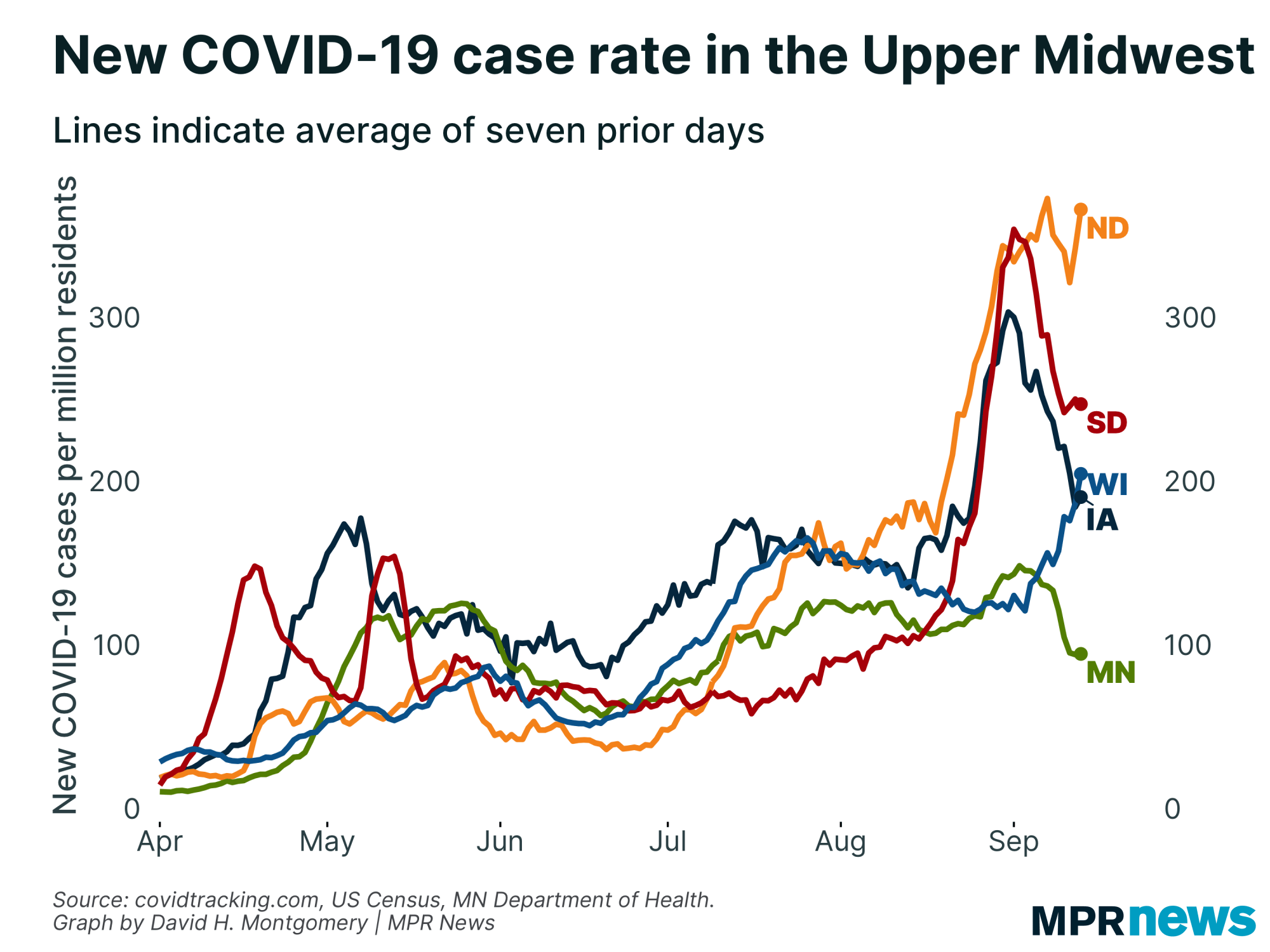 People in their 20s make up the age bracket with the state’s largest number of confirmed cases — more than 19,000 since the pandemic began, including more than 11,000 among people ages 20-24.

They’ve been driving the recent outbreaks, although the number of high school-age children confirmed with the disease has also grown, topping 7,500 total cases for children 15 to 19 years old since the pandemic began. 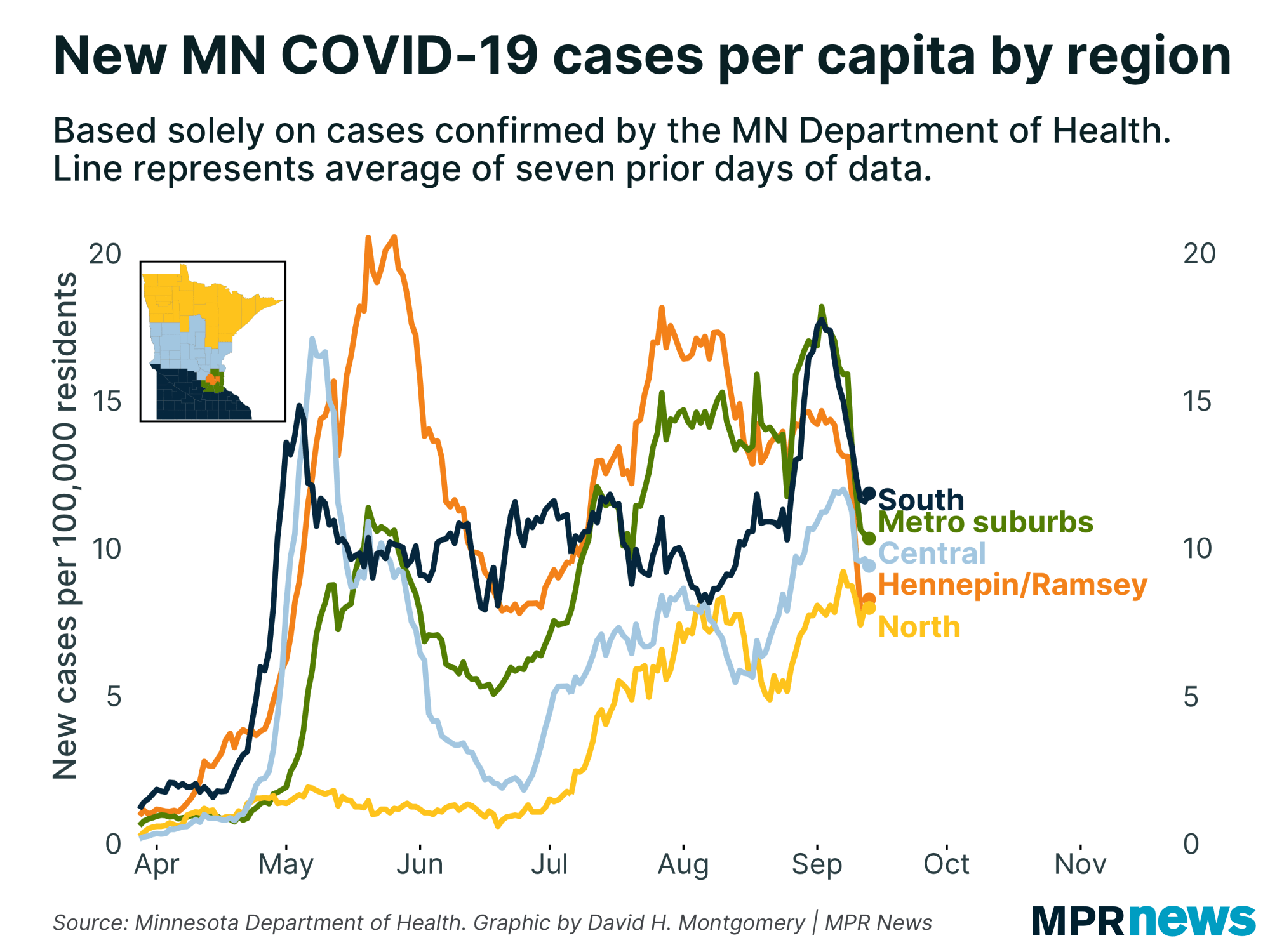 On Sunday, just across the border from Minnesota, the University of Wisconsin-La Crosse responded to rising cases by moving all in-person classes online, closing dining halls and most campus buildings and mandating face coverings at all times on campus, indoors or outdoors.

Classes are suspended Monday and Tuesday before resuming online on Wednesday.

“I share the disappointment and frustration of students, families, faculty and staff who had hoped we might enjoy the start to this fall semester together,” chancellor Joe Gow said in an all-campus email Sunday. 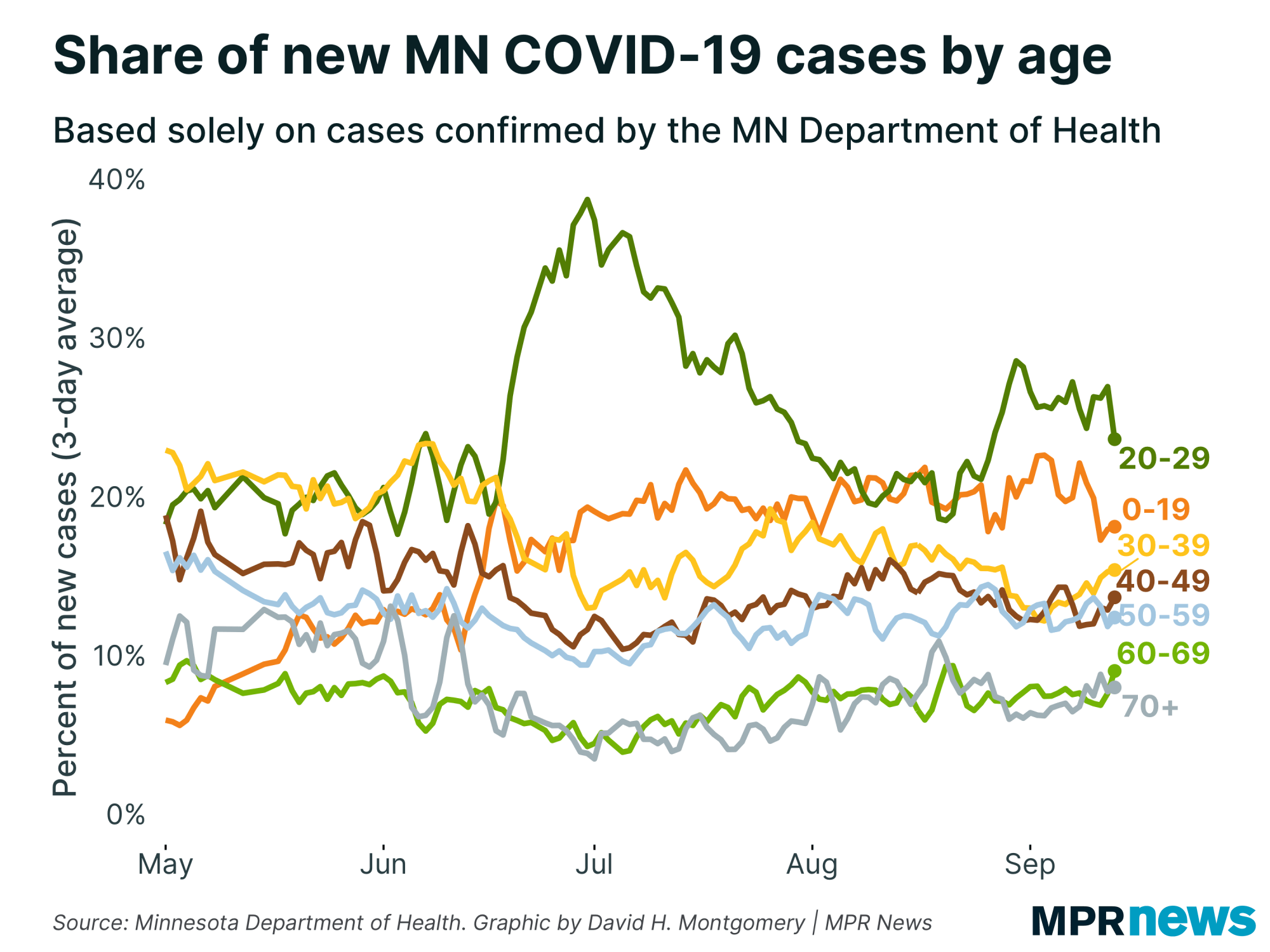 The move at UW-La Crosse followed a decision last week at nearby Winona State University in Minnesota to implement an immediate 14-day campus quarantine that will limit all nonessential activities on campus to slow the spread of COVID-19.

While less likely to feel the worst effects of the disease, experts worry youth and young adults will spread it to grandparents and other vulnerable populations and could also hamper attempts to reopen campuses completely to in-person teaching. 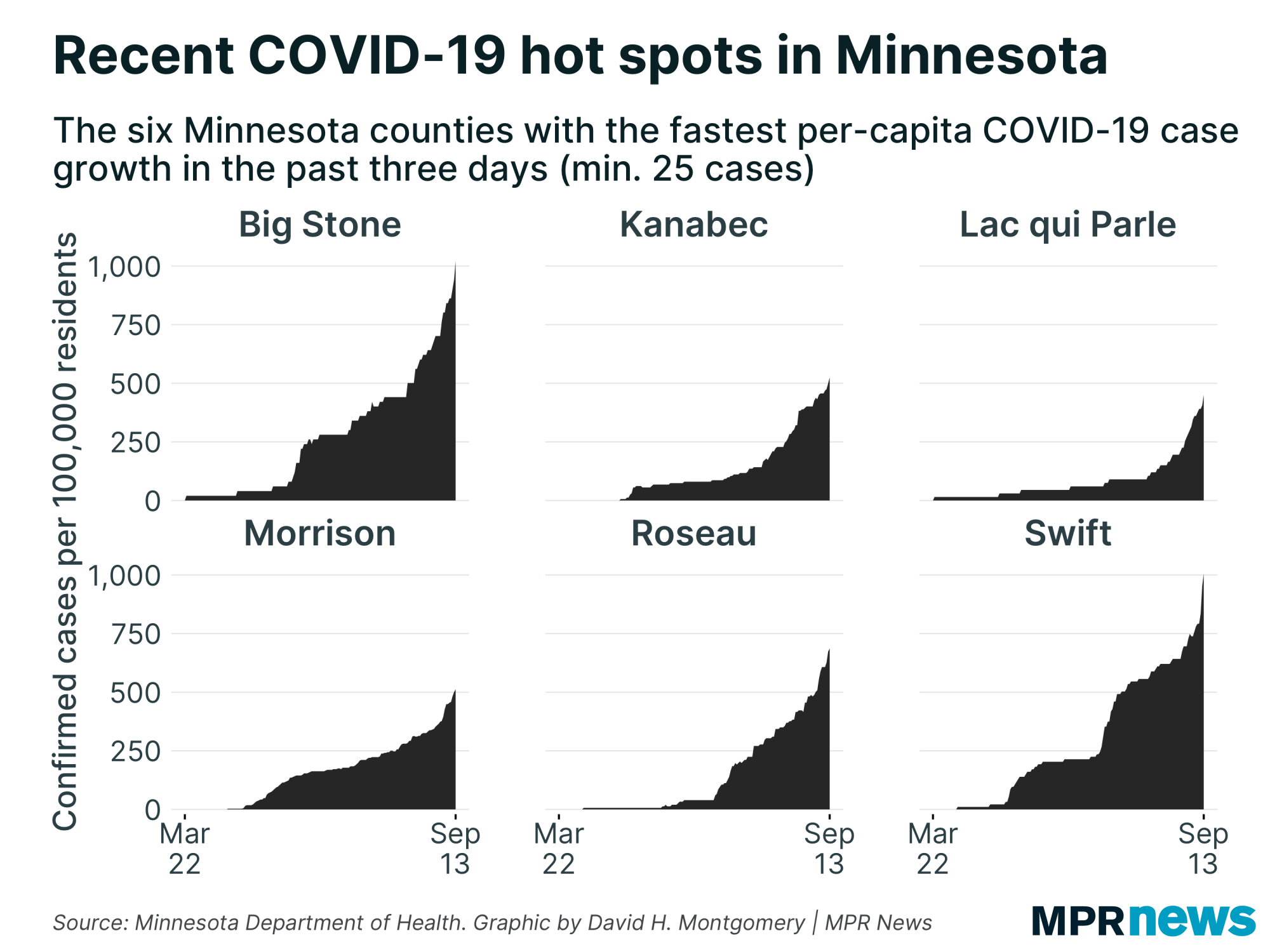 Regionally, the Twin Cities and suburbs had been driving the counts of newly reported cases. Recent data, though, show cases have been climbing in northern and central Minnesota. Friday’s data, however, showed new case counts retreating across the state.

Still, the number of active, confirmed cases of COVID-19 in Minnesota remains at around 6,000 cases on a seven-day average. 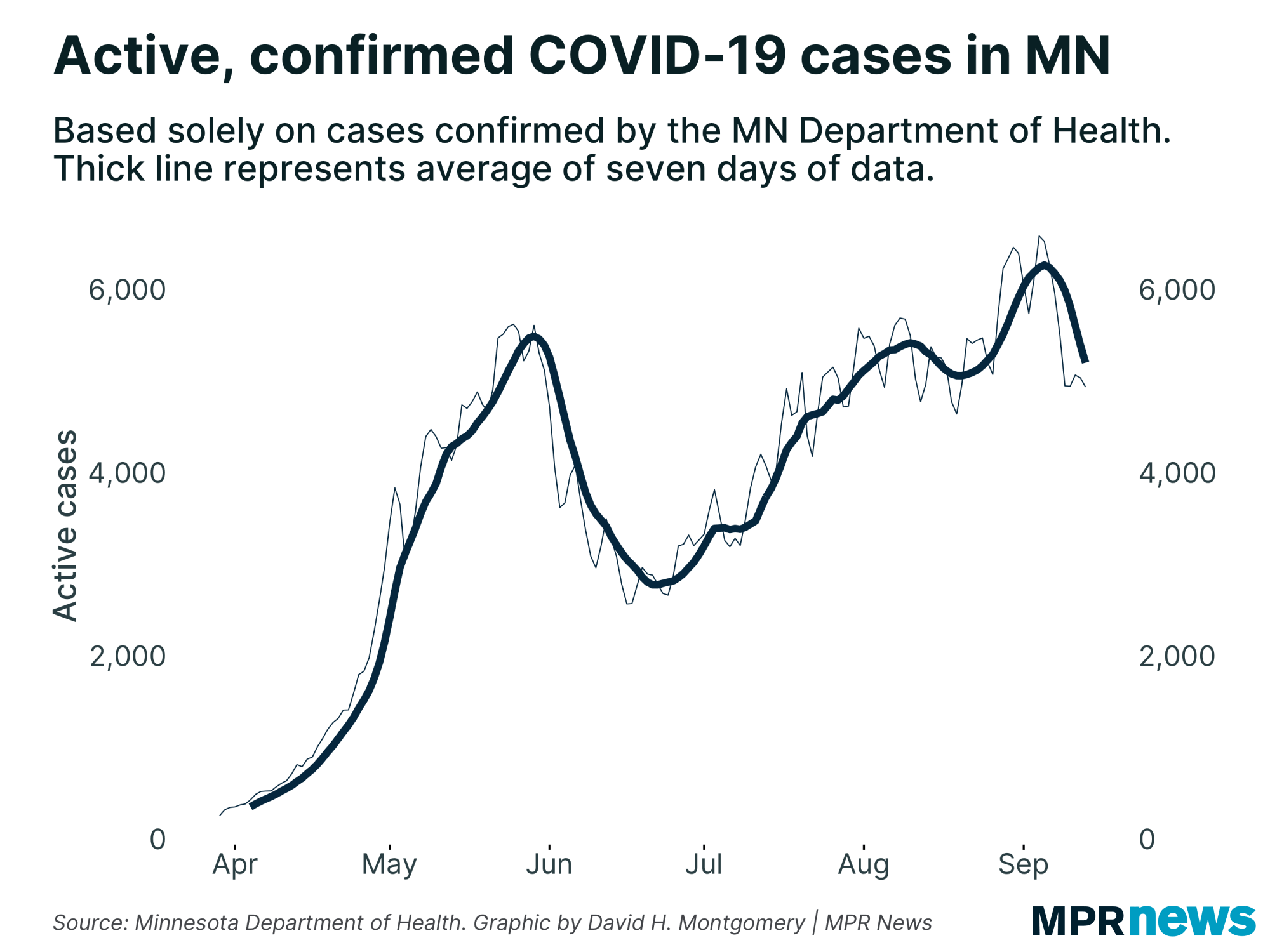 A group of parents rallied outside the governor's residence on Saturday evening in St. Paul to urge the Minnesota State High School League to allow football and volleyball this fall.

The league approved a plan in August pushing the two popular fall sports to the spring with shorter schedules and other COVID-19 restrictions.

Dawn Gillman of Dassel, Minn., founded the group Let them Play MN; she said the Facebook group drew thousands of members in just a few days.

Gillman's two sons play high school football, and she said parents — not the league — should decide whether their children can compete this fall. Gillman said she is doubtful that a spring season will happen.

"Tell me if our ground is going to be thawed," she said. "The likelihood of us having a season in the spring is so small."

Other fall sports, such as soccer and cross country, started in mid-August with shortened seasons.

Federal jury trials set to resume in Minnesota: Monday’s case will unfold with a range of safety precautions in a St. Paul courtroom. Plexiglass panels have been erected between juror seats, and potential jurors have been screened for health risks.

To read the original articles and see related COVID-19 reporting, follow this link to the MPR News website.  https://www.mprnews.org/story/2020/09/14/latest-on-covid19-in-mn