By Eric Freedman of the Spartan Newsroom - September 11, 2020

When L. David Mech arrived at Isle Royale in 1959, he had no idea he would pioneer the nation’s longest-running prey-predator study, one that would become a model for wildlife biologists around the world.

Nor did he likely expect to eat beaver brains or loon there.

Mech’s adviser had sent him to the remote national park in Lake Superior to study the interaction between wolves and moose. The beginning grad student from Purdue University received these instructions:

“Learn the island. Hike the trails, cruise the shore by boat, learn the topography, the plants, the animals. Take note of where you see moose, where you find fresh wolf tracks,” Mech wrote in his new memoir, “Wolf Island: Discovering the Secrets of a Mythic Animal” (University of Minnesota Press, $24.95). “Collect wolf scat to learn about their diet, and moose bones, especially jawbones, to learn about their age and state of health when they died.”

It proved a heady introduction to one of America’s most isolated and least-visited national parks. Yellowstone National Park – where Mech later helped reintroduce wolves into the wild – hosts more visitors on a single summer day than Isle Royale does in a full season that runs from May through October. Isle Royale is closed in the winter.

Mech spent three summers and three winters hiking, boating and flying around the island tracking the elusive wolves and the animals they fed upon. 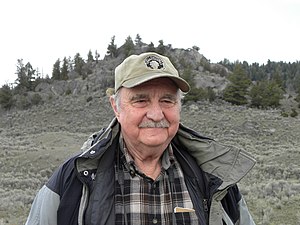 He fought snowstorms and heavy winds, autopsied partly eaten moose corpses and witnessed the disappearance of homes where generations of commercial anglers had lived – before the invasive sea lamprey decimated native lake trout.

Mech’s most surprising important discovery was that even large wolf packs, with as many as 15 members on Isle Royale, fail to kill the vast majority of moose they chase – a success rate of less than 8%. He also discovered that the moose most likely to die from wolf attacks are older than 9 or 10 or weakened by ticks, tapeworms or disease.

Wolves, he said in an interview, must “travel far and wide to find an animal vulnerable to kill with enough safety.” As for preying on moose calves, their mothers wage a “very dramatic and aggressive defense.”

The study, ongoing for more than 60 years, had been planned to last for only 10.

Mech “very much had his feet planted on the ground,” said professor John Vucetich of Michigan Technological University’s College of Forest Resources and Environmental Science, and was the first to use now-common methods to study the dynamics of the island’s wolf and moose populations.

Vucetich, now a lead researcher on the Isle Royale project, said nobody had counted moose and wolves before, and nobody “knew for sure whether wolves were territorial or in family groups” before Mech did his field research.

Today, the 83-year-old Mech is a senior research scientist for the U.S. Geological Survey and an adjunct professor at the University of Minnesota. He’s the founder of the International Wolf Center in Ely, Minnesota.

Growing up in northern New York, Mech ate raccoons, possums, deer and pheasant. As a bear researcher in college, he feasted on meat from bears that had to be euthanized. In the interview, he spoke of trapping and eating muskrat as a Boy Scout.

Then beaver brains and loon turned up for dinner on Isle Royale.

Mech was working with a researcher who was trapping beavers on Isle Royale for a separate study.

“So I opened the skull, spread the brains out on a piece of aluminum foil, baked them and then spread them on toast,” he wrote. “I don’t recall whether we salted and peppered them, and maybe we should have used a bit of ketchup, because it turned out the baked beaver brains on bread really could have used something.

As for the loon, it had gotten tangled in a fishing net and drowned. His wife boiled it for dinner – “a chance to try something new. It was what you expect of a large, oily bird that spent its life eating fish – but worse. It was honestly one of the very few wild foods I could not choke down,” he wrote.

He finished his three years of field research at Isle Royale “with, perhaps, an illusion of wolf-moose system stability,” where the wolf and moose populations remained relatively steady.

However, as other scientists continued the research over the next decades, it became evident that the numbers of the animals rose and crashed, largely due to changes in weather and climate.

The imbalance got so dire that by 2016 there were only two wolves left on Isle Royale. As a result, the number of moose soared, threatening starvation as they overgrazed their food sources.

In 2018, the National Park Service began a multiyear program to relocate wolves from the mainland United States and Canada to Isle Royale. As of last December, there were seven females and eight males living on the island, the agency said.

Mech predicted that the island’s predator-prey situation “will adjust itself pretty quickly. Depending on how well the reintroduced wolves propagate, there’s every reason to believe that within a couple of years they will repopulate the island,” he said in the interview.

Eric Freedman is professor of journalism and former associate dean of International Studies and Programs. During his 20-year newspaper career, he covered public affairs, environmental issues and legal affairs for newspapers in New York and Michigan, winning a Pulitzer Prize for coverage of a legislative corruption scandal. He teaches environmental journalism and serves as director of the Knight Center for Environmental Journalism. He also teaches public affairs reporting, international journalism, feature writing and media law and serves as director of the school’s Capital News Service