Latest on COVID-19 in MN: As hospitalizations climb, a plea to 'do the right thing' Medical gear is placed outside the room of a COVID-19 patient in the ICU at Oakbend Medical Center in Richmond, Texas, on July 15.  Mark Felix | AFP via Getty Images file

With every decision Minnesotans make now about masking or not masking, socially distancing or not, “you are contributing to the solution, or to the crisis,” Kris Ehresmann told reporters.

While public health leaders continue to work to manage the disease, “we cannot do this on our own,” she said. Success depends on Minnesotans to “do the right thing” in their behavior.

Given the massive outbreaks elsewhere in the United States, Minnesota does not want to be like “states that didn’t see the COVID train before it ran them over,” she warned.

Separately on Wednesday, Minneapolis Mayor Jacob Frey said the city will again pull back indoor service at bars and bar areas effective Saturday to try and check the accelerating spread of the disease. 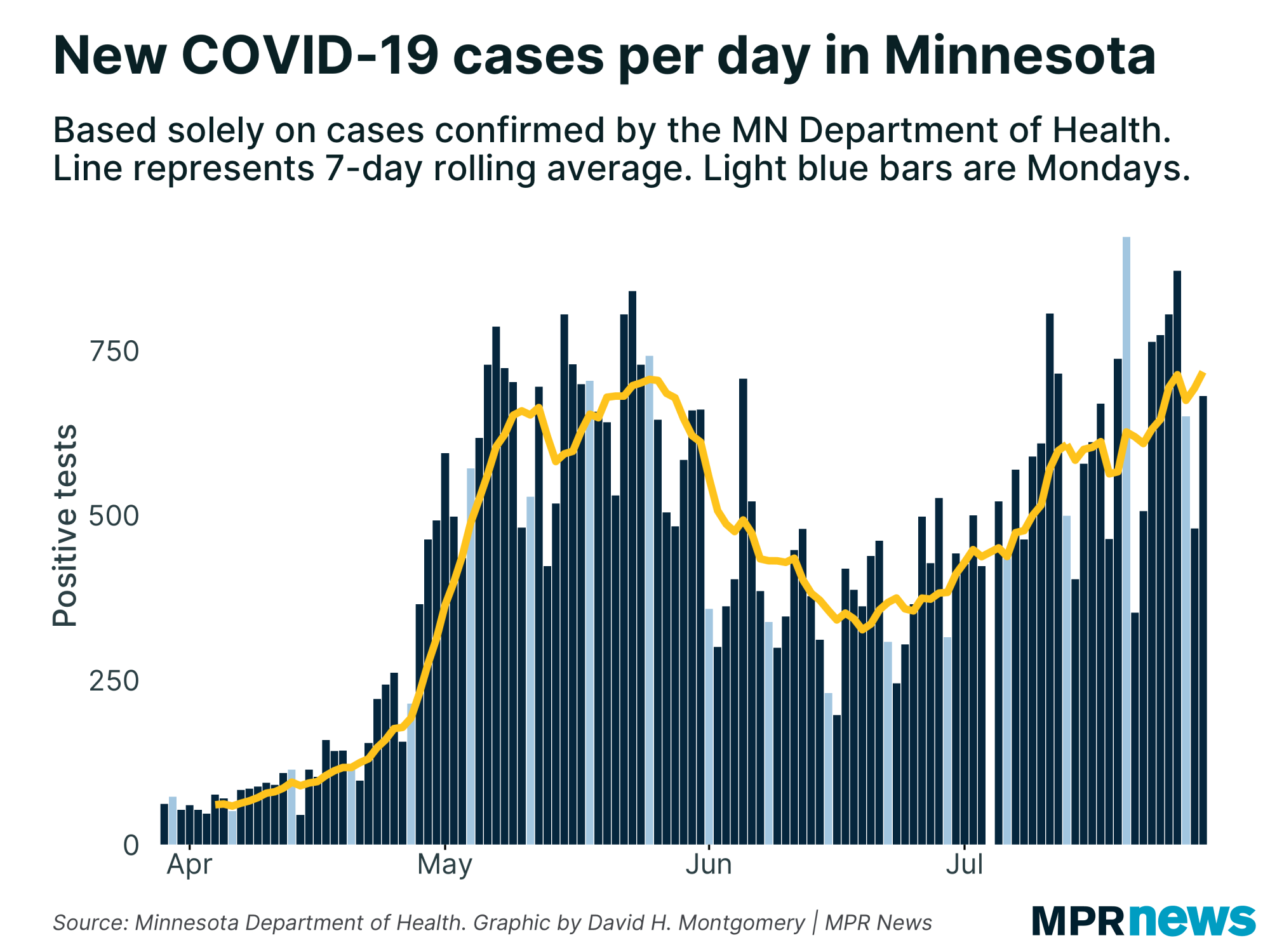 Restaurants can still operate indoor food service and wait staff can bring alcoholic drinks to tables, but indoor bar areas within restaurants, entertainment venues, taprooms and nightclubs must convert that space to seating or otherwise close off their physical indoor bar spaces.

While the “vast majority” of Minneapolis bar owners are doing what they can to keep patrons safe, “bars are where people go to mingle” and “often forget about their responsibilities,” Frey said as he unveiled the new restrictions. “A night out at the bar is too often leading to nights in the hospital for family, for friends and for neighbors.”

Frey said that Minneapolis is running about a 9 percent positive test rate right now, far higher than the roughly 5 percent rate statewide. City officials said hundreds of COVID-19 cases have been traced to bars, including three outbreaks among bar employees.

Not ‘just a blip’

It’s the first time in a month that total current hospitalizations rose above 300, the product of a weekslong upswing in new confirmed infections, coming a day after Minnesota saw one of its largest one-day increases in hospitalizations since the pandemic began. 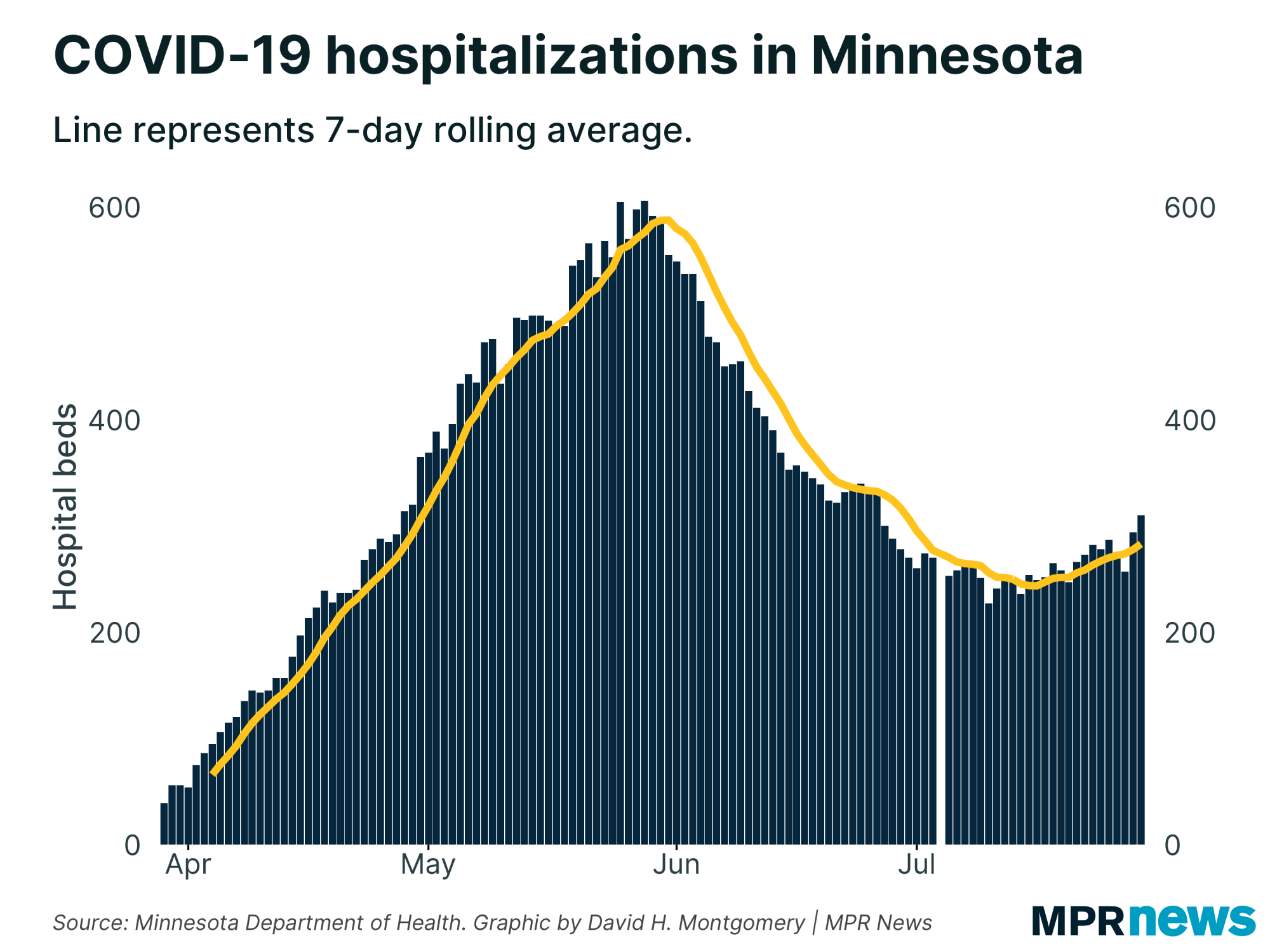 The number of daily deaths continues in single digits — nine more death were reported on Wednesday. New cases, however, continue their upward climb with another 681 confirmed.

While hospitalizations still remain far lower now than at the late-May peak, officials have been bracing Minnesotans in recent days to expect a surge following the climb in new confirmed cases. That appears to be happening.

“As we have feared, we are seeing our hospitalizations begin to increase, and I don’t think it’s just a blip,” Ehresmann said.

Current hospitalizations and ICU cases are two metrics closely watched by public health leaders as they try to manage the spread of the disease so it doesn’t overwhelm the care system.

Of the 52,947 confirmed COVID-19 cases during the pandemic, about 88 percent of those infected have recovered to the point they no longer need to be isolated.

Among the 1,589 who’ve died, about 77 percent had been living in long-term care or assisted living facilities, nearly all had underlying health problems. 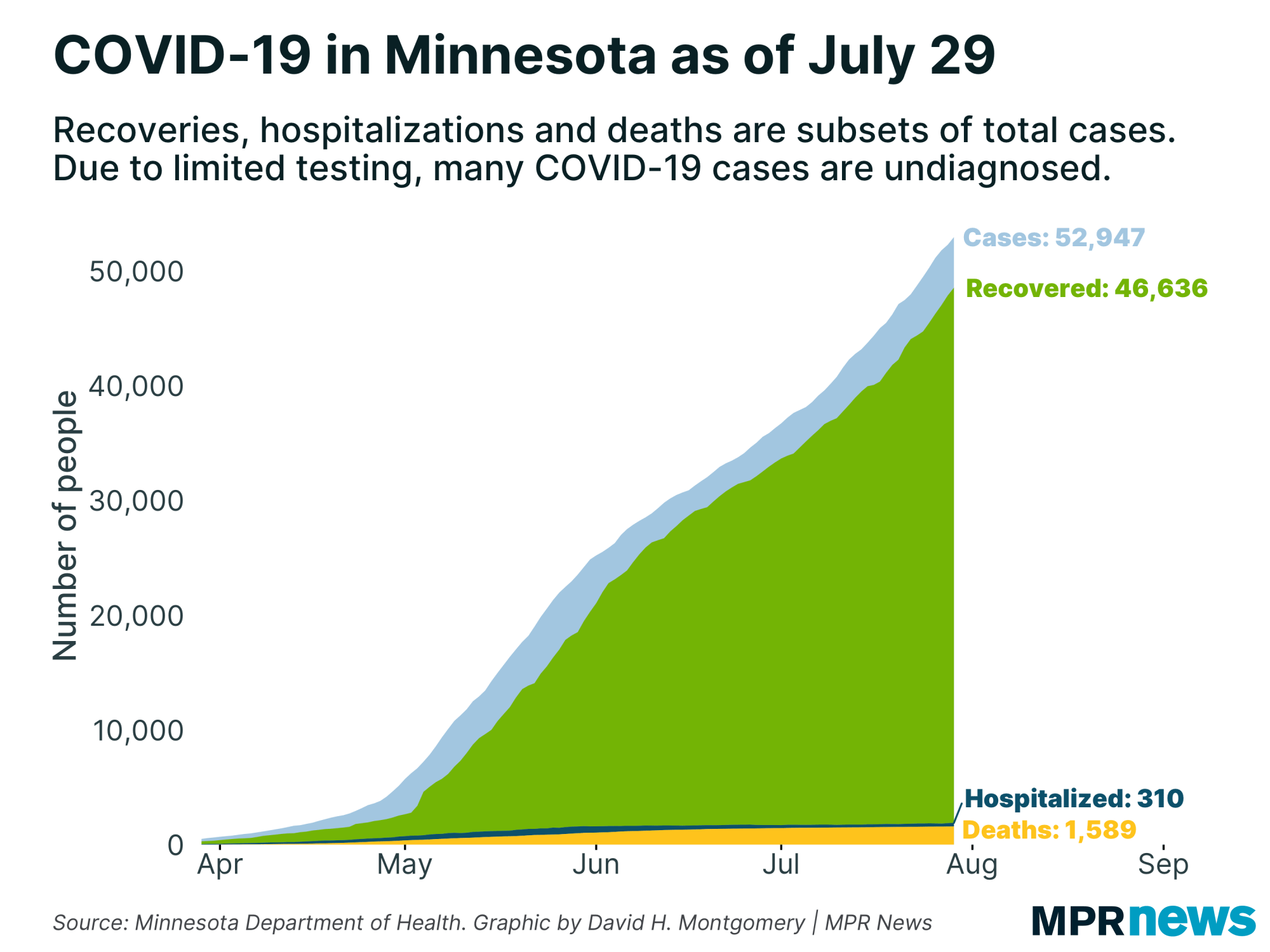 Ehresmann noted 83 new cases in long-term care facilities, a jump from the prior day — but most of the new infections were found in health care workers at those facilities, not residents. That’s especially worrisome because it indicates people are bringing in the disease and exposing vulnerable people.

While officials for months have gently admonished people to wear masks, socially distance and stay vigilant against the disease, Ehresmann Wednesday was particularly emphatic that in order for the disease to be checked, more Minnesotans needed to change their behavior.

Wednesday’s numbers come as Gov. Tim Walz announced plans to give away 4 million masks to businesses across the state for free to help comply with the mask mandate. During his meeting with business leaders at Liberty Packaging in Brooklyn Park on Wednesday, the DFL governor urged Minnesotans — even if they didn’t approve of his politics — to don masks in public.

"If we're going to ask them to ask their customers and Minnesotans to wear a mask, we want to make sure our goal is to make sure people have the masks to keep themselves and their neighbors safe,” Walz said. “And when we go into a business we don't want somebody to be turned away from a purchase because they don't have a mask. We want to make sure it's easy to get them one."

Walz and Minnesota health officials say the state needs 90 percent or better compliance to curb the spread of the virus. The governor said the mask mandate would help the state avoid closing some businesses, as has happened in other states experiencing upticks in COVID-19 cases.

“Three of our 5 dial-back criteria are in the red as of this time right on that edge,” said Walz. “But at this point in time we've asked the businesses and I think they've stepped up that give us an opportunity of this mask mandate and we think this could give us a position where we don't have to roll backwards.” 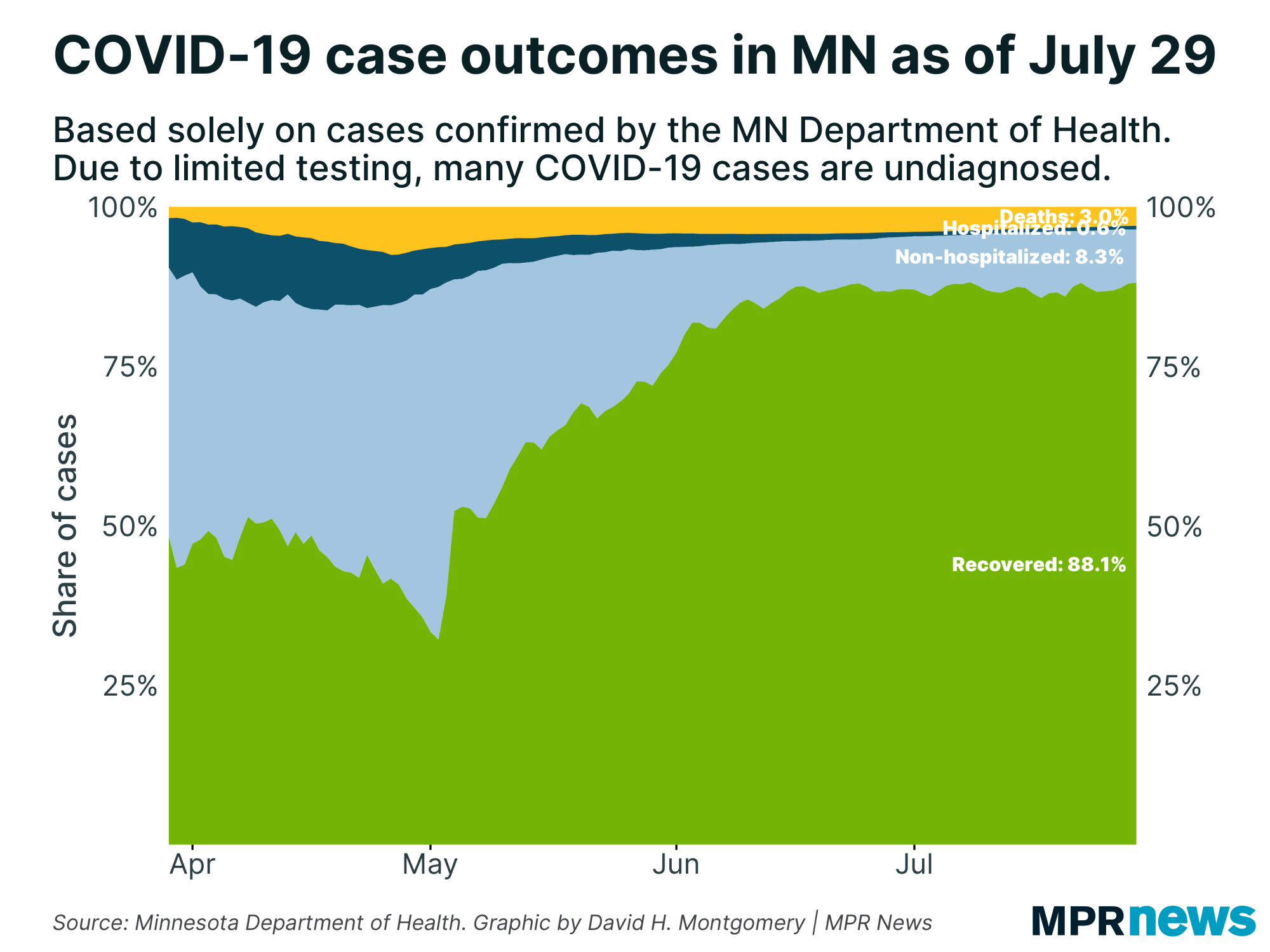 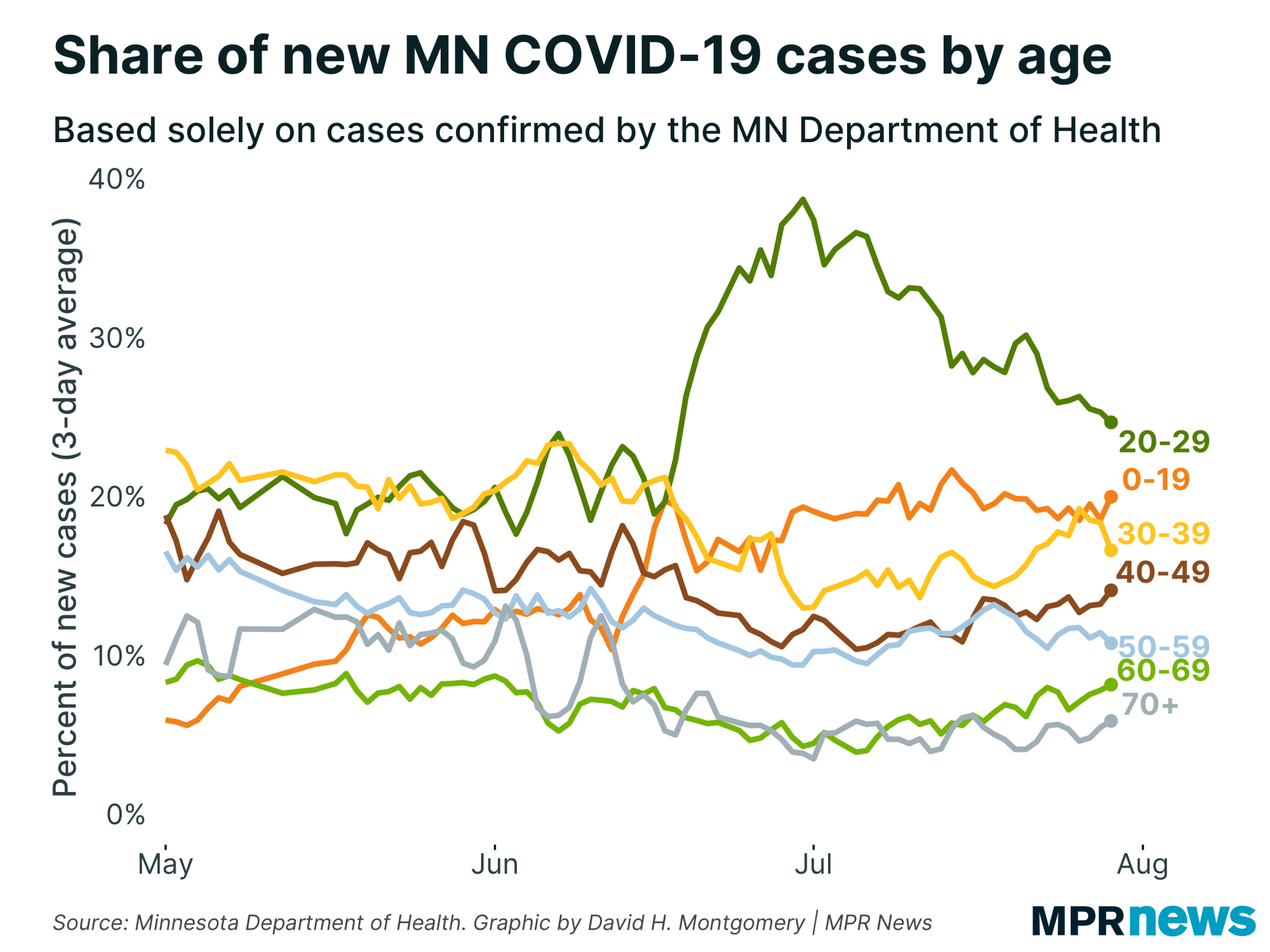 Minnesotans in their 20s now make up the age group with the most confirmed cases in the pandemic, with more than 12,500. The median age of Minnesotans infected has been trending down in recent weeks and is now 36 years old.

Investigators continue to see rising cases with bars and restaurants at their center and are looking at outbreaks in 28 establishments, Ehresmann said.

Regionally, newly reported cases have been driven recently by the Twin Cities and its suburbs, but it’s present in all parts of the state, including the north, which had largely avoided the outbreak until recently. 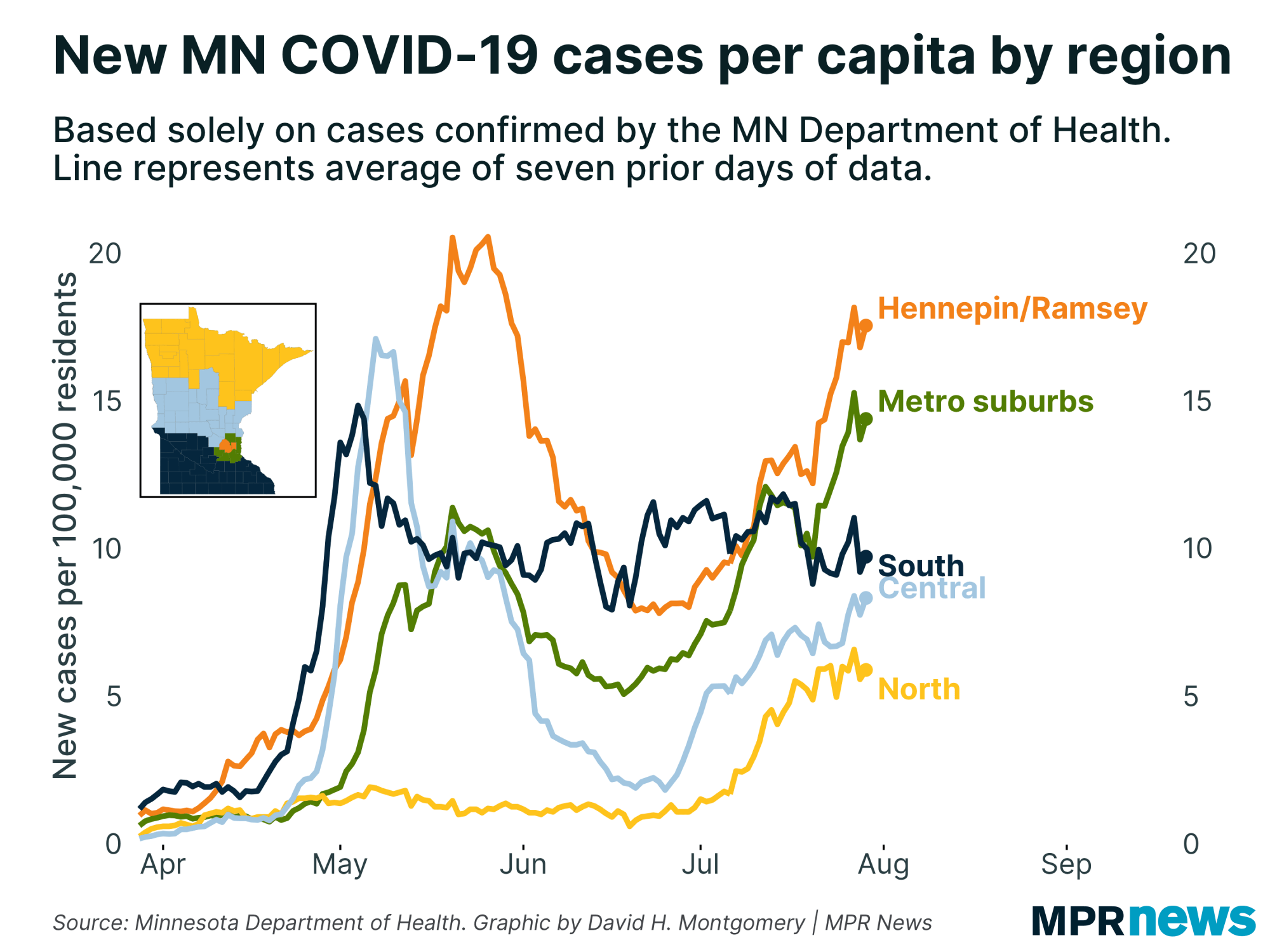 New cases have also been rising in northern Minnesota. Cases in Beltrami County, home to Bemidji, have more than doubled in the past week and a half, from 53 to 122 on Friday. That jumped again to 164 as of Wednesday.

Ehresmann last week said the Beltrami case increase is tied to spread from athletic events and other public gatherings.

All Minnesota counties now have confirmed cases of COVID-19. 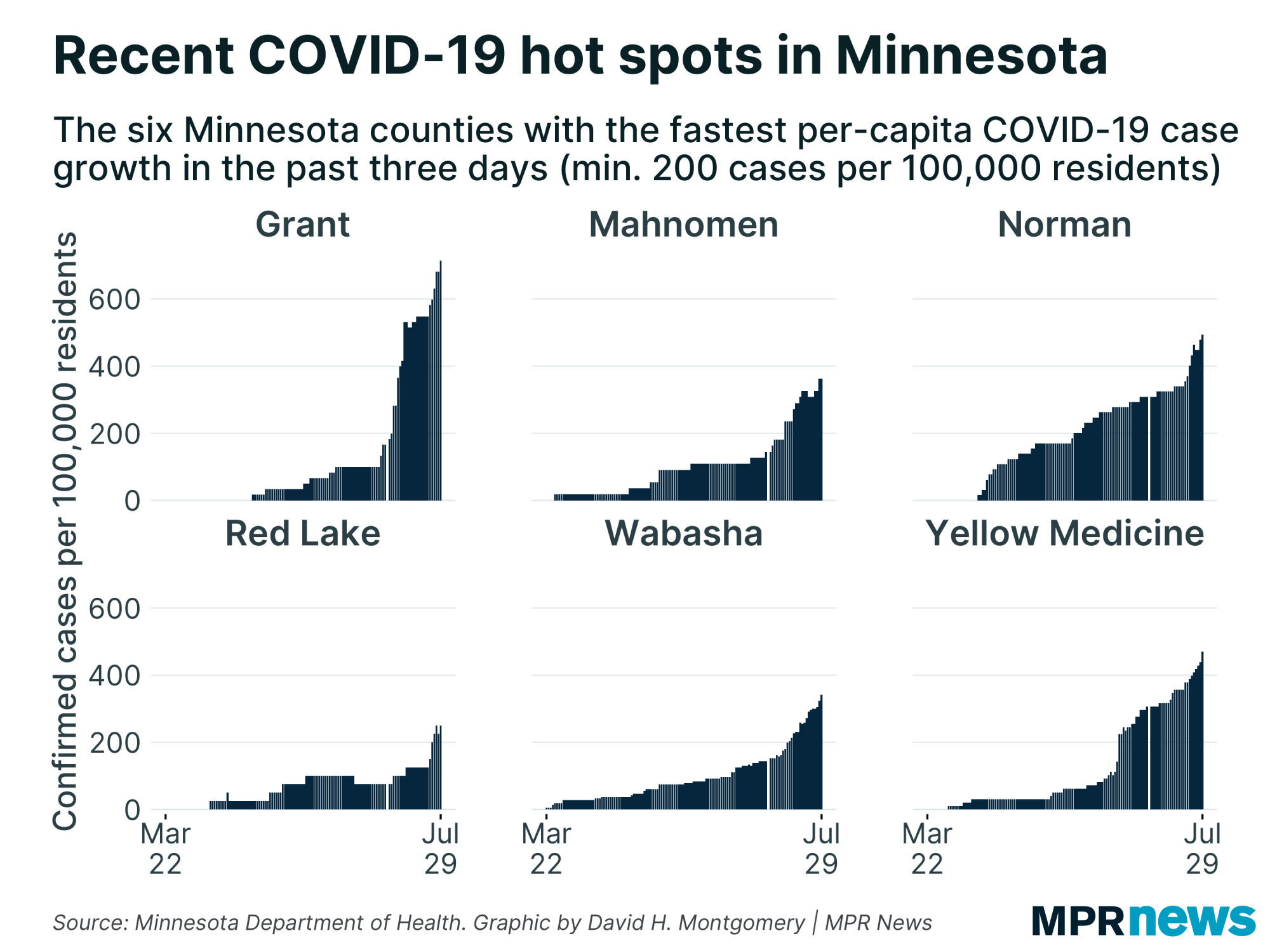 Gov. Tim Walz is expected to announce a plan Thursday on bringing kids back into school buildings. The state Education Department has told school leaders to pretty much prepare for anything, including some combination of in-school and online instruction.

“Nobody wants kids in school more than me,” and state officials have been working for months on how to do that safely, Walz, a former high school teacher, said recently. 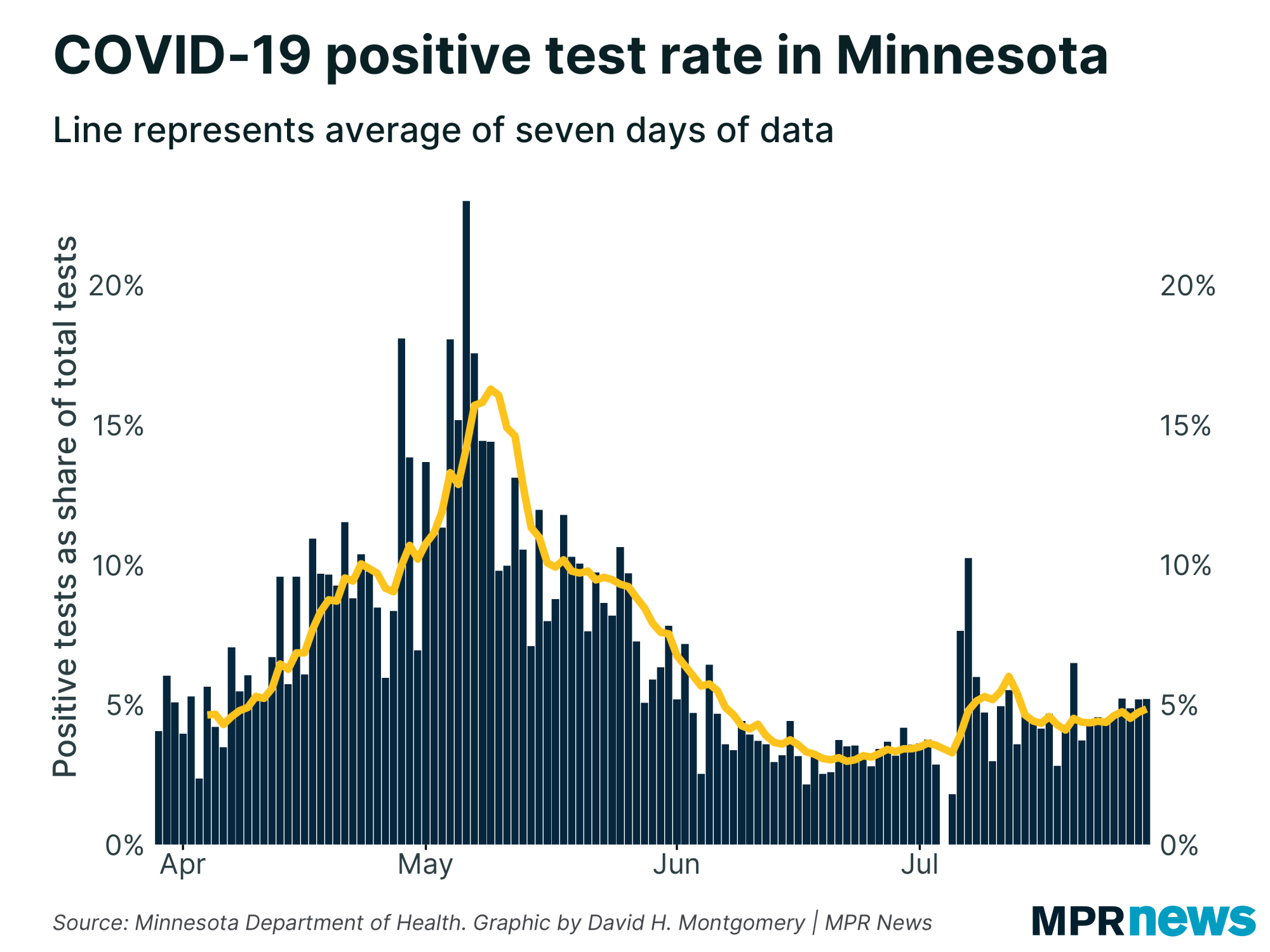 On Tuesday night, Minneapolis Public Schools said it would start out the school year virtually.

Officials say they’ll create a better distance learning experience for families than during the time schools closed buildings last spring, and that the decision on when to return to school will depend on how COVID-19 evolves.

To read the original articles and see more COVID-19 reporting, follow this link to the MPR News website:  https://www.mprnews.org/story/2020/07/29/latest-on-covid19-in-mn