Latest on COVID-19 in MN: Case count well over 51K Health officials reported more than 870 new confirmed COVID-19 cases on Sunday as the percentage of positive tests climbed back above 5 percent.

That percentage had stayed below 5 percent for nearly a week — but Sunday's report showed both an increase in the daily number of new, confirmed cases and a decrease in the number of completed tests, compared to Saturday.

While the overall statewide total stands at 51,153 cases, officials say limits on testing mean the actual number of cases is much higher.

The newest numbers came a day after Gov. Tim Walz’s statewide mask-wearing order took effect, intended as a way to stem the spread of COVID-19 and put the state on a path back to normalcy.

Kris Ehresmann, the state’s infectious disease director, on Friday said it would be several weeks before officials could assess the impact of Minnesota's new mask mandate. 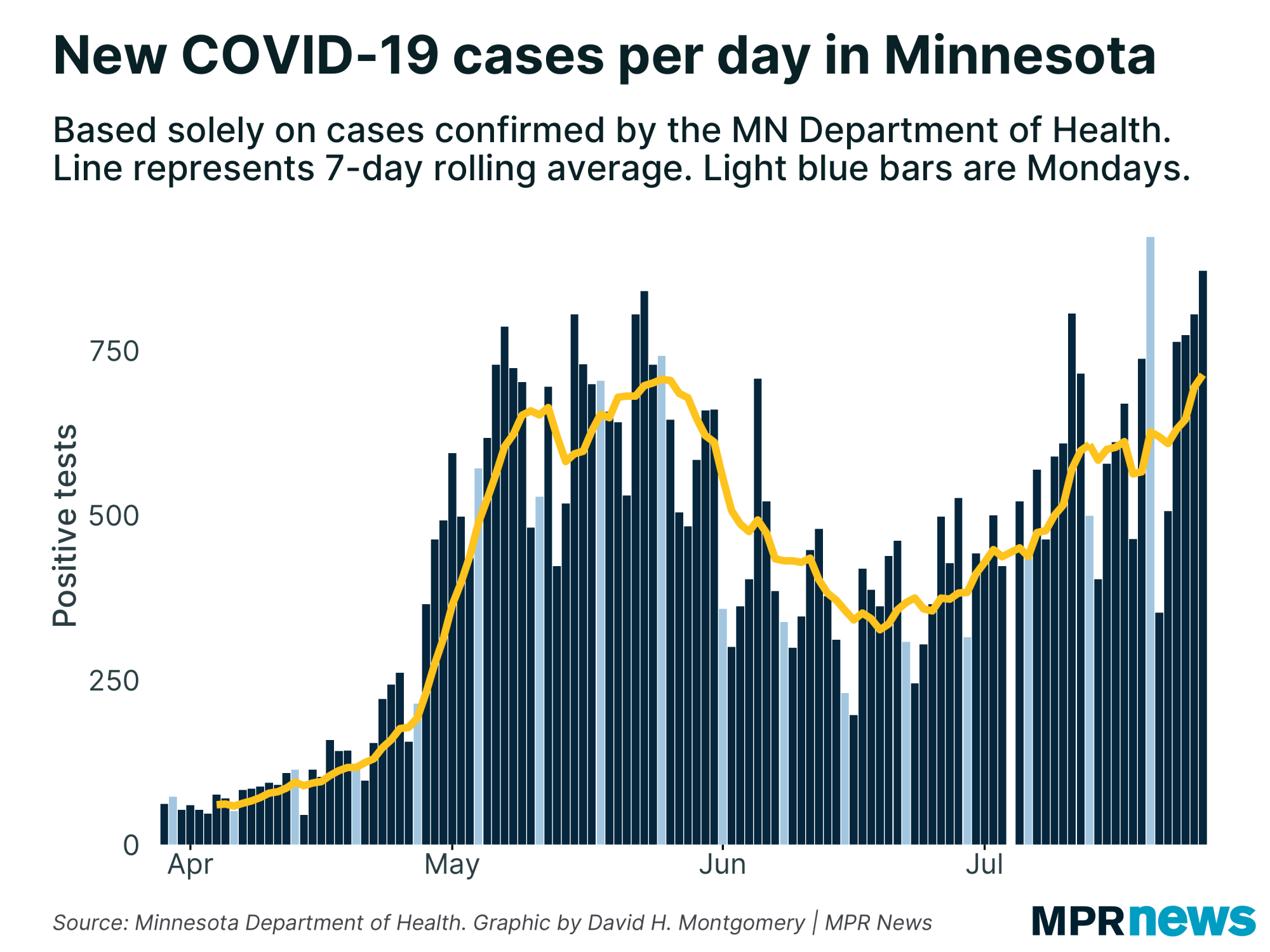 The governor is expected to announce a plan Thursday on bringing kids back into school buildings. The state Education Department has told school leaders to pretty much prepare for anything, including some combination of in-school and online instruction. 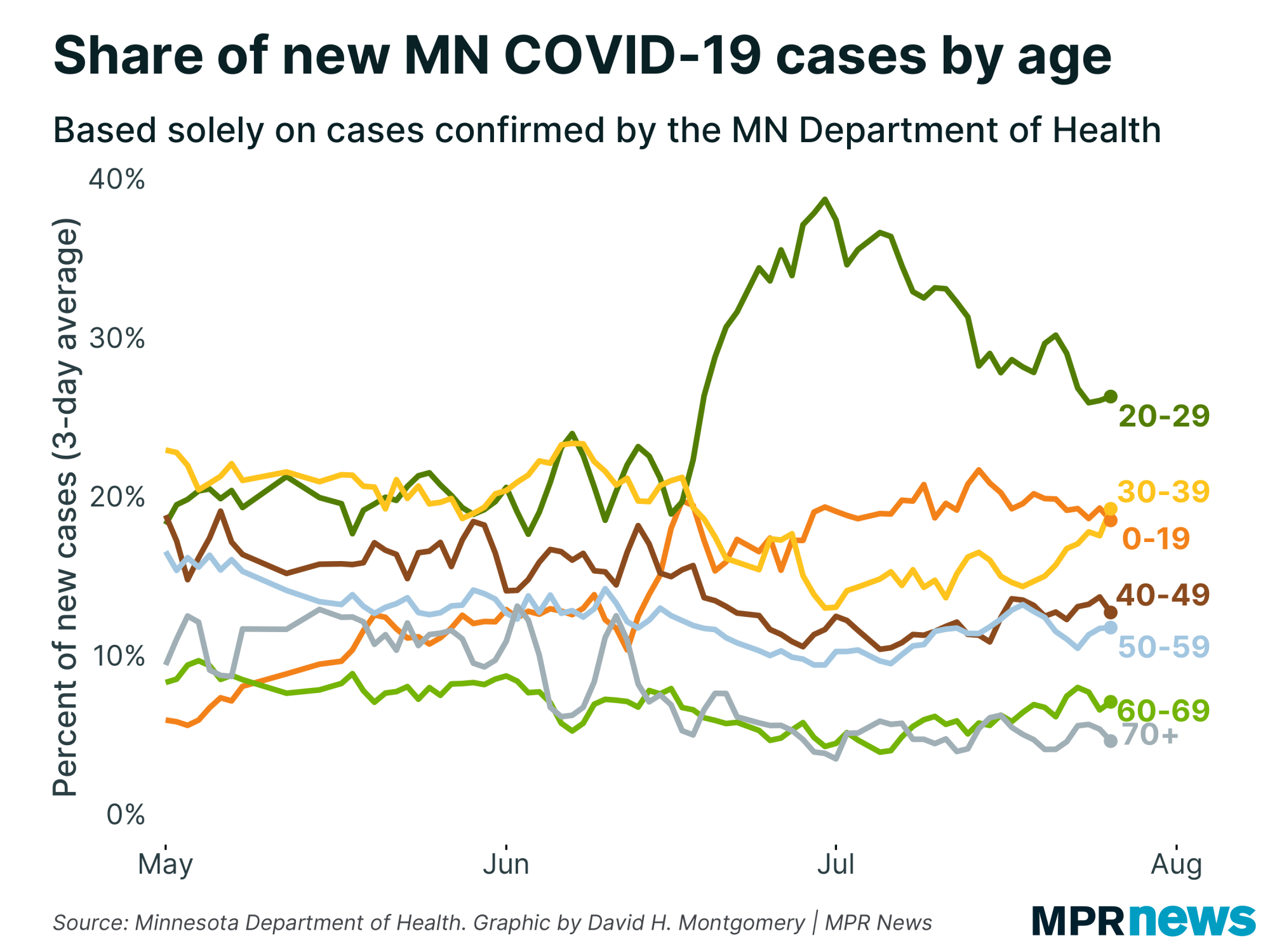 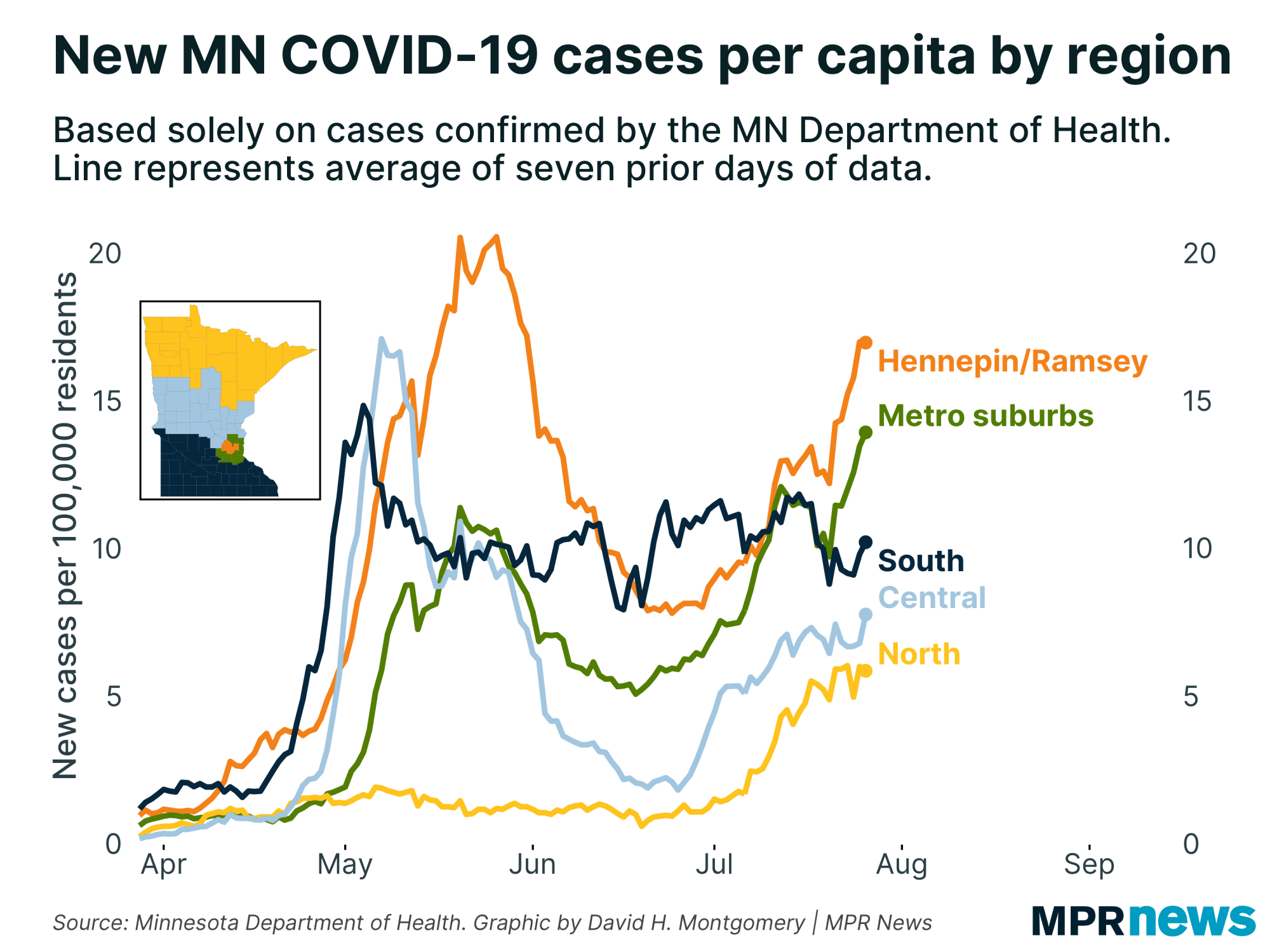 Cases in Beltrami County, home to Bemidji, have more than doubled in the past week and a half, from 53 to 122 on Friday. That jumped again to 151 on Sunday.

That includes Mower County in southeastern Minnesota, where there were 1,038 confirmed cases as of Sunday. Mower County is home to Hormel Foods and Quality Pork Processors. Both have been partnering with Mayo Clinic to ramp up employee testing. 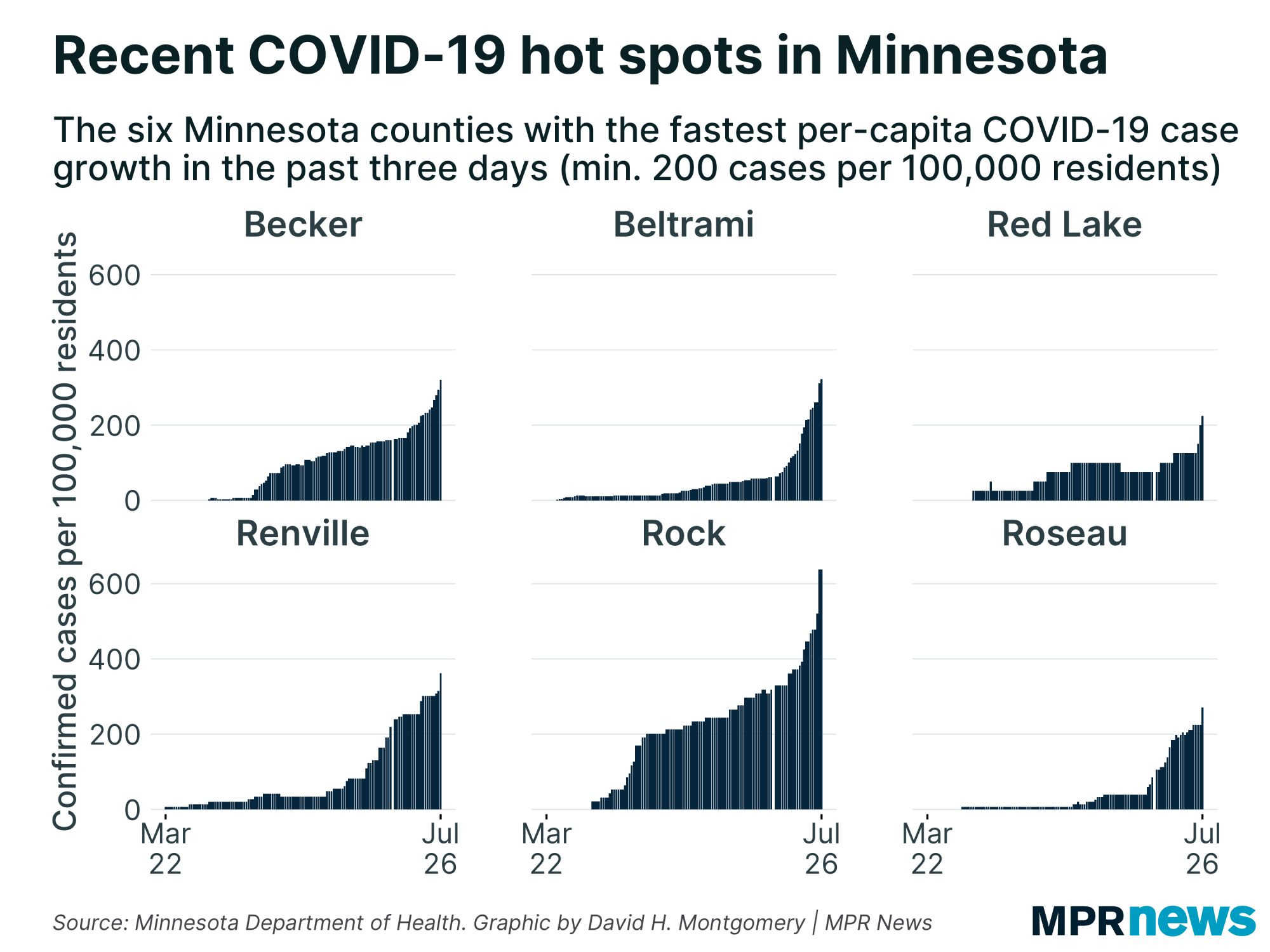 Nobles, in southwestern Minnesota, reported 1,727 confirmed cases as of Sunday, with six deaths. About 1 in 13 people now have tested positive for COVID-19 in the county since the pandemic began, although the count of new cases has slowed considerably in recent weeks.

As of Sunday, the Health Department reported 644 people have now tested positive. The county had confirmed three COVID-19 cases in late April.

Cases have also climbed noticeably in Lyon County (401 cases) around a turkey processor in Marshall.

The teachers unions also are asking for policy changes to support the education of students of color. Walz is expected to make an announcement on schools Thursday.

Since mid-March, Metro Transit has required riders to board from the back of the bus to help protect drivers from possible virus contact. Front-door boarding and cash-fare collections will resume Saturday, said spokesperson Howie Padilla.

COVID-19 brings surge of visitors — and some messes — to BWCA: The BWCA and the surrounding Superior National Forest in far northern Minnesota are seeing a surge in visitors this summer. That's good news for the outfitters that rent equipment and lead trips into the area — but some of those campers are wreaking havoc on the pristine, protected region.

Aspiring lawyers balk at Minnesota bar exam over COVID-19 fears: Hundreds of aspiring lawyers are planning to take the Minnesota State Bar Exam this week despite concerns about COVID-19. The Minnesota Supreme Court denied a petition from nearly five dozen recent law school graduates who’d sought to have the test waived this year.

To read the original articles and see more COVID-19 reporting, follow this link to the MPR News website.  https://www.mprnews.org/story/2020/07/27/latest-on-covid19-in-mn