Sandbar parties like this one last weekend on Pelican Lake in Otter Tail County are growing this year, leading to noise and trespassing complaints.  Photo: Dan Gunderson | MPR News

They'd anchored on a sandbar, out a couple hundred feet from the shore.

Hovland has worked this Otter Tail County lake — 20 minutes south of Detroit Lakes — for a dozen years as a water patrol officer. He estimated about 100 boats anchored on the sandbar, with a few hundred people playing in the water, listening to music and visiting.

"The only way you could truly count it probably would be with a drone because it's a pretty big area," he said, as he slowly worked his way around the boat jam.

"For me, I see it as a safety issue, just because if something were to happen, you can't get in there. There's just too many people. It's dangerous to even go in there to try to enforce stuff, let alone if there was an accident."

An increase in boat traffic and gatherings like this on popular lakes has led to an increase in complaints about noise, trespassing on private beaches and boats blocking docks.

It’s another ripple effect of COVID-19, showing up here on the lakes of Otter Tail County. With vacations canceled and long-distance travel at a minimum, people are staying close to home — and more boats on the water has meant more complaints about noise and trespassing on private beaches. 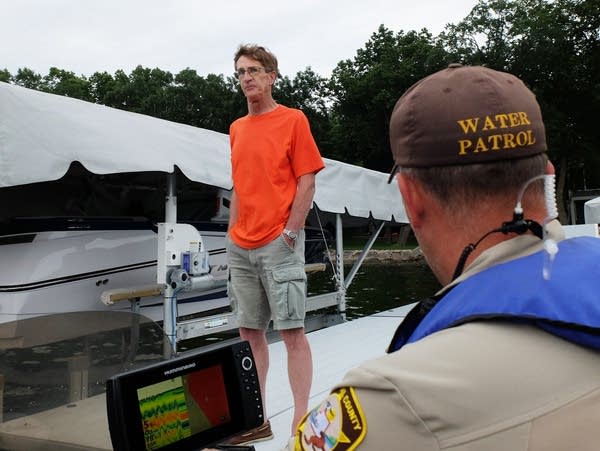 Tom Smart lives on Pelican Lake near a sandbar where more than 100 boats gather on weekends. He's complained to the sheriff about loud music that often continues late into the evening.   Photo: Dan Gunderson | MPR News

Complaints this summer have come in at about three times the normal rate for the season, Sheriff Barry Fitzgibbons said.

“This summer with COVID-19 and a lot of people either being out of work or working remotely, we’ve seen an increase in people using the lakes, and it’s generated more complaints than we’ve seen in the past,” said Fitzgibbons.

And it’s not just Otter Tail County. Department of Natural Resources spokesperson Joe Albert said conservation officers across the state report “observing a marked increase in the number of people recreating on the water,” and officers “are responding to more water-related complaints and observing more violations.”

Conservation officers have also responded to a higher than usual number of water emergencies. The agency didn’t have comparable year-over-year statistics available.

Some Minnesota counties have surface water ordinances that regulate what people can do on the water. Otter Tail County does not have such an ordinance, so in many cases water patrol officers can only request that people turn down their music, or politely ask that they move away from docks when they block access for lakeshore property owners. 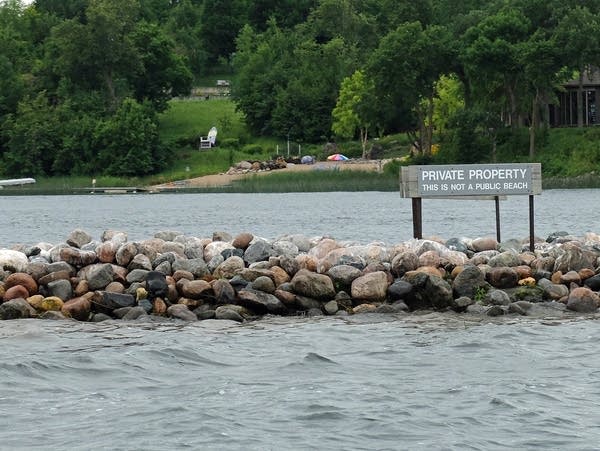 A property owner put up this sign on a point near a popular sandbar between Pelican and Fish lakes in Otter Tail County. Increased boat traffic is leading to more complaints of trespassing.
Photo: Dan Gunderson | MPR News

After a few of those interactions with water patrol officers, some people simply ignore the requests.

“What we can do as law enforcement is minimal unless we have something to back it up,” said Hovland, who’s seen situations this summer in which so many boats have congregated that officers couldn’t get close to an offending boat to ask them to turn down loud music.

‘We want them to enjoy the lakes’

The Otter Tail County commission recently decided to study the idea of enacting a surface water ordinance, after the increase in complaints this summer.

But Fitzgibbons isn’t sure he wants restrictions on people who are out on the lakes.

"The water's public and everybody's entitled to use it and we encourage it. Otter Tail County has over 1,000 lakes — and that's why people come here," he said. “We want them to enjoy the lakes and come enjoy the businesses in the county.”

But the sheriff said lake property owners also have legitimate complaints about trespassing, noise and traffic that need to be addressed.

Some of those complaints have come from Tom Smart, who owns a cabin on Pelican Lake that’s been in his family since 1955. It shares the lakeshore with traditional, small cabins and palatial multi-million dollar homes.

Smart is not happy, standing there on the end of his dock, surveying the flotilla just offshore.

"I understand it's public waters, but it's gotten to the point where there's loud music all of the time, bad language, I don't like it at all," he said.

The party here is largest and noisiest on weekends and holidays. Smart said that, on the Fourth of July, so many boats had clustered near his dock that he couldn't move his own boat. 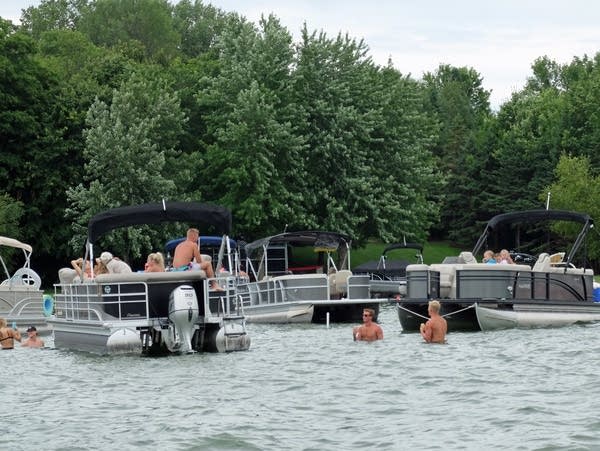 Regular parties on this sandbar aren’t new, but county officials said they’ve been growing in size for the past decade. Hovland thinks it has to do with more people owning large pontoon boats, and the growing popularity of sea legs — a self-contained boat lift that allows boats to lift themselves out of the shallow water around the sandbar and have a stable platform.

Smart said this summer is the most congested and loudest he’s experienced.

"A lot of times we want to sit outside and have dinner at six o'clock at night and now the music's blaring out here,” he said. “Somehow, we've got to get a little control over what's going on out here."

Hovland said he thinks the crowd is a mix of people who live on the lake and those who bring their boat in for the day.

On another sandbar not far away, Mona Radermacher hung out with three generations of her family. They’ve been anchoring in the same area on weekends for 30 years, and she doesn’t want to see restrictions that might limit how they use the lake.

“We have a cabin on the lake, but it’s kind of weedy, not great for swimming,” she said. So instead, they come here on a Saturday afternoon, anchoring a few feet away from a private beach, in shallow water where her grandchildren can safely splash. 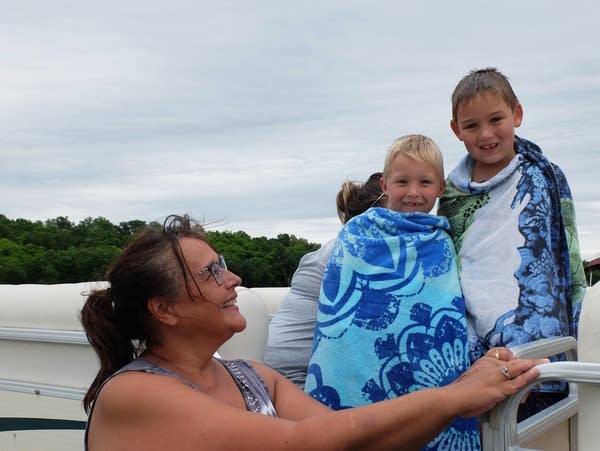 Mona Radermacher enjoys bringing her grandchildren, Gavin and Blaine, to a sandbar where they can play in shallow water. It's more fun than the weedy shoreline near their cabin.
Photo: Dan Gunderson | MPR News

"It's nice and sandy, so they can just play, that's why we like it," she said. "We've had a lot of fun, when our kids were little and now our grandkids get to enjoy it, so it would stink if we couldn't do it."

Radermacher understands why some property owners might be upset. She’s seen people leave garbage on beaches, or let their dogs use the nearby private beach for a bathroom break. On summer holidays they stay away, because she said the crowd behavior “isn’t appropriate for kids.”

"I think as long as people are being respectful and having fun, I think that's okay,” she said. “But I think sometimes people cross the respect line pretty easy."

The Otter Tail County board of commissioners’ public works committee is planning to review other surface water ordinances around the state over the next few months, in its efforts to perform what one commissioner called a “balancing act” — protecting lakeshore property owners’ rights, while not restricting access to public waters.

“I think the goal first is identify the issues and just try to work on them individually and see if we can't resolve them before we have more and more restrictions,” said Sheriff Fitzgibbons.

“It’s about being courteous and respectful.”

To read the original article and see related  stories, follow this link to the MPR News website.  https://www.mprnews.org/story/2020/07/23/another-covid19-ripple-effect-crowded-lakes-cause-conflict
Outdoors