COVID-19 brings surge of visitors — and some messes — to BWCA The U.S. Forest Service's Superior National Forest division posted this photo to Facebook on Monday as part of a series of photos illustrating what not to do in the Boundary Waters Canoe Area Wilderness. It highlights an incident on the BWCA's West Pike Lake in which a tree was cut down. It is illegal to damage any living plant in the Boundary Waters wilderness area, or to cut live trees for firewood.  Photo: Courtesy of the U.S. Forest Service

He's seen a lot. But he wasn't prepared for what he saw at a campsite on Big Lake earlier this summer, just outside the Boundary Waters Canoe Area Wilderness.

"[There were] beer cans in the water, a live tree chopped down and hacked into pieces, toilet paper strewn around,” he said. “A friend of mine and her sons have camped their historically in the past. It was one of their favorite campsites. They were literally in tears when they saw it."

Eisenmenger doesn't think the kind of damage he saw was caused by negligence, or someone making an honest mistake.

"I just think it's a group of people coming that don't usually use that type of area, and they just don't have any respect for it," he said.

The BWCA and the surrounding Superior National Forest in far northern Minnesota are seeing a surge in visitors this summer. With kids' activities canceled and other trips on hold, people are flocking to the area for the kinds of outdoor activities that naturally allow for social distancing.

That's good news for the outfitters that rent equipment and lead trips into the area — but some of those campers are wreaking havoc on the pristine, protected region.

The U.S. Forest Service is seeing a spike in visitors across its lands, including the Boundary Waters, said Trent Wickman, spokesperson for the Forest Service’s Superior National Forest.

The agency doesn’t have data yet on visitation numbers this summer, but Wickman said many of the visitors are new to these woods — and to outdoors activities like hiking, camping and canoeing. That’s a great thing, Wickman said.

"We're happy to have people come and experience the outdoors — potentially have some more folks interested in continuing this, even after the pandemic," he said. 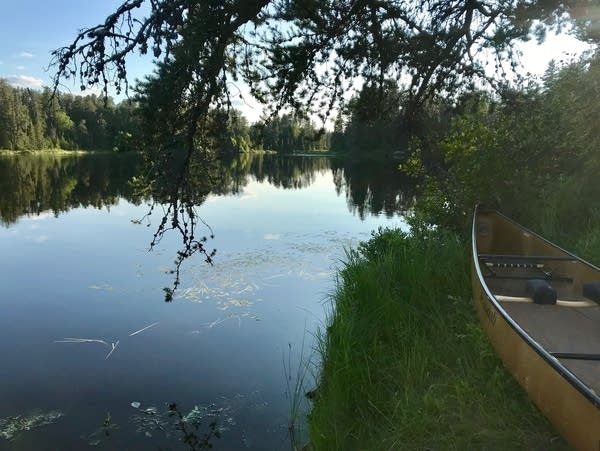 But Wickman said that the increase in visitors has brought along with it more problems: "Garbage left at sites, burning garbage, fish guts and that kind of stuff, not being taken care of. Having campfires not in the grate."

The BWCA is wilderness — a place where visitors bring out what they take in, store food where bears can't reach it and build fires only in designated grates. Ideally, they leave no trace.

But all this month, the Forest Service has been posting photos on Facebook of trees cut down, trash on trails and leftover bait containers abandoned a campsites. It’s prompted a series of posts illustrating what not to do while in the Boundary Waters.

Part of the issue, several outfitters say, is that, because of the coronavirus pandemic, the process for getting permission to enter the protected area has changed. Visitors still must register for permits to enter the area, but can now print them out at home.

Under normal circumstances, campers or canoeists would pick up their reserved permit at a ranger station or an outfitter, where they would be required to watch a video and pass a quiz on BWCA rules.

Because of the change, outfitters have tried to focus more on educating visitors this summer, especially those with less experience. Clare Shirley, who runs Sawbill Outfitters outside Tofte, said that there are always a few bad actors who may trash a campsite.

"But I really believe that those are few and far between,” she said, “and that a lot of this just stems from people not understanding what a wilderness area is, and what it really means to leave no trace, and not being prepared when they go out for how to pack everything back out again."

It's been a roller coaster of a summer for Shirley and other outfitters. The Boundary Waters was closed to overnight canoe trips in early May because of the pandemic. But as soon as restrictions were lifted, canoeists started coming — in droves.

"It is the busiest season that I could ever, ever even imagined," Shirley said.

Andy McDonnell, co-owner of Tuscarora Lodge and Outfitters, 50 miles down the Gunflint Trail out of Grand Marais, has also spent extra time educating families and first-time visitors on wilderness etiquette.

He's focused a lot on how to properly store food in bear country. In June, several black bears raided campsites on lakes near the end of the Gunflint Trail.

"They weren't being terribly aggressive, but they were scaring people away, they were getting their food, they were coming into people's campsites when they were out fishing, ripping up the campsite,” McDonnell said. “They got a lot of food packs."

He said a lot of that stemmed from people not knowing how to deal with trash — like extra food.

"And instead of forcing it down or packing it out, they would dump it behind the campsite,” McDonnell said. “And you get one group that does that, and then you get another group that does that, and get another group that does that, and all of a sudden … you've got a bear realizing that there's this awesome food source. Pretty soon, he's going to connect the dots that is coming from the people. So he's going to go straight to the source."On Thursday, the Forest Service issued an order requiring, not just recommending, that campers on five lakes — Alpine, Jasper, Seagull, Red Rock, and Rog — in the Superior National Forest’s Gunflint District hang food properly from trees, or use bear-proof containers.

The Forest Service is encouraging new visitors to the Boundary Waters to read up, prepare well, talk to people who have visited the area before, and plan to pack out what they bring in.

“Because, remember,” Wickman said. “Somebody else is going to be coming behind you. And you want to leave it better than you found it. It's a bummer to show up to a site and have some garbage there. You want to leave it nice for whoever else. The use is very high, so there's going to be a lot of people using these sites all summer long.”

And if you haven’t gotten your permit yet, he said, do it soon — available slots are running out quickly.

To read the original article and see related reporting, follow this link to the MP News website.  https://www.mprnews.org/story/2020/07/24/covid19-brings-surge-of-visitors-and-some-messes-to-bwca