The COVID-19 pandemic has created huge demand for free or reduced-cost food across the state as Minnesotans have lost jobs and children missed out on school lunches. Food shelves anticipate even more people will rely on them to get enough to eat.

On Tuesday, Biantu Sheriff looked over milk, macaroni and cheese and other items in a cardboard box she picked up outside of Gethsemane Lutheran Church in north Minneapolis.

“I have three kids and really need diaper, formula and wipes for them,” she said.

Sheriff is working fewer hours after the COVID-19 pandemic shuttered schools abruptly in March. Since then, like thousands of Minnesotans, it has been harder for her to make ends meet. 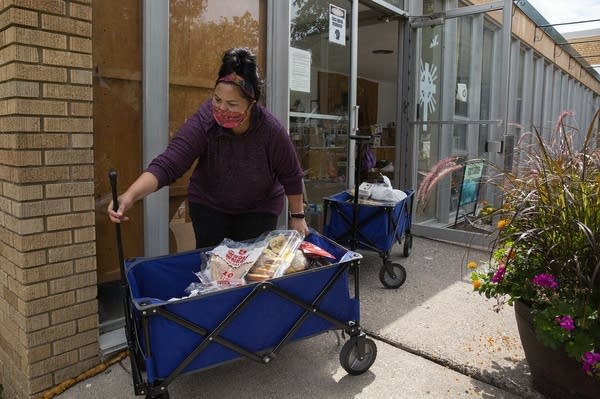 Malisamai Vue packs a cart with a box of food and personal hygiene products Tuesday at Gethsemane Lutheran Church in north Minneapolis. Vue and other volunteers with A Mother's Love often serve between 30 to 60 people per day.  Photo: Christine T. Nguyen | MPR News

Then, at the end of May, after Minneapolis police killed George Floyd, rioters damaged several businesses including the Cub Foods on Broadway Avenue, which had to close.

“It all of a sudden after the riot, it became a large food desert,” said Jamar Nelson of A Mother’s Love. The grassroots organization partnered with Gethsemane church to set up a makeshift food shelf in the Cub Foods parking lot for about six weeks before the grocery store reopened on Monday.

Gethsemane’s pastor, Jeff Nehrbass, is back in his own church parking lot serving more people than he ever has in his 13 years providing food and other essentials to the community. Nehrbass said prior to the coronavirus, his church served roughly 2,000 north side residents per month — that increased by roughly 5,000 people during the pandemic months.

City leaders say the need is growing by the minute at 36 food shelves run by churches and nonprofits. 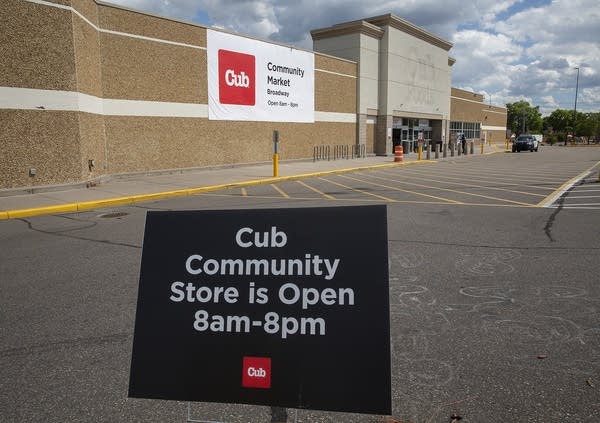 Donations are critical. The city of Minneapolis says it doesn’t have funds available to support food banks or food shelves.

The CARES Act money that since late March has provided an extra $600 in weekly unemployment checks. Should that aid go away as expected, locally run food shelves are anticipating an even greater need in the months ahead.

Second Harvest Heartland, a Twin Cities-based food bank, among one of the largest in the country, released a hunger report last month that anticipated unprecedented demand.

It said that before the onset of the COVID-19 pandemic, 1 in 11 Minnesotans struggled to afford food. By next month, it’s expected that 1 in 8 Minnesotans will face hunger.

It’s why Jamar Nelson encourages Minnesotans to keep giving what they can to local food shelves.

“This is going to be a long-time recovery, there is no makeshift fix that can do this, so community-wise, we need to continue to band together, and look out for those that are less fortunate of us, and do as much as we can to provide and remember that again, this is what community is about,” Nelson said.

“I have so many examples of that in the last six weeks it’s beautiful, it’s really heartwarming.” 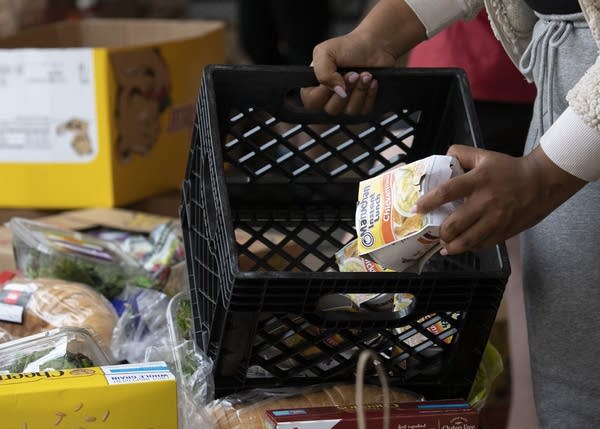 
To read the original story and see related articles, follow this link to the MPR News website.  https://www.mprnews.org/story/2020/07/22/minnesota-food-shelves-already-busy-brace-for-bigger-demand
News