A sign sits in the driveway of Johanna Shores Senior Living to warn visitors about restrictions due to COVID-19 in Arden Hills, Minn., on April 5. Gov. Tim Walz told reporters Tuesday that the state's “battle plan” to safeguard long-term care residents from COVID-19 is paying off.
Photo: Evan Frost | MPR News file

A state “battle plan” to safeguard Minnesotans living in long-term care facilities from COVID-19 is paying off with dramatic drops in the number of deaths and new cases the past two months, Gov. Tim Walz and state health leaders said Tuesday.

Deaths at those facilities drove much of the toll from the disease early on in the pandemic and still represent the majority of deaths to date. Still, officials said their interventions since mid-May led to a significant drop in daily deaths and outbreaks among the state’s most vulnerable populations.

“We are certainly not taking a victory lap,” Walz told reporters during an afternoon briefing. “The key here was controlling infections.”

Long-term, congregate care operations have concerned officials since the pandemic began, given the medical vulnerability of people living there. As deaths rose in late April and early May, officials scrambled to respond. 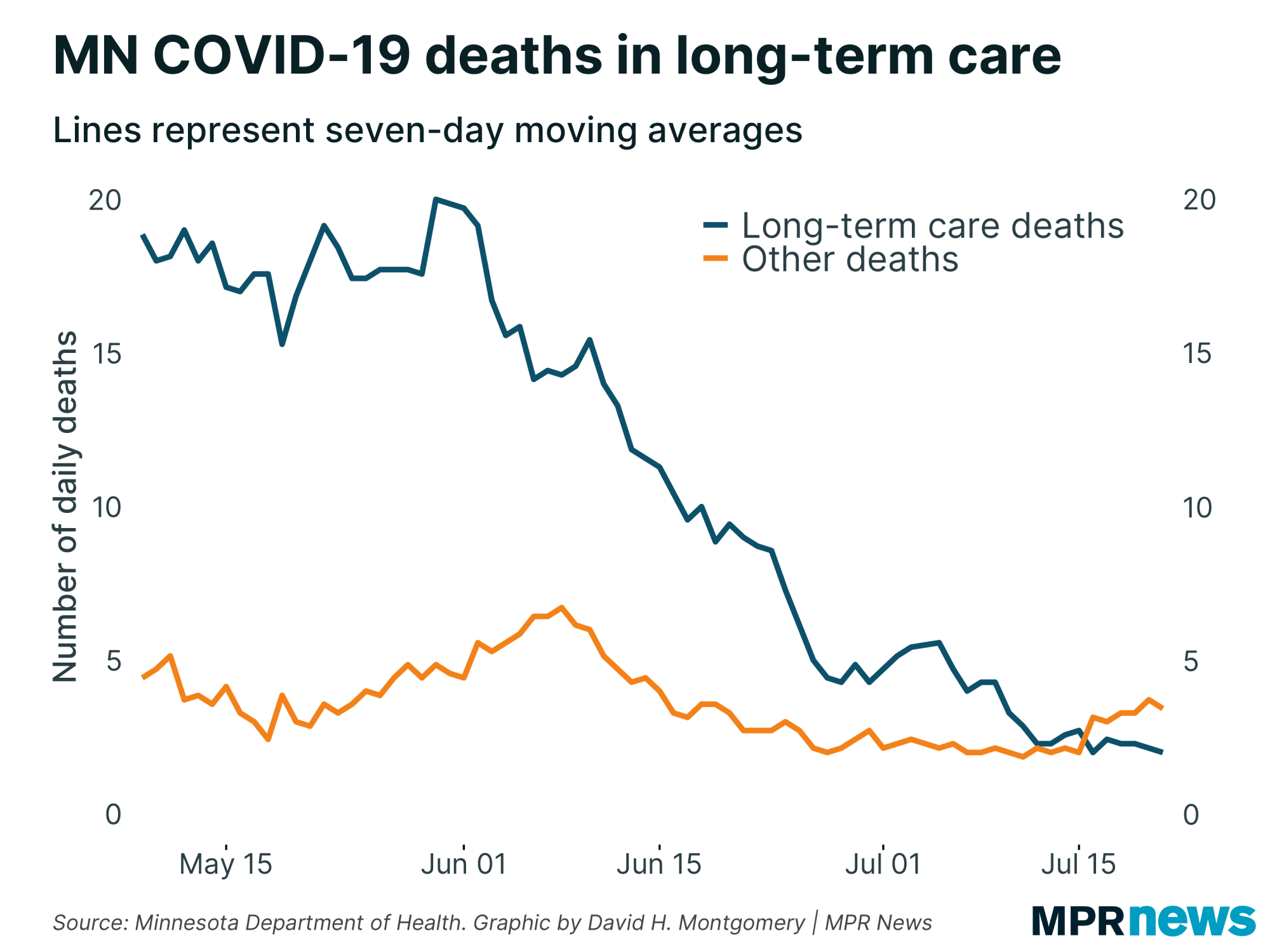 Those collective efforts worked, officials said Tuesday. For instance, in early May, there were 23 facilities reporting new cases each day; now it’s about six per day.

“The numbers are curving in the right direction,” Walz added.

Among the 1,548 deaths recorded in the pandemic as of Tuesday, about 77 percent had been living in long-term care facilities, nearly all had underlying health problems.

The governor fielded questions on a range of COVID-19 questions Tuesday beyond long-term care. Tops among those: Will kids return to their school buildings in the fall?

He’s expected to announce a plan by next Monday. The state Education Department has told school leaders to pretty much prepare for anything, including some combination of in-school and online instruction.

“Nobody wants kids in school more than me,” and state officials have been working for months on how to do that safely, said Walz, a former high school teacher.

If 90 to 95 percent of Minnesotans wore masks in indoor public spaces and maintained social distancing over the next month or so, the state could continue to reopen, daily life could move much closer to normalcy, Walz added.

Walz said Tuesday that a decision would come this week on a statewide mask order to help stem the spread of COVID-19.

He didn’t disclose the decision but indicated a statewide order was likely, noting that businesses support such a uniform move as do care providers and the state’s health leaders. Walz also recently expressed concern that Minnesotans were lagging on their mask-wearing.

If Minnesotans really want to get back to business and dial back other restrictions tied to COVID-19, “wear a mask,” he said Tuesday. 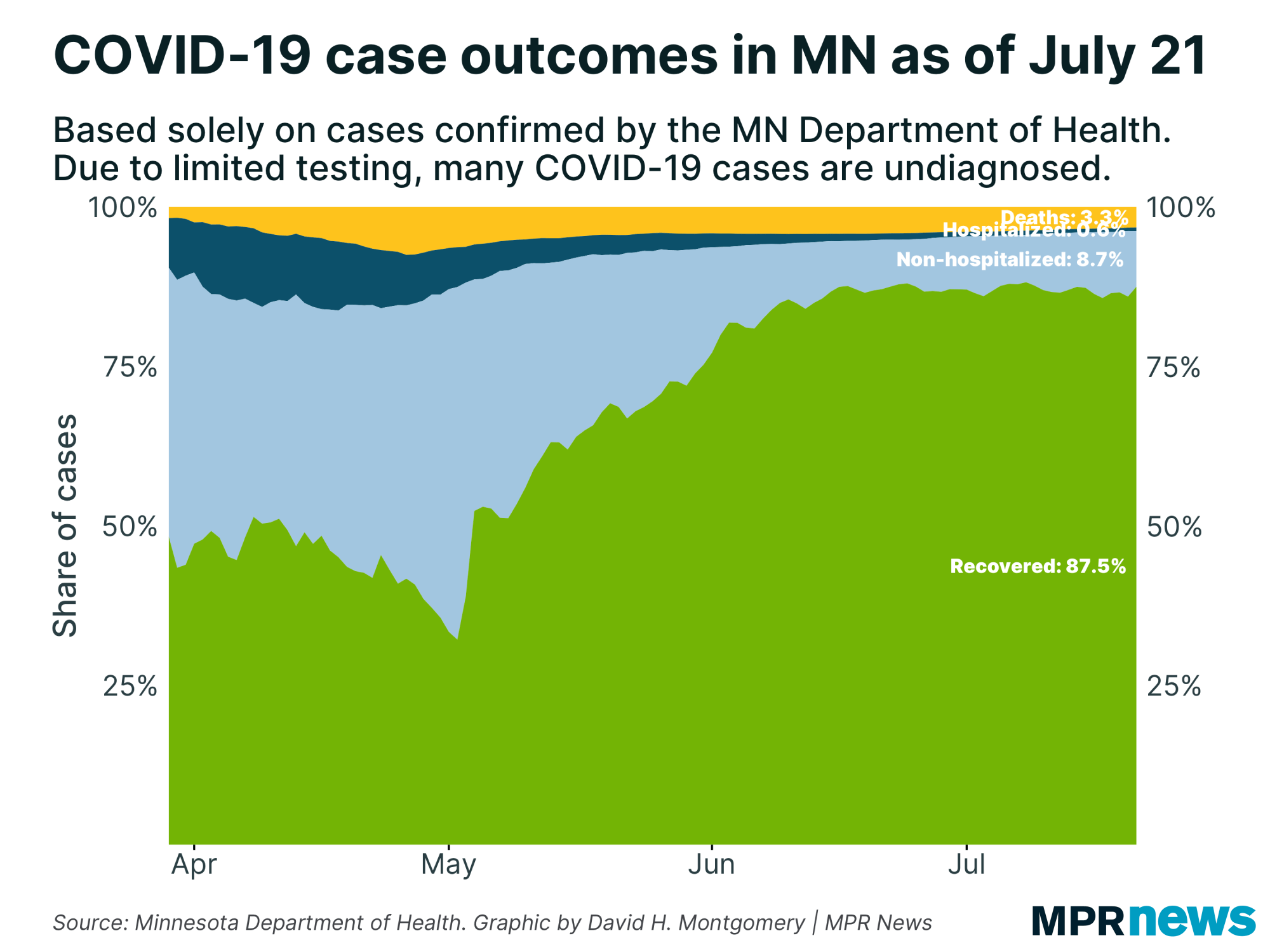 Republicans, including Senate Majority Leader Paul Gazelka, R-East Gull Lake, have said a statewide mandate would be a mistake.

On Friday morning, Walz told MPR News that he believes a mask mandate is the right thing to do to slow the spread of the coronavirus but was hoping to get legislative Republicans to buy in. More than half of U.S. states now require the use of masks or face coverings in public settings.

Walz’s remarks came hours after the state Health Department on Tuesday reported three more deaths from COVID-19 along with a significant rise in the number of people currently hospitalized.

Tuesday’s data showed a change in pattern from the past few weeks as current hospitalizations (266) jumped, although those needing intensive (112) care dipped slightly from Monday.

The number of people in the hospital but not needing intensive care (154) is the highest in about a month. State officials last week said they had expected to see hospitalizations start to climb again given the leap in new confirmed cases the past few weeks.

After posting a spike of more than 900 new cases on Monday, Tuesday came in at 352 cases. Officials urged the public to take the average of the two days — 636 cases — as the figure that best represents the actual case load climb for Minnesota over those two days. 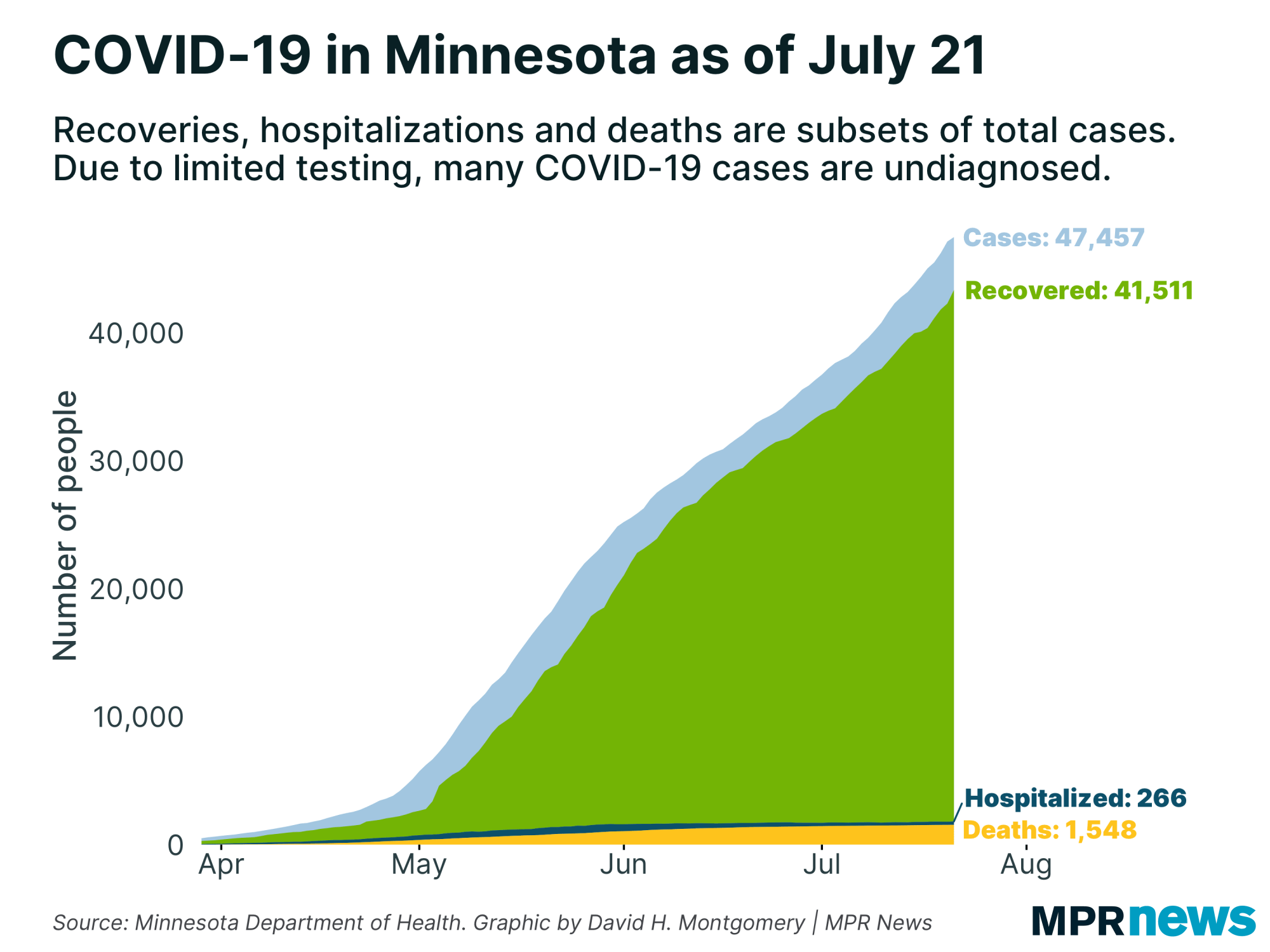 Of Minnesota’s 47,457 confirmed cases since the pandemic began, about 87 percent of those infected have recovered to the point they no longer need to be isolated.

Cases growing in many age brackets 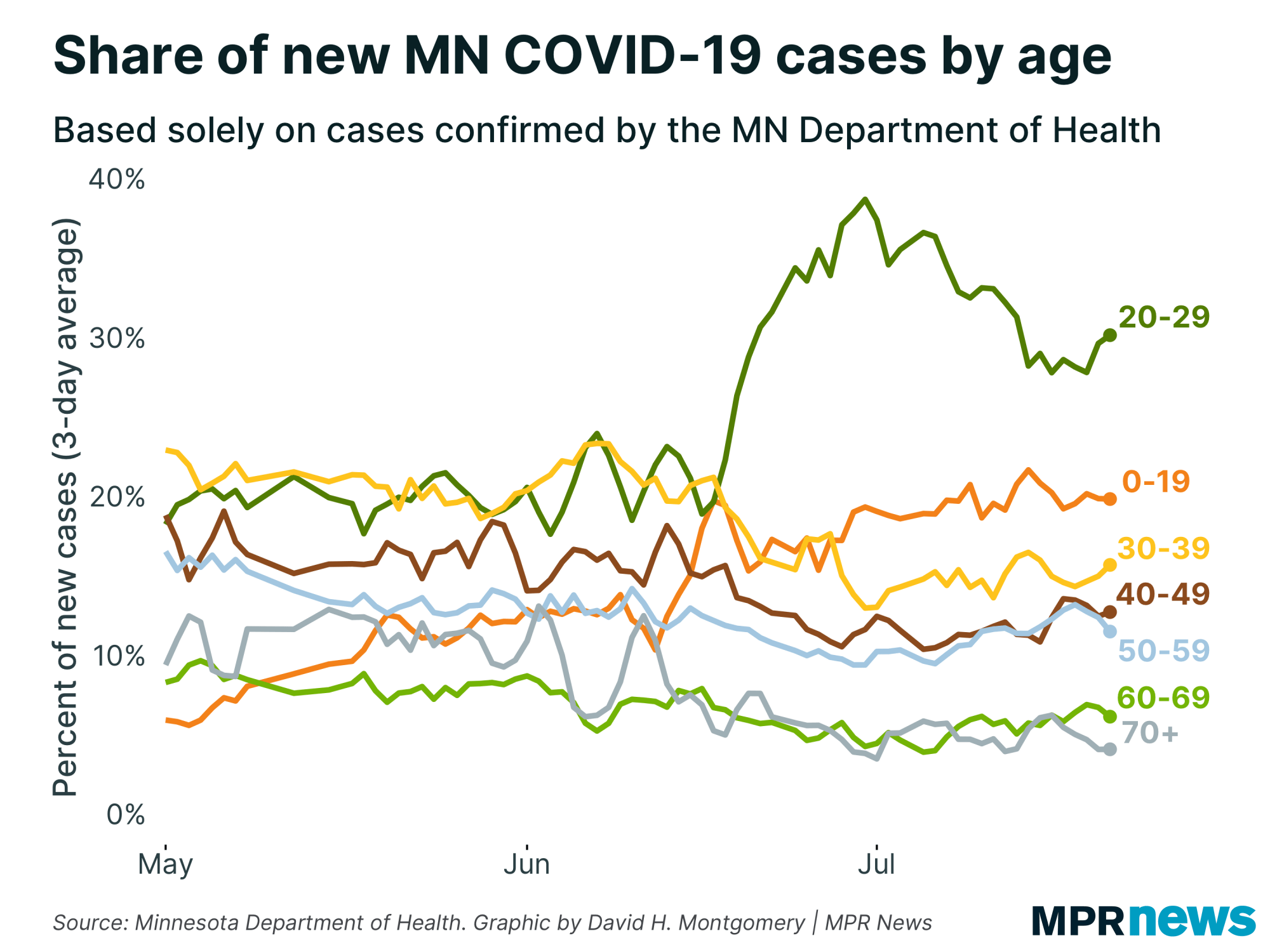 Minnesotans in their 20s now make up the age group with the most confirmed cases in the pandemic, with more than 11,000. The median age of Minnesotans infected has been trending down in recent weeks and is now 37 years old.

Health investigators, however, are starting to see more cases in many age brackets, including ages 30 through 59, as more people get together for family gatherings and summer fun without social distancing, Ehresmann said Monday.

New cases are also rising in northern Minnesota. Cases in Beltrami County, home to Bemidji, have nearly doubled in the past week, from 53 to 101. Ehresmann on Monday said the case increase is tied to spread from athletic events and other public gatherings.

State officials continue to work to get their arms around clusters of problems centered around bars and restaurants. 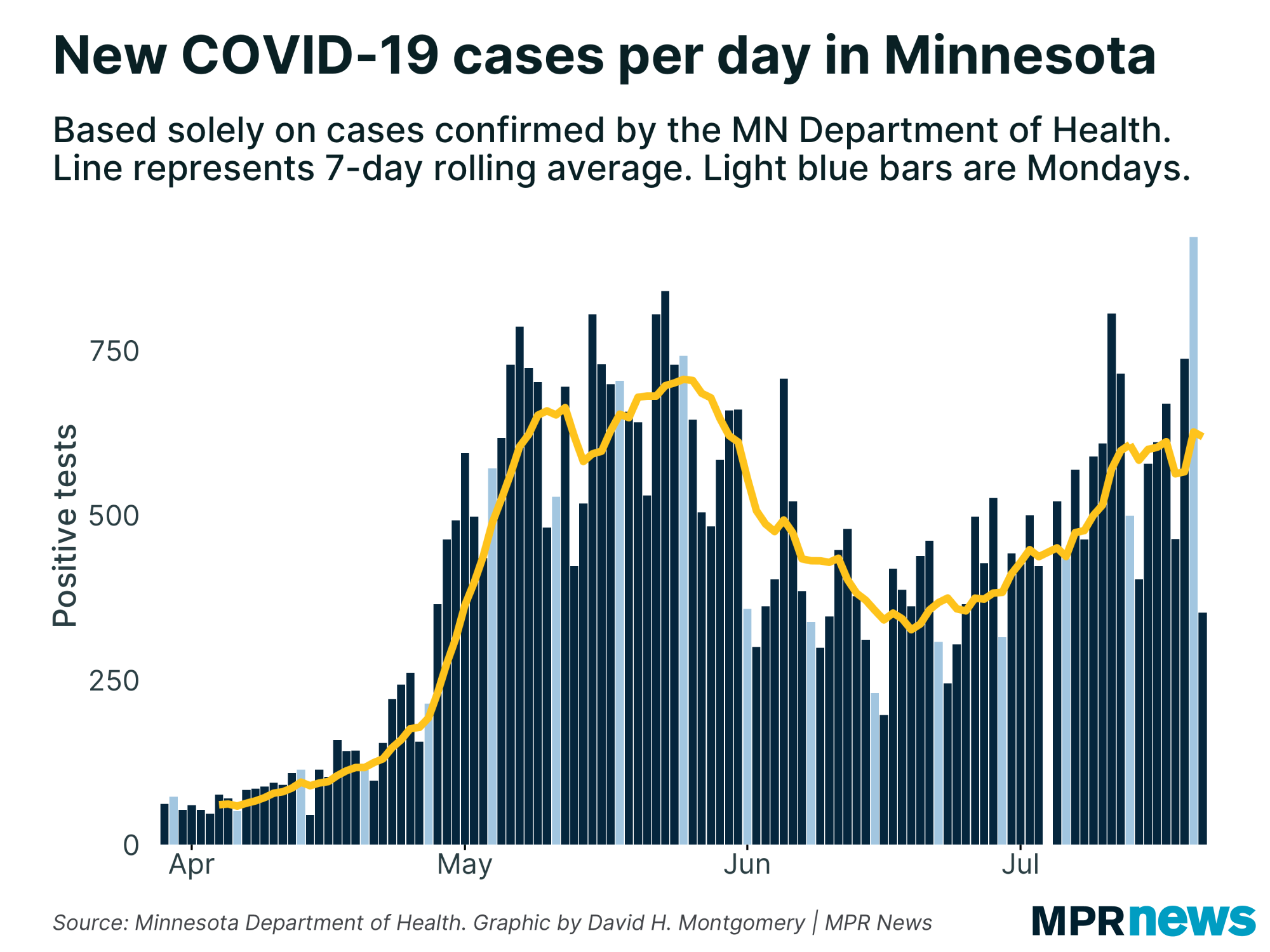 Officials acknowledged 14 letters have been sent to establishments flagged for violations. The state Public Safety department has the ability to issue fines and revoke liquor licenses, which would effectively close them.

Most bar and restaurant owners who’ve been flagged have responded positively, Minnesota Health Commissioner Jan Malcolm said Friday, adding that the state wants to avoid “wholesale closure” of these places.

The newest numbers come a day after Minnesota health leaders confirmed a sad milestone — the first death of a child in the state from COVID-19.

The infant, a 9-month-old from Clay County in northwestern Minnesota, is among the youngest deaths in the country from COVID-19 and the first death in Minnesota for anyone under age 20 who tested positive for the virus.

The child did not have an underlying health problem and had not been hospitalized, Kris Ehresmann, the state’s infectious disease director, told reporters. State health leaders have asked the federal Centers for Disease Control and Prevention to investigate.

Ehresmann said while current knowledge of the coronavirus puts children at lower risk, the possibility of infection is still there and officials are hoping to understand more about how the virus can affect children.

That includes Mower County in southeastern Minnesota, where there were 1,019 confirmed cases as of Tuesday. Mower County is home to Hormel Foods and Quality Pork Processors. Both have been partnering with Mayo Clinic to ramp up employee testing.

Nobles, in southwestern Minnesota, reported 1,711 confirmed cases as of Tuesday, with six deaths. About 1 in 13 people now have tested positive for COVID-19 in the county since the pandemic began, although the count of new cases has slowed considerably in recent weeks. 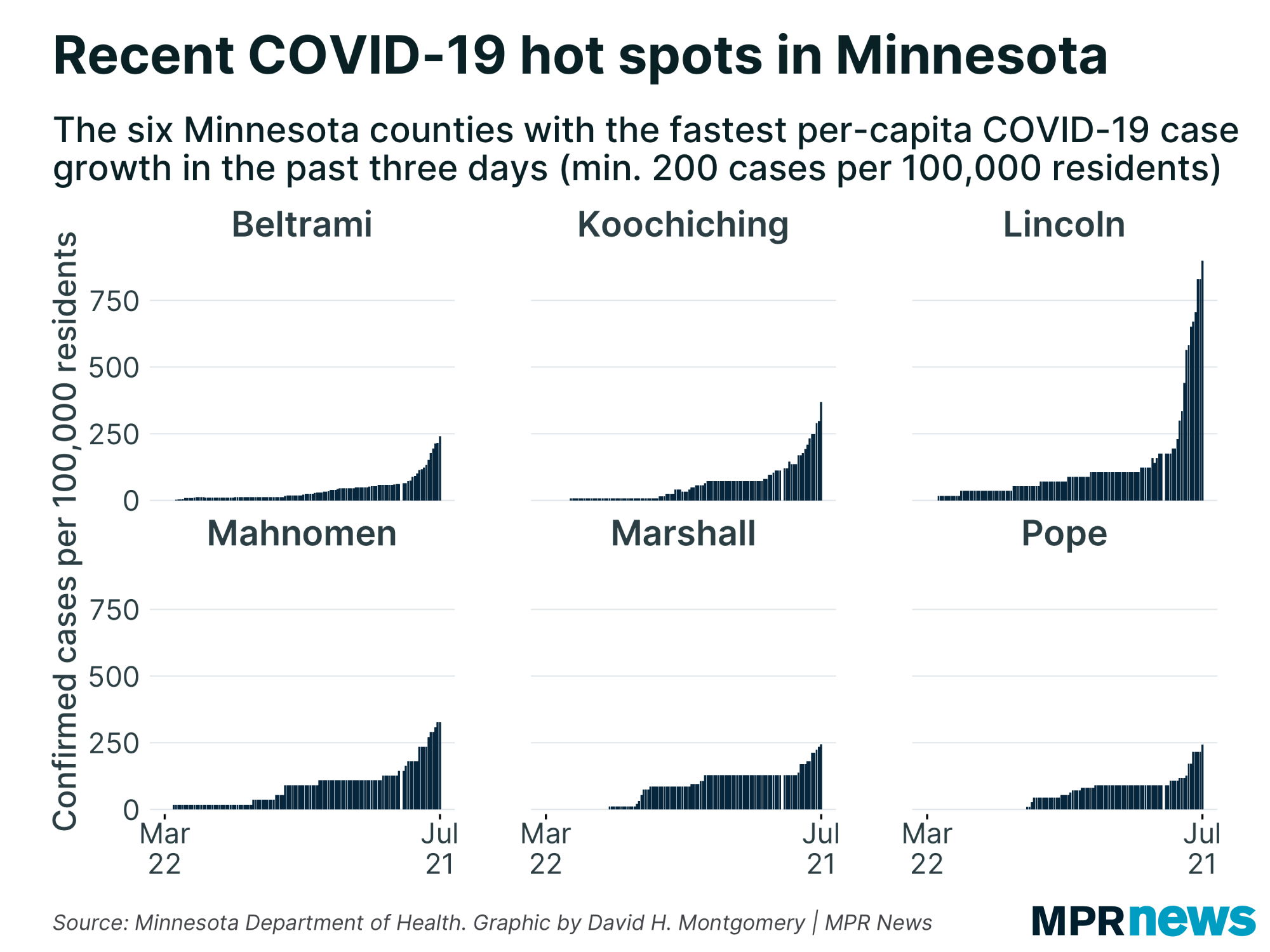 As of Tuesday, the Health Department reported 622 people have now tested positive. The county had confirmed three COVID-19 cases in late April.

Cases have also climbed noticeably in Lyon County (383 cases) around a turkey processor in Marshall.

One of Minnesota’s largest grocers is joining the list of retailers requiring shoppers to wear face masks. Cub Foods, owned by Rhode Island based United Natural Foods, says the requirement will go into effect next Tuesday.

The company says the move is in alignment with Centers for Disease Control and Prevention guidelines. The company already requires employees to wear masks in its stores.

Other major retailers, including Target, Walmart and Best Buy, announced similar measures in recent days, requiring customers to wear masks while in their stores.

The Minneapolis-St. Paul International Airport will be instituting a mask requirement next Monday.

The Metropolitan Airports Commission voted Monday to institute the mandate, although many airlines, businesses and other airports already require face coverings.

The Twin Cities airport says information kiosks in the terminals will provide face coverings for people who don’t have them.

To read the original stories and see more COVID-19 reporting, follow this link to the MPR News website.  https://www.mprnews.org/story/2020/07/21/latest-on-covid19-in-mn
News