A woman stands at the entrance to a store at Rosedale Center, which reopened in May in Roseville.   Photo: Christine T. Nguyen | MPR News file

Adding to the hearbreak, the first death of a child in the state — a 9-month-old in Clay County, home to Moorhead. The infant is among the youngest deaths in the country from COVID-19 and the first death in Minnesota for anyone under age 20 who tested positive for the virus.

The child did not have an underlying health problem and had not been hospitalized, Kris Ehresmann, the state’s infectious disease director, told reporters. The infant tested positive for COVID-19 and was identified as having an upper and lower respiratory infection; both were counted as causes of death, she said.

“A death involving such a young person is tragic, and certainly very unusual,” said Health Commissioner Jan Malcolm, adding that the state has asked the federal Centers for Disease Control and Prevention to investigate.

Ehresmann said while current knowledge of the coronavirus puts children at lower risk, the possibility of infection is still there and officials are hoping to understand more about how the virus can affect children.

Ehresmann added the spread of coronavirus to children is less likely to happen from another child and more likely to come from an adult to children, like in a household setting.

Officials, however, have been bracing Minnesotans to expect those numbers to rise as cases continue to jump.

The 922 infections posted Monday were a record for daily confirmed cases, although officials said the high number comes partly from the fact they are transitioning to a new reporting system, which may make the daily numbers choppy over the next few days.

Cases growing in most age brackets

State health officials continue to worry about the recent spike of coronavirus cases in younger Minnesotans, including that those infected will inadvertently spread the virus to more vulnerable populations.

Minnesotans in their 20s now make up the age group with the most confirmed cases with nearly 11,000. The median age of Minnesotans infected has been trending down in recent weeks and is now 37 years old.

Health investigators, however, are starting to see more cases in many age brackets, including ages 30 through 59, as more people get together for family gatherings and summer fun without social distancing, Ehresmann said. 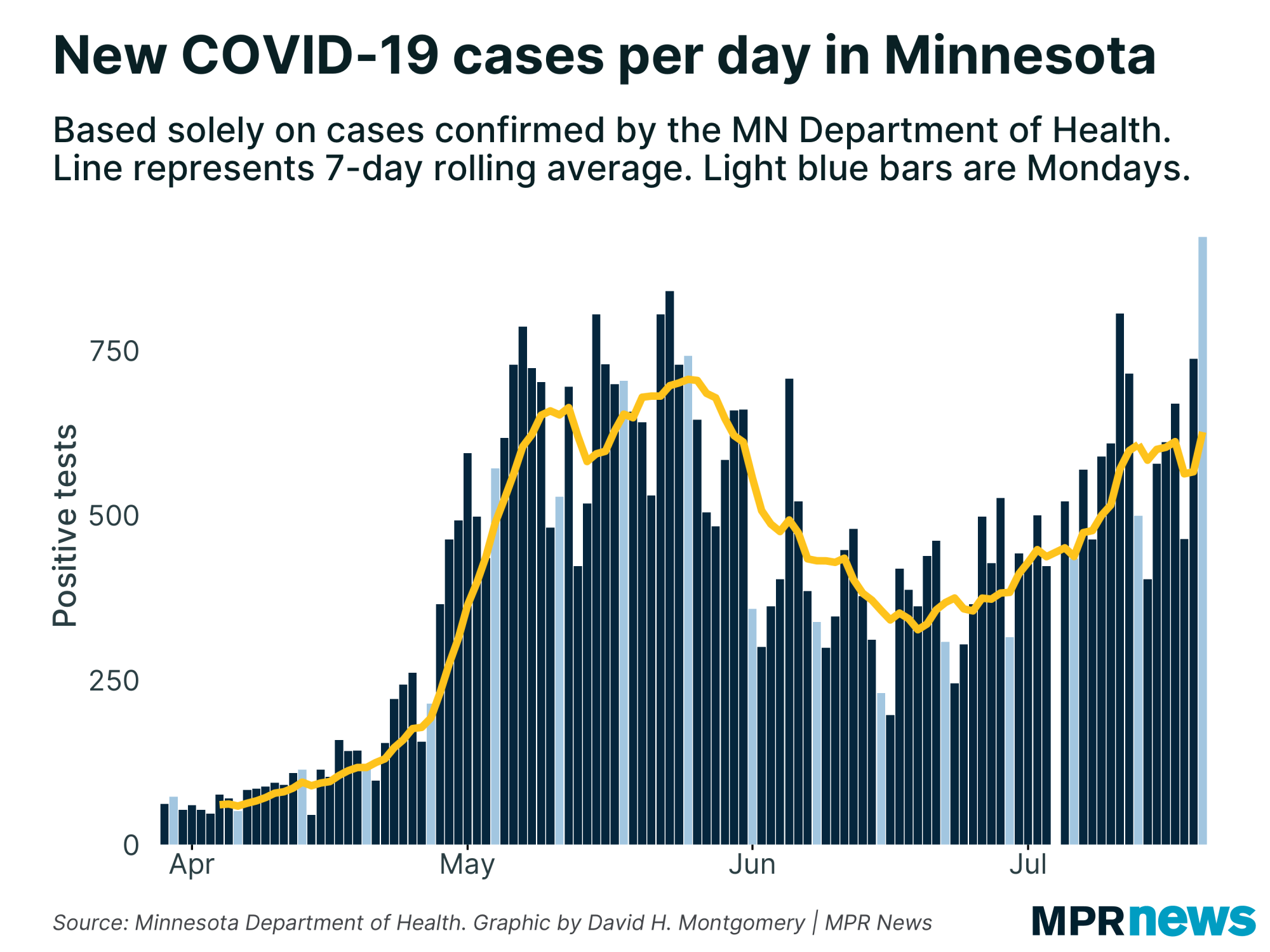 New cases are also rising in northern Minnesota. Cases in Beltrami County have nearly doubled in the past week, from 53 to 101. Ehresmann on Monday said the case increase is tied to spread from a “number of events” including athletic events.

The latest counts come as officials try to get their arms around clusters of problems centered around bars and restaurants. 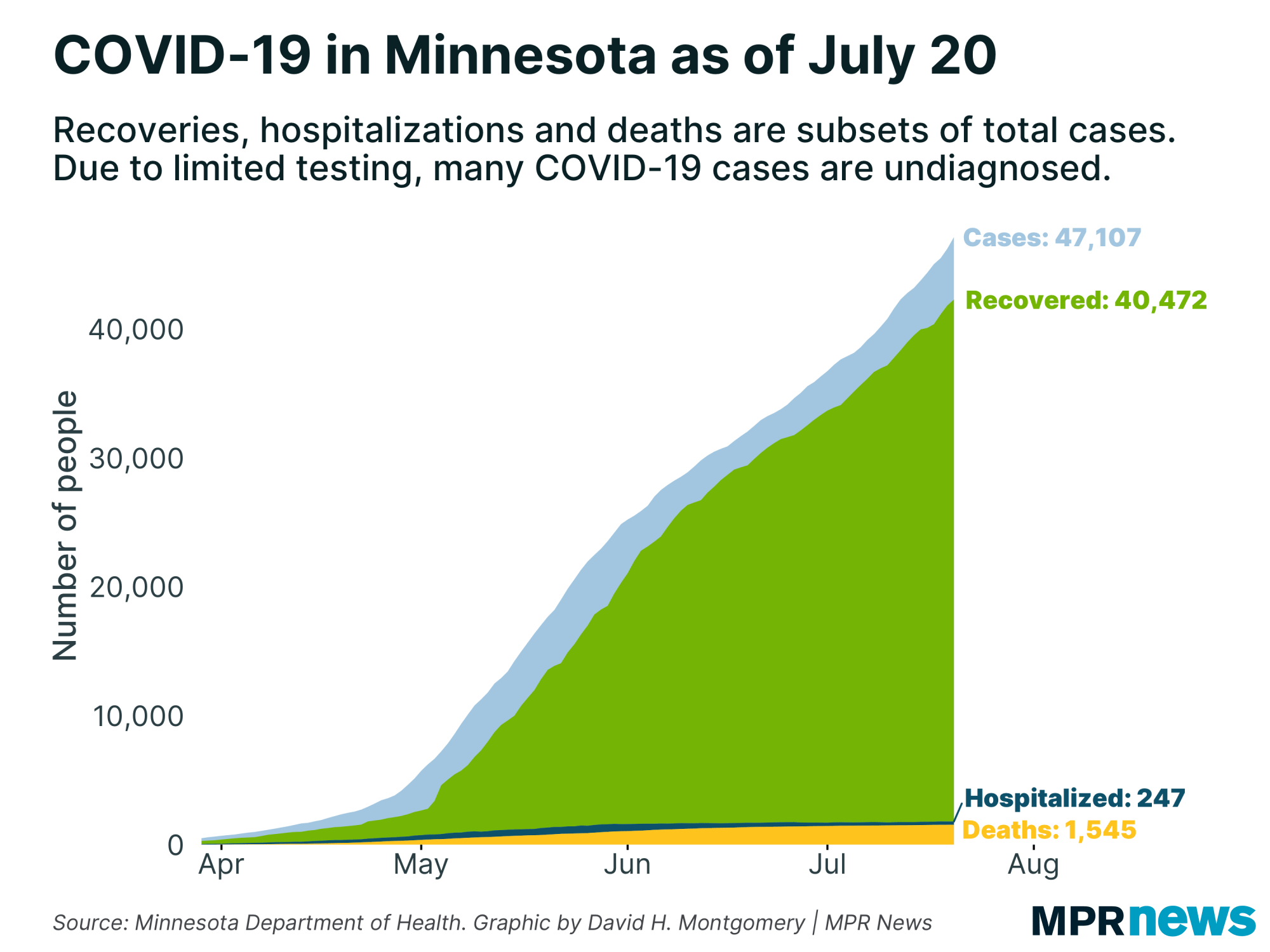 Because of that, the state is “stepping up enforcement,” Malcolm said, “not to play gotcha with restaurants and bars but because we feel it’s so essential” to protect Minnesotans.

Malcolm said most bar and restaurant owners who’ve been flagged have responded positively. She also noted that establishments that don’t comply are subject to cease-and-desist orders.

Malcolm said health officials continue to hope that bars, restaurants and other indoor social spaces get the message. The state, she said, is working to avoid “wholesale closure” of these places but that the rise in community spread must be checked. 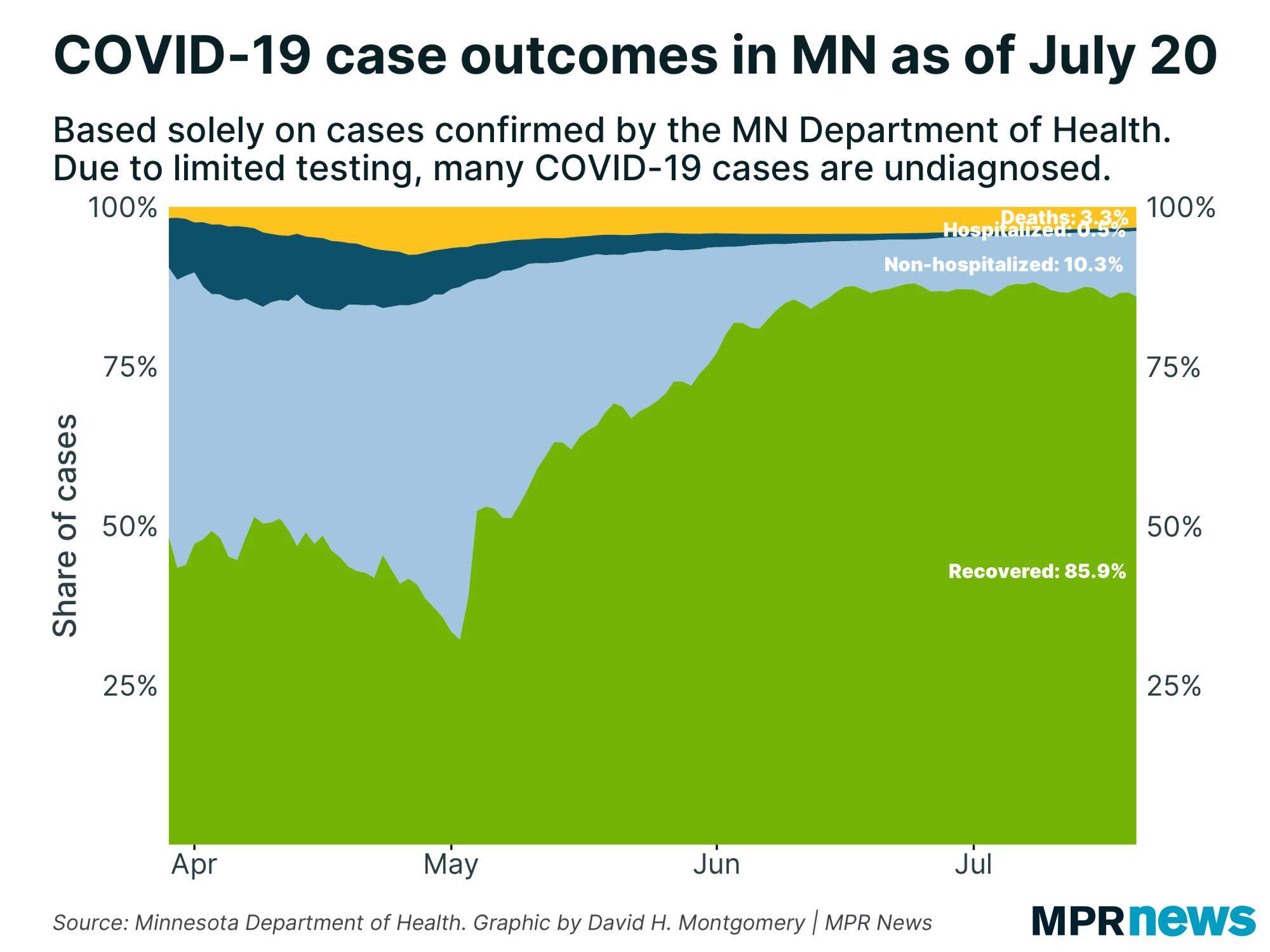 The state's top public health leaders on Monday reiterated their support for a statewide mask mandate, saying such mandates have proven to help prevent transmission of COVID-19.

Several Minnesota cities already have mask requirements in place. As for a statewide mask mandate, DFL Gov. Tim Walz is weighing the measure, but has yet to enact one — despite pleas from medical groups and the state Health Department.

Walz recently expressed concern that Minnesotans were lagging on their mask-wearing. But Republicans, including Senate Majority Leader Paul Gazelka, R-East Gull Lake, have said a statewide mandate would be a mistake.

On Friday morning, Walz told MPR News that he believes a mask mandate is the right thing to do to slow the spread of the coronavirus but that he hasn't yet made a decision on whether to issue a statewide order.

"I'm trying to get them to buy in,” Walz said of Gazelka and others who oppose a statewide mandate. “It's unfortunate that around masks, it became somewhat of a political statement rather than a public health statement.”

More than half of U.S. states now require the use of masks or face coverings in public settings.

That includes Mower County in southeastern Minnesota, where there were 1,008 confirmed cases as of Monday. Mower County is home to Hormel Foods and Quality Pork Processors. Both have been partnering with Mayo Clinic to ramp up employee testing.

Nobles, in southwestern Minnesota, reported 1,706 confirmed cases as of Monday, with six deaths. About 1 in 13 people now have tested positive for COVID-19 in the county since the pandemic began, although the count of new cases has slowed considerably in recent weeks. 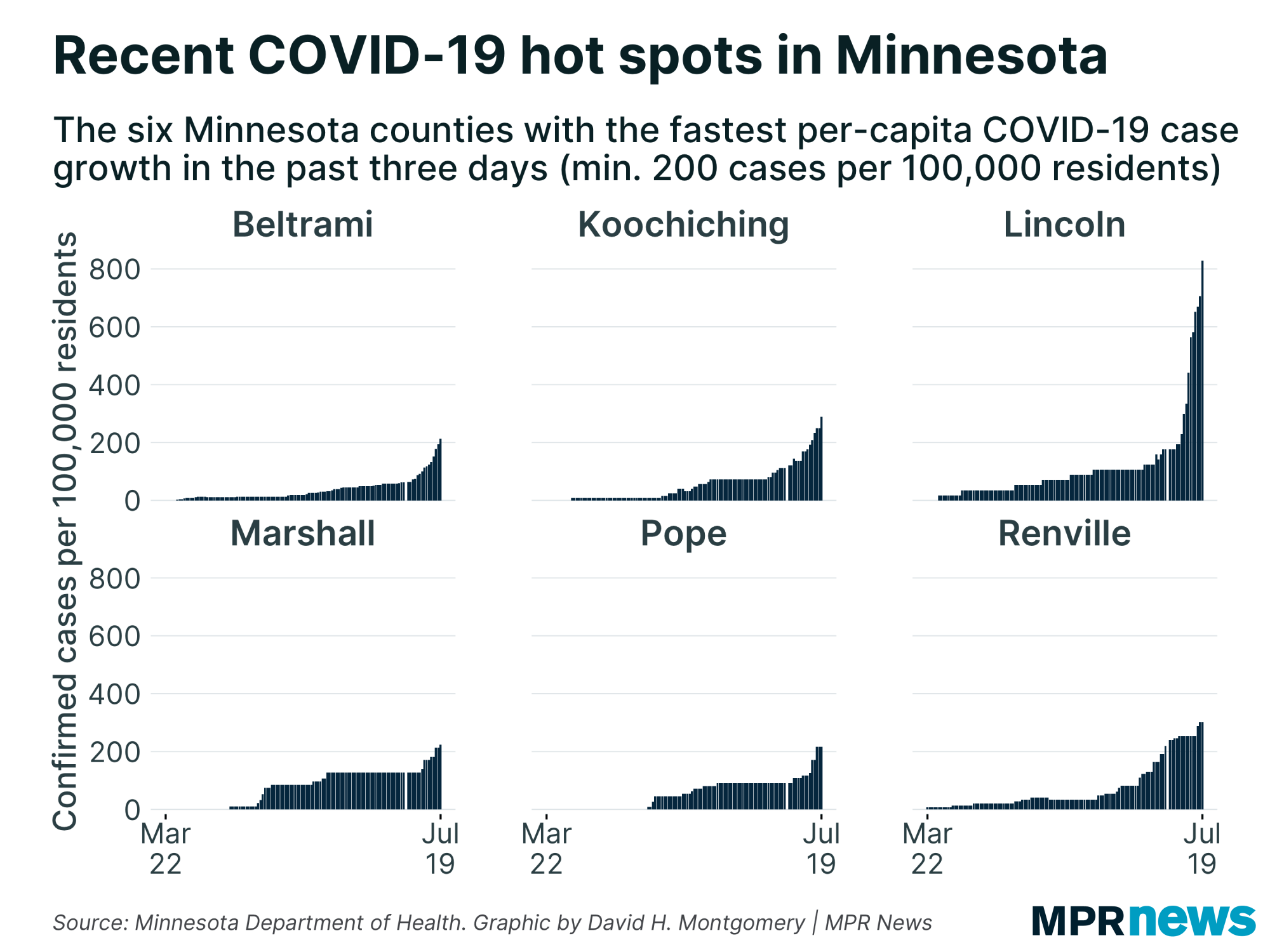 As of Monday, the Health Department reported 613 people have now tested positive. The county had confirmed three COVID-19 cases in late April.

Cases have also climbed noticeably in Lyon County (378 cases) around a turkey processor in Marshall.

The Minneapolis-St. Paul International Airport will be instituting a mask requirement next Monday.

The Metropolitan Airports Commission voted Monday to institute the mandate, although many airlines, businesses and other airports already require face coverings.

The Twin Cities airport says information kiosks in the terminals will provide face coverings for people who don’t have them.

U.S. Sen. Amy Klobuchar and Minnesota health officials are calling on the federal government to launch a nationwide effort to recruit plasma donors among people who have recovered from COVID-19.

COVID-19 survivors may have antibodies that can be key protections for people seriously ill with coronavirus infections. And while donations of the plasma that carries those antibodies initially proved relatively strong, the stocks have been diminishing.

Klobuchar said Minnesota has led the way — her own husband donated plasma at Mayo Clinic after being seriously ill with COVID-19.

"But a lot of places around the country that have even higher levels of COVID than we do here in Minnesota, just aren’t attuned to the need to give plasma. So that’s why we want to bring this out on a national basis," she said.

Dr. Claudia Cohn, associate director of laboratories and director of the blood bank laboratory at M Health Fairview, said places like New York have barely 10 percent of the plasma from recovered patients that they once had.

And while she says research is still figuring out the use of plasma as a treatment, donations from recovered COVID-19 patients are likely one of the fastest and beneficial options available to help people recover from coronavirus infections.

High school-aged students shut out of work due to the pandemic are pleading with Minnesota lawmakers to make them eligible for unemployment aid.

State law prevents the students 16 and older from collecting benefits.

Cole Stevens of the youth-led Don’t Forget US Campaign told a House committee Friday that he was laid off from his food service job due to COVID-19 closures. He contributes to household bills.

Stevens, 18, of Bloomington, said he received some jobless aid but that was later retracted when the state determined him to be ineligible. When working, he uses his earnings to contribute to household bills.

“I’m not just some lazy teenager trying to maximize his welfare here,” Stevens said. “I needed that money back then when I was in high school and I wasn’t able to get it.”

A bill pending in the Legislature’s special session would allow student workers to qualify for benefits. The proposal would be only a temporary fix that covers March through December of this year.

DEED Commissioner Steve Grove urged lawmakers to revise a law dating to the 1930s that prevents young workers from qualifying for unemployment.

Grove said Minnesota is “way behind” many other states have already adjusted their laws to account for displaced young workers.

“These aren’t just aren’t kids with summer jobs for fun. For many of these students these unemployment benefits are primary or at least secondary breadwinners for their family,” Grove said. “That money is going into food on the table, clothes on their backs, keeping those families sustained throughout really challenging times. And when they can’t work, it is all that more challenging.”

Competing House and Senate proposals differ over whether the money would come from a federal relief program or the standard unemployment fund.

To read the original stories and see more COVID-19 reporting, follow this link to the MPR News website.  https://www.mprnews.org/story/2020/07/21/latest-on-covid19-in-mn