The number of newly confirmed COVID-19 cases in Minnesota dropped on Saturday even as the number of completed tests increased to one of the highest daily totals so far.

State health officials reported 464 new confirmed cases on Saturday, down from more 669 in Friday's report. That's as testing increased to 16,451 reported results, up from 14,299 on Friday and among the highest single-day totals reported in Minnesota to date. The percentage of positive tests dipped from 4.7 percent on Friday to 2.8 percent in Saturday's report.

While those numbers are increasing, they're still far below the peaks seen in May, when more than 600 people were hospitalized.

Saturday’s updated numbers come as community spread of the coronavirus has increased across the Minnesota, and state leaders have made clear that reopening may need to be dialed back if case counts continue rising.

The state has been backsliding in its fight against the disease’s spread, and “it’s extremely likely” that Minnesota will see hospitalizations and intensive care cases on the upswing, possibly as soon as next week, Kris Ehresmann, the state's infectious disease director, said Friday.

Investigators, she said, anticipated a pattern of Minnesota outbreaks clustered around bars as they began to reopen to indoor service over the past few weeks. It happened as expected, surfacing in Mankato, Minneapolis, St. Cloud, Duluth and Bemidji.

She and others have warned for weeks that while the young adults who’ve been driving the recent case increases may not suffer the worst effects of the disease, they may inadvertently spread it to grandparents and other potentially more vulnerable people.

Community spread — where officials can’t trace the precise path of an infection — is a growing concern.

The complaints include staff not wearing masks, not enough social distancing and too many people at a site.

Because of that, the state is “stepping up enforcement,” she said, “not to play gotcha with restaurants and bars but because we feel it’s so essential” to protect Minnesotans.

Malcolm said most bar and restaurant owners who’ve been flagged have responded positively but also noted that establishments that don’t comply are subject to cease and desist orders.

Malcolm said health officials continue to hope that bars, restaurants and other indoor social spaces get the message. The state, she said, is working to avoid “wholesale closure” of these places but that the rise in community spread must be checked.

Cases growing in most age brackets — and up north

Minnesotans in their 20s now make up the age group with the most confirmed cases. The median age of Minnesotans infected has been trending down in recent weeks and is now below 38 years old.

Young people still account for the majority of new confirmed cases in Minnesota, although 20-somethings have fallen from around 40 percent of new cases a few weeks ago. 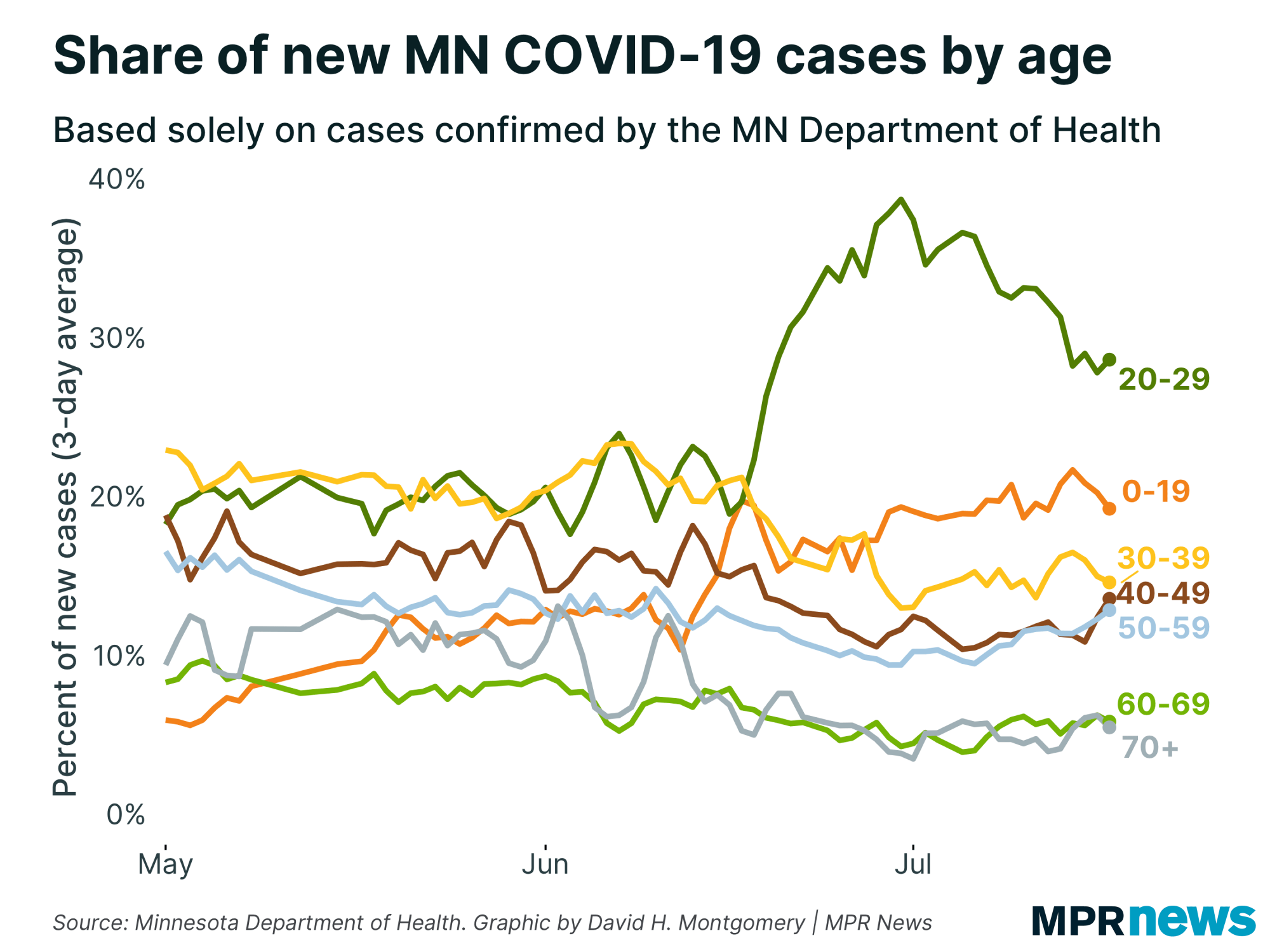 While current hospitalization counts in Minnesota remain relatively low, “we are likely going to see increases in hospitalizations because of the ripple effect” of younger people becoming infected, Ehresmann said earlier in the week, adding that young adults “don’t live in a vacuum.”

The latest numbers, though, show COVID-19 cases have gone up significantly the past few days in every age bracket except people over 60.

Cases are growing as quickly now in there, on a per capita basis, as they were in the Twin Cities suburbs a month ago. 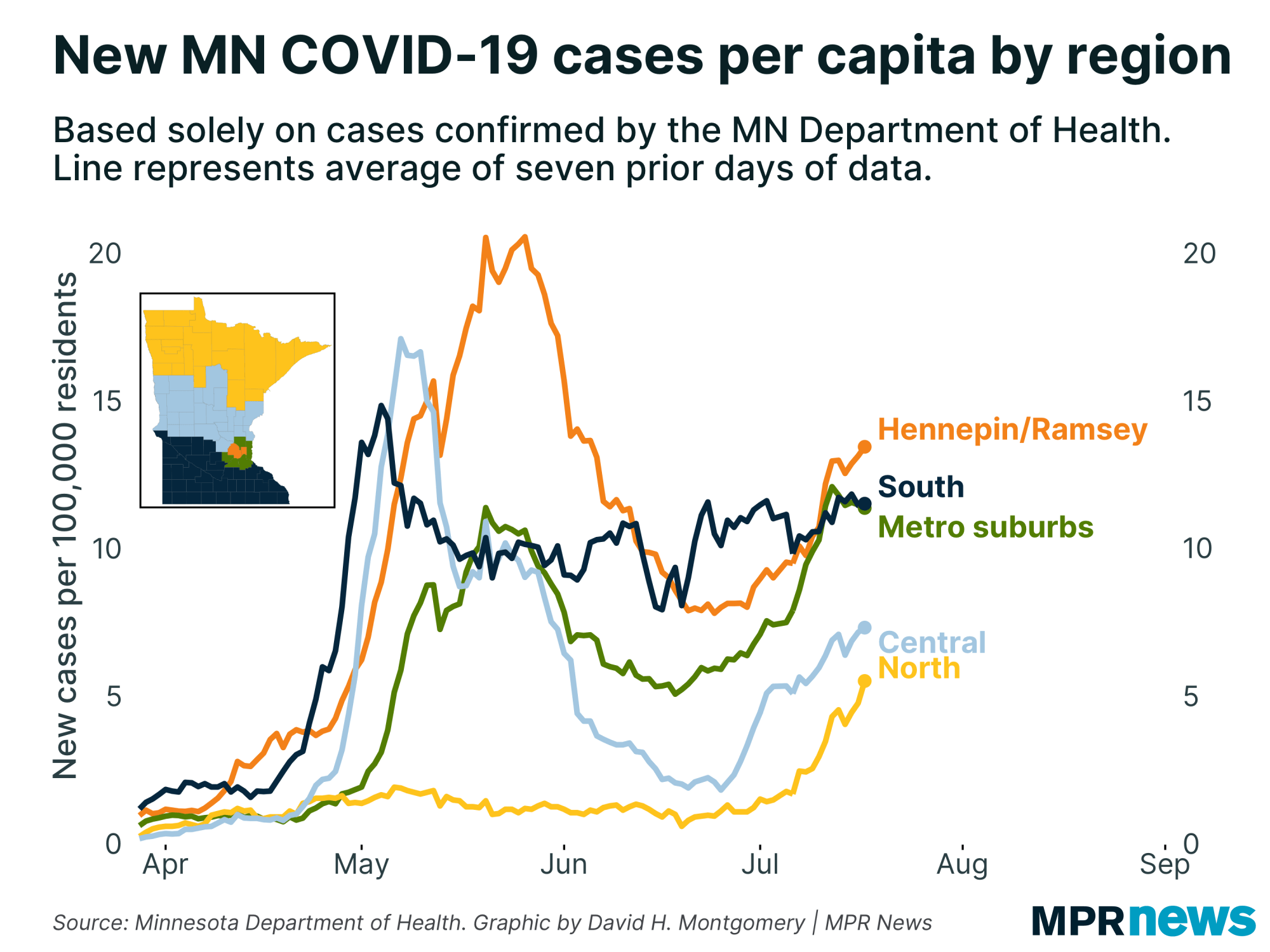 Worries grow over another equipment shortage

State health officials this week have expressed concern about running short on protective equipment for health care workers as well as the supplies needed to test for COVID-19. They said they were moving to bolster those supplies.

Along those lines, Ehresmann on Friday said the Health Department has been getting reports of some businesses, child care operations and youth sports camps requiring people to test negative for COVID-19 before returning.

The department, she said, is discouraging such testing.

Officials worry that such testing is using up testing supplies needlessly — testing supplies are strained nationally due to massive outbreaks in other states — and won’t help companies or youth sports operate disease-free.

“A negative test only means that you are negative on that day, and you certainly could be positive on the very next day,” Ehresmann told reporters Friday, adding that the agency wants to prioritize tests for Minnesotans with symptoms or who’ve had known COVID-19 exposure.

She said anyone displaying COVID-19 symptoms should isolate for at least 10 days after the symptoms began and go at least three days without symptoms or a fever.

As they’ve done consistently in the pandemic, Malcolm and Ehresmann continued on Friday to implore Minnesotans to stay vigilant to slow the spread of COVID-19.

So far, state leaders have emphasized personal responsibility when it comes to mask-wearing, social distancing and hygiene. DFL Gov. Tim Walz is weighing a statewide mask mandate, but has yet to enact one — despite pleas from medical groups and the state Health Department.

Walz expressed concern earlier this week that Minnesotans were lagging on their mask-wearing. But Republicans, including Senate Majority Leader Paul Gazelka, R-East Gull Lake, have said a statewide mandate would be a mistake. 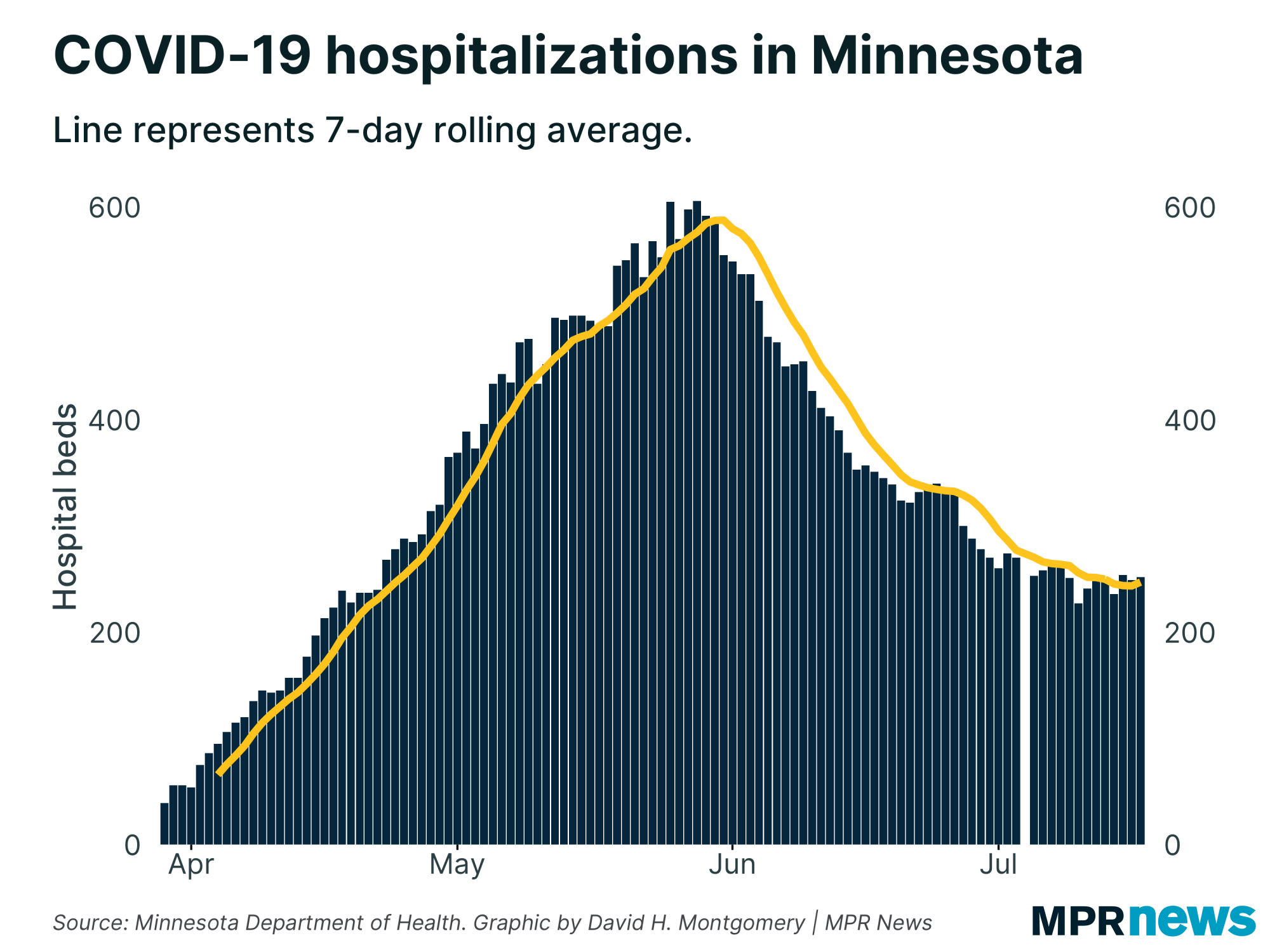 On Friday morning, Walz told MPR News that he believes a mask mandate is the right thing to do to slow the spread of the coronavirus but that he hasn't yet made a decision on whether to issue a statewide order.

"I'm trying to get them to buy in,” Walz said of Gazelka and others who oppose a statewide mandate. “It's unfortunate that around masks, it became somewhat of a political statement rather than a public health statement.”

More than half of US states now require the use of masks or face coverings in public settings.

During the Friday MPR News interview, Walz also said sate officials are still working on a plan on whether to reopen schools to in-person learning this fall.

The governor said students need to be back in school, but added that there were many complicating factors to consider, including the health risks to students, teachers and staff.

"It's a challenge because parents wants to know,” he said. He offered an example of one plan where children in younger grades would return to in-person instruction, middle grades would use a “hybrid” model older students could potentially work online. He conceded: “That's extremely complicated because a lot of families have a child in each grade.”

The federal Centers for Disease Control and Prevention has delayed releasing expected guidance for schools on how to reopen to students.

That includes Mower County in southeastern Minnesota, where there were 999 confirmed cases as of Friday. Mower County is home to Hormel Foods and Quality Pork Processors. Both have been partnering with Mayo Clinic to ramp up employee testing.

Nobles, in southwestern Minnesota, reported 1,702 confirmed cases as of Friday, with six deaths. About 1 in 13 people now have tested positive for COVID-19 in the county since the pandemic began, although the count of new cases has slowed considerably in recent weeks. 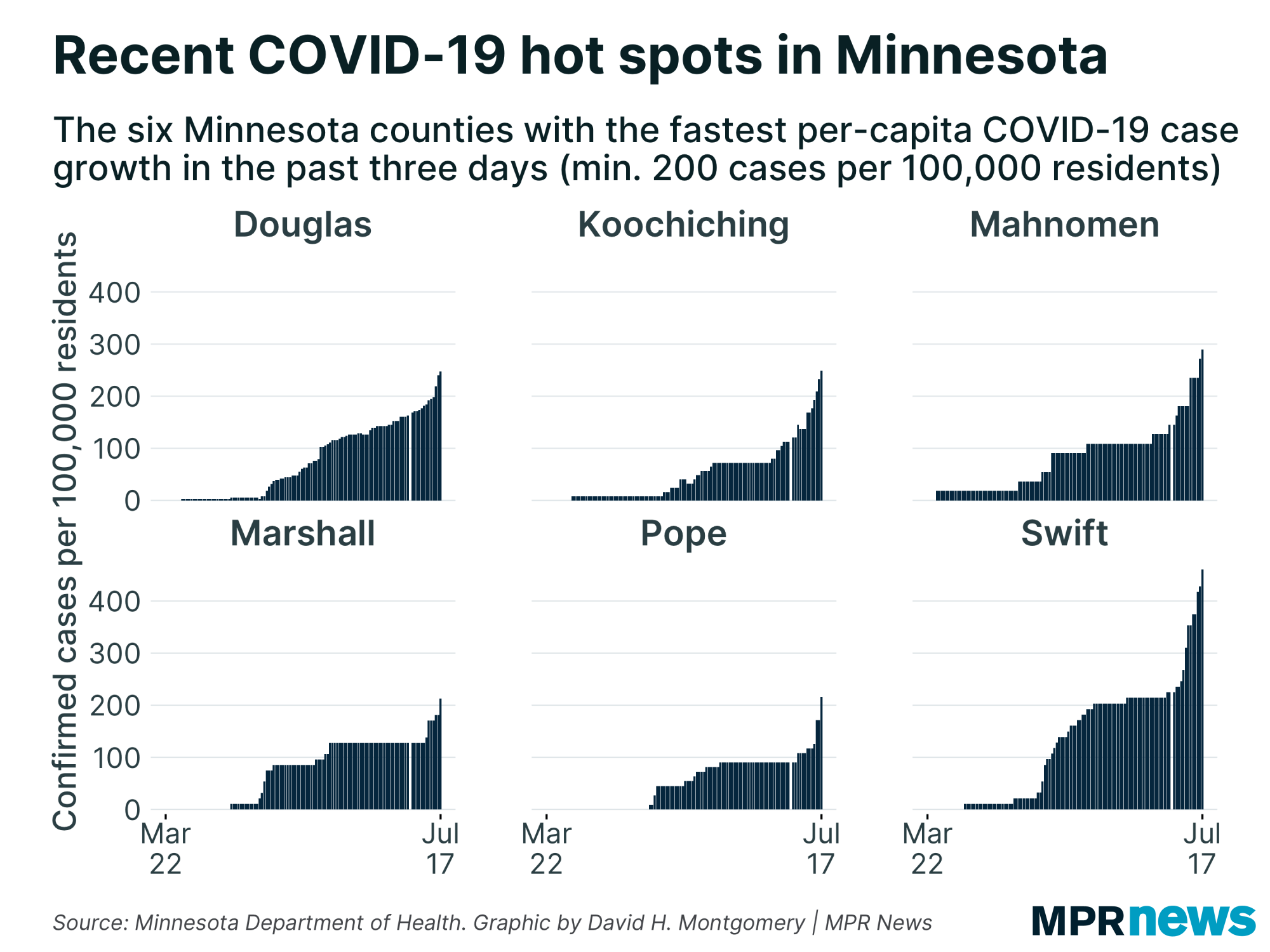 As of Friday, the Health Department reported 610 people have now tested positive. The county had confirmed three COVID-19 cases in late April.

Cases have also climbed noticeably in Lyon County (371 cases), around a turkey processor in Marshall. 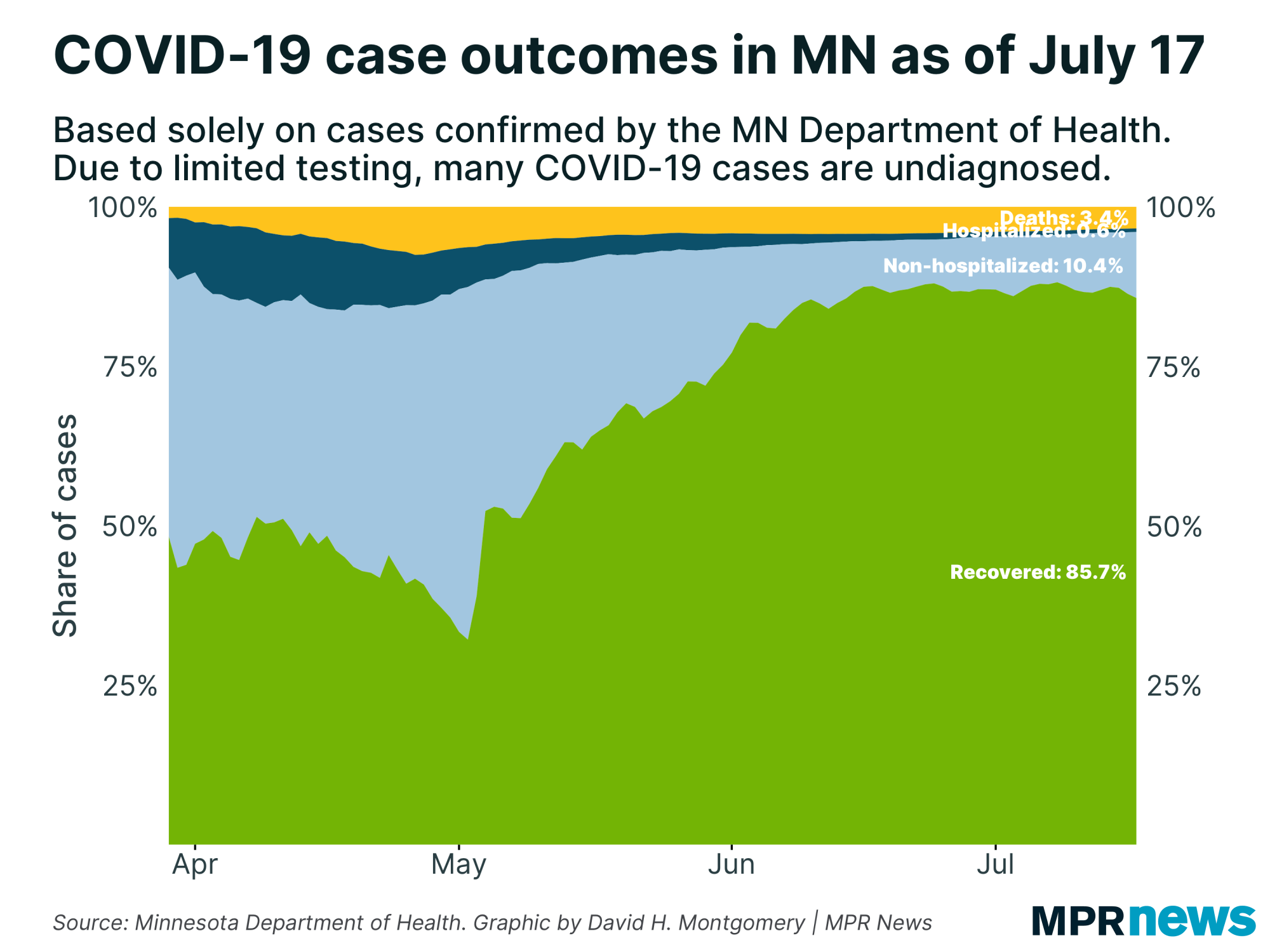 Another Minnesota-based business chain is mandating face coverings for customers. Caribou Coffee says masks will be required to enter all company-owned locations starting Monday. Exceptions will be made for young children and people with medical exemptions.

People who do not have masks can still use the drive-thru or curbside pickup.

And the Super One grocery chain in northern Minnesota has announced its requiring face coverings, effective immediately.

High school-aged students shut out of work due to the pandemic are pleading with Minnesota lawmakers to make them eligible for unemployment aid.

State law prevents the students 16 and older from collecting benefits.

Cole Stevens of the youth-led Don’t Forget US Campaign told a House committee Friday that he was laid off from his food service job due to COVID-19 closures. He contributes to household bills.

Stevens, 18, of Bloomington, said he received some jobless aid but that was later retracted when the state determined him to be ineligible. When working, he uses his earnings to contribute to household bills.

“I’m not just some lazy teenager trying to maximize his welfare here,” Stevens said. “I needed that money back then when I was in high school and I wasn’t able to get it.”

A bill pending in the Legislature’s special session would allow student workers to qualify for benefits. The proposal would be only a temporary fix that covers March through December of this year.

DEED Commissioner Steve Grove urged lawmakers to revise a law dating to the 1930s that prevents young workers from qualifying for unemployment.

Grove said Minnesota is “way behind” many other states have already adjusted their laws to account for displaced young workers.

“These aren’t just aren’t kids with summer jobs for fun. For many of these students these unemployment benefits are primary or at least secondary breadwinners for their family,” Grove said. “That money is going into food on the table, clothes on their backs, keeping those families sustained throughout really challenging times. And when they can’t work, it is all that more challenging.”

Competing House and Senate proposals differ over whether the money would come from a federal relief program or the standard unemployment fund.

Walz says a mask mandate is the right call, but he's waiting for more GOP support: The governor talked with Morning Editon host Cathy Wurzer to talk about the possibility of a mask mandate, and shared some discussion on whether the Legislature can reach an agreement on police reform during the special Legislative session, and what variables he’s weighing on how the school year will be handled during the pandemic.

3M file suit for price gouging of N95 masks: The Twin Cities-based manufacturing giant and leading maker of N95 masks in the country says it has investigated 4,000 reports of fraud, counterfeiting and price gouging in connection with the product and has filed 18 lawsuits.

To read the original stories and see more COVID-19 reporting, follow this link to the MPR News website.  https://www.mprnews.org/story/2020/07/18/latest-on-covid19-in-mn