Latest on COVID-19 in MN: 'We are at a worrisome point' Isaiah Pitchford, general manager at The 507 in Mankato, Minn., prepares drinks while wearing a mask at the bar on July 8.  Photo: Leila Navidi | Star Tribune via AP file

State health officials are cautioning families to make plans in case children’s caregivers fall ill from COVID-19 as the number of cases continues to climbing, warning that all Minnesotans must do more to halt the virus’ spread.

"We are, in fact, at a worrisome point that our numbers are going up,” Dr. Ruth Lynfield, the state epidemiologist, said of the two-week trend in daily case counts. "This really is a moment for all of us to take a step back and think about what we can do to slow transmission."

So far, state leaders have emphasized personal responsibility when it comes to mask-wearing, social distancing and hygiene. DFL Gov. Tim Walz is weighing a statewide mask mandate, but has yet to enact one — despite pleas from medical groups and the state Health Department.

Walz himself expressed concern earlier this week that Minnesotans were lagging on their mask-wearing. But Republicans, including Senate Majority Leader Paul Gazelka, R-East Gull Lake, have said a statewide mandate would be a mistake.

As mask use appears to lag, cases continue to tick up and the state is encouraging parents to make a plan in case they or their kids’ caregivers fall ill with COVID-19. Kris Ehresmann, the state’s infectious disease director, said parents should pull together information on children’s medical and educational needs, routines and comforts. The Health Department has posted “make a plan” guidance on its website.

Lynfield said it will be “a long time in the best scenario” before an effective COVID-19 vaccine becomes available. Until then, she said, people shouldn’t let down their guard, no matter how tired they are of wearing a mask.

“It is really up to us to make the choice to limit the spread,” Lynfield said. “The virus is out there. We want to be able to live in a pandemic as best we can.”

The newest counts come as state health officials continue to worry about the recent spike of coronavirus cases in younger Minnesotans, with current fears including that those infected will inadvertently spread the virus to more vulnerable populations. 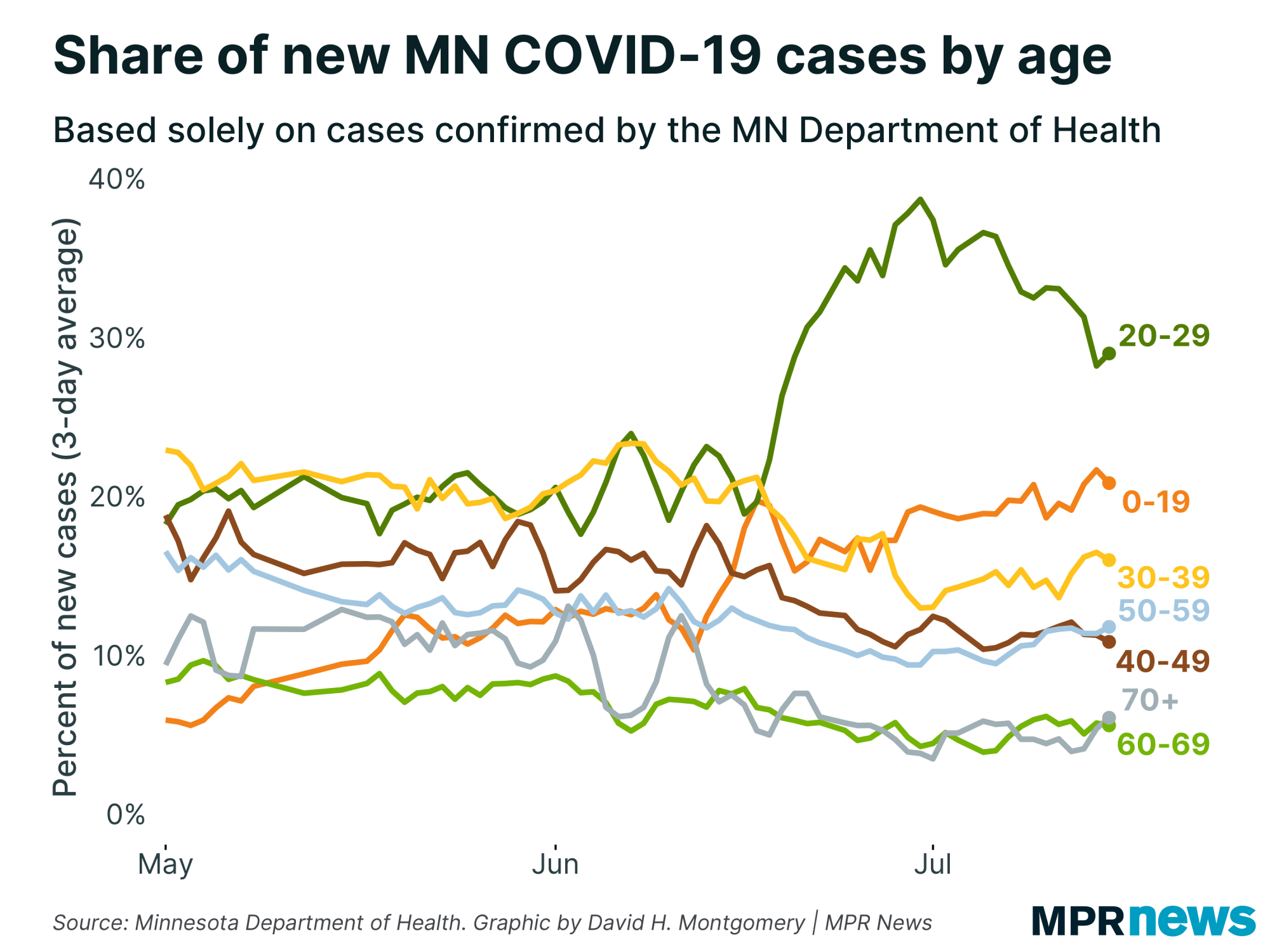 Minnesotans in their 20s now make up the age group with the most confirmed cases, with more than 10,000 since the outbreak started. The median age of Minnesotans infected has been trending down in recent weeks and is now below 38 years old.

While current hospitalization counts in Minnesota remain relatively low, “we are likely going to see increases in hospitalizations because of the ripple effect” of younger people becoming infected, said Ehresmann, adding that young adults “don’t live in a vacuum.”

Amid recent case upticks, worries over another PPE shortage

State health officials on Wednesday also noted that there are some personal protective equipment supply issues popping up again globally. Health Commissioner Jan Malcolm said that hospitals have their own supplies in addition to a shared stockpile, and that the state currently has about 106 days worth of N95 respirator masks and 60 days of nonlatex gloves.

She said there has been some testing supplies shortages in recent days, and she expects similar shortages with personal protective equipment.

"We're not assuming we have enough,” she said, “we do have a very good supply right now, but because of what we're seeing with global supply chain issues reemerging, we're continuing to look to source additional supplies of some of the high quality masks and gowns and the like that we anticipate needing as this pandemic evolves.”

Malcolm said she expects the demand to grow in the fall as the flu season begins.

The governor on Wednesday said he is working on a plan to get K-12 students back in classrooms safely. In an interview with WCCO, Walz said he planned to spend some of his day working on a plan for the upcoming academic year.

Walz and other state leaders have told schools to prepare for three different scenarios for resuming school in the fall: distance learning, in-person learning or a hybrid of the two approaches. Officials have said that they will announce by the end of July which scenario districts and charters should choose. 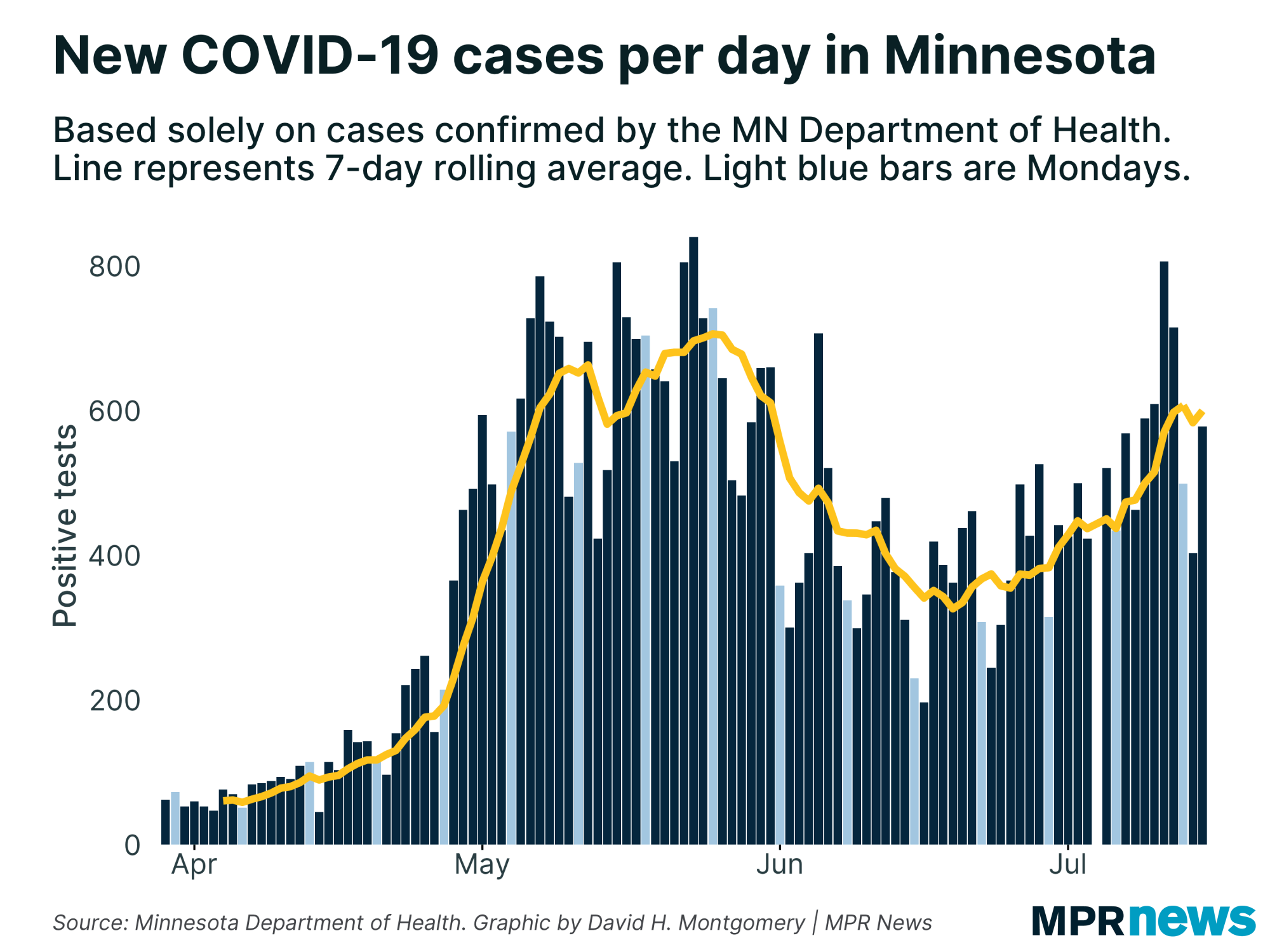 That includes Mower County in southeastern Minnesota, where there were 994 confirmed cases as of Wednesday. Mower County is home to Hormel Foods and Quality Pork Processors. Both have been partnering with Mayo Clinic to ramp up employee testing.

Nobles, in southwestern Minnesota, reported 1,698 confirmed cases as of Wednesday with six deaths. About 1 in 13 people now have tested positive for COVID-19 in the county since the pandemic began, although the count of new cases has slowed considerably in recent weeks.

As of Wednesday, the Health Department reported 600 people have now tested positive in the county, the same as Monday. The county had confirmed three COVID-19 cases in late April.

Cases have also climbed noticeably in Lyon County (364 cases), around a turkey processor in Marshall. Cases the past few weeks have also grown in Cottonwood County (144 cases), home to a pork processing plant in Windom in southern Minnesota, but the counts there have since stabilized. 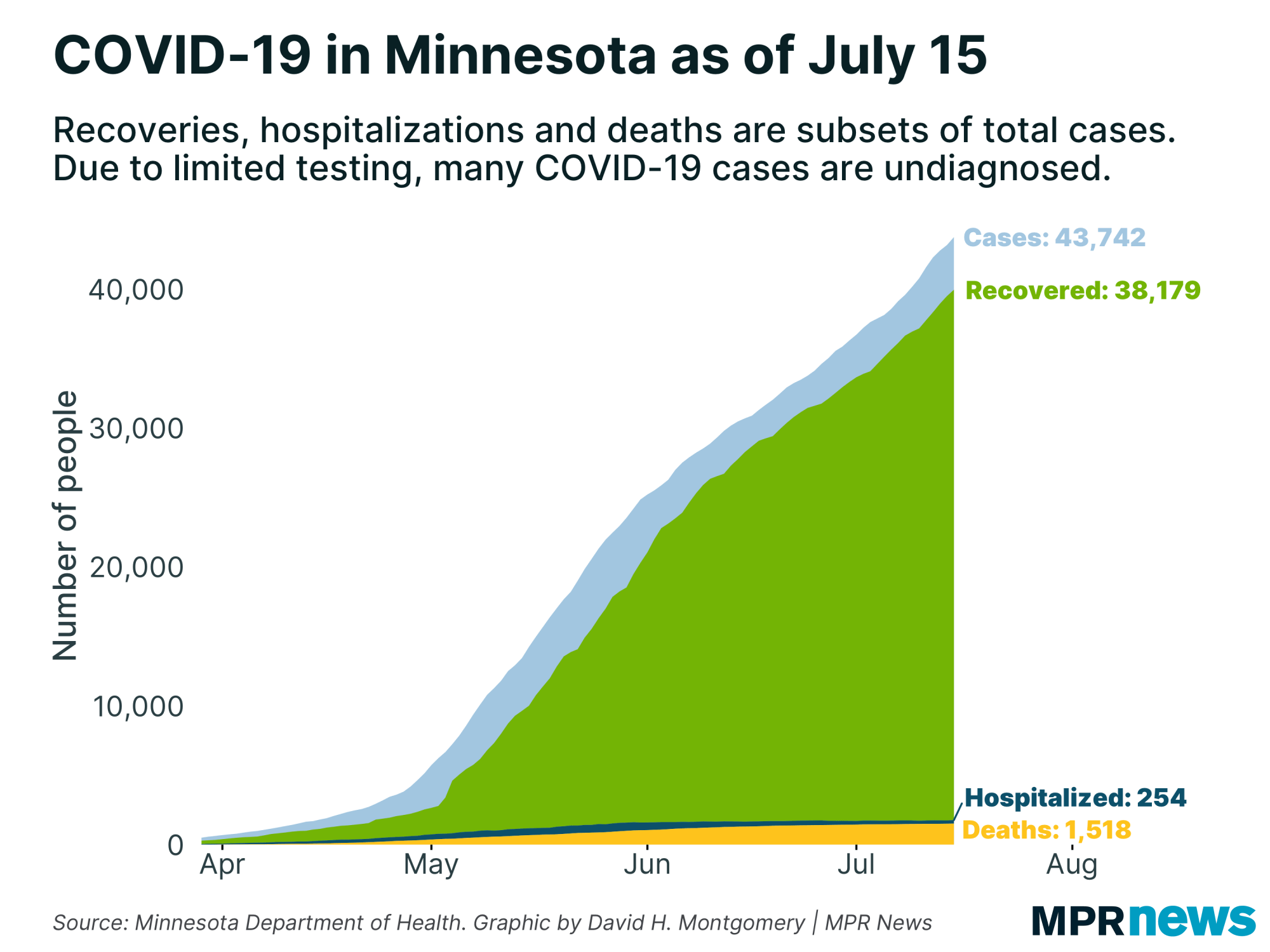 The Fond Du Lac Band of Lake Superior Chippewa has banned smoking at its main casino in Carlton, a major step from standard practice at tribal gaming operations in Minnesota.

The ban went into effect Wednesday morning in all buildings at the Black Bear Resort Casino which sits next to Interstaste 35 south of Cloquet, Minn. The outright ban is unprecedented among high-profile tribal gaming operations in Minnesota. The Fond Du Lac band prohibited smoking at its much smaller casino in downtown Duluth a month ago.

Black Bear general manager Daniel George LaPrairie said the decision was in part because people smoking were not wearing masks, prompting concern about the potential spread of COVID-19.

“Employees and guests and the community are the forefront of our thoughts here. We are definitely concerned with the health and well being of our community,” he said. “This is a step in the right direction, and we’ll keep making those steps in those decisions to keep us safe here.

LaPrairie said the decision was temporary, but that it may last beyond the COVID-19 outbreak. He said cultural attitudes both in Native and wider communities were moving against smoking, and that he believes tribal gaming may take wider action against the practice.

Best Buy, the nation's largest consumer electronics chain, will require customers to wear face coverings at all of its stores nationwide, even in states or localities that don't require them to do so.

The retailer, based in Richfield, Minn, joins a growing but still short list of retailers and restaurants that have instituted mask mandates throughout their chains. Starbucks announced last week that customers who visit its company-owned café locations in the U.S. will be required to wear face coverings. The policy will be in effect on Wednesday as well.

Best Buy Co. said Tuesday it will provide a face covering if a customer doesn’t have one, and small children and those unable to wear one for health reasons may enter without one. It said that customers who have concerns about wearing mask will be able to shop Best Buy via its website and app and choose home delivery or contactless curbside pickup.

The moves come after The Retail Industry Leaders Association, which represents Best Buy as well as Target, Home Depot and other major chains, publicized last week a letter it sent to state governors to mandate store customers to wear face coverings. It said the hodgepodge of rules around the country have created confusion for shoppers and that has lead to conflict between customers and workers trying to enforce store rules.

The National Governors Association said last week that its members are discussing the letter and others like it from different retail groups.

Duluth joins growing list of Minnesota cities to require masks: The Duluth City Council unanimously approved an emergency ordinance Monday night requiring face coverings in many indoor spaces. In the absence of a statewide requirement, many of the state’s largest cities have passed similar measures.

3M developing paper-based coronavirus test that could give results in minutes: Maplewood-based 3M says it is working with the Massachusetts Institute of Technology on a point-of-care test for the COVID-19 that could make diagnosing infections nearly as simple as a home pregnancy test.