Minnesota’s COVID-19 caseload continued climbing Tuesday, raising concerns inside and outside the state. 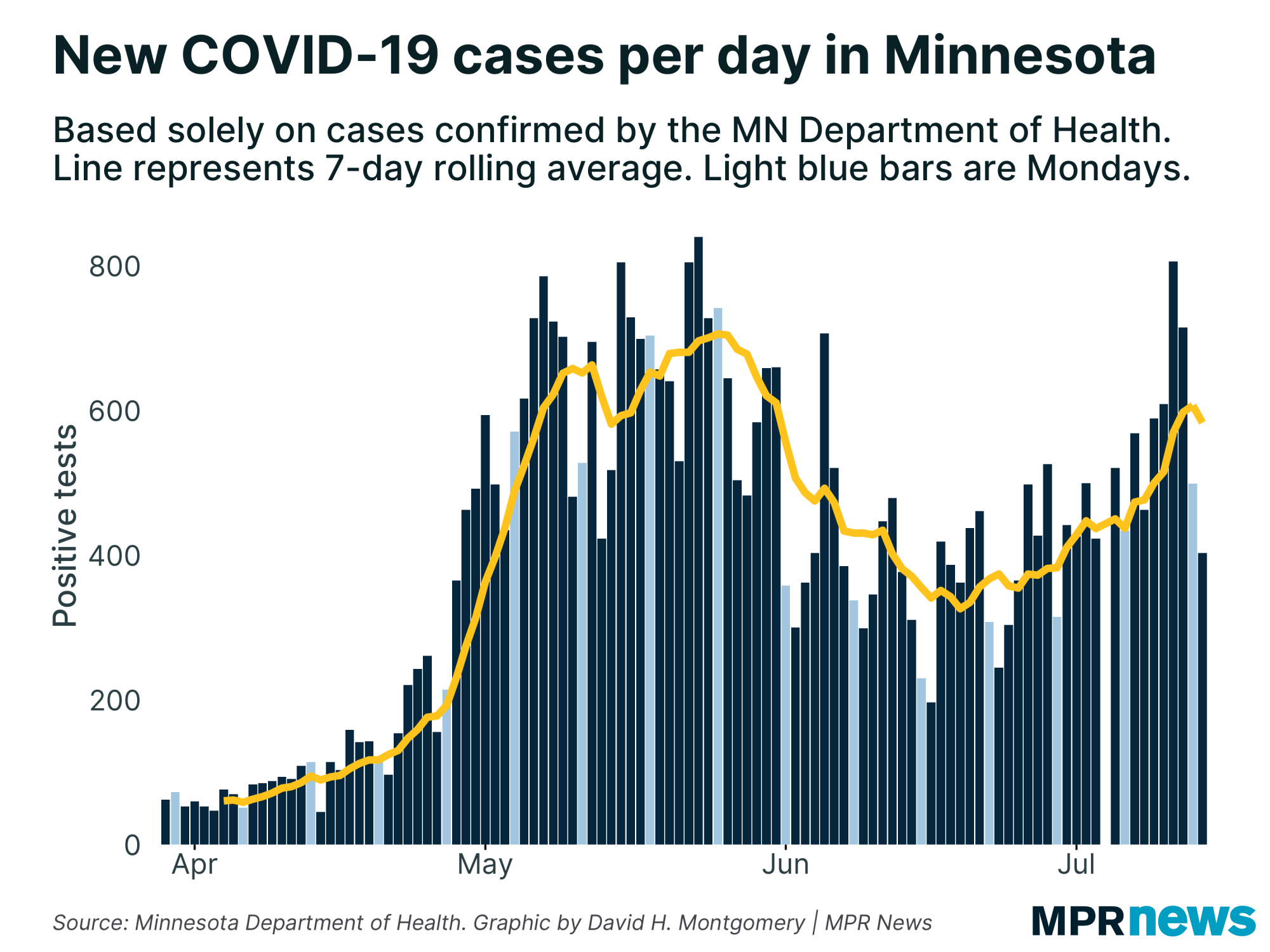 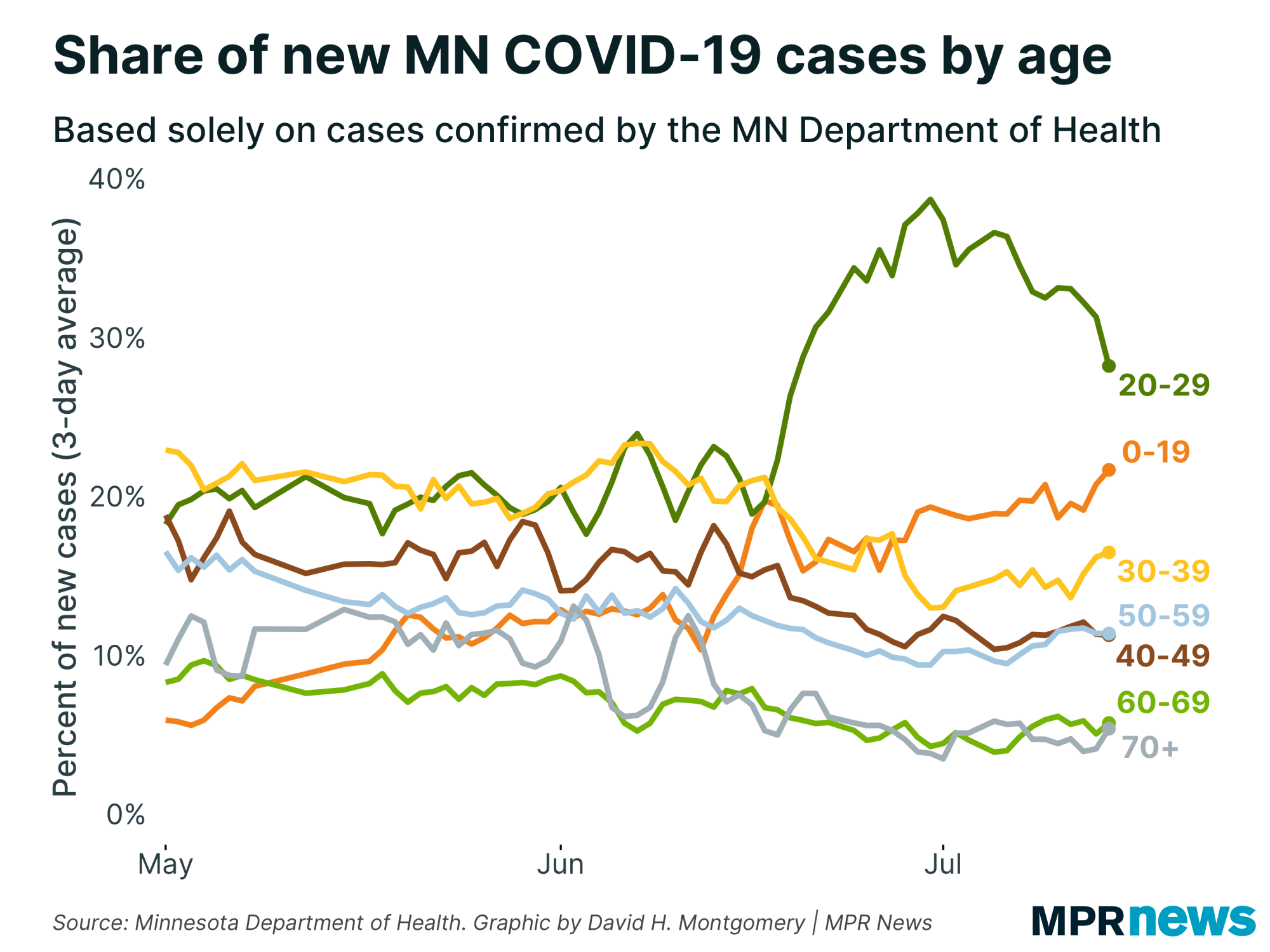 Minnesotans in their 20s now make up the age group with the most confirmed cases, approaching 10,000 since the outbreak started. State Health Commissioner Jan Malcolm said Monday she’s expecting to see a “second and third generation transmission” cascading from those young adult cases in coming weeks.

There’s “no question that our metrics have gone in a less positive direction in the last couple weeks,” Malcolm said. 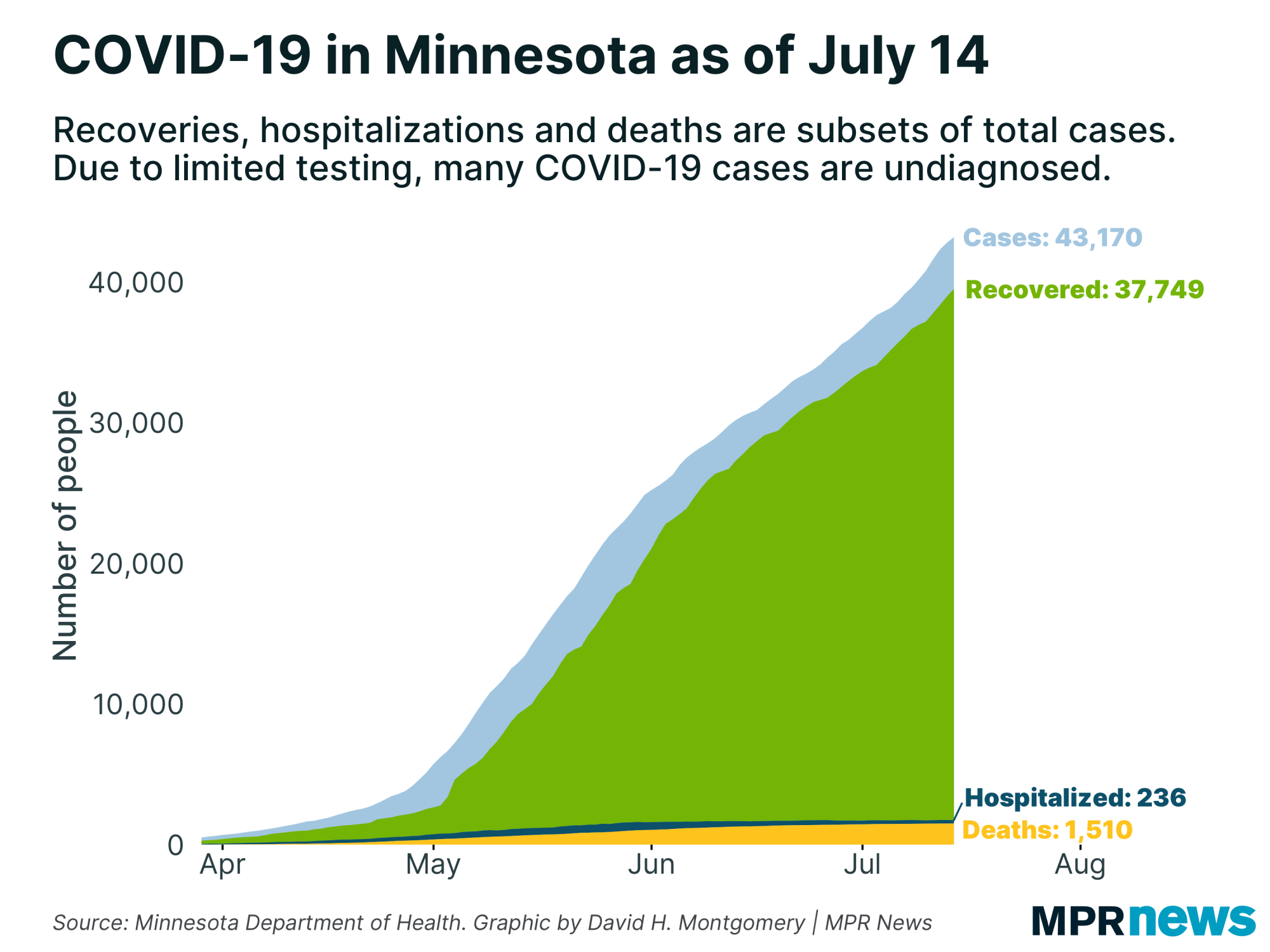 While the jump in young adult cases wasn’t unexpected as bars and restaurants slowly reopened to indoor customers, the fairly steep rise in cases has been surprising, Malcolm said.

While current hospitalization counts in Minnesota remain relatively low, “we are likely going to see increases in hospitalizations because of the ripple effect” of younger people becoming infected, said Kris Ehresmann, the state’s infectious disease director.

Young adults, she added, “don’t live in a vacuum.”

The median age of Minnesotans infected has been trending down in recent weeks and is now below 38 years old. 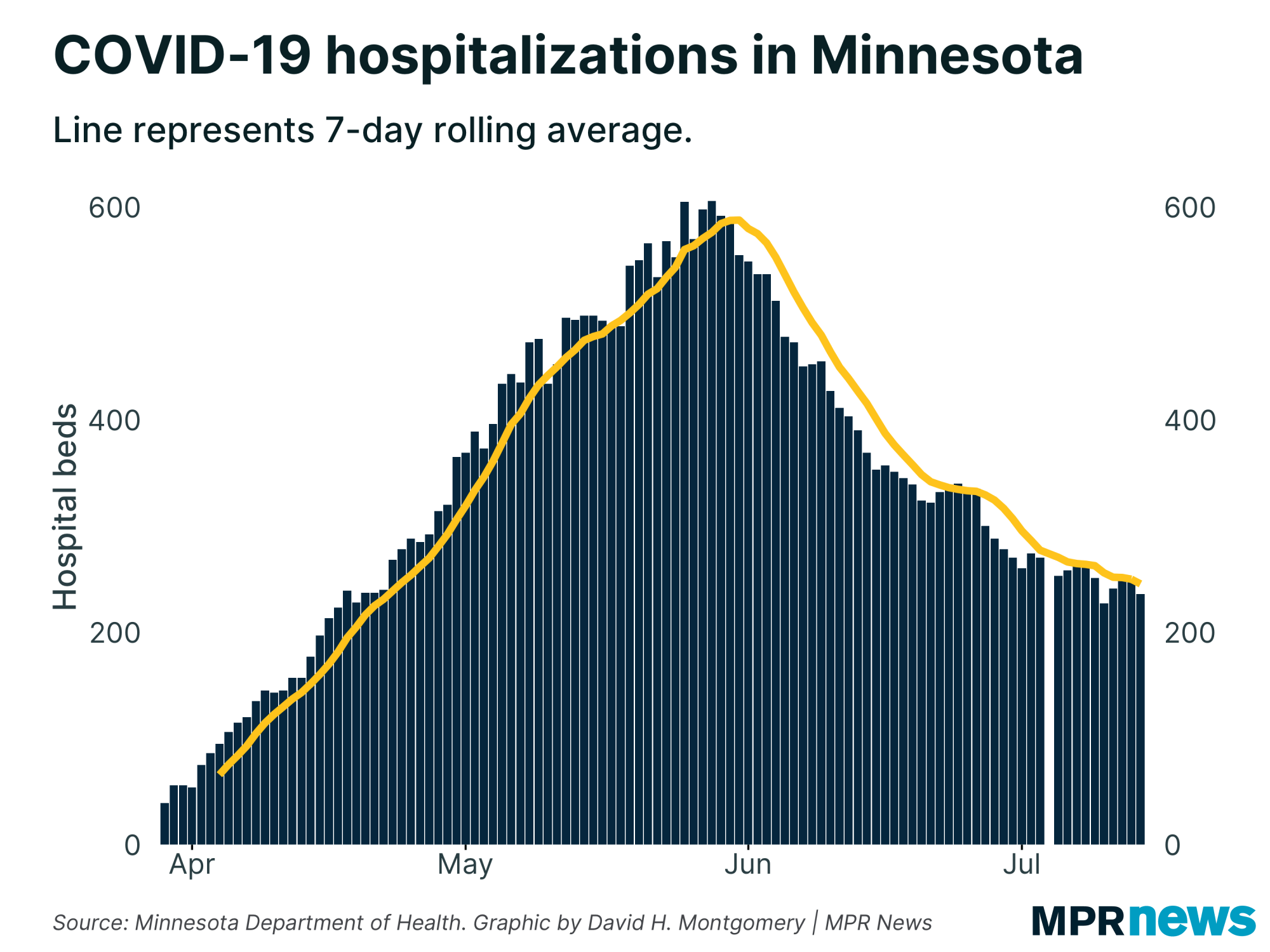 Those numbers and other factors have Gov. Tim Walz considering a statewide order requiring Minnesotans to wear masks in indoor facilities.

Medical groups in Minnesota and the state Health Department continue to support a statewide mask-mandate as the cities Winona, Rochester and Mankato have become the latest cities to make such orders on a local level. Minneapolis, St. Paul and Edina have also mandated mask-wearing in the cities’ public spaces.

Walz on Monday expressed concern that Minnesotans were lagging in efforts to wear masks to stem the spread. However, Senate Majority Leader Paul Gazelka, R-East Gull Lake, warned a statewide mandate would be a mistake.

Malcolm told reporters that Walz was still considering a statewide mask order and asked for research showing the effect of those policies in other states. “He is really looking at all the data from all the angles,” Malcolm added.

That includes Mower County in southeastern Minnesota, where there were 990 confirmed cases as of Tuesday. Mower County is home to Hormel Foods and Quality Pork Processors. Both have been partnering with Mayo Clinic to ramp up employee testing.

Nobles, in southwestern Minnesota, reported 1,697 confirmed cases as of Monday with six deaths. About 1 in 13 people now have tested positive for COVID-19 in the county since the pandemic began, although the count of new cases has slowed considerably in recent weeks.

As of Tuesday, the Health Department reported 595 people have now tested positive in the county, the same as Monday. The county had confirmed three COVID-19 cases in late April.

Cases have also climbed noticeably in Lyon County (359 cases), around a turkey processor in Marshall. Cases the past few weeks have also grown in Cottonwood County (142 cases), home to a pork processing plant in Windom in southern Minnesota, but the counts there have since stabilized. 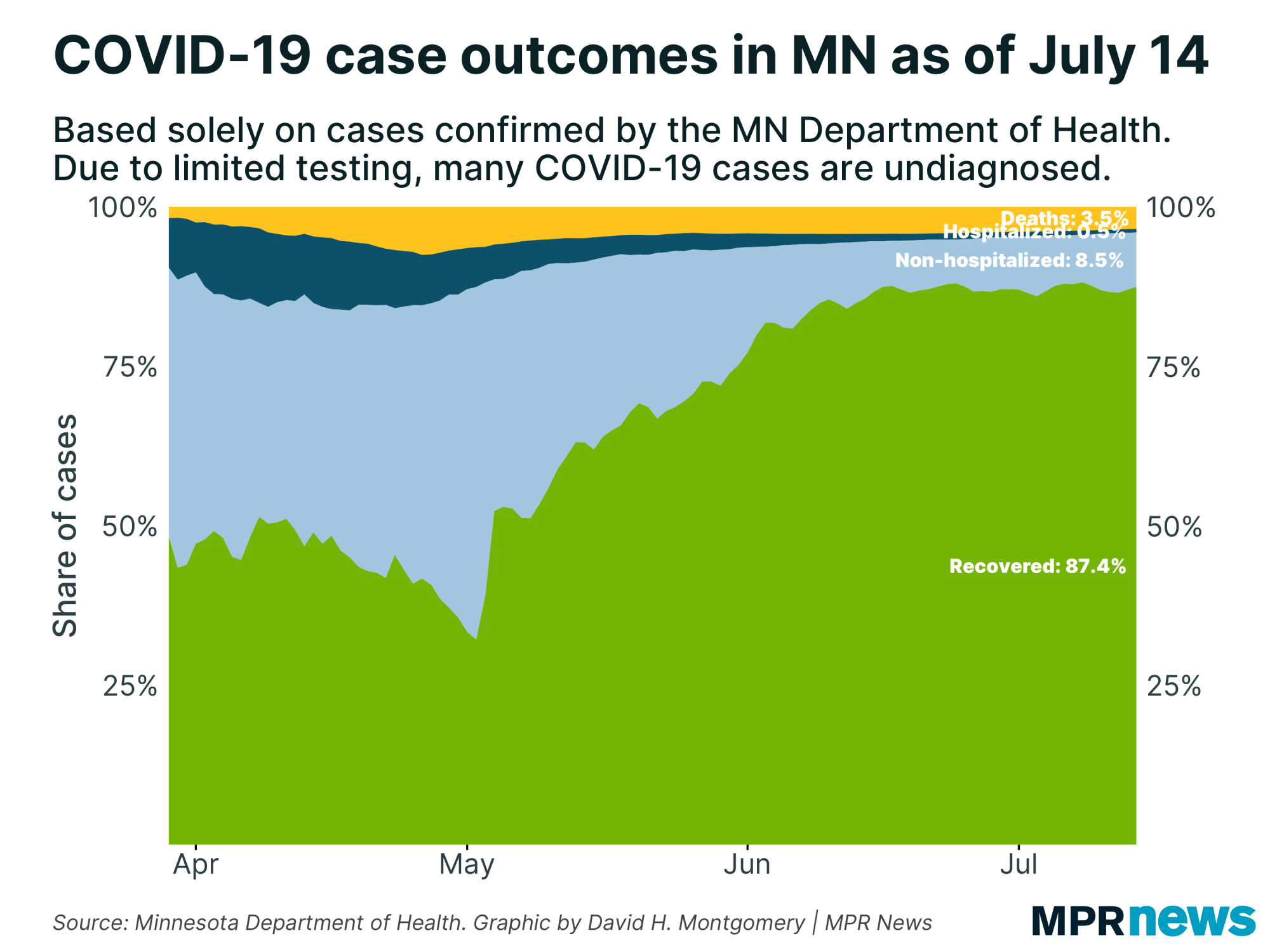 Best Buy, the nation's largest consumer electronics chain, will require customers to wear face coverings at all of its stores nationwide, even in states or localities that don't require them to do so.

The retailer, based in Richfield, Minn, joins a growing but still short list of retailers and restaurants that have instituted mask mandates throughout their chains. Starbucks announced last week that customers who visit its company-owned café locations in the U.S. will be required to wear face coverings. The policy will be in effect on Wednesday as well.

Best Buy Co. said Tuesday it will provide a face covering if a customer doesn’t have one, and small children and those unable to wear one for health reasons may enter without one. It said that customers who have concerns about wearing mask will be able to shop Best Buy via its website and app and choose home delivery or contactless curbside pickup.

The moves come after The Retail Industry Leaders Association, which represents Best Buy as well as Target, Home Depot and other major chains, publicized last week a letter it sent to state governors to mandate store customers to wear face coverings. It said the hodgepodge of rules around the country have created confusion for shoppers and that has lead to conflict between customers and workers trying to enforce store rules.

The National Governors Association said last week that its members are discussing the letter and others like it from different retail groups.

About a third of those were in senior high-rises and multi-unit housing, where residents might be particularly vulnerable to the coronavirus. Others were in locations with limited space that wouldn’t allow social distancing.

All told, there will be voting in 94 buildings across the city — some with multiple precincts in the same location. Of those, about a third are in schools, and two dozen in park buildings. Election officials are preparing to institute social distancing protections at those sites.

The city also has already opened an early voting center on East Hennepin Avenue near Interstate 35 West, and is also encouraging voters to apply to vote by mail so they don’t have to come into contact with poll workers or other voters.

Voters will get postcards about their polling locations for both the Aug. 11 state primary and the Nov. 3 general election.

The University of Minnesota’s Bell Museum is reopening this week.

The museum closed in March in response to the coronavirus outbreak, but will reopen Thursday through Sunday for members, and next Thursday to the general public.

The natural history museum will have limited hours, Thursdays through Sundays, from 10 a.m to 4 p.m. each day. Masks and reservations are required, and the planetarium isn’t open yet.

On the North Shore, the iconic Split Rock Lighthouse, closed since mid-April, is reopening Wednesday. Timed tickets will be available online, with some available for walk-ups. The interior of the lighthouse and historic Keeper’s House will be off-limits. Tickets have been reduced to $8 to reflect the limited building access.

Other major museums, including the Science Museum, the Children’s Museum and the Minnesota History Center, remain closed amid the pandemic.

Duluth joins growing list of Minnesota cities to require masks: The Duluth City Council unanimously approved an emergency ordinance Monday night requiring face coverings in many indoor spaces. In the absence of a statewide requirement, many of the state’s largest cities have passed similar measures.

3M developing paper-based coronavirus test that could give results in minutes: Maplewood-based 3M says it is working with the Massachusetts Institute of Technology on a point-of-care test for the COVID-19 that could make diagnosing infections nearly as simple as a home pregnancy test.

To read the original articles and see related COVID-19 reporting, follow this link to the MPR News website.  https://www.mprnews.org/story/2020/07/15/latest-on-covid19-in-mn