Latest on COVID-19 in MN: More than 800 new cases reported in state Nurse Amanda Hitchings uses a swab to take a sample for COVID-19 testing at a curbside collection facility on May 6 at St. Cloud Hospital.  Photo: Dave Schwarz | St. Cloud Times

The number of confirmed COVID-19 cases in Minnesota jumped by more than 800 on Saturday — the biggest single-day increase in seven weeks.

Saturday's update from the Minnesota Department of Health reported 806 new, confirmed cases. That's the second-greatest single-day total on record in the state, behind 840 cases reported on May 23 — though testing has increased greatly since late May. 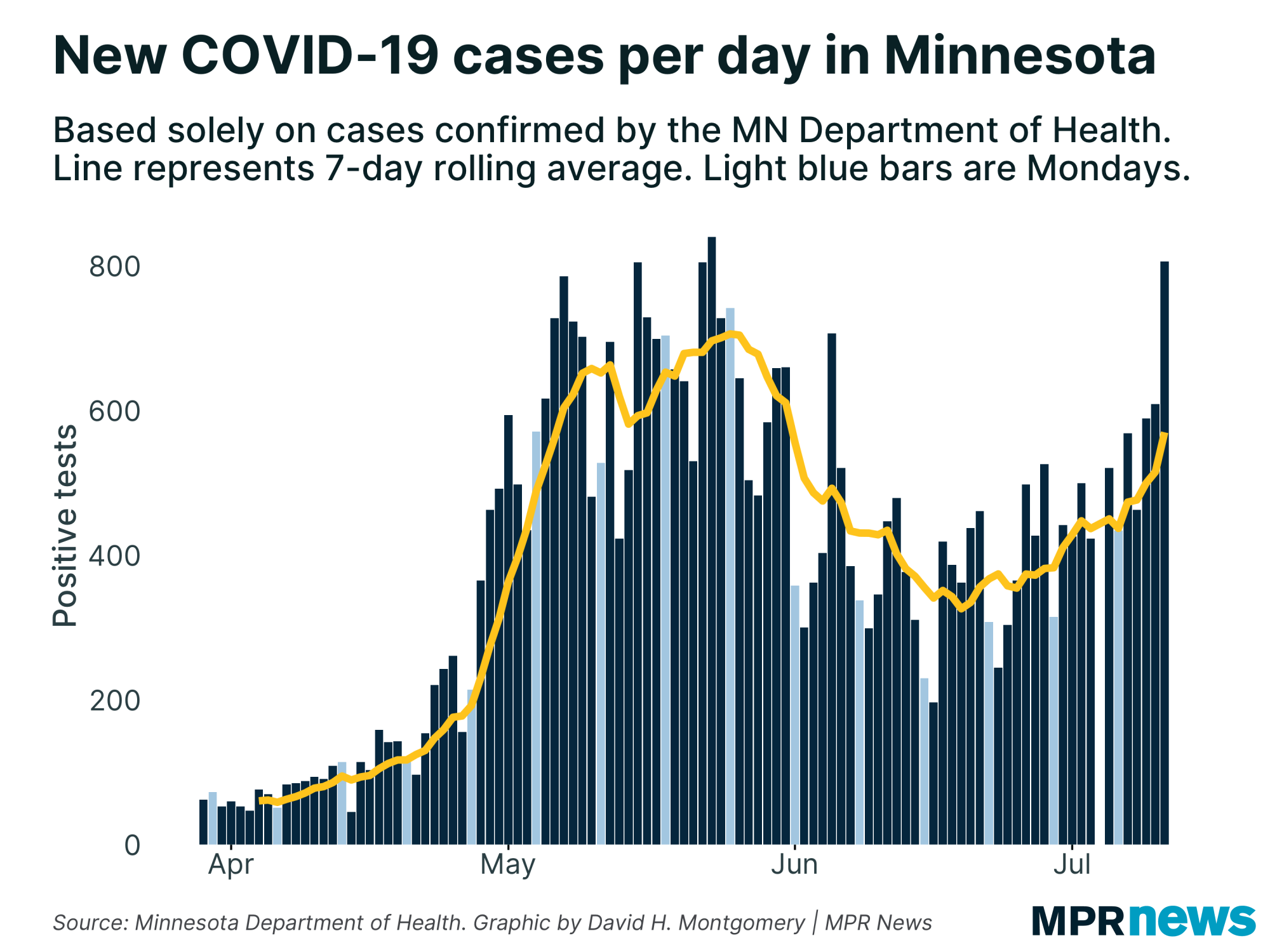 The number of people hospitalized with COVID-19 in Minnesota increased to 241 on Saturday, up from 227 in Friday's report — though still lower than the 251 reported on Thursday. The number of those patients being treated in ICUs dropped from 124 to 121 in Saturday's report.

Around 5 percent of Minnesota’s more than 16,000 newly reported tests were positive Saturday. That’s a metric that health officials watch closely to see how widespread the disease is. The 5 percent figure is an increase from rates between 2.5 and 4 percent in mid June, when cases were declining. But it’s far below the state’s peak of more than 16 percent in May. 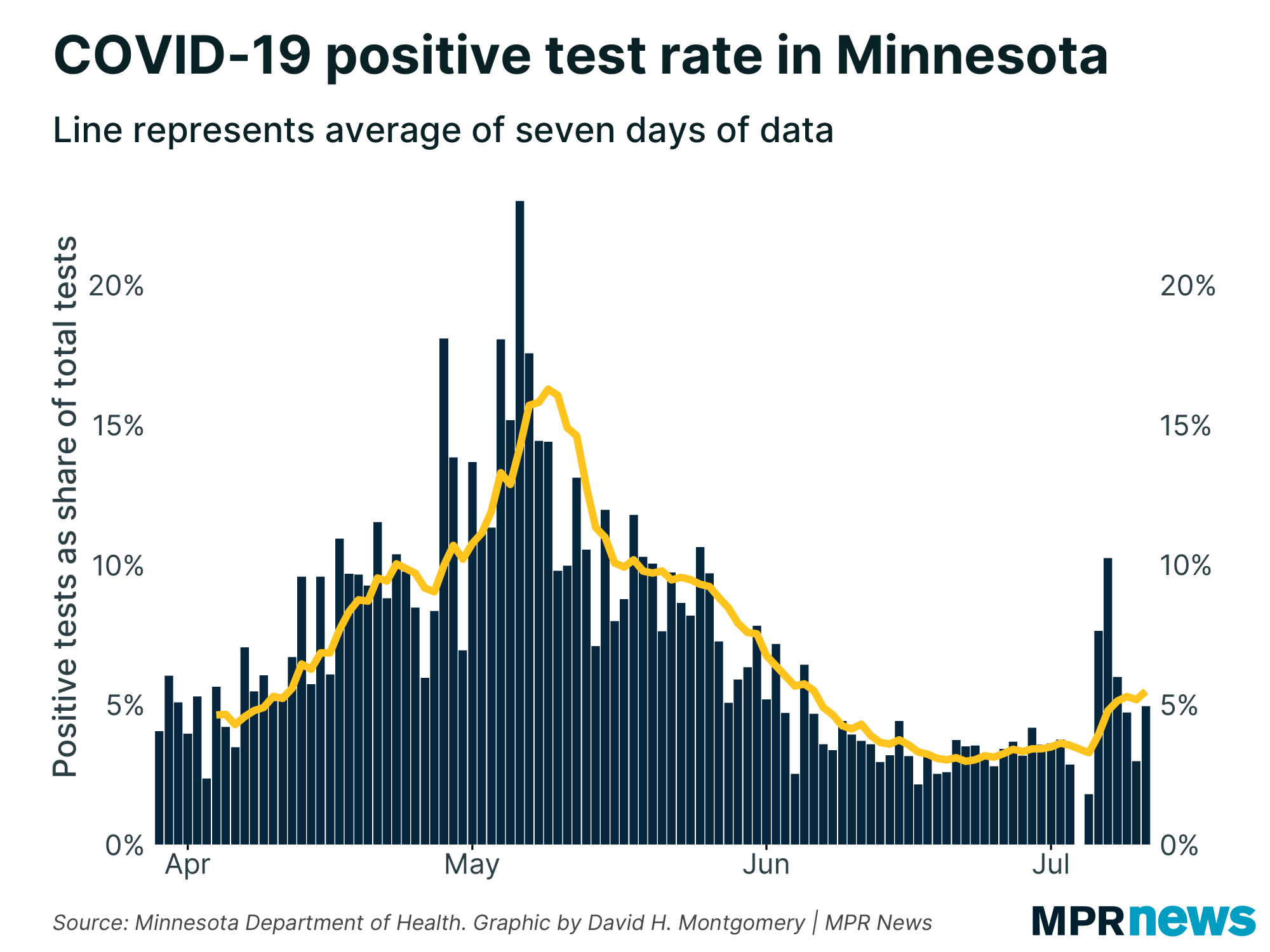 Cases have been trending upward in Minnesota for several weeks, in all parts of the state — but especially in the Twin Cities suburbs. Minnesota now has nearly 1,500 more active COVID-19 cases than it did in mid-June, according to data released Friday.

Earlier this week, for the first time, the suburban counties of Dakota, Washington, Anoka, Scott and Carver had about as many new cases per capita as Hennepin and Ramsey counties.

Asked Friday about the growing presence of COVID-19 cases in the suburbs, Kris Ehresmann, the state’s infectious disease director, said that while officials are seeing increases tied to bars and restaurants reopening and to house party activity in places like Edina, there was no single “hot spot answer” explaining the suburban surge. 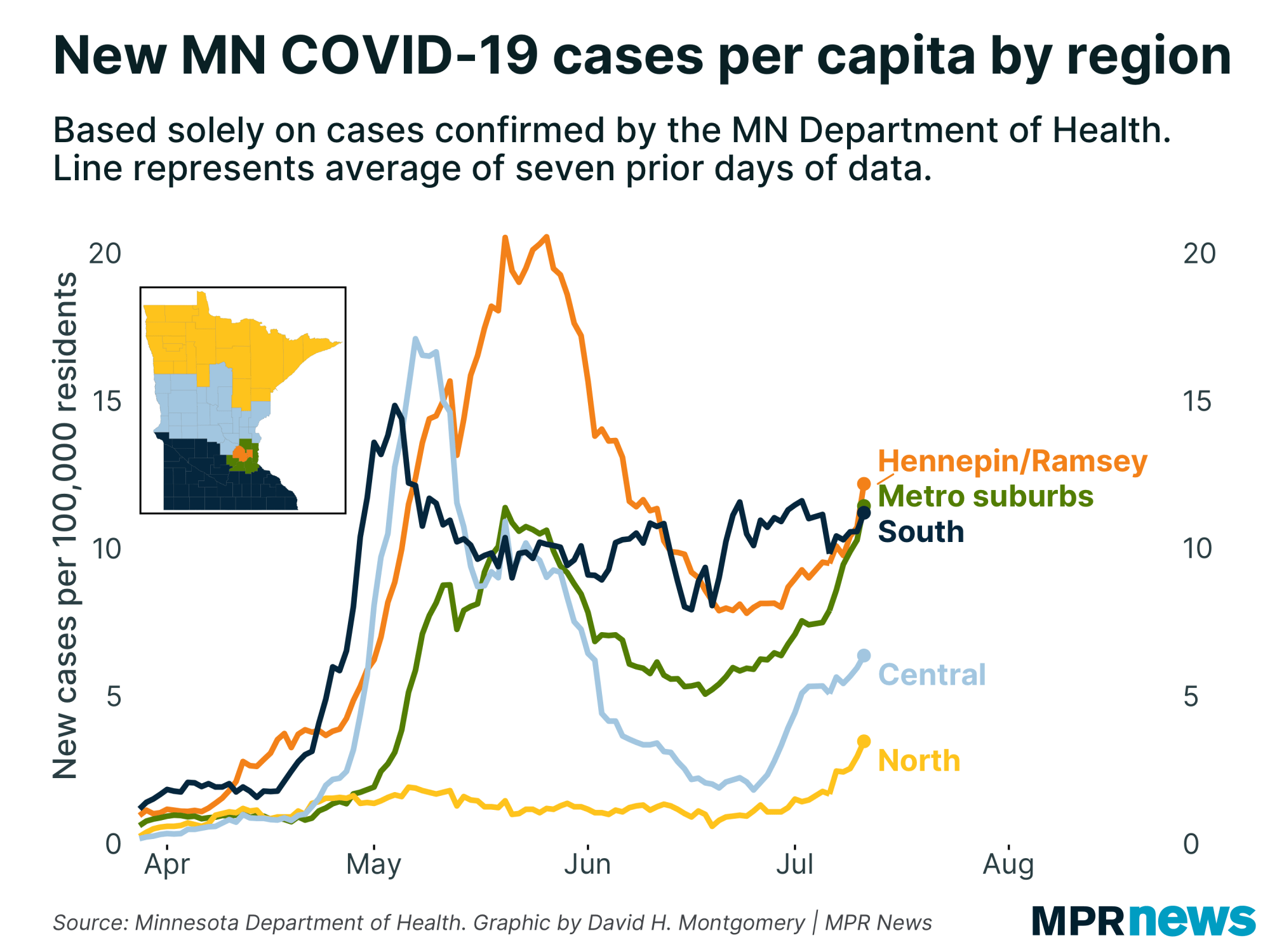 Also Friday, Ehresmann acknowledged that national laboratories were seeing delays in getting test results back to people, but she implored Minnesotans with COVID-19 symptoms to stay home and wait for the results before going out in public and possibly infecting others.

She also noted that the Health Department is getting reports of some people seeking out COVID-19 testing every couple of days.

“Testing is not a substitute for masking and social distancing,” Ehresmann told reporters. While health officials are encouraging people to get a test, “getting tested over and over again is not necessarily an appropriate use of that resource.”

Winona, Rochester and Mankato this week became the latest Minnesota cities to order citywide mask mandates to help slow the spread of the coronavirus.

That includes Mower County in southeastern Minnesota, where there were 974 confirmed cases as of Friday. Mower County is home to Hormel Foods and Quality Pork Processors. Both have been partnering with Mayo Clinic to ramp up employee testing. 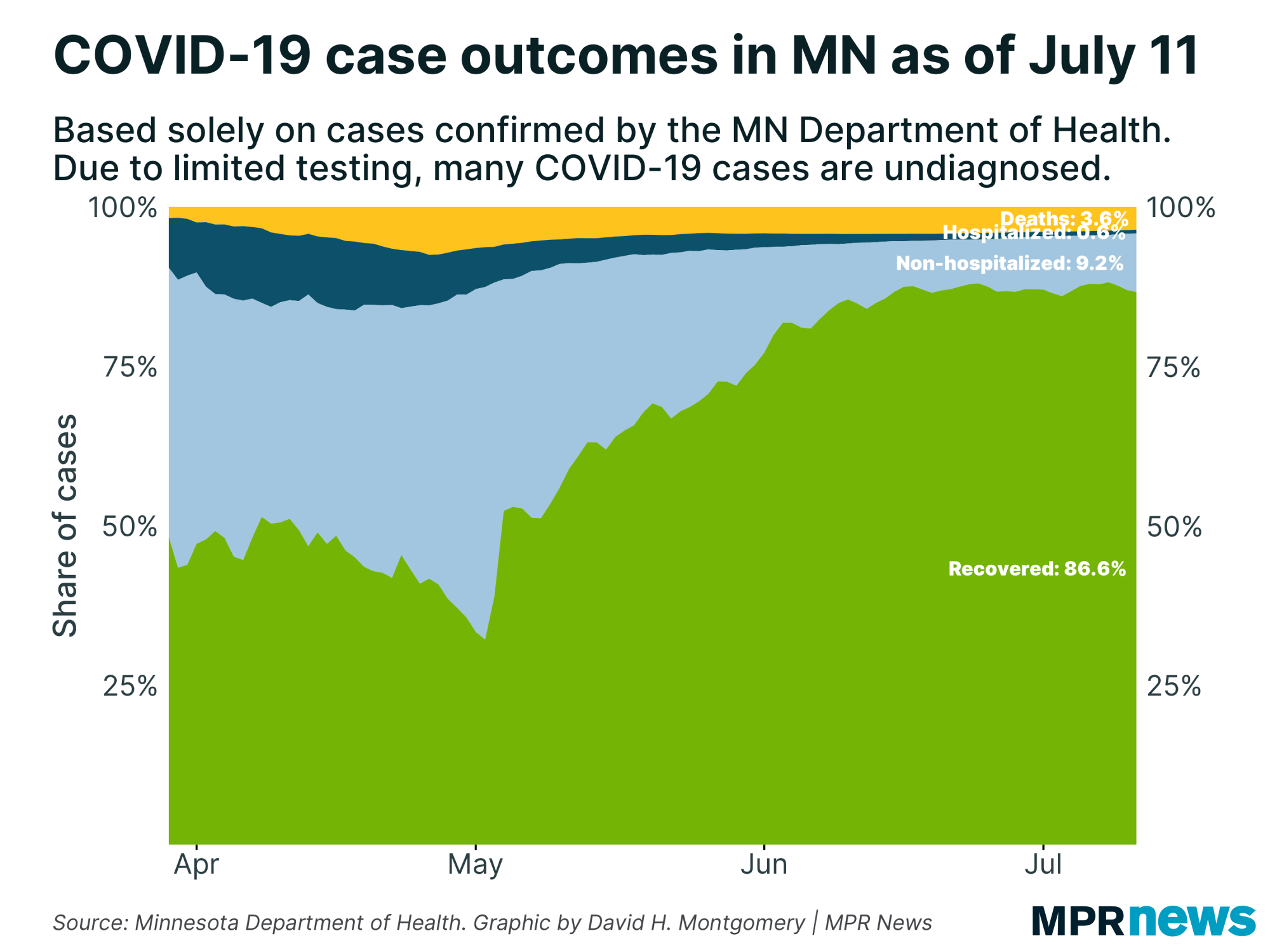 Nobles, in southwestern Minnesota, reported 1,676 confirmed cases Friday with six deaths, the same as Thursday. About 1 in 13 people now have tested positive for COVID-19 in the county since the pandemic began, although the count of new cases has slowed considerably in recent weeks.

As of Friday, the Health Department reported 587 people have now tested positive in the county. The county had confirmed three COVID-19 cases in late April.

Cases have also climbed noticeably in Lyon County (332 cases), around a turkey processor in Marshall. Cases the past few weeks have also grown in Cottonwood County (138 cases), home to a pork processing plant in Windom in southern Minnesota, but the counts there have since stabilized.

To read the original articles and see related COVID-19 reporting, follow this link to the MPR News website.  https://www.mprnews.org/story/2020/07/11/latest-on-covid19-in-mn
News