Heather Peters, a lab technologist, works in the extracting of RNA from test samples in the Mayo virology lab at the Mayo Clinic Superior Drive facility in Rochester, Minn., in March.
David Joles | AP file

Minnesota health officials on Friday reported a mix of hopeful and concerning data on COVID-19: Even as new deaths hold steady in single digits and the total number of current hospitalizations dips to near mid-April levels, the daily count of new cases continues to jump — with the Twin Cities suburbs leading the climb.

The Health Department said five more Minnesotans had died from the disease, putting the toll at 1,495 since the pandemic began. The number of people currently hospitalized (224) fell significantly from Thursday even as those needing intensive care (124) inched up.

Minnesota now has nearly 1,500 more active COVID-19 cases than it did in mid-June. Yet the share of active hospitalizations — a closely watched metric as officials try to manage the spread of the disease so it doesn’t overwhelm the health care system — has never been lower.

The daily count of confirmed cases, however, is on the upswing with 609 new cases recorded Thursday.

The most dramatic recent increases are coming in the suburban counties around the Twin Cities — Dakota, Washington, Anoka, Scott and Carver. For the first time, they now have about as many new cases per capita as Hennepin and Ramsey counties. 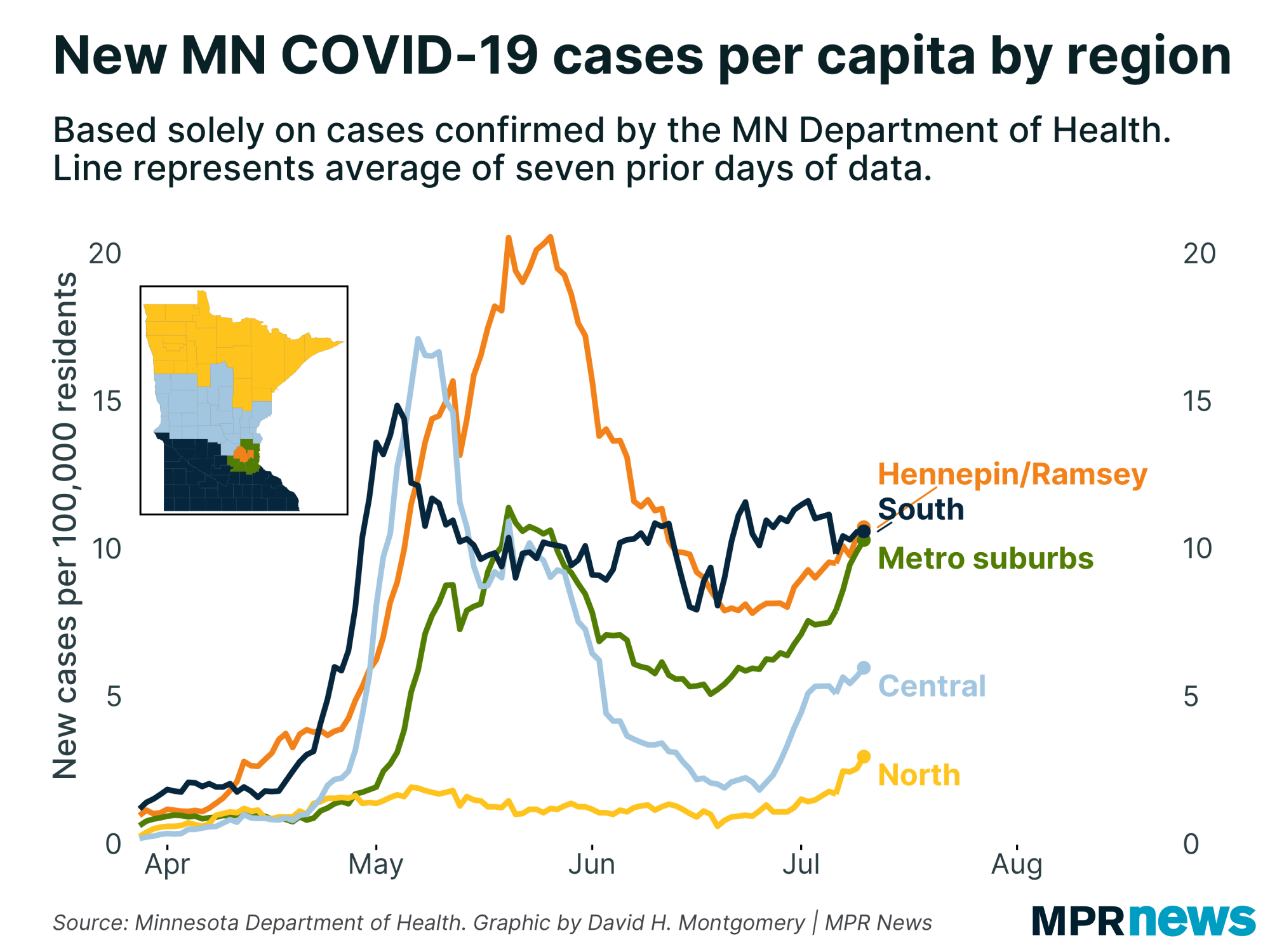 Asked on Friday about the growing presence of COVID-19 cases in the suburbs, Kris Ehresmann, the state’s infectious disease director, said that while officials are seeing increases tied to bars and restaurants reopening and to house party activity in places like Edina, there was no single “hot spot answer” explaining the suburban surge.

Earlier this week Ehresmann warned Minnesotans against holding “COVID parties” as a way to become infected with the coronavirus in a convenient way.

The behavior of young adults in the pandemic has become a central concern among state officials recently as they investigate outbreaks tied to bars and other recently opened indoor social spaces. 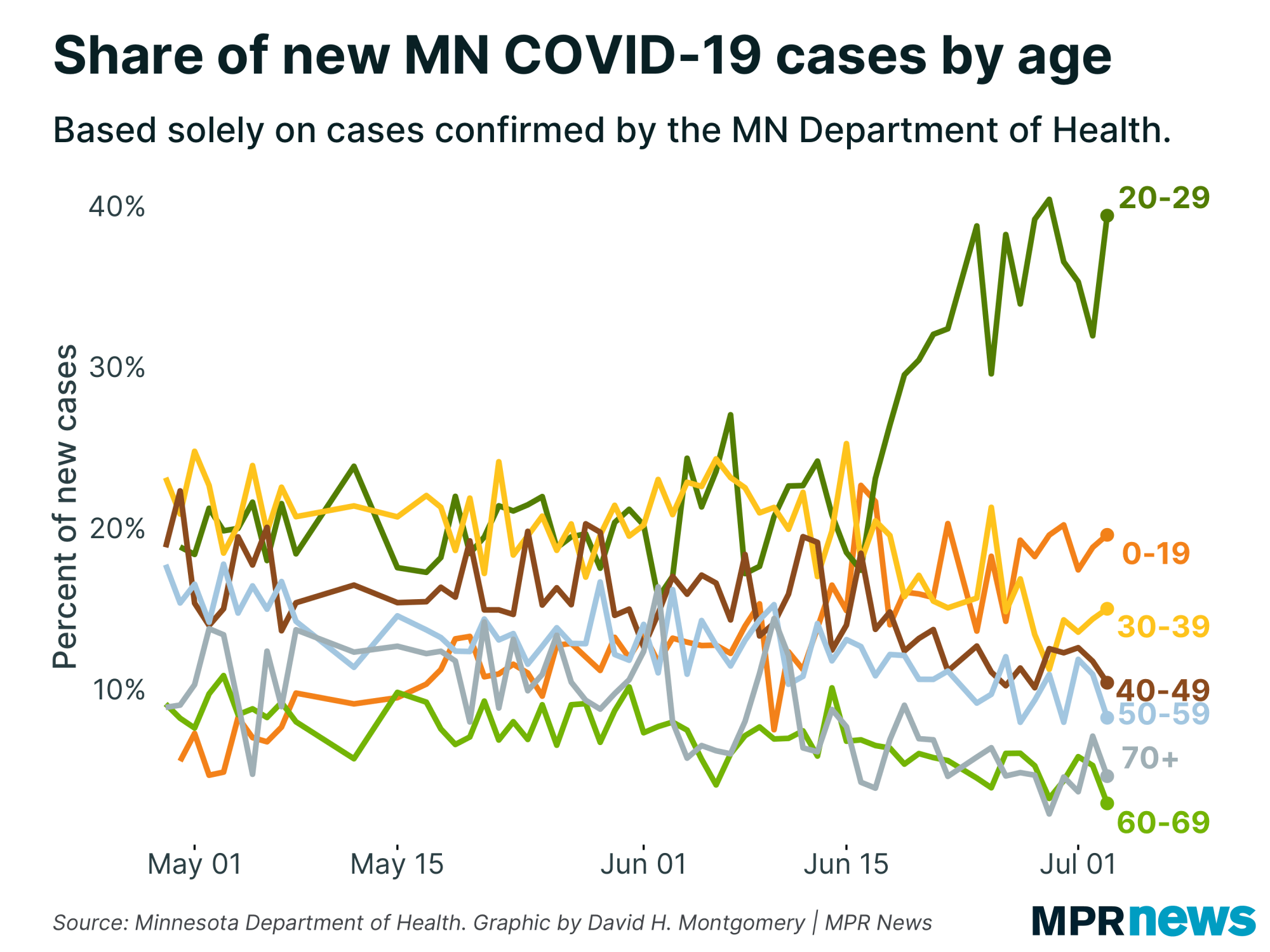 As of Friday, Minnesotans in their 20s now make up the largest age group of confirmed cases — more than 9,200 since the pandemic began — with their numbers accelerating in recent weeks since bars were allowed conditionally to open their indoor spaces. 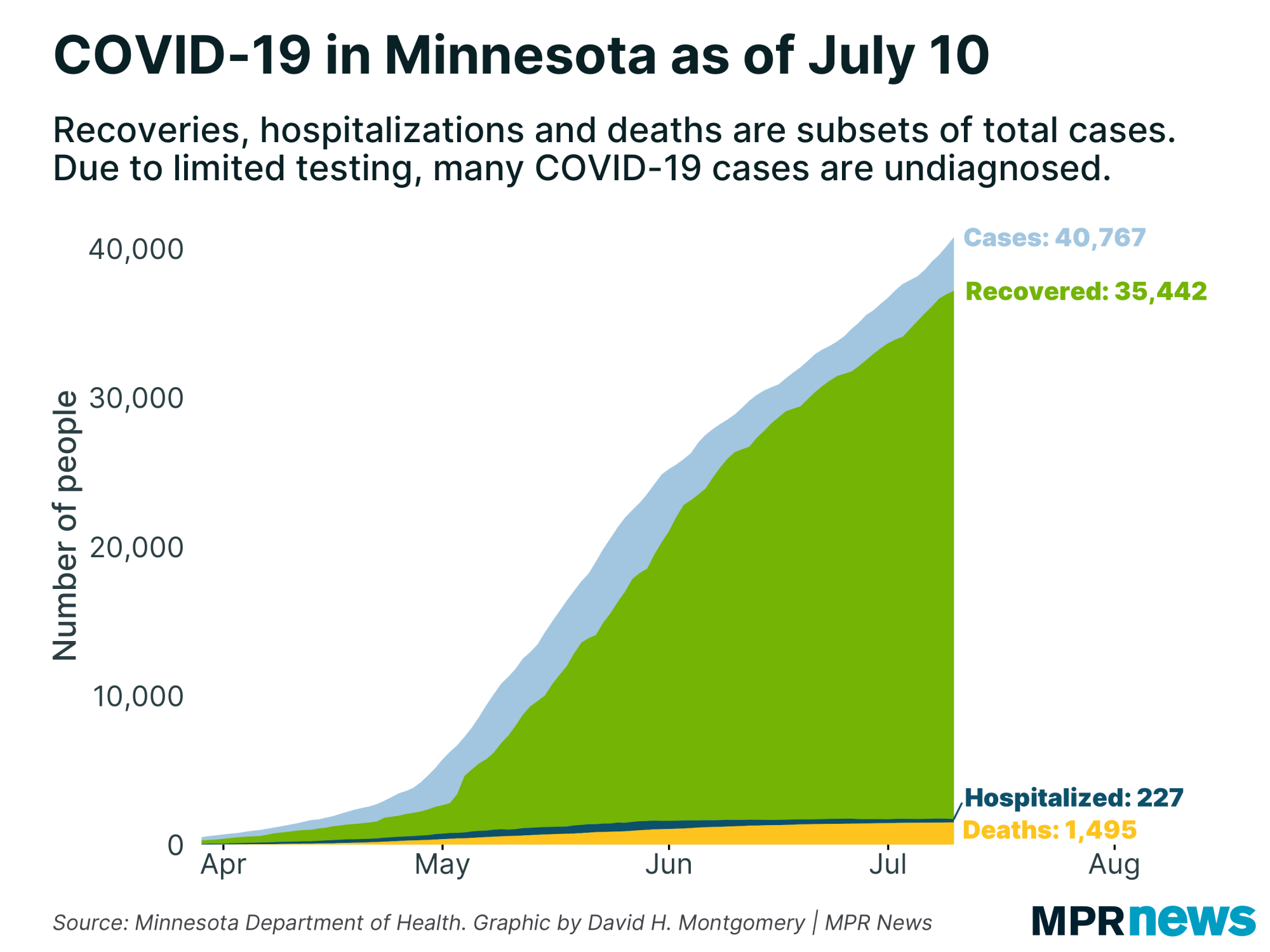 Winona, Rochester and Mankato this week became the latest Minnesota cities to order citywide mask mandates to help slow the spread of the coronavirus.

The state’s now recorded 40,767 positive cases. About 87 percent of those infected have recovered to the point they no longer need to be isolated.

Of those who’ve died, nearly 80 percent were living in long-term care or assisted living facilities, nearly all had underlying health problems.

The number of confirmed cases and the rate of positive tests for the disease have risen noticeably the past few days, even as deaths and hospitalizations plateau.

On Wednesday, Ehresmann said the recent increase in the positive test rate may be due to focused testing in areas suspected of having significant community spread of the virus.

On Friday, Ehresmann acknowledged that national laboratories were seeing delays in getting test results back to people, but she implored Minnesotans with COVID-19 symptoms to stay home and wait for the results before going out in public and possibly infecting others.

She also noted that the Health Department is getting reports of some people seeking out COVID-19 testing every couple of days.

“Testing is not a substitute for masking and social distancing,” Ehresmann told reporters. While health officials are encouraging people to get a test, “getting tested over and over again is not necessarily an appropriate use of that resource.”

That includes Mower County in southeastern Minnesota, where there were 974 confirmed cases as of Friday. Mower County is home to Hormel Foods and Quality Pork Processors. Both have been partnering with Mayo Clinic to ramp up employee testing. 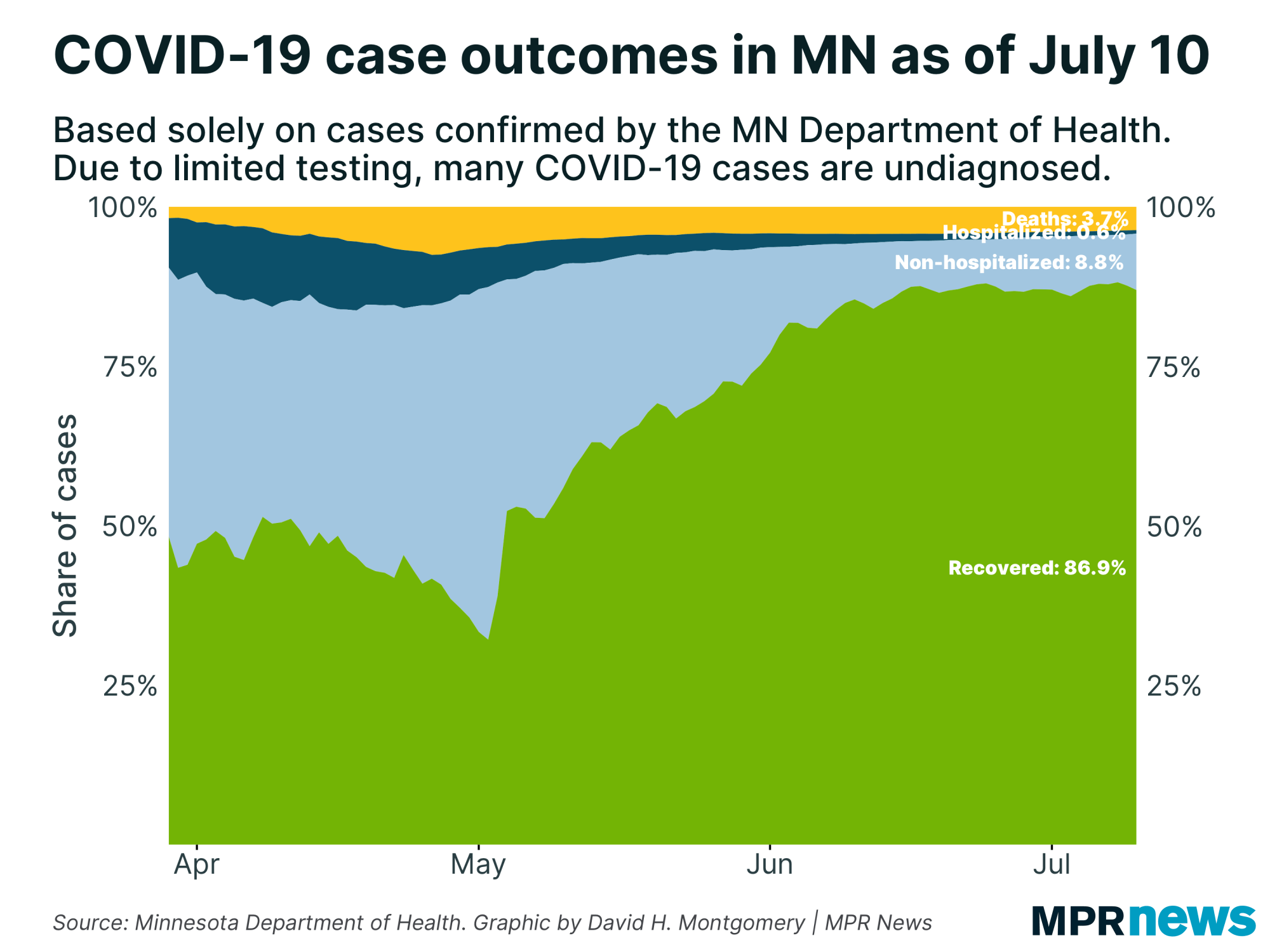 Nobles, in southwestern Minnesota, reported 1,676 confirmed cases Friday with six deaths, the same as Thursday. About 1 in 13 people now have tested positive for COVID-19 in the county since the pandemic began, although the count of new cases has slowed considerably in recent weeks.

As of Friday, the Health Department reported 587 people have now tested positive in the county. The county had confirmed three COVID-19 cases in late April.

Cases have also climbed noticeably in Lyon County (332 cases), around a turkey processor in Marshall. Cases the past few weeks have also grown in Cottonwood County (138 cases), home to a pork processing plant in Windom in southern Minnesota, but the counts there have since stabilized.

MN will borrow from feds to sustain jobless aid

Minnesota will soon borrow from the federal government to make sure unemployment benefits keep flowing to those who qualify.

Many states are doing the same, given the depth and duration of the COVID-19 pandemic. Minnesota is expected to have to tap into federal resources within the week.

“Six hundred thousand people have received benefits and over $5 billion. The previous record in a given year was 250,000 people and $2.8 billion,” Jim Hegman, the state’s unemployment director, told a Minnesota House committee Thursday. “So we did in four months what in the midst of the Great Recession we didn’t even do in a full year.”

He said Minnesota last borrowed to pay benefits during the recession that began in 2008.

It’s likely that the borrowing will be repaid using standard taxes assessed on businesses, which feed the fund in the first place. The money comes to the state at little or no interest, and Congress will face pressure to forgive the loans given how widespread the financial fallout from the pandemic has been.

A pending proposal would supply up to six more months of benefits to people laid off from a mining or a mining industry support job. That’s if they’ve exhausted their standard benefits before operations halted by COVID-19 pandemic or other disruptions can resume.

State Rep. Julie Sandstede, DFL-Hibbing, said the extension would prevent Iron Range towns from being hollowed out during the current dip.

“Unfortunately we’re facing a devastating trifecta in the downturn of taconite, timber and tourism,” she said.

Most of northern Minnesota’s mines have slowed down or been temporarily shut with demand for goods down.

The bill could come up in a special session expected to be called for next week.

In Bemidji, the hospital is prepared for COVID-19 — as county cases see an uptick: In Bemidji, Sanford Medical Center has worked for months to prepare for COVID-19. A recent spike in cases among young people now has the hospital waiting — and worrying.