Illustration by Yao Xiao/Make Me a World

Ashima Shiraishi, 19, is one of the most talented rock climbers in the world. And she'd like to let you in on a rather unglamorous secret: "Most of climbing, it's you just falling," she says. "Every time you go back at it, you improve slightly."

Shiraishi is the author of a new book called How to Solve a Problem: The Rise (and Falls) of a Rock-Climbing Champion — she says it's about how she approaches all kinds of obstacles.

"Everyday struggles I kind of face the same way that I do when I keep on falling and falling on a rock climb," she explains.

The word "problem" in the title has a double meaning — that's what climbers call routes or boulders.

"What drives us and motivates us to keep doing it is the endless problems there are in the world," Shiraishi says. "And they keep getting harder and harder as we improve in rock climbing." 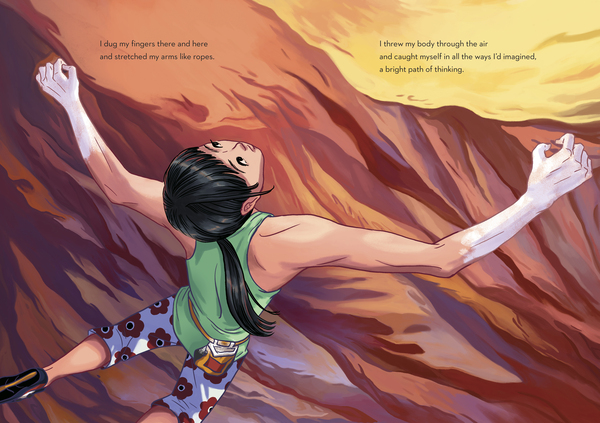 "I dug my fingers there and here and stretched my arms like ropes. I threw my body through the air and caught myself in all the ways I'd imagined, a bright path of thinking."
Illustation: Yao Xiao/Make Me a World

How to Solve a Problem is illustrated by Yao Xiao, who had never been rock climbing before taking on this project.

"I did have to research very, very heavily into rock climbing actions to make sure that the poses are accurate," Xiao says.

And she got plenty of guidance from Shiraishi, too. "Sometimes she'd say: It's not possible to do this, like, you can't get your foot up that high," Xiao says.

Accuracy was important to the young author.

"I wanted to be very realistic to what I do as a climber," Shiraishi says. For her, the book is about "showing this girl as being fierce physically and mentally and just facing all these boulders and rocks, not afraid of what others have to say about it."

The illustrations range from realistic to fantastical — as Ashima goes back and forth between climbing a real-life rock and an imaginative pile of shapes — an outcropping that looks like a train, a slab in the shape of a constellation, a toehold like the dot of a question mark. 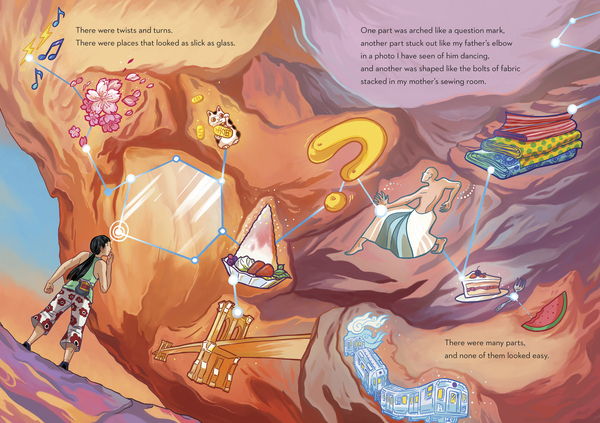 "There were twists and turns. There were places that looked as slick as glass. One part was arched like a question mark, another part stuck out like my father's elbow in a photo I have seem of him dancing, and another was shaped like the bolts of fabric stacked in my mother's sewing room. There were many parts, and none of them looked easy."
Illustration: Yao Xiao/Make Me a World

Xiao says her job was to illustrate a mental process. Her goal was to depict "the boulders in her life, and then her process of solving these problems as puzzles."

"You get that feeling of being outside and climbing, but there are also pages of that visual puzzle of Ashima's imagination," Xiao adds.

Shiraishi says she hopes the takeaway for her readers is that "you've got to stand up after each time that you fall down."

Remember, most of climbing is falling, Shiraishi says — but "one day you get to the top of it, which is the greatest feeling." 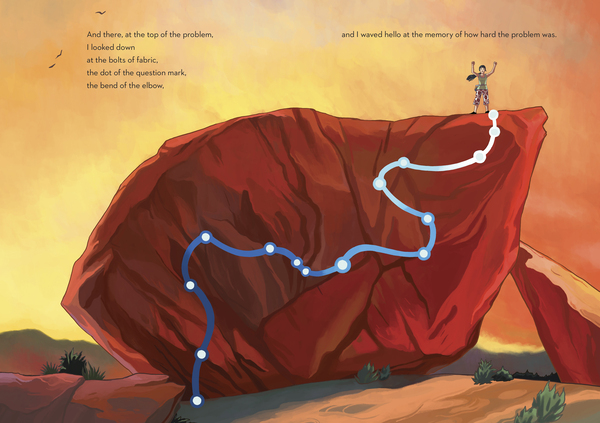 "And there, at the top of the problem, I looked down at the bolts of fabric, the dot of the question mark, the bend of the elbow, and I waved hello at the memory of how hard the problem was."  Illustration:  Yao Xiao/Make Me a World

To hear the audio version of this story and see related arts and culture reporting, follow this link to the MPR News website.  https://www.mprnews.org/story/2020/07/05/npr-this-book-teaches-kids-how-to-solve-a-problem-like-a-ro...
Arts+Culture