A woman, who asked to remain anonymous, stands on a south Minneapolis sidewalk on Wednesday. Employment lawyers in Minnesota say they're hearing from workers who say they have been retaliated against for raising safety concerns about workplace conditions — or who have hesitated to speak up because they fear retaliation. Photo: Evan Frost | MPR News
By Catharine Richert of Minnesota Public Radio News - July 6, 2020

Back in March, when the first cases of coronavirus in Minnesota started to trickle in to the news, people with desk jobs made an exodus to their home offices.

Now that businesses are slowly reopening, some of those people are being asked to return to their offices to work.

But that’s left some workers, uncomfortable with the potential coronavirus exposure that a return might bring, caught between keeping their jobs — or speaking up and risk losing their work in the middle of a pandemic.

And employment attorneys say rules around workplace safety in the pandemic are creating unprecedented challenges for workers and employers alike.

One woman who found herself navigating this gray area was a project manager for Superhuman, a small branding firm in South Minneapolis.

The woman said working from home was easy: It just meant lots of phone calls, Zoom meetings and Slack chats.

“We had all the tools. It really wasn't a problem,” she said. “It was just missing being together in person.”

In fact, she said, she was more productive than ever, working overtime and bringing in additional work for the firm.

But in mid-May when Gov. Tim Walz announced the first phase of the state's limited reopening, the company’s CEO told employees they should prepare to come back to the office — if they wanted to — after Memorial Day.

“I truly believe we work better together in person,” he wrote in a Slack message to his staff, saying working from office wasn’t mandatory.

Still, the project manager was alarmed. The company’s office space is cramped, with an old ventilation system, she said, and she worried that the coronavirus would spread quickly among staff if just one person brought it in. She believed that, in inviting employees back to the office, the company was violating the state’s executive order that insists that people work from home if they can.

“This order is in place because we shouldn't be making our own decisions about whether we want to come in or not,” she said she told her supervisor. “This is for public health. It's not for us to take our chances if we want to."

The woman said her bosses told her it was because of performance issues, but she disputes that. She has asked not to be named, because she’s now looking for work — and fears the circumstances around her separation from her last job could damage her chances of finding a new one.

In an email, Superhuman’s CEO Van Horgen declined to comment specifically on the project manager’s departure.

He said his firm hasn’t taken any actions in response to any single employee's decision about returning to the office. He added that the company’s plans to reopen are not fully implemented.

The situation is something employment lawyers in Minnesota say they're seeing a lot of since the pandemic hit: Workers who say they have been retaliated against for raising safety concerns about workplace conditions — or those who hesitate to speak up because they fear retaliation.

It’s a tricky tightrope for employers and employees, because both need to balance safety with keeping the economy going, said Brian Rochel, an employment attorney with the Minneapolis firm Teske Katz Kitzer & Rochel.

“We’re wrestling with a lot of counter-dynamics at play. I don’t think this is a one-way street, where you can place 100 percent of the burden on employers in trying to make it so a work environment meets the needs, wants and demands of 100 percent of the workers,” he said. 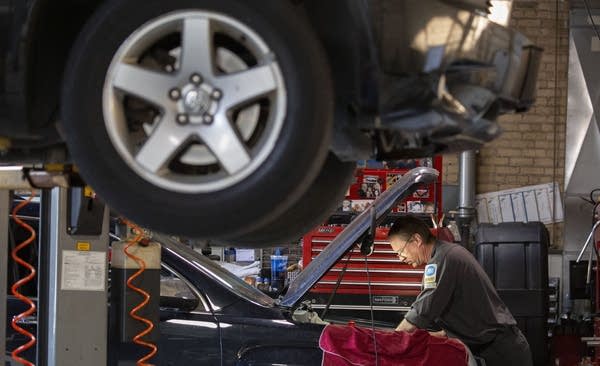 A man works on a timing chain April 17. The Minnesota Occupational Safety and Health Administration has registered 639 workplace safety complaints, and little more than half — a significant proportion — are related to the coronavirus.   Photo: Christine T. Nguyen | MPR News file

This year, the Minnesota Occupational Safety and Health Administration has registered 639 workplace safety complaints, and little more than half — a significant proportion — are related to coronavirus.

Meanwhile the state's Department of Human Rights as of mid-June received 174 calls about potential violations of the governor’s work at home order, and has informed 30 businesses that they are violating it.

"This entire dynamic is so unprecedented,” said Rochel. He said it's unclear how the courts will interpret the state's executive orders and federal legislation meant to protect workers because the pandemic is still in its infancy.

Rochel says the state has made clear that workers who raise concerns about workplace safety should not face retaliation because they are protected under the state's whistleblower act.

But he adds it's no guarantee that people won't lose their jobs.

“What we tend to see when people report things that are legally protected is a lot of retaliation,” he said.

Rochel says his office has been peppered with calls from people who want to know whether they have a right to raise concerns about mask-wearing policies and physical distancing strategies at work.

But Rochel says most workers don’t say anything because they decide that keeping their job is more important right now than raising concerns.

“Do I want to be looking for a job right now in this economy? That's a scary thought,” he said.

That's likely a function of inequities that already exist in the system, said Emma Denny, an employment lawyer at Halunen Law.

That’s the case the Minneapolis project manager repeatedly made to her bosses before she lost her job at the end of May. Her company told her that they had planned to let her go before the pandemic hit, citing performance concerns. She said those concerns were months old.

The project manager has hired a lawyer and is hoping for a financial settlement with Superhuman.

And as a single mom of two kids, she’s looking for a new job.

"We're all in the middle of a pandemic. The job market is terrible,” she said. “It's going to be really difficult for me to find a new job. There's just not much out there."

To read the original story and see related COVID-19 reporting, follow this link to the MPR News website.  https://www.mprnews.org/story/2020/07/06/as-state-continues-to-reopen-some-office-workers-fear-covid...