Split Rock Lighthouse State Park is always a popular destination in the summer.

Its majestic rock cliffs and historic lighthouse overlooking Lake Superior draws thousands of visitors every year. Its campground fills up most summer weekends.

But park manager Katie Foshay said this year, more people than usual are flocking to the park for day visits, too — in part, she suspects, because other summertime activities and travel have been canceled due to COVID-19.

"We are definitely seeing an increase in numbers,” she said. “I think with all of the major events like concerts and sporting events and school kids functions not going on, that people are just spending more time outside."

Split Rock lighthouse itself isn't open for visitors yet, so Foshay said people are hiking to waterfalls or hanging out on Pebble Beach along Lake Superior. State parks across Minnesota are seeing an increase in visitors this season, as people seek outdoor activities during the COVID-19 pandemic.

South of Split Rock, Banning State Park, along the Kettle River near Sandstone, has seen a similar spike in visitors. 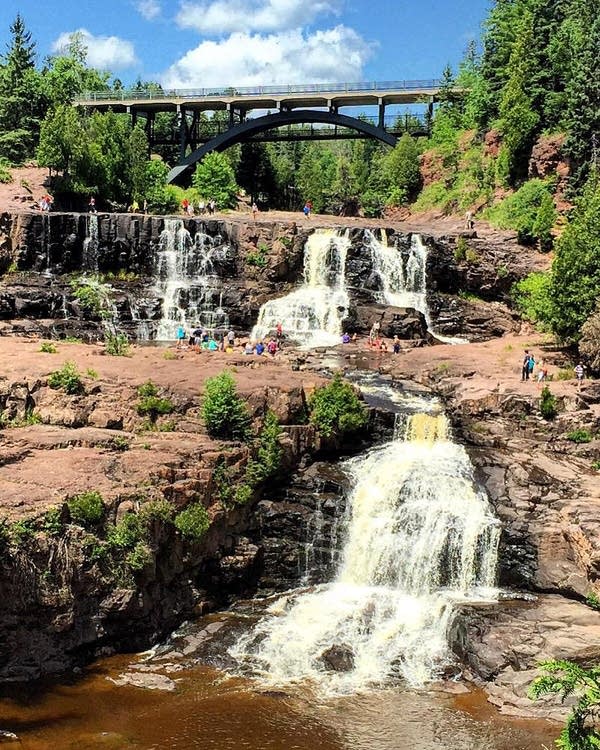 "I'd say that our day use has increased by two to three times the amount we typically see on weekends," said Clarissa Payne, the park manager. "We have a waterfall, so that's a pretty big attraction here — and the river. So mostly [people are] hiking, [using the] picnic area, just getting out and enjoying outside."

The park managers said that, so far, the extra visitors aren't really creating health or safety problems. Signs remind people to follow social distancing guidelines, even when they're outside, to avoid spreading the coronavirus.

Foshay said they're also encouraging visitors to come with their own supplies, because park offices aren't open during regular hours.

"We're asking campers and visitors to try to be self-contained if they can,” she said. “You know, bring up all the food you may need, bring up your hand sanitizer."

Another tip for state park visits this weekend, she said: Buy a state park permit online ahead of time, to avoid waiting in line.

State and federal officials are warning of high fire danger in northeastern Minnesota this holiday weekend.

Recent heavy rains in other parts of the state have mostly bypassed the state’s far northeastern Arrowhead Region. All of northeastern Minnesota remains in abnormally dry or moderate drought conditions.

"Right now, we're getting to the point where we're pretty critically dry up here in much of northeastern Minnesota — the whole Arrowhead region,” said Aaron Mielke, fire program forester with the Minnesota Department of Natural Resources

Forest officials say those conditions are similar to what they were in 2011. That's the year the Pagami Creek fire burned nearly 100 thousand acres in the Boundary Waters.

The Superior National Forest has banned campfires, except at a limited number of developed campgrounds. Fires in the Boundary Waters are not allowed.

“We've been lacking significant precipitation all spring, kind of been limping by. And it's really caught up to us here in June," said Mielke, who is based in Grand Marais.

Campfires are allowed elsewhere, but officials warn that an unintentional spark in these dry conditions could ignite a wildfire. Mielke advises visitors who light fires in places where they’re allowed not to leave it, ensure they have cleared brush around the fire and confirm that the fire has died before they leave the area.

So far this year, escaped campfires and fireworks have caused more than 40 wildfires in Minnesota.

To hear an audio report on this story and see related articles, follow this link to the MPR News website. https://www.mprnews.org/story/2020/07/03/holiday-weekend-brings-streams-of-visitors-to-state-parks-f...