A man wearing mask walks with his dog on in May in Minneapolis.
Kerem Yücel for MPR News file

According to the Minnesota Department of Health’s daily COVID-19 data release, eight more people have died of the disease in the state, continuing a trend since mid-June of daily death numbers in the teens or single digits.

The count of people currently hospitalized has gone down slightly to 270, but the number needing intensive care rose slightly to 132. Despite the jump in cases reported this week, overall hospitalizations have trended downward over the past few weeks.

Minnesota now has confirmed 37,624 positive tests for the disease during the outbreak. About 86 percent of those testing positive have recovered to the point they no longer need to be isolated.

Among those who’ve died in Minnesota, nearly 80 percent were living in long-term care or assisted living facilities, and nearly all had underlying health problems.

Because of the Fourth of July holiday, the state health department will not release its otherwise-daily COVID-19 update on Saturday.

‘Don’t let your guard down’ this July Fourth

The newest counts come as officials plead with Minnesotans to keep their guard up and follow public health guidelines over the July Fourth holiday weekend. Health officials this week warned that family gatherings and other outings could lead to a spike if people ease back from safety measures.

Health Commissioner Jan Malcolm and others are imploring groups gathering over the Fourth of July to meet outdoors instead of inside and to wear masks and social distance even when outside in order to minimize the risk of spreading the virus.

Young adults are a particular concern. Minnesotans in their 20s now make up the largest age group of confirmed cases — nearly 8,000 since the pandemic began. The median age for cases has been dipping and is now just under 39 years old, Malcolm noted earlier this week as she cautioned young adults to not let their guard down.

“Remember that you’re not invincible and neither are your loved ones,” she said.

Malcolm on Wednesday reiterated that the governor is “very seriously considering” a mask requirement and that she and other state health experts would support that move.

Officials on Wednesday also confirmed 13 cases of Minnesota children diagnosed with multisystem inflammatory syndrome, a condition believed to be related to COVID-19 that’s proven to be deadly in New York.

While the disease has not killed a Minnesota child, it sent eight of the 13 to intensive care, state epidemiologist Dr. Ruth Lynfield. The children developed symptoms between mid-May and mid-June; their average age was 5, and most had no prior medical problems, she said.

And as health officials warned of this mysterious new condition, cautioned Minnesotans to brace for an ongoing coexistence with COVID-19. Even when the COVID-19 pandemic reaches a “herd immunity” stage, research is indicating that immunity is not going to be as long-lasting as, say, measles.

COVID-19 immunity “may last for a period of months to a couple of years,” Lynfield said Wednesday.

That includes Mower County in southeastern Minnesota, where there were 932 confirmed cases as of Thursday. 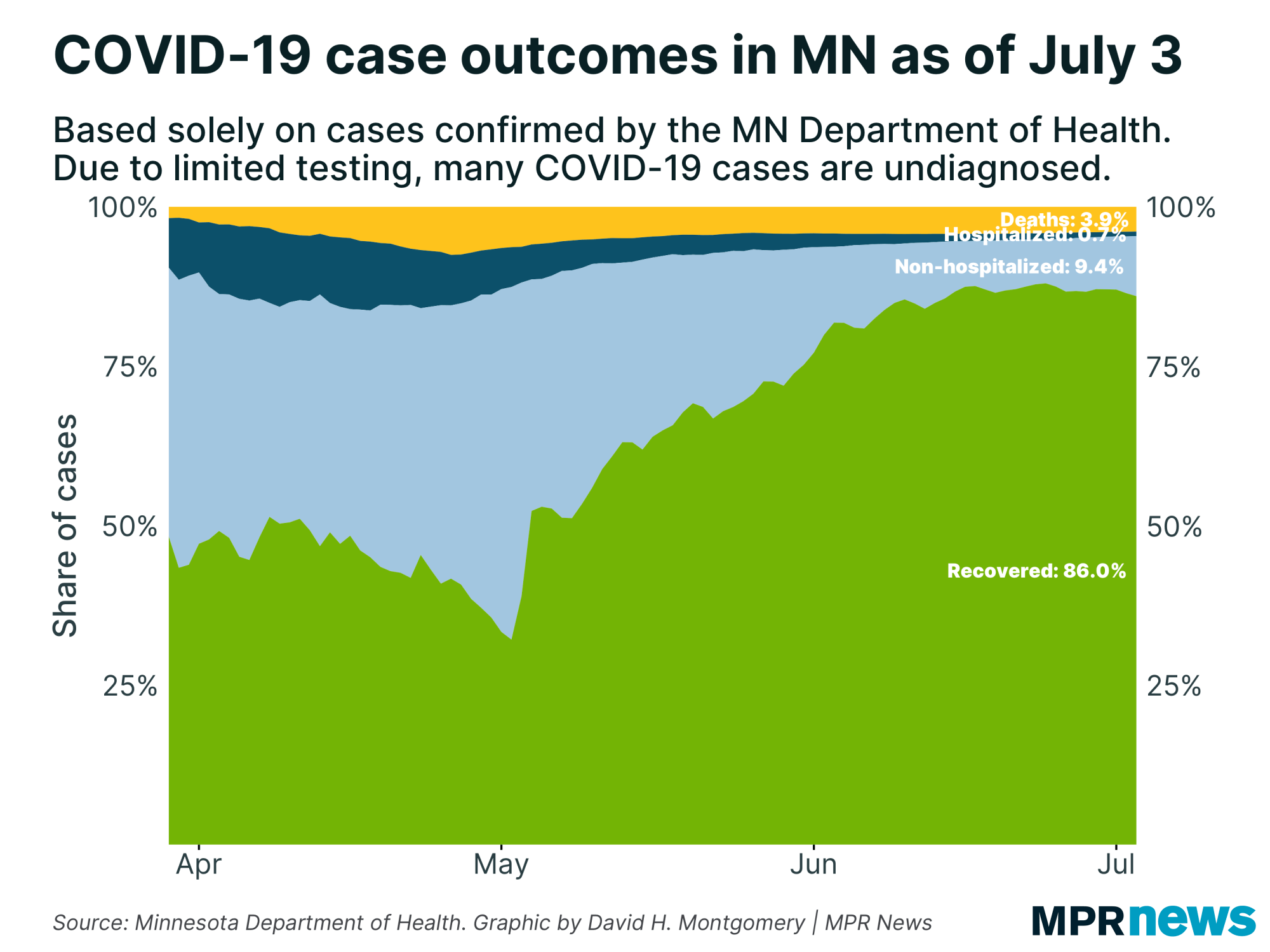 Nobles, in southwestern Minnesota, reported 1,661 confirmed cases Thursday. About 1 in 13 people now have tested positive for COVID-19 in the county since the pandemic began, although the count of new cases has slowed considerably in recent weeks.

An undisclosed number of workers at both plants have tested positive for the virus. There were about 55 confirmed cases in Stearns County in early May. By Thursday, confirmed cases were at 2,312 with 19 deaths.

As of Thursday, the Health Department reported 566 people have now tested positive in the county. The county had confirmed three COVID-19 cases in late April.

Cases have also climbed noticeably in Cottonwood County (134 cases), home to a pork processing plant in Windom, and in Lyon County (305 cases), around a turkey processor in Marshall.

Malcolm said Monday there are likely more than 200 positive cases in Mankato and at least 100 in Minneapolis tied to bar-hopping outbreaks, an increase from past estimates. 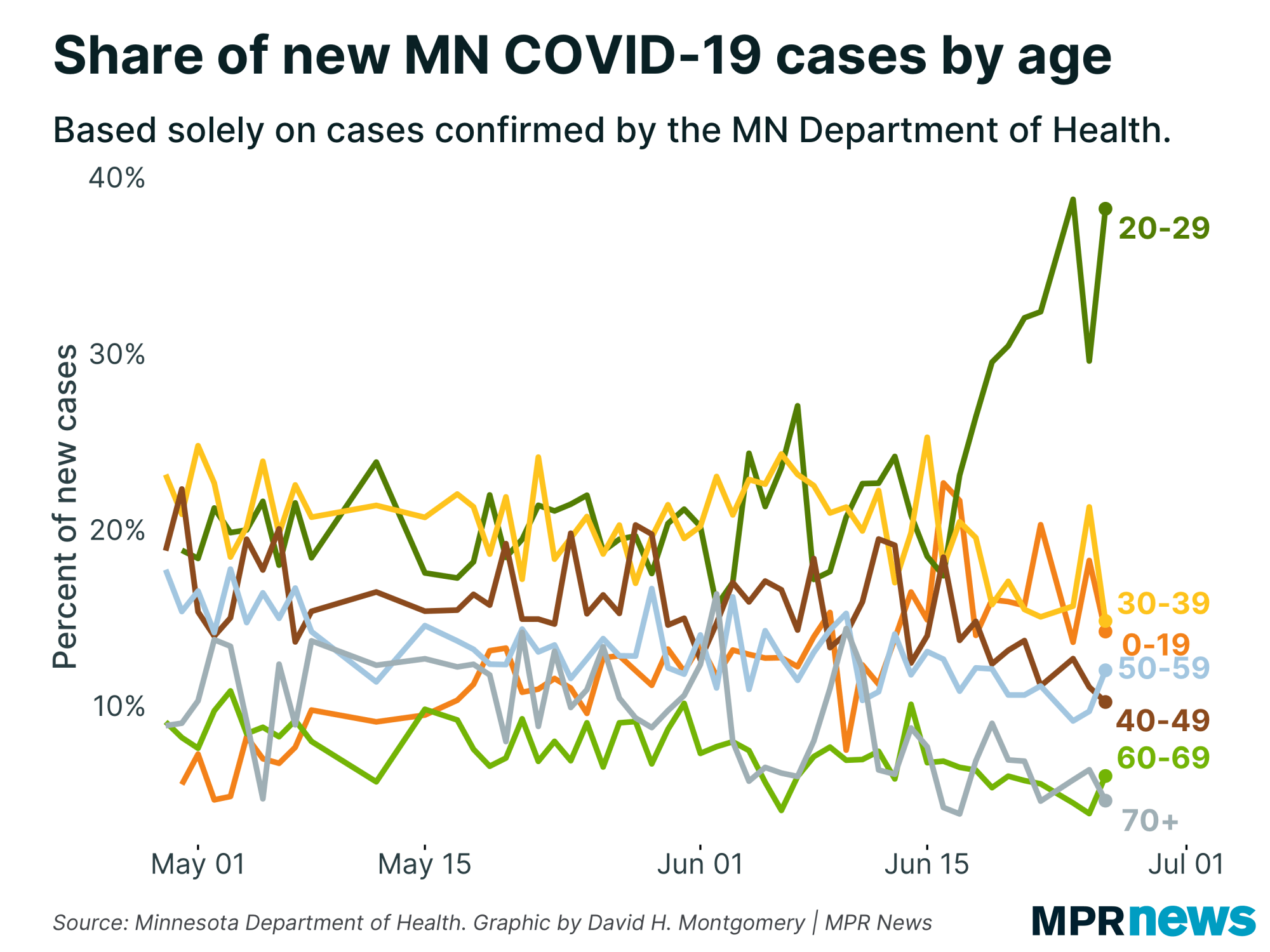 “These are not just suggestions,” Malcolm said of the rules in bars and public spaces.

Officials also note cases in Stearns County, where state officials are investigating a cluster of 18-26 year olds who appear to have gotten the virus at a bar. At least 47 cases have been connected to the Pickled Loon in St. Cloud.

Advocates are again demanding that the Minnesota Department of Corrections release nonviolent prisoners due to the pandemic.

Stephanie Brown, who leads the group Decarcerate Minnesota Coalition, said many prisoners have already served time for their original crime, but were sent back to prison for breaking minor rules of probation, like being late to work. The coalition has been lobbying the state for a year, hoping to free prisoners currently held on technical violations.

Now with COVID-19, Brown said that the health of prisoners who shouldn’t even be incarcerated is being ignored and that state officials have acknowledged the problem, but won’t do anything about it.

“That’s what we’re hearing from prisoners who are talking about unsafe and unsanitary conditions. Prisoners are being forced to go back to work,” Brown said. “They’re just seeing this urge to pretend like everything’s fine.”

COVID-19 has prompted the early release of some prisoners, but Brown said it’s not nearly enough. The organization plans to protest outside the the Corrections Department Thursday afternoon.

HealthPartners is making changes to a number of clinics and facilities in the wake of the COVID-19 crisis, including behavioral health care and substance use.

Six clinics that were shut down during the crisis will not reopen. Clinicians will see patients at other facilities. And the behavioral health clinic in Maplewood, an inpatient substance use program at Regions Hospital, and a clinic in Sartell will also close permanently.

For now, patients will continue to get care through telehealth and telephone. When in-person visits start up again, patients will see their providers at other sites.

A brief guide to a socially distanced Independence Day in Minnesota: Independence Day doesn’t have to change completely despite the pandemic. Here are a few locations that plan to host events, from virtual to social distanced, and some safety reminders on fireworks.

Minnesota health officials back statewide mask mandate:Health experts are urging Gov. Tim Walz to require people to wear masks in public statewide amid concerns that the spike in coronavirus cases elsewhere could happen in Minnesota.

To read all of the original stories and see related COVID-19 reporting, follow this link to the MPR News website.  https://www.mprnews.org/story/2020/07/03/latest-on-covid19-in-mn