The Campaign to Save the Boundary Waters announced in a news release Wednesday it was filing a lawsuit under the Minnesota Environmental Rights Act asking a judge to order the Minnesota Department of Natural Resources "to initiate a public process to amend state non-ferrous mining rules that would fully protect the water and air quality, wilderness character and other irreplaceable natural resources of the Boundary Waters" and "to prohibit sulfide-ore copper mining and related surface disturbance in the Rainy River-Headwaters."

If successful, the rule change would effectively kill Twin Metals' proposed underground copper-nickel mine, processing plant and tailings storage facility along Birch Lake, which flows into the BWCAW via the Kawishiwi River. 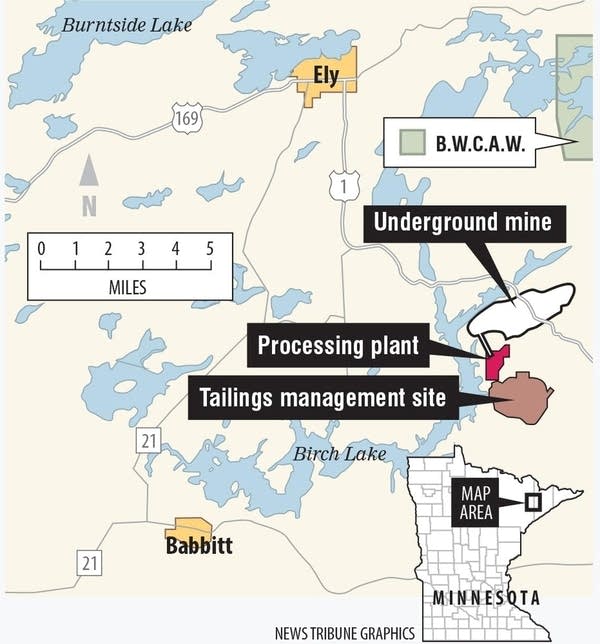 Save the Boundary Waters Executive Director Tom Landwehr, who served as DNR commissioner for eight years under former Gov. Mark Dayton, told the News Tribune that the rules, written in 1993, were outdated and untested.

"At the time, that was viewed as sufficient to protect the Boundary Waters," but today, Landwehr said, more is known about species, water pollution and the effect of sulfates and mercury in sediments.

While state law is written by the Minnesota Legislature, it's up to state agencies to write rules to implement those laws.

The rules currently require mining stay outside a quarter-mile buffer from the Boundary Waters' edge, but Landwehr said it's time to ban copper-nickel mining within the entire Rainy River Watershed because any pollution in that watershed will flow into the BWCAW.

In January, U.S. Rep. Betty McCollum, D-St. Paul, introduced a bill that would ban mining on 220,000 acres of the Superior National Forest in the Rainy River Watershed, a move that would also kill the Twin Metals project if passed. While that bill would only affect federal land, Landwehr said state rule changes could ban mining within the entire watershed in Minnesota, federal land included.

Twin Metals declined to comment on the lawsuit Wednesday.

Frank Ongaro, executive director of Mining Minnesota, which advocates for copper-nickel mining, said he opposes the rule changes and said the state and federal government's environmental review of Twin Metals is the "best imaginable study" because it looks at the effects of a specific project proposal.

"Simply put, another desperate attempt at prohibiting mining and delaying any projects," Ongaro told the News Tribune. "The rules are thorough; they are comprehensive; they're protective; they're enforceable; and they don't discriminate. They already fully protect all watersheds, including the Rainy River Watershed."

The DNR is in the first phase of an environmental review of Twin Metals as the agency prepares the scoping environmental assessment worksheet and draft scoping decision — a process that could take years.

Minnesota's non-ferrous mining rules have only been used to approve one project: the PolyMet copper-nickel mine, which sits outside the Rainy River Watershed and in the St. Louis River Watershed that flows into Lake Superior. PolyMet is not up and running as it faces numerous legal challenges to its permits, and Landwehr noted the state rules have never overseen an operational copper-nickel mine.

Landwehr approved PolyMet in his final months as DNR commissioner in November 2019. Asked if he wished he would have initiated the rule change to keep copper-nickel mining outside the BWCAW's watershed while he was DNR commissioner, Landwehr said it wouldn't have been appropriate.

"It would have been really problematic to bring up a rule revision while we were investigating a project, so I don't think we honestly could have at that point," Landwehr said.

The DNR did not immediately respond to the News Tribune's request for comment on the lawsuit.

The DNR is seeking additional information from Twin Metals as it prepares scoping on the environmental assessment worksheet for the proposed mine, which will identify the "project's potentially significant impacts warranting detailed analysis" and "propose alternatives, necessary studies and additional data needs."

In a letter dated June 15 posted to the DNR website, the agency wrote: "DNR has determined the initial submittal to be incomplete," and listed almost 800 comments seeking clarifications and additional information from Twin Metals.

Twin Metals spokesperson Kathy Graul said the letter is a routine part of the regulatory process.

"It is a normal part of the process for a project proposer to receive comments related to an initial data submittal," Graul said in an emailed statement to the News Tribune. "Twin Metals will be working through the comments and providing responses in the coming weeks, which will assist the DNR in its scoping process ahead of environmental review."

The DNR did not immediately respond to the News Tribune's request for comment on the letter.

To read the original article and see related reporting, follow this link to the MPR News website. https://www.mprnews.org/story/2020/06/25/duluth-news-tribune-new-lawsuit-targets-minnesotas-copperni...
Outdoors