A sign directs people toward COVID-19 testing at the National Guard Armory in Minneapolis in May 23. Minnesota officials said on Wednesday that they are concerned that many people — especially young adults — aren’t doing enough to help minimize the spread of COVID-19 as they return to social spaces. Photo: Evan Frost | MPR News file

Despite some hopeful trends in COVID-19 hospitalizations and deaths, Minnesota officials now worry that many people — especially young adults — aren’t doing enough to help minimize the spread of COVID-19 as they return to social spaces.

Minnesota’s now dealing with a virus cluster of roughly 100 cases in south-central Minnesota of people in their 20s who said they visited bars on June 12 and 13, Kris Ehresmann, the state’s infectious disease director, told reporters Wednesday. She didn’t say exactly where, or which bars.

While those young people may be less likely to suffer complications from COVID-19, the concern is that they may be inadvertently spreading the disease to grandparents or other vulnerable populations.

Ehresmann implored all Minnesotans to wear masks and keep their distance from others while in indoor social spaces. “I don't want to suggest that we don’t want people to have fun. The concern is if there’s crowding.”

The trends, though, continue to show a slowing death rate. Wednesday marked the first time since mid-April that the state reported four consecutive days of deaths in the single digits. 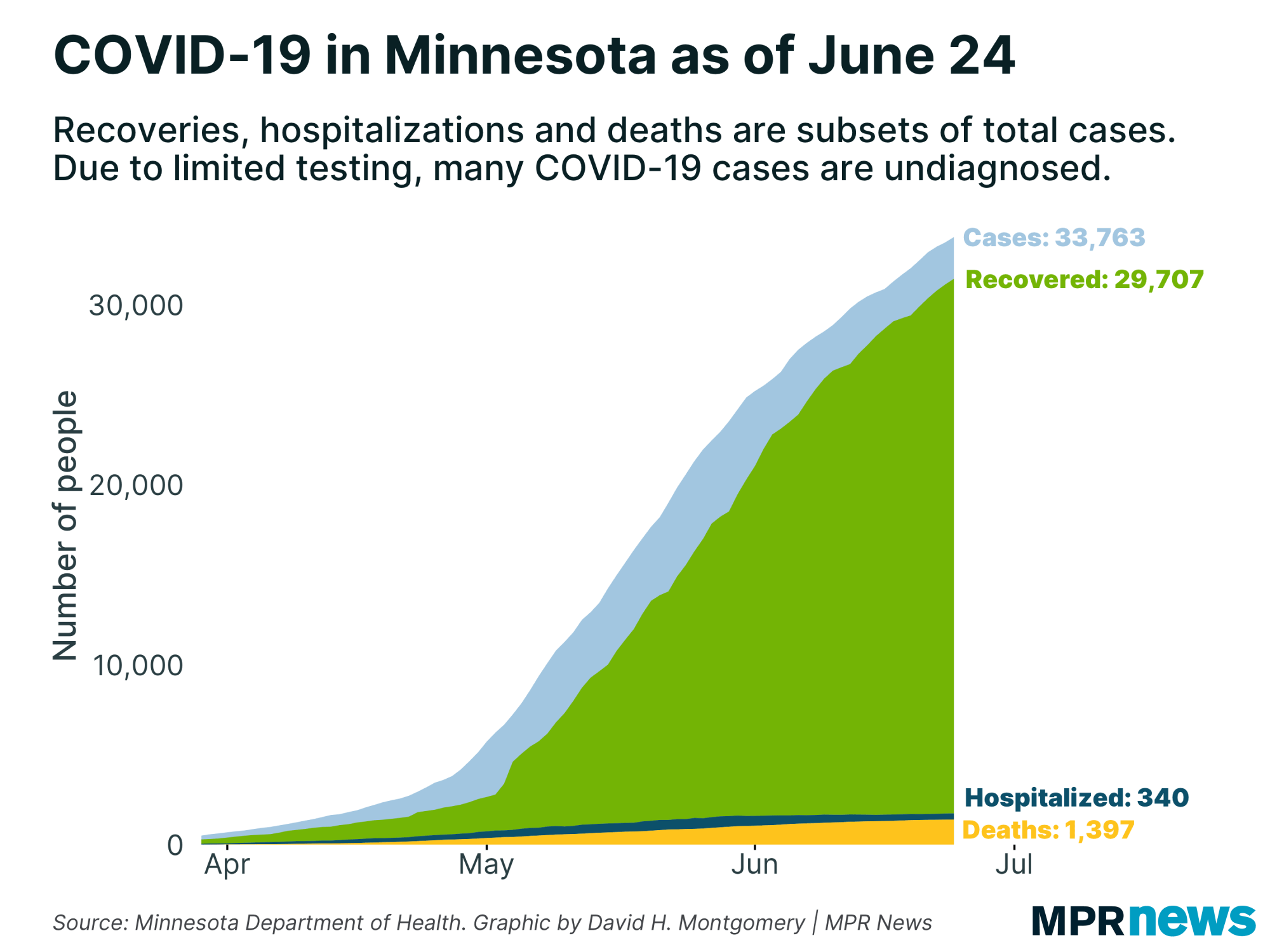 The counts of people currently hospitalized (340) and needing intensive care (160) — two closely watched metrics as officials try to manage the spread of the disease — stayed roughly stable but still showed an overall downward trend the past few weeks.

Of the 33,763 confirmed cases of COVID-19 since the outbreak began, state officials say about 88 percent of those infected have recovered to the point they no longer need to be isolated.

Among those who’ve died, nearly 80 percent were living in long-term care or assisted living facilities; nearly all had underlying health problems.

State officials have been encouraging people who participated in protests following the killing of George Floyd to get tested for COVID-19. The Health Department has offered free testing in Minneapolis and St. Paul the past two weeks.

While officials have been encouraged that positive cases are running less than 2 percent — suggesting that a rapid spread of the disease stemming from the protests is not happening in a way officials had feared — the testing has revealed some stark racial disparities.

Ehresmann said results of two weeks of that testing showed wide differences in the rates of positive results for COVID-19. She said the positive rate for whites was 0.2 percent, but it was 1.3 percent for Blacks, 7.4 percent for Latino populations and 5 percent for people of Asian heritage.

Ehresmann said the data reinforces her agency’s concern over racial disparities "due to differences in rates of underlying health conditions and job exposure risk."

It’s especially worrisome for people who might be suffering heart attacks, strokes or low blood sugar, Ehresmann said earlier in the week. She cited national data showing double-digit percentage drops in emergency room visits compared to the weeks before it hit the United States.

Officials at North Memorial Health Hospital in Robbinsdale have seen drops across the board, including for heart attacks and strokes. 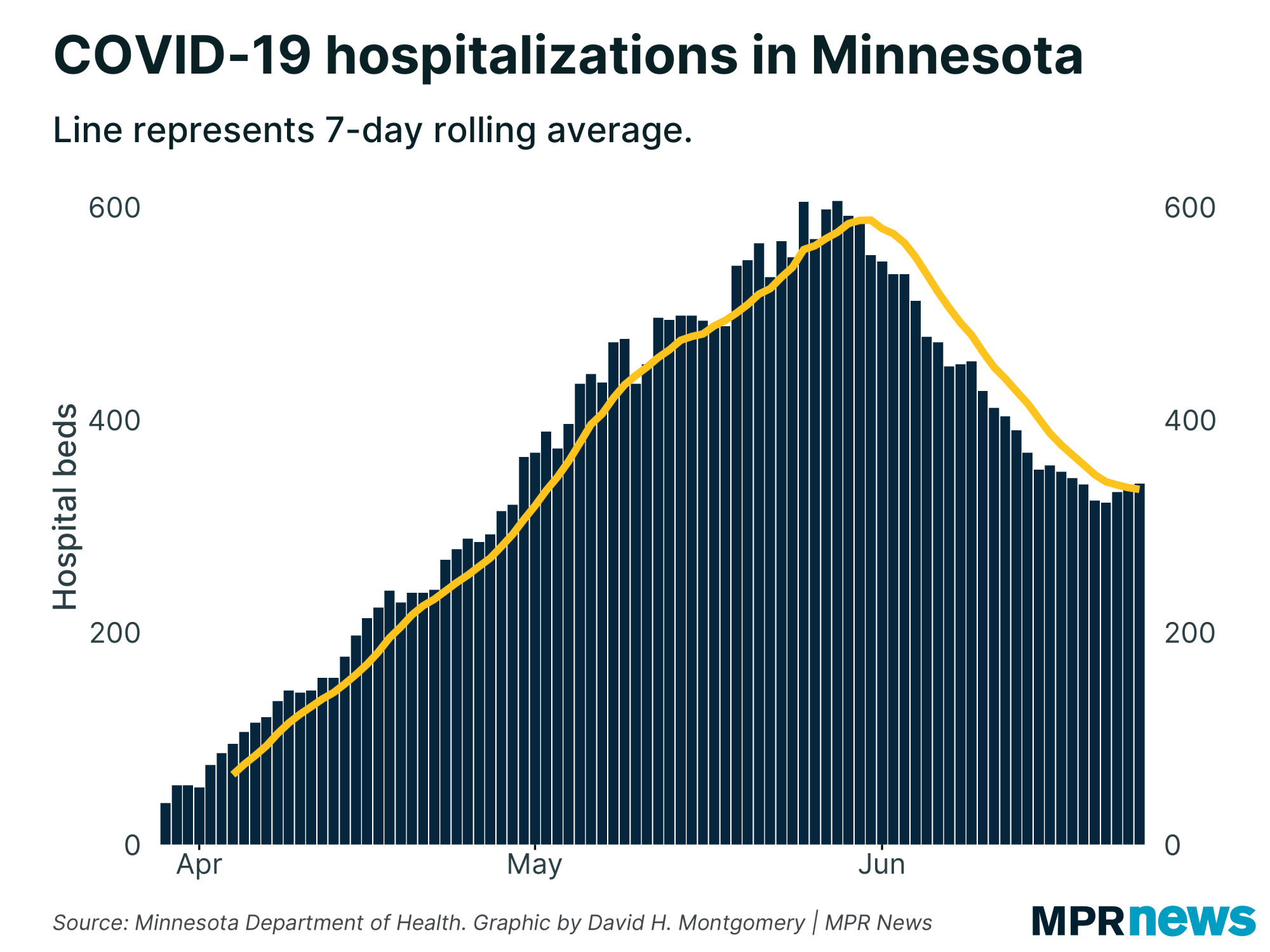 “When we look at Children's in terms of total doses, we'll give between 800 and 1,000 infant vaccines a month. And during the pandemic, we dropped down to right around 400, or less than 400 a month,” said Patsy Stinchfield, a pediatric nurse practitioner in infectious disease at Children’s. 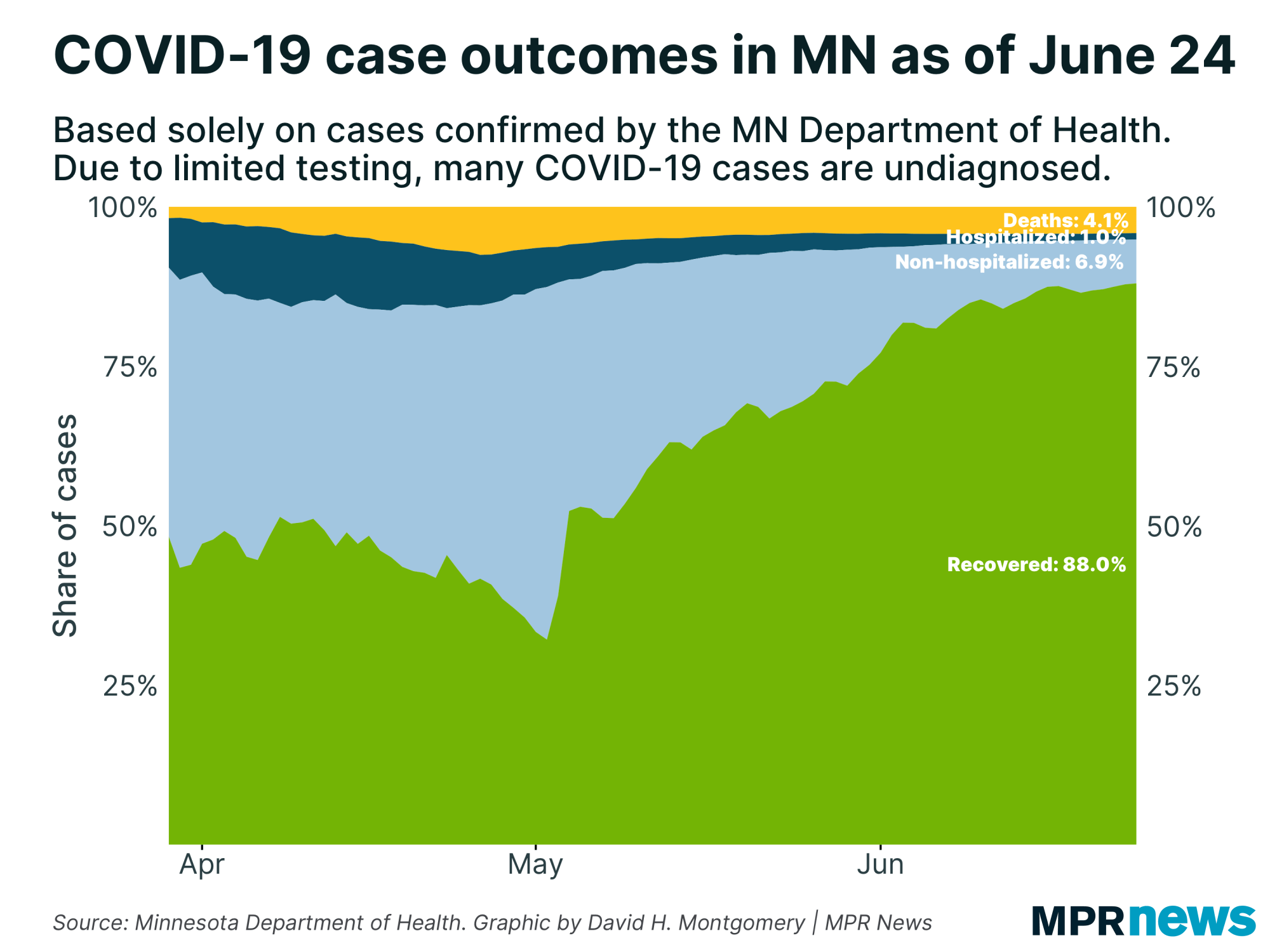 That includes Mower County in southeastern Minnesota, where there were 828 confirmed cases as of Wednesday.

Nobles, in southwestern Minnesota, reported 1,635 confirmed cases Wednesday. About 1 in 14 people now have tested positive for COVID-19 in the county, although there have only been a few additional cases recorded the past few days.

An undisclosed number of workers at both plants have tested positive for the virus. There were about 55 confirmed cases in Stearns County in early May. By Tuesday, confirmed cases were at 2,140 with 19 deaths.

As of Wednesday, the Health Department reported 561 people have now tested positive in the county, the same as Tuesday.

Cases have also climbed noticeably in Cottonwood County (126 cases), home to a pork processing plant in Windom, and in Lyon County (279 cases), around a turkey processor in Marshall.

Masks to be required at St. Cloud State University this fall

St. Cloud State University will require masks to be worn in its campus buildings this fall.

The university announced this week it will require face coverings for all students, faculty and staff in its buildings at least for fall semester beginning Aug. 24. St. Cloud State will offer a mix of in-person and online classes this fall.

Jennifer Super, director of the school’s emergency preparedness and transportation services, said the decision should provide some clarity and comfort for people returning to campus this fall.

"I think it provided answers for people that were asking — ‘Are we going to make [masks] mandatory?’” Super said. "It sets the tone for the fall that our students and employees' safety is No. 1.”

Super said details are still being worked out, but the policy likely will apply to buildings, classrooms, shared office spaces and outdoor areas where it's difficult to practice social distancing.

St. Cloud State's approach differs from the University of Minnesota, which is strongly recommending but not requiring masks.

Twin Cities Marathon canceled over COVID-19: The marathon’s organizer, Twin Cities in Motion, says it is making all its running events virtual, including the approaching Red White and Boom 5K, relay and half-marathon scheduled for the Fourth of July.

To read the original stories and see more COVID-19 reporting, follow this link to the MPR News website.  https://www.mprnews.org/story/2020/06/24/latest-on-covid19-in-mn