Fry bread is a flat dough bread, deep-fried in oil, shortening, or lard, that can be eaten plain or with various toppings. Photo: Leonard Dick/Facebook 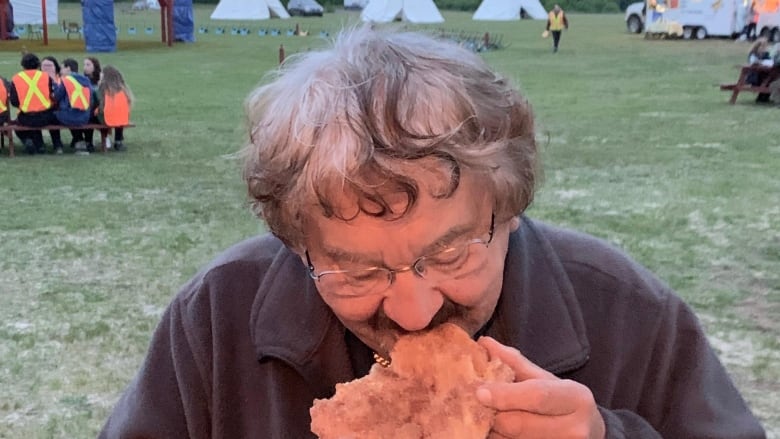 For Indigenous comedian Moccasin Joe, fry bread is much more than a tasty treat.

The comedian, whose real name is Leonard Dick, has used the Indigenous delicacy to supplement his comedy, bringing smiles to people's faces through food.

"I was at a northern [Saskatchewan] event, and one of my friends was there," Dick told CBC News. "I actually was eating this fry bread, and he sang me a little song about fry bread."

"I picked it up," he said. "On Facebook, they call me the ... 'the fry bread playboy'. So it kind of stuck with me, and every time I do a little writing or stuff like that, I always include fry bread."

"It makes people, believe it or not, bring out a smile in their little faces to know that we're just doing that. I'd be dead now if I ate all the fry bread that I was talking about, but I enjoy a fry bread once in a while."

Fry bread is essentially a flat dough bread, fried in oil, shortening, or lard, that can be eaten plain, or with toppings like jam or sugar.

And it's become a big part of Moccasin Joe, Dick said.

"Wherever I travel, people make it for me, believe it or not," he said. "It's just something I've done."

"I'm always seeking fry bread. You'll probably read it in my writings, or you'll see that on my Facebook."

Dick said fry bread has helped him connect with others through comedy.

"That's what humour is all about," he said. "One of the good things about sharing this gift with people, in a good way, it makes them feel good about themselves."

To read the original article and see related stories, follow this link to the CBC Thunder Bay website.  https://www.cbc.ca/news/canada/thunder-bay/fry-bread-playboy-1.5620922