Lake of the Woods: The Minnesota county COVID-19 has (so far) forgotten COVID-19 has spread across nearly the entire state of Minnesota. But Lake of the Woods County, where Baudette is located, is the only county in the state where there are no confirmed cases.  Photo: John Enger | MPR News 2014

Rick Blodgett has a lot of theories about why nobody in Lake of the Woods County has tested positive yet for the coronavirus. Theory No. 1: Far Northern Minnesotans are just tougher people.

“When I was a kid, we used to sleep with the window open,” he said. “It might be 20 below. We’d just pile the blankets. Are we heartier? I don’t know.”

He wishes that were the reason. It would be something to brag about. But it’s probably not why there aren’t any COVID-19 cases in his county yet. Lots of people have tested positive for the disease in other northern communities — Cook County, the other longtime holdout, just recorded its first COVID-19 case this week — and presumably some of those people once slept with their windows open, too. Besides, there’s no research to suggest that “hearty” makes a difference when it comes to getting a COVID-19 diagnosis. 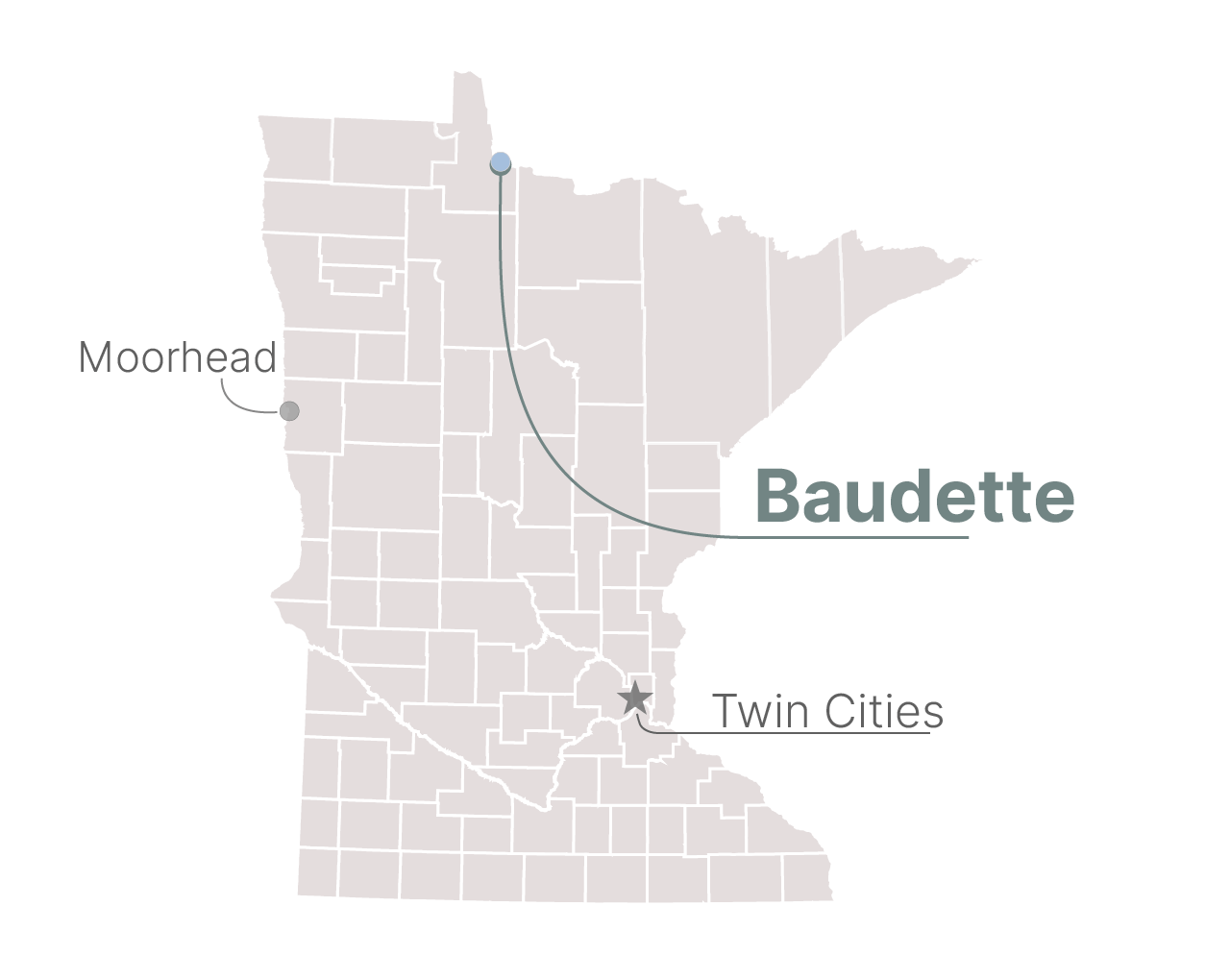 Another theory? Maybe people who live in Baudette, Minn., where he runs the local Hardware Hank store, are just much better at taking the recommended coronavirus precautions than the rest of the state — the rest of the country, for that matter.

But: Blodgett isn’t wearing a mask these days — and, he said, neither are any of his employees, or the vast majority of his customers. So prevention probably isn’t it, either.

“I think it’s more luck than anything else,” he said.

Luck might have something to do with it but according to state infectious disease director Kris Ehresmann, the lack of COVID-19 cases in Lake of the Woods County has more to do with geography and population than being lucky.

Places like New York City were hit hard by the highly infectious disease, she said, in part because the people there live tightly packed together, with a high population density.

Lake of the Woods County, on the other hand, is the second least-populated county in the state of Minnesota, just before Traverse County. There are fewer than 4,000 people, spread out over more than 1,000 square miles. It is the opposite of New York City. And at least when it comes to the transmission of a disease like COVID-19, all of that space and distance is an advantage.

Some communities have low numbers of COVID-19 cases, because they’re not doing much — or any — testing for the disease. But according to the state Health Department, Baudette’s LakeWood Health Center, the county’s only COVID-19 testing site, has tested 69 people. All of those people tested negative for the virus. Ehresmann said that even though it’s not a huge testing program, adequate for the county’s population.

It’s still possible that a few people in the county have — or have had —  the disease, but without symptoms, and haven’t been tested.

But three-plus months into the coronavirus’ spread across Minnesota, Lake of the Woods County has dodged COVID-19. And Blodgett said he thinks people from elsewhere in the state are beginning to take notice. He even thinks some are heading there to seek refuge.

“I’m seeing a lot of people I’ve never seen before,” he said. “You can tell by their questions and what they’re buying that they just bought a piece of property and just moved in.”

He’s sold a lot of paint and air conditioning units lately — likely new house purchases, he said. He’s copied a lot of door keys for people. It’s a small community, and Blodgett knows just about everyone. He said he thinks these newcomers have bought cabins in the area to get away from the virus.

So far, they haven’t brought COVID-19 with them — at least, not yet. But as the county’s big resorts, which line the Rainy River and Lake of the Woods, reopen, and as more and more tourists and anglers pack their trucks and drive north, the odds that they’ll carry the virus along, however unwittingly, grow by the day.

That’s something County Commissioner Buck Nordlof has grappled with for weeks. Tourism is Lake of the Woods County’s largest industry by far. He’s cautiously optimistic that the state’s recommended disinfecting and social distancing protocols will protect his community. But if they don’t, he worries that the county with no cases could soon have too many to handle.

Compounding that worry: Its population is aging, and therefore more vulnerable to the most severe effects of the disease.

“We don’t have the health care resources,” he said. “We don’t have a ventilator. If we had a case here that required more than just hospitalization, they’d have to be shipped to Bemidji or Grand Forks.”

The system, he said, isn’t built for pandemics.

Ehresmann and her colleagues at the state Health Department continue to warn Minnesotans that the state will be dealing with COVID-19 well into the fall.

But for people who live in a place where there are no confirmed cases, that can be hard to accept. It’s hard to wear a mask into Hardware Hank when nobody’s sick — and when nobody else is wearing one, either.

It’s hard not to get overconfident, to rely on the hundreds of miles of sparsely populated forest that’s provided such good protection so far. But Ehresmann said that isolation won’t last, now that tourism is coming back.

“Even if you live in the woods, you’re not out of the woods,” she said. “This is not over.”

And if you don’t live in the woods, and you feel sick, she said, don’t drive to Lake of the Woods. It would be a shame to mess with their perfect record.

To read the original article and see related reporting, follow this link to the MPR News website.  https://www.mprnews.org/story/2020/06/12/lake-of-the-woods-the-minnesota-county-covid19-has-so-far-f...