A Canadian barge loaded 3,622 metric tons of coal tar and 6,340 gallons of diesel fuel ran aground in the lower St. Marys River early Wednesday, and its owners are now working with the U.S. Coast Guard on plans to remove it.

The St Mary River is like a maritime highway for freighters, barges and other vessels. It connects Lake Superior and the Soo Locks to water traffic heading south to Lake Huron.

Wednesday’s grounding happened about 12:30 a.m. near Sweets Point, which is north of DeTour Village along the eastern edge of the Upper Peninsula.

The 302-foot barge, identified as PML2501, is owned by Purvis Marine, which is working on the salvage plan, Coast Guard officials at Sector Sault Ste. Marie said.

“Coast Guard marine casualty investigators and pollution responders are on scene to investigate the incident and ensure proper mitigation of potential negative impacts to the environment,” local Coast Guard officials said Wednesday. “A Coast Guard helicopter from Air Station Traverse City conducted an overflight of the area and did not identify any release of pollution from the barge. The barge has taken on water in a ballast tank and is currently stable. There is no report or identification of pollution at this time.”

Coast Guard personnel established a safety zone around the barge, which means other vessels have to stay 500 yards away from it.

At the time it ran aground, the barge was under tow by the 132-foot Anglian Lady, also a Canadian vessel. The duo had last been in Sault Sainte Marie, Ontario, and were heading south to Burns Harbor, Indiana, when the incident occurred.

What caused the grounding remains under investigation. 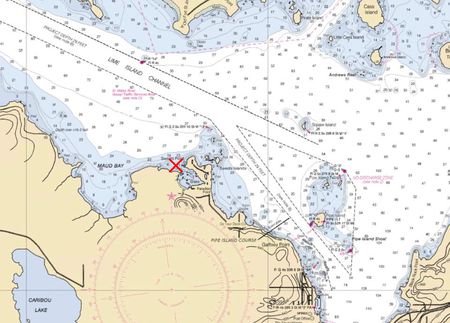 A barge ran aground in the lower St. Marys River near Sweets Point. Map courtesy of the U.S. Coast Guard.

To read the original story and see related reporting, follow this link to the mlive.com website: https://www.mlive.com/news/2020/06/barge-loaded-with-diesel-fuel-and-coal-tar-runs-aground-near-uppe...