Christine Taylor, who lives in Washington state, talks to her mother Marika Markovic, who lives in B.C, at the Canada/USA border in Surrey, British Columbia on Thursday, April 23, 2020. Photo: Ben Nelms/CBC

Canadians separated from family members in the U.S. because of restrictions around the border will soon have some respite, as Prime Minister Justin Trudeau announced on Monday that exemptions will be provided to immediate families members.

"We are bringing in a limited exemption to allow immediate family members of citizens or permanent residents to come to Canada," Prime Minister Justin Trudeau said Monday during his morning news conference.

The Canada Border Services Agency said the exemption will kick in at midnight on Monday, and applies to foreign nationals who are immediate family members of Canadian citizens and permanent residents and who do not have COVID-19 or are showing any signs or symptoms of COVID-19, "or who do not have reason to believe they have COVID-19."

Anyone who enters the country will have to self-quarantine for 14 days and could face serious penalties for not following the rules.

Christine Markovic, a Canadian who lives in Washington state, has been meeting her 81-year-old mother on Zero Avenue, the road running along the border, about once a week since the border was closed.

She said she was overcome by emotion when she saw the news, but upon reading the fine print, including the mandatory two-week quarantine period, grew frustrated.

"It is a step in the right direction but it's also symbolic. Nothing has really changed, except my husband can now come up," she said, explaining that he is American and was previously barred entirely.

But she said with her husband working, it's unlikely he'd be able to take two weeks off to quarantine upon arriving in Canada.

Markovic said her weekly meetings with her mother, where the two spoke, several feet apart and masked, were a relief. Before COVID-19 shuttered borders, she would often drive up to White Rock for visits. But she said the physically distanced conversations across an international border were also emotionally difficult.

"I'm standing there with this invisible line.  I can't hug my mom, and I'm looking into Canada going, there's my home and I can't come home," she said.

"I think that being Canadian, I should be able to come across. And if I have to get tested, I'll do that — I'll do whatever I have to do ... I just wish they would give a little more leeway to immediate family." 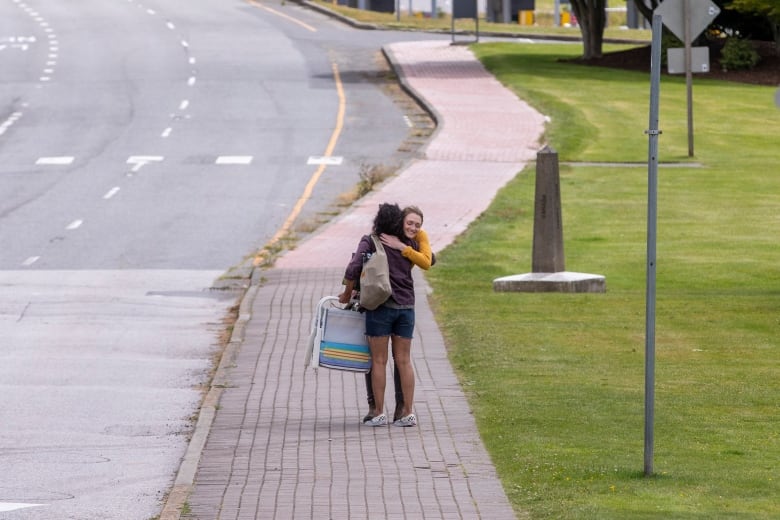 The government barred entry to most non-residents back in March. Canada also has a deal with the United States until at least June 21 to temporarily close the border to non-essential travel (meaning no recreational visits) while keeping it open to commercial traffic and essential workers.

In their Monday briefing, Health Minister Adrian Dix and Provincial Health Officer Dr. Bonnie Henry said Canadians must remain vigilant, as a number of areas of the U.S. heavily connected to B.C. continue to see surges of cases.

"People who are coming to see their family, the last thing they want is to bring this virus in and to affect the people that they are closest to," said Henry.

Through this exemption, the government is defining an 'immediate family member' as someone's:

To read the orignal article and see related stories, follow this link to the CBC News website.  https://www.cbc.ca/news/canada/british-columbia/relief-frustration-as-restrictions-on-u-s-canada-bor...